Read This is Not a Novel Online

This is Not a Novel 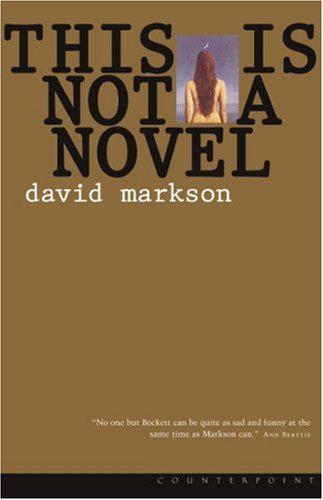 This is Not a Novel

For Toby and Duncan Freeman and Sydney Markson

I am now trying an Experiment

which is, to
write upon Nothing.

Writer is pretty much tempted to quit writing.

Writer is weary unto death of making up stories.

Lord Byron died of either rheumatic fever, or typhus, or uremia, or malaria.

Or was inadvertently murdered by his doctors, who had bled him incessantly.

Stephen Crane died of tuberculosis in 1900. Granted an ordinary modern life span, he would have lived well into World Warn.

This morning I walked to the place where the street-cleaners dump the rubbish. My God, it was beautiful. Says a van Gogh letter.

Bertolt Brecht died of a stroke. Terrified of being buried alive, he had pleaded that a stiletto be driven through his heart once he was declared legally dead. An attending physician did so.

Mr. Coleridge, do not cry. If opium really does you any good, and you must have it, why do you not go and get it? Asked Wilkie Collins’ mother.

When I was their age I could draw like Raphael. But it took me a lifetime to learn to draw like they do. Said Picasso at an exhibition of children’s art.

A novel with no intimation of story whatsoever, Writer would like to contrive.

And with no characters. None.

The Globe Theatre burned to the ground on June 29, 1613. Did any new play of Shakespeare’s, not yet in quarto publication, perhaps burn with it?

Albert Camus, on the one occasion when he was introduced to William Faulkner:

The man did not say three words to me.

Nietzsche died after a sequence of strokes. But his final illness, and his madness, were almost surely the result of syphilis.

W. H. Auden was once arrested for urinating in a public park in Barcelona.

Frans Hals was once arrested for beating his wife.

Yet seducing the reader into turning pages nonetheless.

No one was injured in the Globe Theatre calamity. One man’s breeches were set on fire, but it is on record that the flames were quenched with a tankard of ale.

When Dickens shocked Victorian London by separating from his wife, it was Thackeray who let slip that it was over an actress. Dickens did not speak to him for years.

Tell it not in Gath, publish it not in the streets of Askelon.

George Santayana, reading
Moby Dick:
In spite of much skipping, I have got stuck in the middle.

Thales of Miletus died at his seat while watching an athletic contest.

But I knew that Monsieur Beyle quite well, and you will never convince me that a trifler like him could have written masterpieces. Said Sainte-Beuve.

Which is to say, with no
sequence of events.

Which is to say, with no indicated
passage of time.

Then again, getting somewhere in spite of this.

The old wives’ tale, repeated by Socrates, that Thales was also frequently so preoccupied with gazing up at the stars that he once tumbled into a well.
And was even laughed at by washerwomen.

Oedipus gouges out his eyes, Jocasta hangs herself, both guiltless; the play has come to a harmonious conclusion. Wrote Schiller.

Verdi died of a stroke.

Indeed, with a beginning, a middle, and an end.

Even with a note of sadness at the end.

What is the use of being kind to a poor man? Asked Cicero.

Bertrand Russell was so inept, physically, that he could never learn to make a pot of tea.

Immanuel Kant could not manage to sharpen a quill pen with a penknife.

The sixth-century legend that St. Luke was a painter. And did a portrait of the Virgin Mary.

Which shattered in its case at his death.

Insistently, Brahms wore his pants too short. Sometimes actually taking a scissors to the bottoms.

A novel with no
setting.

With no so-called furniture.

Andre Gide died of a disease of the lungs. Rereading the
Aeneid
on his deathbed.

It was while they were making copies of the Masaccio frescoes in the Santa Maria del Carmine as young apprentices that Michelangelo criticized the draftsmanship of Pietro Torrigiano: Bone and cartilage went down like biscuit, Torrigiano would later tell Benvenuto Cellini.
Re
Michelangelo’s nose.

The greatest genius of our century, Goethe called Byron.

The greatest genius of our century, Byron called Goethe.

Ivan Turgenev, at nineteen, during a shipboard fire: Save me! I am my mother’s only son!

Catullus, who loved a woman he called Lesbia, but whose real name may have been Clodia.

Propertius, who loved a woman he called Cynthia, but whose real name may have been Hostia.

Both, two full thousand years ago.

A novel with no overriding central
motivations,
Writer wants.

Hence with no conflicts and /or confrontations, similarly.

One of the ennobling delights of Paradise, as promised by Thomas Aquinas:

Viewing the condemned as they are tortured and broiled below.

The friendship of Samuel Beckett and Alberto Gia-cometti.

Richard Strauss: Why do you have to write this way? You have talent.

Paul Hindemith: Herr Professor, you make your music and I’ll make mine.

Porto d’Ercole. Where Caravaggio died.
Most probably of malaria.
In a tavern.

With no social themes, i.e., no picture of society.

No depiction of contemporary manners and/or morals.

Categorically, with no politics.

Vulgar and dull, Ruskin dismissed Rembrandt as. Brother to Dostoievsky, Malraux called him.

For whatever reason, Jean Sibelius did not write a note in the last thirty years of his life.

Kierkegaard died of a lung infection. Or a disease of the spine.

That while the angels may play only Bach in praising God, among themselves they play Mozart.

Not to mention epilepsy.

Theophrastus said flute music would have cured that, also.

No one ever painted a woman’s backside better than Boucher, said Renoir.

A novel entirely without symbols.

Robert of Naples: Giotto, if I were you, in this hot weather I would leave off painting for a while. Giotto: So would I, assuredly—if I were you.

Matthew Arnold died of a heart attack while running for a streetcar in Liverpool.

Elizabeth I, visiting Cambridge University, delivered a lecture in Greek.

And then chatted less formally with students in Latin.

The likelihood that Anne Hathaway could not read.

The perhaps less than idle speculation that Columbus was a Jew.

Space is blue and birds fly through it. Said Werner Heisenberg.

Ultimately, a work of art without even a subject, Writer wants.

There is no work of art without a subject, said Ortega.

If you can do it, it ain’t bragging, said Dizzy Dean.

Xenocrates died after stumbling against a brass pot in the dark and cracking his skull.

Brunelleschi had a temporary restaurant and wine shop constructed in the highest reaches of the Florence cathedral while building his great cupola—so his workmen did not have to negotiate all that distance for lunch.

Maxim Gorky died of tuberculosis. Or was he ordered murdered by Stalin?

Baudelaire died after being paralyzed and deprived of speech by syphilis.

I was tired and ill. I stood looking out across the fjord. The sun was setting. The clouds were colored red. Like blood. I felt as though a scream went through nature. Said Edvard Munch.

Can only have been painted by a madman. Said Munch of the same canvas.

Pico della Mirandola, not yet thirty-one, died of an unidentified fever.

William Butler Yeats died of heart failure.
The day of his death was a dark cold day.

Lamb was in fact known to pretend surprise that people did not say grace before reading.

The solitary, melancholy life of Matthias Griinewald. Was he wholly sane?

Is Writer, thinking he can bring off what he has in mind?

And anticipating that he will have any readers?

There is only one person who has the right to criticize me, do you understand? And that is Picasso. Said Matisse late in life.

Arthur Koestler was an enemy alien in solitary confinement in a London prison at the beginning of World War II when
Darkness at Noon
was published.

Pope Joan, a.k.a. John VII, 855-858. Who died when taken by childbirth during a papal procession between St. Peter’s and St. John Lateran.

There is no mention of writing in the
Iliad.
Any and all messages are passed along verbally.

Black Hills Badman by Jon Sharpe
The Stars That Tremble by Kate McMurray
Caribes by Alberto Vázquez-Figueroa
Colors of Chaos by L. E. Modesitt
Delta Stevens 2: Storm Shelter by Linda Kay Silva
A Natural Father by Sarah Mayberry
Our Kind of Love by Victoria Purman
CALL MAMA by Terry H. Watson
The Hill: A Short Story (Voices of the Apocalypse Book 3) by Pond, Simone
The Critic by Peter May
Our partner