Read This Is Not Forgiveness Online

This Is Not Forgiveness 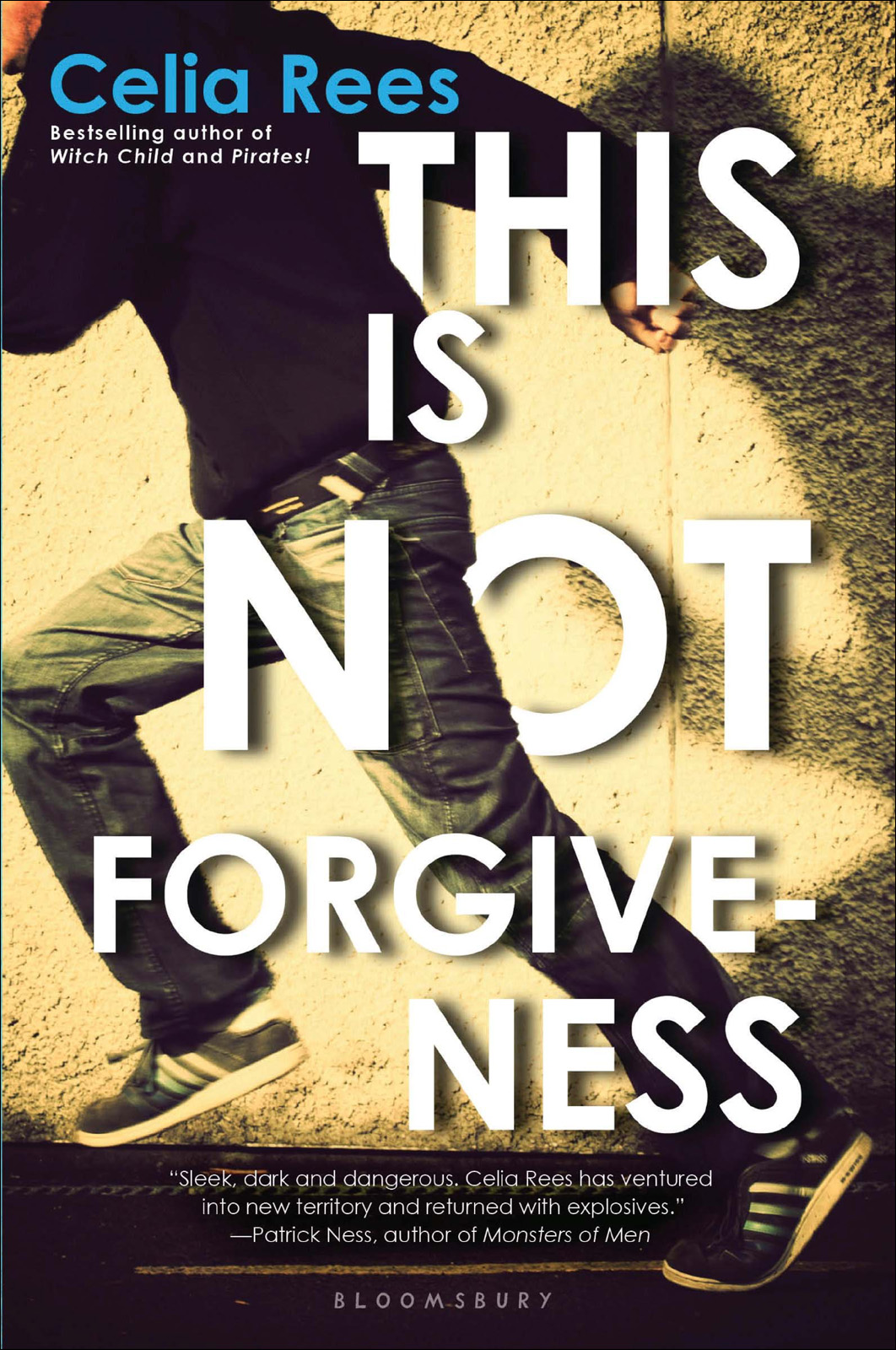 I can’t decide what to do with your ashes. It’s been nearly a year now. Almost summer again. The urn is sitting in front of me on the desk, brown plastic with a ref. number, the date and your name scribbled on a sticky label:

The label has black borders and is beginning to peel at the corners. I smooth the wrinkled paper, trying to stick it back. It has been slapped on crooked by someone who didn’t care a whole lot about the contents. There are all kinds of urns you can have: brass, copper, pewter, ceramic; you can have a wooden casket with engraving on it, but those cost and someone would have to care enough to order one and buy it. I guess yours is the modern equivalent of the pauper’s grave.

I went to the funerals. They held them one after another. I don’t think they meant them to be that way, but the crematorium was busy that day. Yours was second. Not much like the first. No orations, no weeping school mates clutching single blossoms to put on the coffin, sobbing out rubbish verses that they’d written themselves. No inky hand-printed notes on the flowers:
R.I.P.
,
C U in Heaven
,
Gone but not forgotten.
No flowers at all. Hardly anyone there, either. Only the bare minimum for decency. Police and immediate family. Some of your mates, but not many. Just Bryn and a few others, wearing uniform.

The priest was sweating. He kept dabbing at his forehead with a big white handkerchief and stumbling over his words, scratching about to find something to say, stringing it out until the time came for the rollers to engage. You would have pissed yourself. Nobody sang the hymn, there was just this tinny recording. Nobody cried or even looked sad. The congregation seemed relieved to see your coffin going, as if it wasn’t a body on its way to the furnace but some dangerous biohazard. They couldn’t wait to get out of there.

I was the one who went back to collect your ashes. That’s how I’ve got them here. Mum doesn’t like it. She keeps nagging about ‘disposal’ and ‘closure’. Keeping you here is morbid and probably unhealthy. I don’t see it. The Morgans had their granddad on the mantelpiece for years and years. She wants rid, but what’s it to do with her? You were my brother. She doesn’t have to come in here. ‘It’s upsetting for your sister,’ she says. I know for a fact that Martha couldn’t give a monkey’s fat one. Anyway, she’s not even here, so what does she care?

I can see Mum’s point of view. What you did was pretty disruptive. I had to move schools. I couldn’t go back there, could I? Mum wanted to move house. Move towns. After what happened, she wanted to make a fresh start. You’ve made the place toxic. But in the end, we didn’t do that. We’d have had to move Grandpa. Not that he’d notice. He’s still alive, just about, but Alzheimer’s doesn’t get better, does it?

It wasn’t really that, either. What happened has changed her. At times, she blames herself. Somehow it must be her fault, that’s what she thinks. If she’d just done this thing, or that thing, then it wouldn’t have happened. She spends a lot of time sitting around thinking about that. She’s there but not there when she’s like that. She moves from that to being very, very angry. Mostly with you.

Maybe getting rid of you would give us closure, as she puts it, but I don’t think so. The brown plastic kind of contains you. Without it, you’d be everywhere – like a genie. You don’t deserve to be liberated yet. I’ll decide the time and place. It could be tomorrow, it could be years from now, but until the day comes, you are staying right here, with me.

But this is not forgiveness. Don’t think that.

Over in Afghan lots of guys make some kind of statement before they go on ops – especially if there’s a chance they might not be coming back. They write an email or a letter or a crap poem – whatever. Or make a podcast – like this one.

I never did that. Asking for it in my opinion.

Now luck ain’t coming into it – I’m doing this because I don’t want no misunderstanding. I’m not like those sad-loner no-mates fucks against the world – there’s no chip on my shoulder. Don’t be looking to blame anyone – clean up the mess and get on with your lives.

I want you all to know I didn’t do it as some kind of personal declaration – I don’t have a message.

My only cause is me.

And I ain’t crazy. That’d be too easy.

Don’t look for reasons because there are no reasons. But people want them don’t they – so take your pick from these:

I was tired of living in Snoreton-on-Boring with no future that I can see.

I was sick of the ordinary and wanted to stir up the ant heap.

I wanted to make people take notice. Nothing concentrates the mind like death and dying, does it?

Don’t ask ‘Why?’ cos that’s the wrong question.

Better to ask ‘Why not?’

It’s amazing that this don’t happen

I come here with my laptop. It’s a way to get back to the time that is in my mind, the time that I’ve set myself to write about. Jesse keeps me supplied with coffee. We’re friends now. She’d like us to be more, but it’s too soon for that. The place is full of mirrors. Sometimes I look up and don’t recognise myself. I began the account as a letter to my brother. I might change my mind about that.

It’s last July. We’re here in this place you don’t like because you think it’s poncy and full of arseholes. It’s four o’clock on a Friday, after school anyway, so you’re probably down Wetherspoon’s having a few pints. I’m here with Cal. We were best mates then. Friends since nursery but that was about to change. Had been changing, if I’m honest. I’d just failed to notice. We are talking about you. Cal was scared of you when we were little, although he liked to claim you in the playground. Your name being enough to keep the bullies at bay. He never did say all that much when he met you, just ‘Hi. How’s it going?’. That could be because you pretty much ignored him, even when he was scoring off you. In his head, Cal reckons he’s a bit of a bad boy, likes to think he has attitude, but he’s the opposite, his credentials are nil. He wouldn’t do shit, but he’s fascinated by those who do.

While he talks, which he does all the time, I’m looking around for diversion and thinking, maybe you’re right. This cafe
is
poncy and full of arseholes. It’s called the
Rendez
for a start. Short for
Rendezvous
.

It’s supposed to be kind of French, with worn wooden tables, the walls crowded with big mirrors, posters and photographs. Old adverts for different kinds of drink: Guinness, Pernod, Coca-Cola. Photographs full of dead people. Street scenes. Staff paraded outside stores that have gone now. How the town used to be. The mirrors are rippled and pockmarked, the silvery reflections they give back smeared by time. I like mirrors. They’re a useful way to watch people; to watch people watching themselves.

That’s what I’m doing. I’m watching people in the mirrors. That’s how I first see her and I’m no longer listening to Cal. She’s sitting with an older woman, there’s enough of a resemblance to know that it’s her mother, and a bunch of other women who look like her mother’s friends. They are getting stuck into the wine, but she’s sipping a Diet Coke through a straw, clinking the ice in the glass, looking around like she’s bored. There’s a younger lad with her, probably her brother, munching his way through a bowl of chunky chips, dunking them first in ketchup, then mayo, so the mayo is getting red and messy, like it’s streaked with blood. Sometimes he offers the bowl over, like they are supposed to be sharing, but she just waves him away. He’s a little on the chunky side himself, so he looks relieved. The women ignore them, too busy with each other. They are getting down the bottle now, ordering another, their laughter is getting louder the further down the bottle they go. When one is empty, a waitress comes over with a replacement.

The girls who work here are fit. It might not be enough to get Rob in here, I’m thinking, but it works for me and Cal. That’s one of the reasons we’ve started coming in here, that and the fact that Cal’s girlfriend, Sophie, comes here with her mates. She thinks it’s
the
place to be, so naturally Cal thinks that, too. I realise that’s why we are here. I’m just a time-filler. He’s arranged to meet Sophie.

I wonder what the girl sees in the mirror? Two boys drinking coffee. I’m the one on the right: dark, thicker set, hair cut short, neat. Her eyes move to Cal. He’s a different prospect. Most girls go for him. He pushes a hand through his hair. It won’t be long before he looks in the mirror. I expect her to carry on looking at him, but she dismisses him and turns her gaze on me. That’s when I look away. Don’t want her to think I’ve been staring. I know her. One of Martha’s friends, or ex-friends, more like, cos I haven’t seen her for a while now. She shows no sign of recognition. Maybe she doesn’t remember me.

‘Got any stuff? I need some draw. You haven’t been listening. Who’s she?’

‘That girl you’ve been staring at.’

‘Her name’s Vanessa. Used to be a friend of Martha’s.’

Muck by Craig Sherborne
Healing the Bear by Vanessa Devereaux
Back of Beyond by David Yeadon
Wakefulness: Poems by John Ashbery
This Plague of Days, Season Two (The Zombie Apocalypse Serial) by Chute, Robert Chazz
20 Easy Slow Cooker Christmas Appetizer Recipes: Holiday Cooking for Your Gathering by Jean Pardue
Gaudete by Amy Rae Durreson
Own Her by Jenika Snow
Remember by Barbara Taylor Bradford
Call Me Crazy by Quinn Loftis, M Bagley Designs
Our partner