Read Thou Shalt Not Online 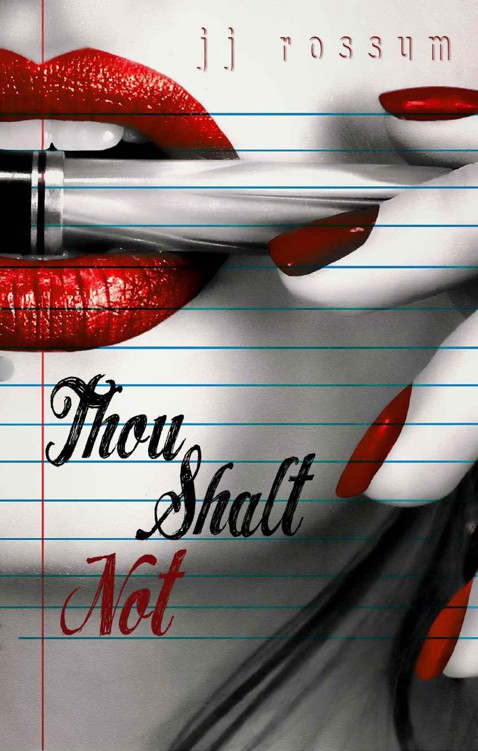 No part of this book may be reproduced or transmitted in any form or by any means, electronic or mechanical, including photocopying, recording, or by any information storage and retrieval system without the written permission of the author, except
for the use of brief quotations in a book review.

Olivia and Caleb by Tarryn Fisher

I felt like I was swimming laps in the world’s warmest pool. The air was unusually warm, even for a September day. The humidity, which normally felt like a heavy wool blanket suffocating you every time you even thought about stepping outside, now felt like the blanket had quadrupled in thickness and been set on fire. The air conditioning in my 1997 Suzuki X-90 (which was lovingly referred to as a funky looking roller skate on 4 big wheels), had apparently known the weather would become nearly unbearable and had no intention of being overworked, so it ceased working at all at the end of August. This inconvenience changed my entire routine of getting ready for work, and as a creature who functions on routine, it added needless stress to my mornings.

Anyone who has ever driven in Florida without the luxury of air-conditioning knows that even with your windows rolled down, you will begin sweating profusely by the time you back out of your driveway. They also know that unless you are driving a block or two, you will wind up with perspiration-drenched clothing when you arrive at your destination. So instead of getting dressed for work before I left the house, I wore my gym clothes while driving to work, and then got dressed once I arrived. There’s nothing professional about a well-dressed man dripping with sweat.

There were only three stop signs, and two traffic signals on my way to work, but that rarely meant I’d arrive in a timely manner. Without any traffic, and with only green lights, I would probably be able to get to work in about seven minutes. But anyone who has ever driven in Florida also knows that traffic can be a serious bitch, and that morning the bitch was mean as hell.

By the time I reached the school, my shirt clung to me like an overbearing girlfriend. And, unfortunately, anyone who saw my drenched body probably thought the same. I was behind schedule because of the traffic, and early-bird students had already begun to congregate outside the glass doors that welcomed them to another day of high school.

I grabbed the tattered blue backpack containing my books and the brown duffel bag containing my clothes, and hurried toward the sidewalk that ran along the west side of the building which led to the outside door of the boys’ locker room. I had hoped to sneak past the group of students sitting on the picnic tables out front, the ones who couldn’t drive and had to be dropped off earlier than everyone else because their parents had to be at work at an ungodly hour.

“Looking good, Mr. H!” Andrew Preston shouted from the table where he sat with the other band nerds. Andrew had taken my 10th grade English honors course the year before and could rarely get through a class session without making a joke about something or someone. “Does the Roller Skate come with indoor sprinklers?”

“Don’t be dumb,” Samantha Bennett said. “He was obviously at the gym. Look at his clothes.” Like most of the band members, Samantha was sizably overweight. I was surprised she knew what a gym was. I scolded myself for even thinking this, but it’s true—most teachers love their students, but we are capable of thinking some pretty awful things about them on occasion. Don’t believe me? Spend an hour in a teachers’ lounge at any school, anywhere.

I ignored both of them and reached the locker room without further harassment. I showered quickly. I could hear the sound of whistles coming from the gymnasium outside the locker room, where Coach Clemmons was finishing up one of his famous early morning practices with the varsity basketball team. I had played for Coach C in my high school days and didn’t envy the boys out there one bit. They would likely turn out to be a disciplined team that made a run at yet another state title, which would give Clemmons his fourteenth in twenty-three years. But as much as the players would remember the championships, they would remember the practices just as vividly, if not more so.

The thud of basketballs being bounced in various places across the court meant practice was nearing an end. Coach Clemmons always gave the players 5-10 minutes of “free time” at the end of every practice, and the chaotic sounds reverberating the locker room walls indicated free time had arrived. I dressed hurriedly, already knowing I would be late for the meeting upstairs. For some reason, that morning I was having the most difficult time tying my necktie (navy blue with small grey hearts), and I had almost given up on it completely when Landry Perkins, one of the school’s star basketball players, entered the locker room to get first dibs on a shower.

“What’s going on, Landry? How was practice today?”

His head was bent over what he was doing. I noticed a red mark on his neck that looked like a hickey. He was a good looking kid. I wanted to slap him on the back and congratulate him. That would be entirely inappropriate coming from a responsible authority figure. I hid my smile instead and remembered the good ol’ hickey days.

“You having trouble with your tie, man?”

“What? Oh, it just seems like it doesn’t want to cooperate with me this morning.”

“Yeah, man, the rabbit. ‘The rabbit jumps over the log. Then he goes under it, around it, and through it.’ Or something like that. I don’t know,” he said it in a sing-song way, almost like a nursery rhyme.

It always amazed me how often teenagers could use words or phrases like
like
,
man
,
dude
,
whatever
and
I don’t know
in their sentences. I am sure there are plenty more, but I couldn’t think of them at that particular moment. Whatever. I don’t know. It’s not like I needed to be taught how to tie the damn thing, I just needed it to WANT to let me tie it. But it was still nice of him to try to teach me.

“Where did you learn that? I don’t think I have ever heard it before.”

“I don’t know. I think my grandma taught me or something.” And with that, he stood up and walked to the showers and turned on the one at the far end of the locker room.

“Don’t forget the rabbit, man!” he shouted over the sound of the running water.

I decided to start the tying process over and sang his little song in my head as I followed the steps. And wouldn’t you know, it worked.

The library upstairs was already full, and the meeting had already begun when I slipped in the back and took an empty seat next to Ron Ward, one of the 9th grade math teachers. Normally, when the staff knew someone was running late, they would purposely make sure the only empty chair was the one smack dab in the middle of the front row. But that morning, I noticed a few more empty chairs than usual.

The school’s principal, Mark West, was in the middle of making a few announcements as I settled into my chair.

“As you can see, we have quite a few of you missing again this morning. Six at my last count, and five of them are out sick. I guess Marty’s toilet exploded last night, so he will be plumbing all day. We all know a nasty bug is going around, so don’t forget to wipe down everything with disinfectant after each class! Can’t very well have all of you go missing with the flu.”

Mr. West continued on, as my mind wandered to the lessons I had planned for that day. I was looking forward to my third period class, American Literature, as we were going to be discussing one of the famous lines from
To Kill a Mockingbird
. The students had been assigned the book for their Summer Reading Program (partly because I loved the book, and partly because my last name is Harper), and we had already dissected it at great length over the first month of the school year. But I had sent them home the previous Friday with the Atticus Finch quote: “The one thing that doesn’t abide by majority rule is a person’s conscience”
and had asked them to be prepared to discuss what they thought it really meant, and how the quote manifested itself in their own lives and the lives of the people around them.

Cold Hearted Son of a Witch (Dragoneers Saga) by Mathias, M. R.
Drive Me Crazy by Portia MacIntosh
Hit Man: A Bad Boy Romance (Hunted, Book One) by Kira Matthison
Every Young Man's Battle: Stategies for Victory in the Real World of Sexual Temptation: The Every Man Series by Stephen Arterburn
Plan B by Sharon Lee, Steve Miller
Agatha Raisin and the Perfect Paragon by Beaton, M. C.
Homicide by Hamlet (Cozy Mystery) Book #3 (Chubby Chicks Club Cozy Mystery Series) by Lois Lavrisa
How to Bake the Perfect Wedding Cake by Gina Henning
Tuppence to Tooley Street by Harry Bowling
Hired by the Brooding Billionaire by Kandy Shepherd
Our partner