Read Through the Smoke Online 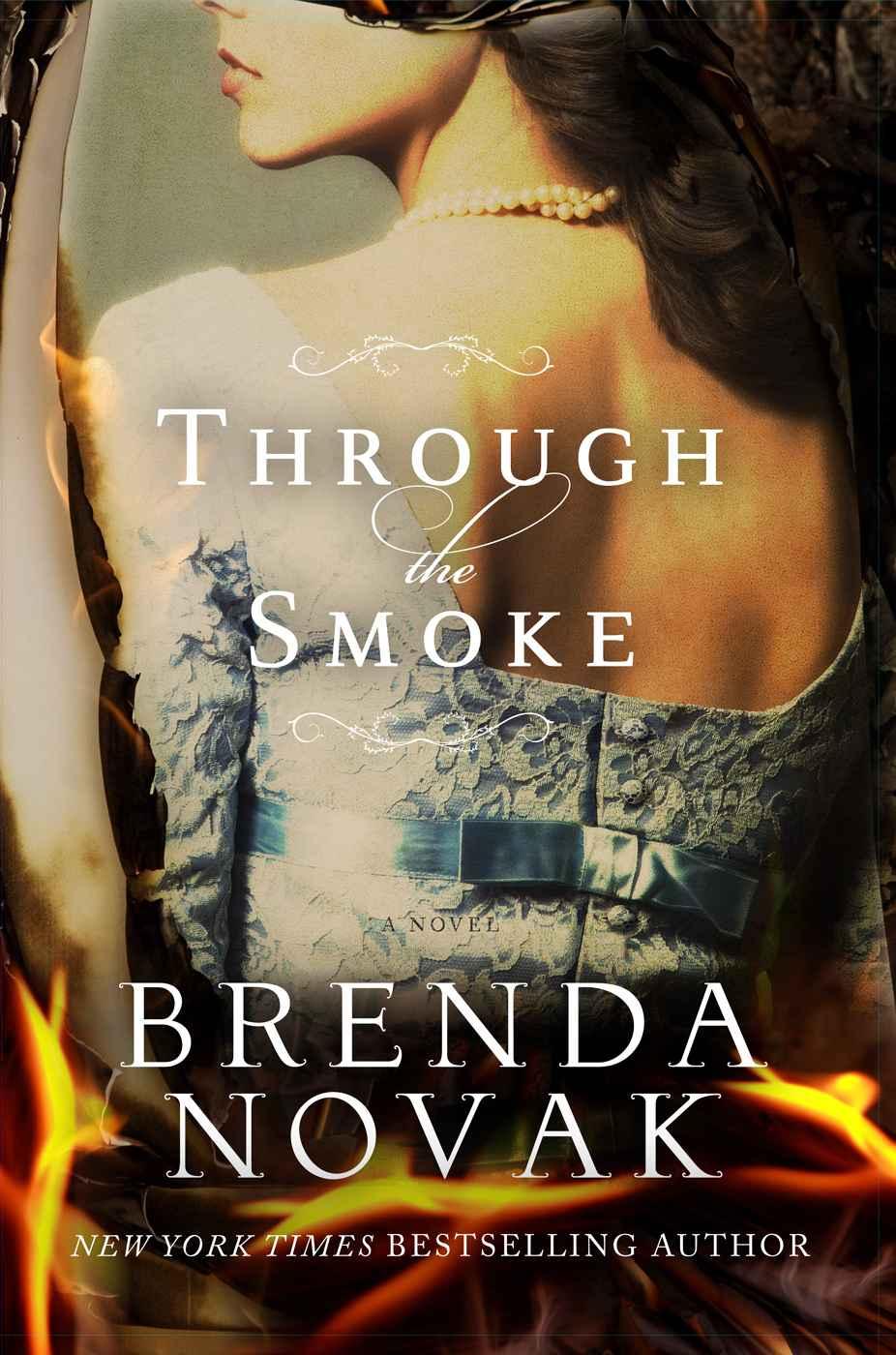 Of Noble Birth
Honor Bound
(
originally available as
The Bastard)

Whiskey Creek Series: The Heart of Gold Country
When We Touch
(prequel novella)
When Lightning Strikes
When Snow Falls
When Summer Comes
Home to Whiskey Creek
Take Me Home for Christmas
(forthcoming)
Come Home to Me
(forthcoming)

The Bulletproof Series
Inside
In Seconds
In Close

T
O
U
NCLE
J
IM
. T
HANKS FOR ALL YOUR SUPPORT
. Y
OU HAVE BEEN A WONDERFUL EXAMPLE OF LOVE AND KINDNESS
.

I’m so excited to bring you this historical romance!
Jane Eyre
was one of my favorite books when I was a girl (it’s still one of my favorites). I love the gothic feel of it, the air of mystery and, most of all, the heart-pounding romance. So when I first started writing, I set out to create stories in a similar vein. Then my career took a different turn and I ended up writing contemporary romance. After forty-something books, I’m finally returning to my first love. I hope you will enjoy reading this story as much as I enjoyed writing it.

In case you’re interested, I also have two other historical romances that have been published so far,
Honor Bound
and
Of Noble Birth.
And for those who are willing to read another genre, I’m currently writing a smalltown contemporary romance series. Come meet the longtime friends who’ve made Whiskey Creek the “Heart of Gold Country” with
When Lightning Strikes, When Snow Falls
(nominated by
RT Book Reviews
magazine for Book of the Year),
When Summer Comes
and
Home to Whiskey Creek
(with more on the way). Information about these and my other works can be found on my website at
BrendaNovak.com
. There, you can also enter to win my monthly drawings, sign up for my newsletter, contact me with comments or questions or join my fight to find a cure for diabetes. My youngest son suffers from this disease. So far, thanks to my generous supporters, my annual online auctions (held every May at
BrendaNovak.com
) have raised more than $2 million.

Here’s wishing you many hours of reading pleasure!

M
EN BELIEVE WHAT THEY WISH TO BELIEVE.

He’d kill her. Just as soon as he could get his hands around her delicate neck, he’d stop the black heart that beat beneath all that misleading beauty and put an end to his own misery.

Although Truman Stanhope, the Earl of Druridge, had come all the way from London to Newcastle-Upon-Tyne and had a bit farther north to go before he reached his home, blind fury caused his pulse to pound as fast as the hooves of the horses that were pulling his coach. His driver had been pushing the poor beasts so hard it’d been necessary to stop and change them out at every opportunity. But he was determined to reach Blackmoor Hall in record time, to confront his wife as soon as possible.

“How dare you?” he muttered over and over. It wasn’t enough that he’d lost his beloved parents to a terrible carriage accident shortly after he’d married Katherine? That the child she bore him had lived only six months—and died under mysterious circumstances, circumstances that made him suspect she might have had something to do with it?

He glared down at the letter she’d sent him, at all the lies written in her perfect penmanship. Did she
really
think he was so addle-brained? So terribly gullible as to believe the child from this new pregnancy could be his?

I am pleased to share this good news with you, so pleased, in fact, that I dare not wait until your business has concluded in Town and you have returned home. Knowing how eager you have been to have a child—

He noticed that she did not refer to their firstborn. She never did, never had. Since the moment little Jeremy entered the world, she’d ignored him, and Truman feared it was
his
love for the child that had given her the incentive to
do what he believed she did. She’d seemed singularly determined to destroy him, no matter how far she had to go.

Think of it
, she wrote.
Now, if God grants us a son, you will have an heir to your lands and title. At last our prayers have been answered.

“Prayers,” he growled, feeling the rage boil up again. “
Prayers
?” He’d long since quit asking God for any type of a child—boy or girl—with Lady Katherine. He didn’t think she was stable enough to be a mother. There was something wrong with her, something vital that was missing. He’d seen it time and time again in that odd, blank stare of hers. In her spiteful, cutting words. In the way she laughed at anything that brought him misery.

The letter went on to say she must have gotten pregnant that night nearly three months ago, when he was intoxicated and, although she’d represented it differently, desperate enough that he nearly took her back into his bed. He’d started to kiss her, to touch her—his body had demanded a release after the many months he’d remained celibate—but he hadn’t finished the act. He’d thought of Jeremy and been unable to finish. As drunk as he was, he had not been so drunk that she could rewrite history.

So what was this
really
about?

He wished he couldn’t answer that question, but it was all too obvious. He’d left her alone long enough that she’d grown desperate for a way to cover her betrayal. After three months, or maybe longer, she was probably beginning to show and knew she had to explain the pregnancy to him somehow. Waiting until he returned and found her big with child would look too suspicious. So she’d penned this letter full of false excitement, hoping to disarm him with her “good news” and hope of an heir.

Instead her words had brought all the hate he’d begun to feel for her rushing to the surface.

It was his driver, calling out to him from the box on top. Truman had been so silent on the trip that William kept checking on him.

“Fine,” he responded, but his mind wasn’t focused on his answer. He was wondering who the father of this child could be. The way Katherine flirted and fawned over every man she met left him with so many possibilities. She’d
spent a great deal of time in London, both with and without him, and loved nothing more than inciting him to jealousy.…

He crushed the letter in his hand. “Damn her!”

“Did you say something, m’lord?”

He hadn’t realized he’d spoken out loud. But he didn’t bother to explain. They were already passing through the black-iron filigree gate and charging up the drive to Blackmoor Hall. It was Sunday morning. With any luck, the servants would still be at church and he’d have the chance to speak to his wife alone. Katherine had mentioned that she had “taken to her bed lest she risk the well-being of
their
child.”

The irony of her being so careful, after what he believed she’d done to little Jeremy, made his muscles bunch. Heaven help him. He was finished, he promised himself, and he’d tell her so. He would get a divorce, no matter the consequences to either of them. He would not live with her another day. Or maybe once the baby was born, he’d have her committed to Bedlam.

Jumping out the moment the horses came to a stop, he ran into the house and shouted her name.

The Adventures of Button by Richard W. Leech
Rules of Crime by L. J. Sellers
Three Sides of the Coin (Catherine I) by Lennon, Carole J
The Shepherd Left Behind: A New Fable for Christmas by Thomas Rowe Drinkard
Fenris, El elfo by Laura Gallego García
The Star King by Susan Grant
Holding Out for a Hero by Amy Andrews
Cooper’s Redemption (Crimson Romance) by D'Ann Lindun
Nicole Jordan by The Prince of Pleasure
The Bloodbound by Erin Lindsey
Our partner