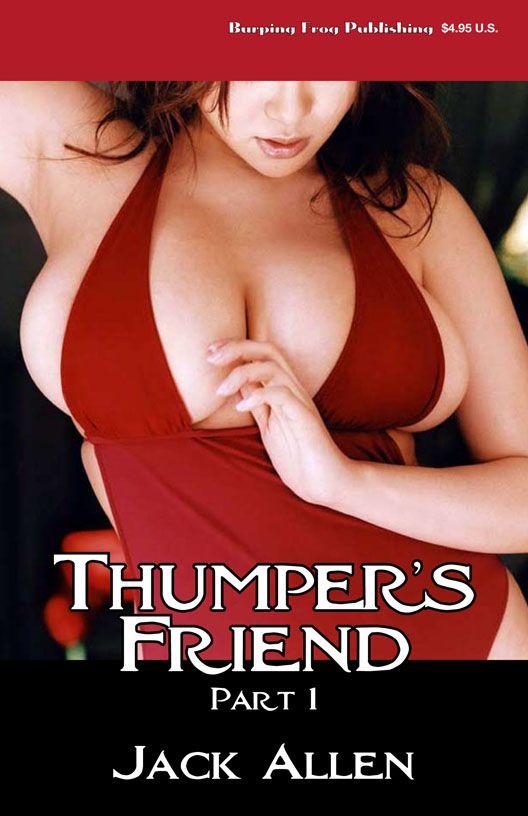 Scott dribbled past an imaginary defender, cut back left moving as fast as he could, rose into the air with the ball in his right hand, and slammed it through the hoop.

For a moment he hung by his right hand from the ten foot high rim, then dropped to his feet and picked up the bouncing ball.

The sun that afternoon was blindingly bright, but a cool breeze made the heat easily tolerable.

Sweat dripped from his brow.

He had removed his shirt shortly after stepping outside.

His shorts were loose and baggy, and the black spandex shorts he wore beneath them prevented his penis from flopping around when he jumped.

Scott dribbled again, started forward and pulled up for a jump shot, which came down on the rim, bounced up and fell through.

He scooped up the ball again and dribbled out to the edge of the sidewalk, which he always used as an out of bounds.

He looked up and caught the eye of a young girl as she was walking by.

Her eyes were bright and cheerful.

She smiled at him.

She looked familiar, but he couldn’t quite place a name with her face.

She had high cheekbones, pouty, full lips and a beautiful figure.

Her straight auburn hair was pulled back in a ponytail that was tied with a white ribbon.

She was wearing loose jeans that sort of hung on the curve of her seductive hips without the help of a belt, in a way that suggested they might fall off if she wasn’t careful.

The two swollen mounds of her breasts jiggled when she walked and pushed out the front of her t-shirt, which was cut off above her navel and hung like a curtain over her flat belly.

The collar of the t-shirt was cut open in a V in the front, displaying a small amount of her pleasant cleavage, which moved teasingly in and out of view.

The way her nipples rose to distinct points beneath the fabric and gave away her arousal probably meant that she wasn’t wearing a bra.

“Maybe you like to play other things,” he said.

Her hands went into her pockets and almost pushed her loose jeans right off her hips.

There was a wide enough gap between the jeans and her slender waist that he was sure he could see right down into them if he was standing close enough.

But my friends call me Thumper,” she said.

“Who are your friends?”

“You’re Casey Turner, aren’t you?” Scott said
,
his eyes lighting up as her face finally registered in his memory.

He was slightly shocked, to say the least.

Skinny, little Casey Turner had grown up, and she was a gorgeous young woman.

“I didn’t even recognize you.”

He stood back and looked at her again.

“You certainly have grown up a lot.”

He looked into her eyes again.

He saw in them a look of desire as she looked back at him that he had seen many times in women he knew, including his sister.

“Isn’t it too hot out here for you to be playing basketball?

You’re all sweaty,” she said.

She reached out and touched his bare chest with her finger.

“I can think of better ways to get sweaty,” he said

“Me too,” she said, and smiled again.

“You
wanna
come inside?”

I
gotta
get home.”

She looked across the street at her house.

Her father was working in the front yard with a rake.

His back was to them.

“You
wanna
come over to my house?”

Scott looked across the street.

“Does your father know you like to make out with boys?” he said.

She took his hand and pulled but he didn’t move.

“Do you like to do more than make out?”

She hesitated for a moment,
then
smiled again.

I let them touch me.

Do you want to touch me?”

He had begun to learn how innocent she really was.

That only made him want her more.

“Yeah, I
wanna
touch you.

I
wanna
do more than touch you.”

Her eyes grew wide and she blushed.

“Do you have a big dick?

I heard about it, though.

I have a friend who touched one once.”

“I’ll let you touch mine if you let me touch yours.”

She led him across the street, after Scott had put his shirt back on.

He couldn’t believe he was going to do this.

He was sure Mr. Turner was going to kill him.

“Scott has a question to ask you, Daddy,” Casey said.

“Do you mind if I make love with your daughter?” Scott asked.

Mr. Turner looked at the young girl by his side.

Casey was looking back at him with an appalling expression.

She obviously thought he was going to ask him something innocent.

Scott was sure she didn’t really know what making love meant, although she might have an idea.

“Do you want to?” Mr. Turner said, with a scrutinizing eye.

Mr. Turner looked down at his daughter again.

“I suppose that would be all right, Scott,” he said.

Let’s see what you’ve got.”

He started inside and Scott followed.

Casey had no choice but to go with them.

Inside the house, he went to the kitchen and got them each a glass of cold milk.

Scott was thirsty from the exercise and would have preferred a glass of water, but he drank the milk anyway.

All three of them were standing in the kitchen.

“I’d be delighted if you were the one who showed my daughter the ways of love.”

“Don’t worry about that now,” he reassured her.

Scott grinned at her.

She had a grown up body, but she was still young and innocent, and he loved that about her.

He loved that about all girls her age.

His penis had been hard in his shorts since Casey first touched his sweaty chest in his driveway.

“If you don’t mind, Scott, I’d like to see what you’ve got so I know what my daughter’s getting into.”

He gestured to Scott’s groin.

Scott realized he wanted to see his dick.

He looked around the kitchen.

Scott lifted the bottom of his t-shirt and held it under his chin, exposing his rigid stomach muscles, pushed his baggy outer shorts down to about his knees, hooked his fingers inside the elastic band of the spandex shorts, pushed them down below the level of his crotch, and reached in and pulled out his erect penis, holding it out in front of him like an enormous garden hose.

He looked up at Mr. Turner first, then Casey.

Mr. Turner’s eyebrows went up in surprise at the sight of the thing.

He stepped forward and picked it up in his rough hand, something Scott was not prepared for.

Scott leaned back against the counter with his hands and let the man inspect his equipment.

He watched his hands turn it over to examine all sides of it and squeeze it firmly.

He was almost embarrassed to admit it felt good.

He was squeezing it tight and pumped it with his hand.

Casey realized she was staring and snapped her mouth shut, although she could not tear her eyes away from the sight before her.

He wanted to save it for his sexy daughter.

The Dark Horse by Rumer Godden
The Number 7 by Jessica Lidh
Drunk Mom by Jowita Bydlowska
More Than Enough (Enough #2) by Kate Daniels
Conquered: She Who Dares Book Two by LP Lovell
A Gala Event by Sheila Connolly
Blood Possession by Tessa Dawn
The Disciple by Steven Dunne
Dreamwalker by Kathleen Dante
Babylon by Camilla Ceder
Our partner