Unbound, a Paranormal Romance (Book 2 of the Spellbound Series) 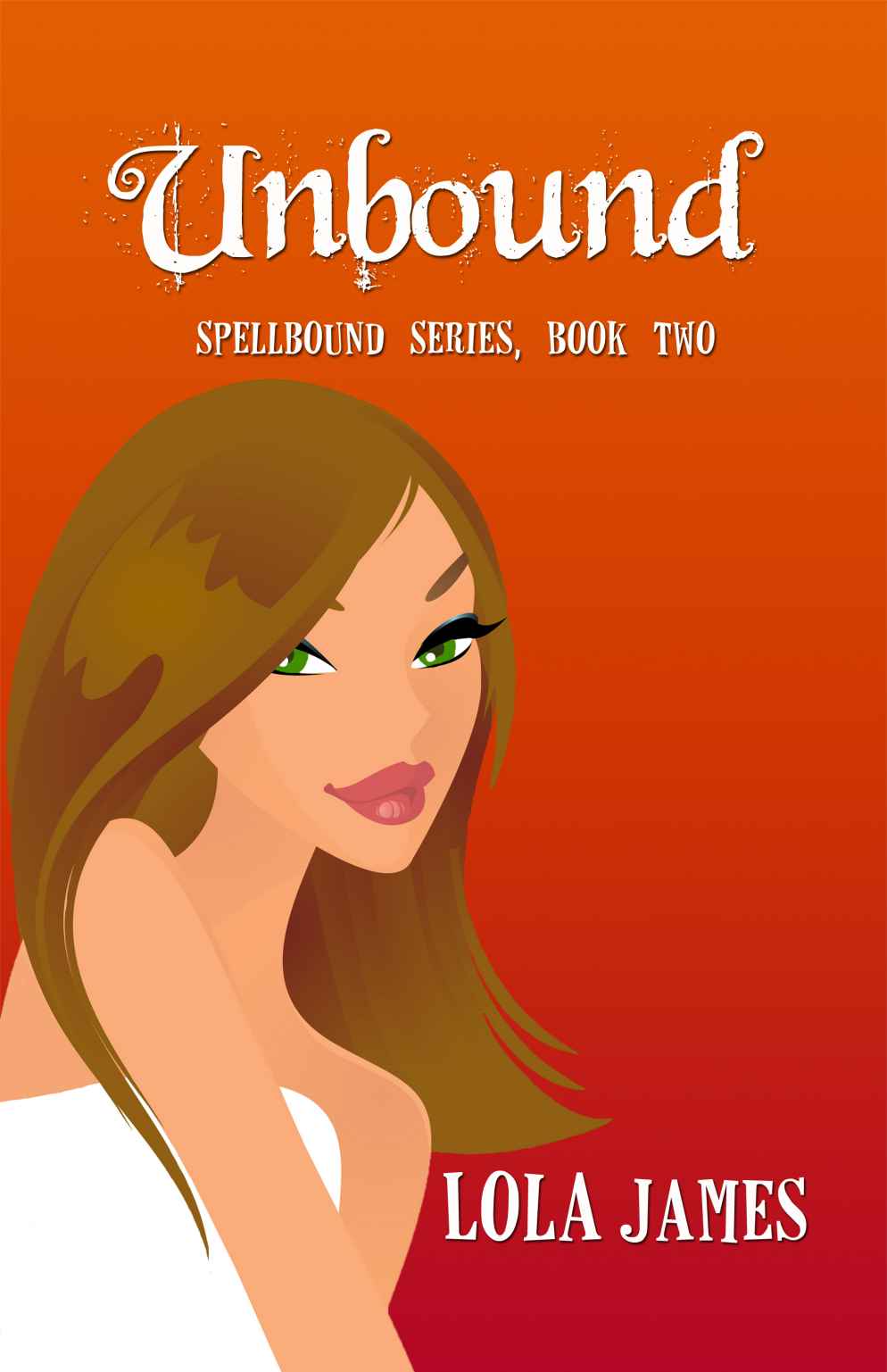 This book is a work of fiction. Names, characters, places and incidents are products of the a
u
thor’s imagination or are used fictitiously. Any resemblance to actual events or locales or pe
r
sons, living or dead, is entirely coincidental.

The scanning, uploading and distribution of this book via the internet or any other means without the permission of the publisher is illegal and punishable by law. Please purchase only authorized electronic editions, and do not participate in or encourage electronic piracy of copyrighted mat
e
rials. Your support of the author’s rights is appreciated.

Find out more about the
characters
at

This book is dedicated to my Grandmother for being
my everything
!

This plan has to work! It just has to!
I was sick and tired of being left out of everything. It took me some time to find Antonia Nikos, but I did it. The problem was, every time I got close, she disappeared. I followed her all over Europe, Asia, South America, and even Africa, but it wasn’t until I met Annie that it all clicked: Toni Hollander was Antonia!

Pleased with my work and now favored by the gods, I was ready for my triumphant return to Mount Olympus. I would not be the laughing stock of the gods for another thousand years. I stopped my pacing to check the sun. It was almost noon.

“Where is she?” I muttered, praying she hadn’t backed out on our deal. Persephone told me to meet her here on the island of Crete when I found the girl who lured Antonia to Hades.

“Eris…Eris,” a soft voice called before Persephone rounded the corner.

I couldn’t hide my excitement. When my eyes met hers, I pulled her into a hug, happy to have a goddess in my presence. And one who was glad to see me, no less. “So glad you made it, Persephone. Please, have a seat.” I offered her the chaise lounge and sat back in a club chair.

“I won’t be here long. Is it done? Is the girl with Hades?” she demanded.

I nodded my head as I rose to my feet, a stupid smile plastered across my face.

“Good. I’ll take over now.” A malicious smile inched across her face. “I must go to the underworld, but I will lay eyes on you at the Mount shortly, dear Eris.”

My smile vanished. “But
Pers
…”

In a flash, she was gone and only an eerie cloud of grey smoke remained. I sunk into the chair, my face in my hands as a sudden dread befell me. I’d never received the full story on
who
Antonia Nikos was. I just assumed she was some girl Persephone wanted to use as a ploy with Hades, but the evil smile she wore on her face led me to believe otherwise.
What have I done?

I didn’t know what to do. I couldn’t risk being associated with whatever evil Persephone had planned. I would surely be sent to Tartarus if Zeus decided to banish me again.

I could
flee,
hide out for a while before they trace any of this back to me. I would not even tell my brother.
I mustn’t think; I must just go. I just hope I have not landed Antonia in harm’s way.

I blinked, opening my eyes to the woman, I had once loved but that I now despised for making me think she was dead. My mind was in a daze after the things she’d told me about Antonia being with Hades; I just couldn’t believe it. She took my hand and guided me to the bedroom.

“Benjamin?” Her voice was softer than I remembered and her touch now matched mine—cold and hard. Catherine’s pale blonde hair cascaded around her shoulders, down her back and blended with her flawless pale skin; but it was her eyes, that showed the true difference in her. They were jet black and ominous and the sparkle that had made so lively and so dear to my heart was gone. She was no longer the woman I knew or loved. “Benjamin!” Irritation replaced the softness I’d heard just moments before.

“Untie my dress,” she ordered.

I looked down at her, noticing that she wore Antonia’s navy blue halter dress—the one that she wore on our date to the Arboretum. “Why are you wearing her clothes?” I asked. I shook my head and gritted my teeth; a sudden anger pushing me through the haze I was stuck in.

“I am sure Hades will clothe her once he has had his way with her.” She laughed at her own joke. It had to be a joke—Antonia would never give herself to Hades.

I shook away the thought.

Her bare back faced me as I unwillingly untied the strings around her neck. In a moment, she turned and stood before me naked, just as I remembered her. I reveled in her nudity before she reached forward to unzip my jeans. I didn’t want what she was trying to give me. I felt sick with a heavy heart and head as I looked at her naked figure. She of course was shocked by my rejection when I had pushed her away.

“You know you want me,” she purred, slowly taking my hand and rubbing it along her soft skin to her hardened nipples.

I closed my eyes as my fingertips grazed her breast. I was imagining Antonia, but when cold hands slid into my jeans and massaged me, my eyes flew open. The blonde hair and jet black eyes I saw taunted me and angered me. “No, I don’t want you!” I could hardly believe the words that came from my mouth.

“We will see, my darling Benjamin. You could never resist me when I lay naked next to you.”

I scoffed. It was obvious she didn’t know that while I’d slept next to Antonia those past few nights, I’d been fighting the urge to ravish her. I didn't because I was afraid that she wouldn’t want me after she found out that I was a vampire. To my surprise when I did finally act, she did want me, but the moment passed when she was given to Hades, “her love” as Catherine put it.

“It is dawn and I need rest,” I said. It was partially true, but I really just wanted this awkwardness to be over and the night to come so I could find Antonia.

“Have it your way.” Catherine stomped away like a two-year-old and lay down in the same place Toni had
lain
the night before. Leaving my boxer briefs on, I carefully shoved a pillow between Catherine and I to act as a barricade. Black sheets and walls paired with the darkness of the night made the room pitch-black, perfect for a sleeping vampire, but I couldn’t take comfort in my bed with Catherine in it.

“You are taking this too far. I know you, Ben; you were turned into a vampire at whorehouse. You were a whore sex object. You live for sex, you crave sex,” she said, laughing.

“Not anymore,” I countered. It was true, I was made vampire in a whorehouse by the madam, and enjoyed a tryst here or there, but I no longer desired just sex. I wanted love with one person and that person was now in the underworld.

“You keep telling yourself that. We are vampires and sex is part of our nature. The only one who didn’t think that was the holier-than-thou Joanna.”

It was the final straw. I felt my rage building until I couldn’t control myself any longer. Without a word, my hands were around Catherine’s neck and she peeled at my fingers, desperately trying to make me release my iron grip.

“You will never talk of Joanna in such a way,” I growled through clenched teeth. “Now, if you want to sleep for the day then lie down and sleep, but if you utter another word about Joanna or Antonia, you will meet your end!”

Catherine’s eyes bulged out and her mouth hung open. She slowly nodded and I released her. A breeze passed through in what was an already chilly house. It felt even colder and empty without Antonia in it. The icy look Catherine gave me didn’t add to the mood. She turned her
face into a pout that would have normally melted me, but I felt nothing for the blonde beauty that was only inches away from me.

My heart ached for Antonia, and sadness enveloped me. A sharp pain in my chest stabbed me as I closed my eyes for rest. I was heartbroken but my spirit not yet broken; I would have to hear the words from Antonia myself that she belonged to Hades. The thought brought a bad taste to my mouth––
my
Antonia with that spineless, evil, Hades. Anyone that would kill the goodness of Joanna and turn Catherine into the monster that she is could only be spineless.

“Antonia.” I said her name so breathlessly I hoped I hadn’t woken Catherine. I sat up in the bed and turned on the bedside lamp as disgust filled me. How could the woman I once loved become so evil? I couldn’t believe that she would work with Hades of all people and send Antonia to him. If I didn’t care for her, I would kill her now but that was not who I was.

The doorbell rang. Hope returned as the thought of Antonia coming back to me entered my head. I grabbed my pants and an instant later, I was at the door. My hope diminished when I looked out the peephole, but I immediately opened the door.

Dawn stood there with her bright blue eyes wide looking like an angel. She blushed as she stared at my shirtless body, seemingly at a loss for words. The sun was setting behind her, the sky bright pink, and purple, reflecting off the San Francisco Bay.

“Dawn?” I glanced over my shoulder for a sign of Catherine.

“Ben, I came to check on Toni, remember?” Dawn asked, finally finding her words with one of her warm smiles as she pushed one of her blonde curls behind her ear.

“Of course I remember but now is not the best time,” I whispered. I needed to compel her to leave because I didn’t want Dawn to become Catherine’s dinner. “You must go.” I stared directly into her eyes and gripped her shoulders with both my hands.

“Ben, what are you talking about? You told me I could come over and see if she was well for work tonight. Why are you acting so weird?” Dawn pushed the door open.

I didn’t know why my compulsion didn’t work. My brows shrugged together as I eyed Dawn suspiciously. She pushed past me, unaware that the bloodthirsty bitch upstairs could come down and drain her at any moment. With a sigh, I gave the door a push but when it didn’t close, I looked down at the brown loafer that kept it from shutting all the way.

Reopening the door, I found Kevin standing with an old worn book under his arm and a messenger bag over his shoulder. I would gladly let
him
become Catherine’s casualty. I gave him
a
once-over. He looked different and had an air of confidence with him. The fact that he was fully dressed with jeans and a brown sweater that matched his hair and made his green eyes look hazel while I stood bare chest in last night’s jeans gave me an uneasy feeling. I envied him because Antonia was once in love with him, and he obviously felt something for her or he wouldn’t be standing in my house with such clear worry on his face.