Read Thunder of the Gods Online

Thunder of the Gods 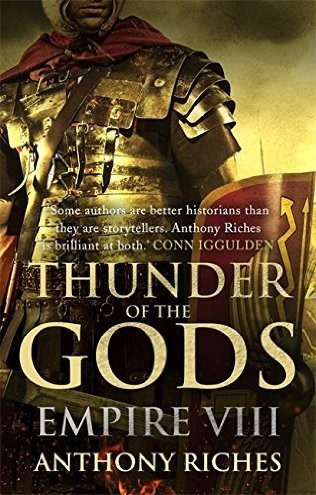 By the same author in the Empire series

By the same author in the
Empire
series

Anthony Riches holds a degree in Military Studies from Manchester University. He began writing the story that would become the first novel in the Empire series,
Wounds of Honour
, after visiting Housesteads Roman fort in 1996. He lives in Hertfordshire with his wife and three children.

Find out more about his books at
www.anthonyriches.com
.

First published in Great Britain in 2015 by Hodder & Stoughton

The right of Anthony Riches to be identified as the Author of the Work has been asserted by him in accordance with the Copyright, Designs and Patents Act 1988.

For Vivienne Maxwell, David Mooney and John Prigent – the triumvirate who make sure my mistakes never reach your page.

As usual with the
Empire
series, what looks to the reader like a leisurely progression through the provinces and events of late second-century Rome is in reality a book-by-book refinement of the author’s existing knowledge, as each story’s location and plot requires a more detailed understanding of the specifics in question.

For my understanding of what it took to transport large bodies of soldiers by sea I am indebted to Jorit Wintjes for sharing his paper ‘Hauling a Legion across the Ocean: Roman Military Sealift Capabilities beyond the Mediterranean’ so generously. I had no idea that many legions had an officer on the staff who was expert on the methodology of legion maritime transport, testament to the ubiquity of these military juggernauts.

And my grasp of the sheer complexity of the Parthian empire’s military capability – which was until then limited to what I’d read about Carrhae – was abruptly and amusingly improved by a Skype session with three students of Persian history whose intelligence, wit and humour was both entertaining and highly informative. Nadeem Ahmad, Amir Yahyavi and Patryk Skupniewicz provided me with an insight into the varied capabilities of the kingdoms that made up Parthia’s ability to face off to Rome’s more or less constant encroachment.

With the manuscript written I fell back upon my usual team of beta readers – David Mooney, Vivienne Maxwell and John Prigent – whose varied styles of feedback provided me with their usual valuable perspectives on what I’d got right and wrong when it came to writing an informative and entertaining story.

And domestically, from the moment I typed the first word in
Thunder of the Gods
, all the way through the usual elation and despondency of a novel’s sometimes painful gestation, right up to that moment when the book lies steaming and complete, and the usual celebratory bottle is opened, my wife Helen’s usual no-nonsense tolerance and encouragement was invaluable. My editor Carolyn was as patient as ever.

And one more thank you. When the title of this book was first debated, and I wasn’t quite sure what it ought to be, I put it out there for discussion. The brief: Parthian heavy cavalry, lots of noise, very scary, and so on. My good friend (and occasional partner in hedonistic food and wine excess) Robyn Young came to the party with the killer title –
Thunder of the Gods
. Let’s hope book nine has a title that works as well. 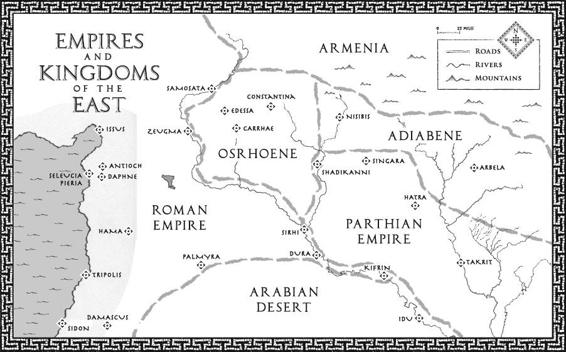 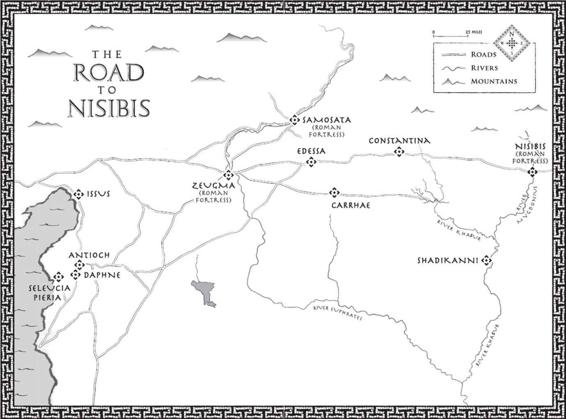 ‘Well now Tribune, are you still sure you wouldn’t rather be back in Antioch with your young friends?’

Gaius Vibius Varus looked down from his horse at the centurion marching alongside him with a quick smile, easy in his relationship with the older man despite their twenty-year age difference and the social gulf between them.

‘It’s a difficult choice you pose, First Spear. On the one hand, I could be lounging around drinking wine and watching exquisite young ladies oil each other up for my entertainment. On the other, here I am, breathing in the fart-laden dust of five hundred men’s boots.’

He paused for a moment, looking up at the sky and pursing his lips as if in thought. The cohort’s senior centurion grinned up at him, flicking away a vicious-looking fly that was hovering over his head with a practised sweep of his vine stick.

‘You forgot to mention the heat, the insects, the constant moaning of soldiers on the march, the occasional screams of abuse from my more vigorous centurions …’

He winked at the younger man.

‘Which is to say all of them. That and the fact that any “young ladies” you encounter in Nisibis will have bandier legs than most cavalrymen you’ve ever met.’

‘Surprising though it might seem, First Spear, I didn’t actually have whoring on my mind when I persuaded my father to use his influence to get me a tribunate with the Third Gallic.’

The older man, technically his subordinate but very much the master of all he surveyed, and happy enough to indulge a tribune whose apparent disdain for the differences between them was in pleasant contrast to the usual attitudes of sons of the aristocracy towards the soldiers they commanded, snorted gentle derision.

‘Which is quite unlike most of your colleagues, if I might be so bold. Antioch sees a good sight more of you young gentlemen than the fortress at Zeugma ever will, and as for Nisibis …’

Varus barked out a harsh laugh, his mimicry of the legion’s senior tribune uncannily accurate.

‘Only a bloody fool ever makes the march to Nisibis without direct orders, young Vibius Varus! The whole town positively
stinks
of unwashed Arabs.’

The centurion smirked at the precision of his tribune’s imitation of their mutual superior.

‘And the
women
! Dear gods, the women are fit for nothing better than servicing the common soldiery!’

‘Tribune Umbrius has something of a point, as it happens. You’ll see the wisdom of his words soon enough, once you’ve spent a few days with nothing more entertaining to fill them than walking the city’s walls and staring out into the emptiness that surrounds the place. You mark my words, young Tribune, you’ll be yearning for the delights of Antioch soon enough …’

He fell silent, his sharp eyes narrowing at the sight of a half-dozen horsemen galloping back down the road that led away into the east.

‘What’s got
them
moving so fast, I wonder? Trumpeter, sound the halt!’

The long column of soldiers stopped marching at the horn’s signal, their officers watching with calculating expressions as the cohort’s scouts came down their line at a fast trot. The horsemen’s leader jumped down from his mount and saluted the centurion with the look of a hunted man, belatedly turning to repeat the gesture towards Varus. His face was seamed from a lifetime spent in the saddle under desert skies, although he was little more than a decade older than the tribune.

‘What is it Abbas? Did that pretty little mare of yours get stung on the arse?’

The officer’s tone was light, but there was no mistaking the look on his face. The scout pointed down the road to the cohort’s front as he replied, his words a near gabble.

The Vampire's Warden by S J Wright
Concrete Evidence by Conrad Jones
More Than a Mistress by Leanne Banks
Veneno de cristal by Donna Leon
Castleview by Gene Wolfe
One to Take (Stuart & Mariska): Sexy Cowboy (One to Hold Book 8) by Tia Louise
You Can Be Thin: The Ultimate Programme to End Dieting... Forever by Peer, Marisa
Falling by Anne Simpson
March With Venus: 94 Love Games (Book 7) by Peters, Karma
Star Spangled Cowboy by Paige Warren
Our partner