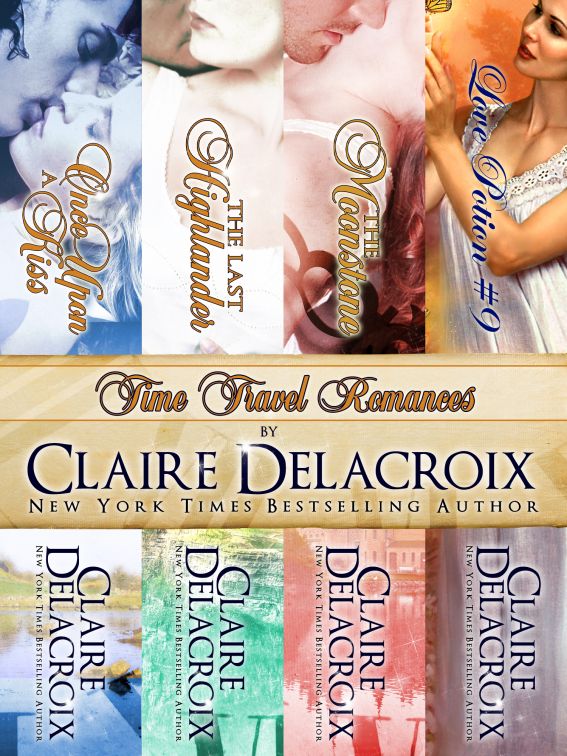 ONCE UPON A KISS

Once upon a time, I wrote four fantasy
romances for Berkley – two for the Time Passages imprint and two
for the Magical Love imprint. The books were
Once
Upon a Kiss, The Last Highlander, The Moonstone
and
Love Potion #9
. Although technically they are
not all time travel romances, I’ve chosen to bundle them together
that way because they each feature heroes and heroines from
different times. I’ve also chosen to republish them as Claire
Delacroix books, even though they were originally published under
my pseudonym Claire Cross.

Each of these books was a milestone for
me.
Once Upon a Kiss
was the first romance
I sold with a contemporary setting, for example. Now it’s clear to
me that the writing of these four books was a creative journey.
They gave me the opportunity to play with humor more, and to work
on balancing comedy and tragedy in my books. In many ways, they
made my later Coxwell series of contemporary romances possible.
(The Coxwells, by the way, will be republished this summer in new
print and digital editions.)

All four of these fantasy romances - or
romantic comedies, or time travel romances - are available once
again, not just in this boxed set but individually, in new digital
editions and print editions. As with all of my re-releases, I’ve
chosen not to revise these books, but to republish them pretty much
the way they were published in the first place.

In other news, I’ve returned to medieval
Scotland in my books and am happily back at Kinfairlie again.
The Renegade’s Heart
, the first book in a new
four-book series called The True Love Brides, will be published in
May 2012. This new series continues the story from my Jewels of
Kinfairlie series, following four more of the siblings at
Kinfairlie as they meet their romantic matches and find their
happily-ever-afters.
The Renegade’s Heart
is Isabella’s story and I’m very excited to have the chance to
finally tell her tale. Visit my website for more information about
this series and other upcoming releases.

Until next time, I hope you are well and
have plenty of good books to read.

All my best, Claire

For over a thousand years – so
legend has it – the brambles have grown wild over the ruins of
Dunhelm Castle. Many believed that the thorns were a sign that the
castle was cursed, so no one dared to trespass, and the secrets
that they protected and concealed have remained hidden – until
now.

Armed with a pair of gardening shears, Baird
Beauforte is determined to clear away the brambles that hinder the
development of his resort, and he won’t let local superstition
deter him. Dunhelm Castle is supposed to be the latest jewel in the
Beauforte Resort chain, but the renovations can’t be finished if
the workmen are frightened of a so-called curse. To dispel any
lingering fears, Baird decides to vanquish the briars himself. What
he never expects is to find a mysterious slumbering beauty…

Aurelia is like no one he has ever met
before. Upon awakening, she demands to know his identity and why he
is in her father’s castle! Bemused by her claime of being a king’s
daughter, he is certain he had never met this “princess” before,
although something about her rouses a haunting sense of
familiarity. Soon, dreams plague this by-the-book
businessman…dreams that feel more like memories. And Baird begins
to wonder if he can claim his heart’s princess – now and forever –
with a kiss.

Praise for Once Upon a Kiss

“
This expertly crafted,
beautifully touching “Sleeping Beauty” tale is absolutely wonderful
reading. Ms. Cross has provided everything I require in a romance –
excellent character development, well-plotted storyline with a
touch of mystery, just enough conflict to be interesting and
exciting, yet not overpowering, plus a unique paranormal element.
This book is simply marvelous!”

“
Claire Cross
demonstrates that she is one of the most talented writers of time
travel romances with
Once Upon A Kiss
, a
wonderful tale that fans of the sub-genre will
devour.”

“
Like a sorceror, Claire
Cross spellbinds her readers and carries them on a magical journey
through the pages of Once Upon A Kiss. Although the plot is
familiar, it’s farm from predictable. It’s fresh and exciting,
passionate and sensual. As the story reaches its climax, even the
most skeptical reader may believe that true love can transcend
time.
Once Upon A Kiss
is at the top of my
recommended book list.”

“
Claire Cross turns humor,
love, murder and reincarnation into a work of art. Take a bow,
Claire, this is stunning!”

“
A whirlwind of romantic
adventure!”

Kathee S. Card for Under the Covers
Reviews

Winner of the Colorado Romance
Writers’

or Futuristic Romance of 1998.

This book was originally published under the
pseudonym Claire Cross. This re-released edition has only minor
corrections from the original text.

Without limiting the rights under copyright
preserved above, no part of this book may be reproduced, stored in
or introduced into a retrieval system, or transmitted, in any form,
or by any means, (electronic, mechanical, photocopying, recording,
or otherwise), without the prior written permission of both the
copyright holder and the publisher of this book.

This is a work of fiction. Names,
characters, places, and incidents either are the product of the
author’s imagination or are used fictitiously, and any resemblance
to actual persons, living or dead, business establishments, events,
or locales is entirely coincidental.

The scanning, uploading, and distribution of
this book via the Internet or via any other means without the
permission of the publisher is illegal and punishable by law.
Please purchase only authorized electronic editions, and do not
participate in or encourage electronic piracy of copyrighted
materials. Your support of the author’s rights is appreciated.

“
Ships!” The sentry’s
hoarse cry carried over the heavy walls and made every inhabitant
look up with alarm. “Ships on the horizon!”

Aurelia crouched lower as her father darted
up a ladder with the agility of a man much younger than his own
fifty summers. Hekod’s long golden hair, now lined with silver,
lifted in the stiff sea breeze as he reached the summit, his feet
braced against the stone.

Aurelia pulled her hood further over her
face. The last thing she needed was for her father to guess of her
disobedience after they had argued so long over her role. She
watched her father’s expression avidly from below, her mouth so dry
that she could barely swallow.

Was it Bard, son of Erc, who came to take
his avowed revenge?

Or had her father’s Viking relations arrived
with aid?

Hekod’s expression turned grim as he scanned
the seas. He swore with rare eloquence and Aurelia’s heart sank,
the truth clear before he even spoke.

Hekod’s eyes blazed like sapphires as he
pivoted to address his men. “That can be no Viking sail!” he
roared. “Bard, son of Erc, dares to attack Dunhelm! To arms! To
arms!”

With those words, chaos erupted.

The ladders leaning against the defensive
wall creaked with the warriors’ haste to climb to the summit.
Swords caught the sunlight as they were unsheathed, the freshly
honed blades of battle axes gleamed dangerously. Prayers were
muttered and amulets kissed. Helmets were donned and leather
jerkins laced among the Viking warriors, while the Picts boldly
bared their tattooed flesh.

“
The murderous swine dares
to tempt a father’s wrath!” Hekod raged above the confusion, waving
his own sword high in the air. The men stamped their feet in
support. “Let him taste the bite of my blade!” The warriors
bellowed. “Like father, like son, say I. Let Bard meet the Nairns
by my hand as did his sire before him!”

The fighting men shouted their approval of
this sentiment. The war horns were blown in a cacophony of sound
and all attention turned to the sea.

Aurelia took advantage of the moment to dive
out of her hiding place and hastily retrieve her bow. Her heart was
pounding with the threat of discovery as she discarded the cloak
that had hidden her garb this morning. The tunic beneath was
purposefully short, the leggings and boots practical garb that
Aurelia had worn little since her sire determined her to be of
marriageable age.

Evidently, in her father’s mind, even
marriageable Viking women did not wear short tunics or shoot
crossbows. But Aurelia knew the defense of her home was more
important than mere modesty and protocol, whatever Hekod’s views to
the contrary.

She tossed her long fair braid over her
shoulder as she turned, standing as tall as a woman of tiny stature
could. Aurelia was ready to face opposition, yet found none aware
of what she had done.

Perfect. There was no time to waste on such
nonsense, at any rate.

Aurelia simply could not sit by when all she
held dear hung in the balance. Even her sire could not dispute that
she was the best archer in Dunhelm - and Aurelia’s duty could be
nowhere else but in the defense of her home.

Hekod was not the only one who thirsted for
vengeance, after all. It was no small thing for Aurelia to carry
the proud legacy of Viking blood and, to her mind, Hekod - the
Viking responsible for that mingled blood - should have
understood.

Aurelia scrambled up the ladder and posted
herself a goodly distance away from her perceptive sire. The men on
either side of her did not even warrant her arrival worth a
questioning glance. Aurelia lifted her face to the sea, triumphant
at her success thus far, but her heart trembled at what she
saw.

A trio of ships crested the brilliant blue
of the seas, their prows cutting through the waves with a purpose
that could not be denied. Not one, but three ships came to
battle!

These certainly were not the graceful Viking
ships that all had hoped would arrive at Dunhelm first. These
vessels were all of diverse and humble origins, their rigging
cobbled and patched, their paint chipped and their hulls devoid of
ornamentation.

Such sorry craft befitted a thieving vagrant
like Bard, son of Erc. A dark hatred filled Aurelia’s heart and a
tear blurred her vision as she recalled how this loathsome man had
deceived her sole brother.

If Aurelia had anything to say about the
matter, Bard, son of Erc, would not survive this day. She looked to
her sire and saw the same grim determination harden his weathered
visage.

The waves pounded on the wooden hulls of the
ships as they drew near, the wind snapped the sails. Two men leapt
from the lead ship and hauled it in toward shore, the waves coming
above their waists. The individual men aboard the ships become
distinguishable as the craft were drawn closer.

Aurelia was dismayed to see how numerous
they truly were. The deck of each ship fairly bristled with
weaponry.

There was a strange interval of silence on
the walls in this moment, as though all looked into their hearts in
the face of such odds and understood that this day would change
their very lives. Many would not survive this battle, Aurelia knew,
for Bard brought greater forces than anticipated. And without the
Vikings to swell their ranks, Hekod’s forces would be hard-pressed
to hold Dunhelm.

The Tokyo-Montana Express by Richard Brautigan
The Earl Who Loved Me by Bethany Sefchick
Charlotte & Nate (Royals of Valleria #4) by Marianne Knightly
See Jane Date by Melissa Senate
Boyett-Compo, Charlotte - Wyndmaster 1 by The Wyndmaster's Lady (Samhain)
Love’s Sacred Song by Mesu Andrews
Tropical Depression by Laurence Shames
The Smile of a Ghost by Phil Rickman
Never Go Home by L.T. Ryan
The Lost Testament by James Becker
Our partner