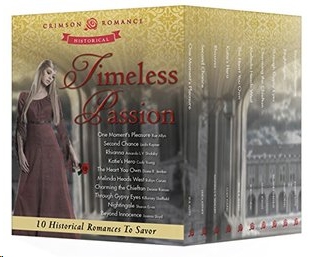 The Heart You Own

Book 1 of the Wildfire Love Series

To Patti Shenberger and all the RWA sisters who have helped me hone my craft and understand the writing business during this author’s journey to publication. I still have very much to learn.

A Sneak Peek from Crimson Romance

I’d like to acknowledge the significant contribution of several people. First I wish to thank Julie Sturgeon, my very perceptive and patient editor, for all the insights that made
One Moment’s Pleasure
a much better book. Of course without the efforts of Jennifer Lawler and the Crimson Romance publishing team for seeing the potential in Edith and Dutch’s story we would not have
One Moment’s Pleasure
; my thanks to you all. Most important I’d like to acknowledge all the readers who enjoy my stories. Your support and encouragement throughout the years means the world to me. I hope I get to thank you all personally.

In San Francisco, given enough money, any item can be bought and any crime hidden. The photograph above, smuggled out by a resident, shows the depravity of fallen women that runs rampant through the city, even at elegant addresses like that of Madame Cerise Duval. In a peculiar twist of fate, the photographer is rumored to have been murdered by one of the residents of the house. An unidentified blond woman, with a distinctive scar on her left temple, is said to have killed Mr. F. Lyn Whitson and absconded with the man’s photographic equipment. The woman is believed to be somewhere in the San Francisco area and is being sought for questioning.

For the hundredth time, Edith read the newspaper article she found among the papers in her grandfather’s desk, along with that absurd will. The woman couldn’t be anyone but her sister Kiera, who’d fled to San Francisco to avoid the marriage Grandfather arranged for her. Kiera was a photographer. Kiera was blond. F. Lyn Whitson was the name Kiera used to sell her photographs, since the men who purchased them refused to buy from a woman — as if a woman couldn’t know how to take a photograph. The article was written by a man as well, and he’d obviously gotten some of the details wrong. Muddled details or not, clearly Kiera is in trouble.

“Mae,” Edith spoke to her youngest sister. “I must go to San Francisco.”

Weaving her way through the crowds thronging the Oakland Long Wharf railway terminal, Edith Marietta Alden of the Boston Aldens finally attracted the attention of a lanky Chinese man with a large wooden pushcart. By means of hand gestures and a few carefully enunciated words she indicated he should transfer her sturdy, metal-bound trunk from the baggage car to his trolley. While she waited she studied her surroundings and tried not to gawk. She remained optimistic about finding her middle sister despite what she saw. San Francisco was not the Golden Gateway her guidebook claimed, but it was exiting.

Ash from the puffing engines coated the depot walls. Bells clanged, porters and railway officials yelled a confusing mix of questions and instructions in a variety of languages. At the top of their lungs vendors cried their wares: souvenirs, foodstuffs, parasols, flowers, even slippers for the comfort of travelers. An amalgam of scents — meat, herbs, burning coal, and unwashed bodies — nauseated any traveler inexperienced enough to inhale deeply. Edith quickly learned to take shallow breaths. She knew every city had its seamier elements, but she would not let masses of people, dirt, and unending cacophony crush the hope she’d nurtured over the long journey from Boston.

“Is all bags, Missee?” The porter looked at the claim check then at Edith.

She scarcely heard him over the din but shook her head and gestured to the two cases resting on the platform at her feet. “No, no. These two carpet bags as well.”

“Good. I get.” The man bent forward and lifted the bags.

As he straightened she saw his eyes go wide. He tossed the cases at something behind her then, pushing his cart before him, ran toward the depot’s main entrance.

“Wait,” she shouted. But the porter raced away.

People in the man’s path leapt aside.

Edith didn’t pause to retrieve her bags. Without the letters and money contained in the trunk she had nothing to guide her search for Kiera or help her sister fight the charge of murder leveled against her. Edith lifted her hem, dashing off after the cart and its precious burden.

The porter passed the end of the train. Empty track lay on both sides of the platform with the main terminal just beyond.

“Stop that man,” yelled a voice from behind.

She ran faster, but hampered by her skirts, she didn’t add much speed. In her peripheral vision she saw two men in business suits pass her and pelt after the fleeing porter.

With the men three steps in front of her the porter, still running, reversed his direction and shoved the cart at his pursuers then continued his escape.

The shorter business man dodged the hand-trolley and increased his pursuit.

The pushcart picked up speed.

Mesmerized by the wooden behemoth bearing down on her, Edith slowed.

A blow from her left knocked her from her feet and sent her flying toward the edge of the platform. The force pushed her hat into her face.

Breathless, she lay on the hard surface. Her head spun, and her bones ached. A weight smashed her torso and heated her body. Needle sharp prickles fired every nerve ending.

The cart rolled across the out-flung skirt of her navy serge traveling dress, passed inches from her head then crashed onto the tracks.

The pressure on her chest eased slightly, but the heat remained. She coughed, trying to breathe.

The sound of footsteps fading in the distance indicated someone continued pursuing the porter.

Warm breath scented with mint and chocolate passed her ear. She shoved her hat backward leaving her thick veil the only barrier between her nose and a pristine white shirt that smelled of starch and man. The weight lifted completely. She stared at the suit trousers and dusty black shoes before her until a large, calloused but clean hand blocked her view.

Gripping the hand, she allowed the man to help her up. She adjusted her hat and veil, inhaled several short breaths then straightened her skirts.

Edith lifted her gaze. She received a jumbled impression of strength, long legs, narrow hips, wide shoulders, a tumble of wheat blond hair, serious blue eyes under reddish eyebrows, and a generous mouth. He was smiling, though she couldn’t imagine what he might have to smile about.

Unaccountably, she smiled back at him.

“Are you all right?” he repeated. His voice, no longer hard, played along her nerves. The fiery, sharp tingles she thought the result of air-deprived lungs now centered in her core. Again she found herself breathless.

A concerned frown chased the smile from his face. “You’re still overcome. Here, sit down while I retrieve your luggage.” He grasped her elbow and led her to a bench. Then he shed his suit coat. Draping it beside her, he leapt down onto the rails.

Even beneath his linen shirt, she could see the easy play of muscles as he lifted her trunk onto the platform. She lowered her gaze, trying to behave like the lady she was raised to be.

Several workers arrived, and the man helped clear the wreckage from the tracks before placing her luggage beside the bench.

Not even breathing hard from his exertions, he stood before her and extended his hand. Nonplused Edith stared at the hand before taking it in her own. In Boston a man would never presume to shake hands with a woman unless she first offered hers. But this was San Francisco, the Wild West. No doubt different manners applied here. Perhaps here, she could be free as she never could in Boston.

“Dutch Trahern at your service, Miss … ?”

How awkward. No one was supposed to know she was in San Francisco. A female member of a family as wealthy as hers would never travel unaccompanied or deliberately seek out a bordello Madam. However, rescuing Kiera required drastic action. Back home Mae would explain Edith’s absence with the story that she was visiting relatives in Maine. She didn’t want to give the man her name. But he’d saved her from serious harm, perhaps even death. He didn’t deserve the lie she felt compelled to tell. Her face flushed as she swallowed against guilt. “Mrs. Ebenezer Smithfeld.”

His smile faltered minutely. “Delighted, Mrs. Smithfeld. Are you bound across the bay to San Francisco? May I escort you to your destination?”

“Thank you, no, Mr. Trahern. I am grateful for your help, but I’m meeting someone.” Her voice shook. Hopefully he would think she was still distraught from nearly being run over. And she must be or she would have thought of a better lie. She knew no one in San Francisco. If Mr. Trahern lingered, her falsehood would soon become apparent. Unable to continue meeting his glance she bowed her head and stared as her fingers pleated the fabric of her skirt. He unsettled her, and she didn’t know why. She did know that the sooner they parted ways the better.

He seemed rooted to the spot, so she raised her head a bit and watched his gaze travel around the nearly deserted terminal. Only railway employees remained. All the passengers and vendors had moved into the waiting room and ticketing office or beyond.

His stare finally returned to her. “Is it possible that your party forgot or mistook the day?”

Edith ordered herself to stop fidgeting. She squared her shoulders to present a confident façade.

“More likely
he
has been delayed.” She stressed the male pronoun. Mr. Trahern might be more inclined to leave if he thought she waited on a man’s arrival.

“Then allow me to be your escort, please.”

She felt the blood drain from her face. The man was too persistent by half. “I … I couldn’t desert my friend.”

“You can leave a message for him at the ticket window. I promise to take you directly to your hotel and deliver news of your safe arrival to your friend personally.”