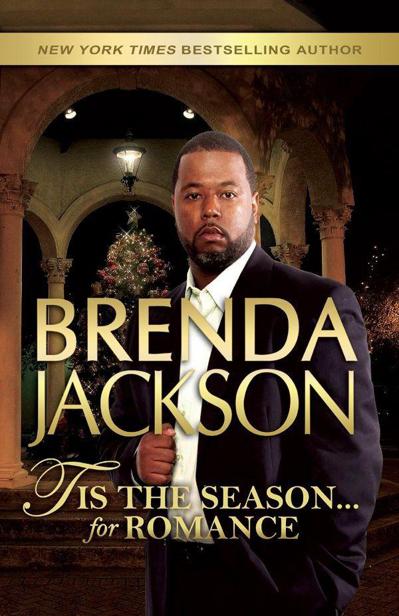 TIS THE SEASON...
FOR ROMANCE

Love, Passion and Promise
An Imprint of the Madaris Publishing Company
www.madarispublishing.com

LOVE, PASSION AND PROMISE books are published by

All rights reserved. No part of this book may be reproduced, stored in a retrieval system, or transmitted in any form or by any means without the prior written consent of the Publisher.

AUTHOR BRENDA JACKSON
BRINGS YOU FOUR UNFORGETTABLE STORIES UNDER HER
LOVE, PASSION AND PROMISE IMPRINT
TIS THE SEASON… FOR ROMANCE
READY FOR LOVE
THE SECOND TIME AROUND
CONQUERING HIS HEART
COREY’S MOUNTAIN

I proudly present to you the third book from the Madaris Publishing Company,
Tis the Season…for Romance.

This book is special in that it contains all new stories. I want to thank you for sending me your emails with your thoughts and ideas on what characters you would like to see in this book.

In my story,
Ready for Love
, I’m bringing back a woman who I introduced in my novel,
Her Little Black Book
. Barbara Andrews was the mother of the heroine, Courtney, and I received a lot of emails asking for her story, and I’m happy to present it to you.

In
The Second Time Around
, you’re reacquainted with more secondary characters from my story,
Her Little Black Book
. This is Peggy Morrison’s story and she is a woman who has come a long way since she was first introduced as Sonya Morrison’s mother in The Savvy Sistahs.

In
Conquering His Heart
, we visit with those Jeffries again and you see how the ever efficient secretary Cathy Bristol, gets her man and proves once again that love conquers all. Cathy was first introduced in a Westmoreland novel,
Tall, Dark Westmoreland.

And last but not least is
Corey’s Mountain
. This book is special in that when writing Stone Cold Surrender that took Madison Winters on a quest to find her mother, and right straight in Stone Westmoreland’s arms while doing so, I wondered why and how her mother, Abby Winters, got lost in the first place and how did she end up on Corey’s Mountain. I have a weakness for “first love – forever love” stories, and after reading this book you will see why.

This is my seventieth book and if there are characters from any of those books that you would love to see in their own story, please let me know at [email protected]

To visit my website, please click on www.brendajackson.net or you can visit www.madarispublishing.com for additional information on future books.

Special thanks to the love of my life, Gerald Jackson, Sr. who is my hero.

To my family whose undying support has always been there through thick and thin.

To my sons, Gerald Jr. and Brandon, whom I am very proud of and who challenged me to put into practice what I’ve always told them... “If you can conceive it then you can achieve it.”

And to my Heavenly Father, who loves me and gives me the talent to write and the desire to reach my full potential.

To my readers, who after reading
HER LITTLE BLACK BOOK,
wanted Barbara Andrews’ and Rick Blair’s story.
This one is for you.

Pleasant words are a honeycomb,
sweet to the soul and healing to the bones.

Barbara Andrews walked into Ron’s hospital room to find the nurses had raised him up in bed. Her husband had begun regaining consciousness a day or so before and had spoken briefly with Detective Rick Blair confirming that Melissa Langley had been the person who’d pulled the trigger. Ron had yet to be told that everyone knew about his Hawaii tryst with Ashira Wilson. The woman had come to the hospital a few times, demanding to see him, but Barbara had requested that hospital security keep her from doing so…for the time being.

She saw how Ron tried to smile when he saw her. Any other time his smile would have been all she’d needed to forgive his womanizing ways, but not this time. Not anymore. Those days were over. “I was wondering when you were coming,” Ron said in a slurred voice. There was a tube that went through his nose that still made talking difficult for him.

“I told you last night that I would be back this morning,” Barbara said. She had stopped staying all night. She refused to sleep uncomfortable any longer in the cot the nurses would bring in. He didn’t deserve that of her. “Ron, we need to talk,” she said, deciding this would be the day she made him aware of what she knew.

She wondered if it was true confessions time for him. If coming so close to death had made him a “changed” man. If so, he could continue to go through his transformation without her. She would no longer be a part of his life. “There is no need, Ron. If you want to tell me about Ashira Wilson, don’t bother. She’s told me everything. I know you paid for her to go to Hawaii with us.

“No. Please don’t,” she said, holding up her hand. “Please don’t make matters any worse by apologizing. You did what you did because it was what you wanted to do, without any care or concern about me. Over the years I’ve put up with your affairs, but no longer. What you did in Hawaii is unforgivable. You put me at risk. You-”

“No, Barbara. I never had sex with any of the others without using a condom. I would never do that to you,” he said in a whispered tone.

“But there should not have been a need for a condom, Ron. I was your wife. The only woman you should have been sleeping with. But -”

“I’m sick, Barbara. I have this sexual addiction and I plan to get help.”

She nodded, believing him. But for her, it didn’t matter. It didn’t make a difference. “I’m glad Ron, and I hope the next woman you marry reaps the full benefits of your recovery.”

“I don’t understand what you mean.”

She inhaled deeply. “I’ve filed for a divorce. According to what Ashira Wilson is saying, you were going to divorce me anyway to marry her.”

“It doesn’t matter. She’s told so many truths about certain things that her lies don’t make a difference now. According to the doctor, if you continue to improve, you’ll be able to go home in a week or so. I won’t be coming back to see you. I had a moving company take your belongings to an apartment I’ve gotten for you. It’s close to your job and should be convenient. Things between us end here, Ron. I wish you the best.”

Instead of having anything else to say or giving in to his pitiful plea, with her head held high she turned and walked out the room.

Barbara Andrews let out a groan when she glanced at the stack of papers her secretary had placed on her desk. Thanksgiving was fast approaching and it had become a tradition at Universal Studios in Orlando to host the lighting of the Christmas tree. The event always drew a large number of people and as head of the marketing department, she and her staff had been promoting the event for months.

Barbara glanced at the sound of the intercom buzzing on her desk. “Yes. Lila, what is it?”

Barbara grimaced. She had missed her last appointment with Dr. Banks. After her breakup with Ron she’d known she needed counseling since she was carrying too much baggage around. And it was baggage she needed to get rid of before she could effectively move on with her life.

The sessions had gone well, but Dr. Banks was convinced she was holding anger inside of her; anger she refused to release. Ron had hurt her deeply; however, she had yet to let loose her anger. Mainly because her mother had raised her and her sister Peggy to be refined and dignified women who behaved in certain ways. They were women taught to be in control of their emotions at all time, and displaying anger to your husband wasn’t considered proper.

She had let go of her emotions once a few years ago, and that had been when she’d caught Ron in bed with another woman. In a fit of rage, she had broken up dishes and furniture and had littered the front lawn with his belongings. She had embarrassed her family when the neighbors had seen the display. For all the good it had done, less than six months later she had forgiven him and had taken him back. Since then she’d vowed to keep a tight rein on her emotions.

“Thanks, Lila, please put them through.”

As soon as she heard the click on the line she said. “Yes, this is Barbara Andrews.”

“Ms. Andres, we need to confirm your appointment with Dr. Banks for next Friday.”

Barbara pulled in a deep breath. In a way she felt they were sort of at a stalemate, although Dr. Banks didn’t see it that way. He wanted them to continue with the therapy sessions and work on anger management, which in her case was letting it out in a constructive way, instead of holding it in, in a self-destructive way.

“Yes, I will keep my appointment,” she said, knowing that she really needed to do so since she felt there were unresolved issues she needed to adequately deal with.