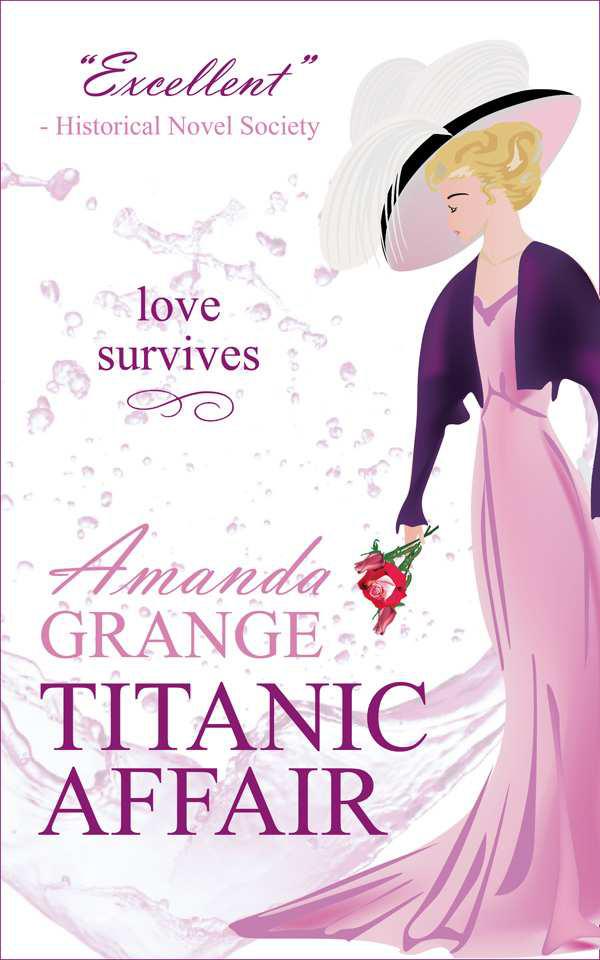 No part of this publication may be reproduced, stored in a retrieval system, or transmitted in any form or by any means without the prior permission in writing of the publisher. Nor be otherwise circulated in any form of binding or cover other than that in which it is published and without a similar condition including this condition being imposed on the subsequent purchaser.

This book is a work of fiction. Except where actual historical events or characters are being used for the storyline of this novel, the characters and incidents are either fictitious or are used fictitiously. Any resemblance to any other real person or incident is entirely coincidental and not intended by the author.

First published in hardback by Severn House in 2004

It was very important to me, when writing this novel, to make sure that I presented an accurate view of life on board
Titanic
as well as providing a detailed account of the disaster. I researched it carefully from contemporary newspaper articles, survivors’ accounts and official documents to provide authenticity. Sometimes the eye-witness accounts varied and in these cases I used the account which best fit my story. Woven into the accurate portrayal of
Titanic
’s voyage and ultimate sinking is a love affair which transcends the disaster, providing a thoughtful yet entertaining read.

“This is a well-crafted and fast moving story. Using the setting of the maiden voyage of the Titanic takes a degree of courage on the part of any author and in this case it paid off. I was delighted to find a fresh slant on the well-known events of the tragic voyage. What stands out is the excellent use of historical detail such as the Crown Derby china, the electric horse, the
Oxford
marmalade and the author's ability to blend in real passengers like Mr Bruce Ismay, the chairman of the White Star Line, with her fictional characters in a seamless manner.”- Myfanwy Cook,
Historical Novel Society

visit her Kindle page on Amazon

Emilia Cavendish, kneeling in her rented room on a bright morning in the spring of 1912, was packing her portmanteau in preparation for a new life with her godmother. In front of her, the portmanteau was almost full. She looked round the shabby room to make sure she had not forgotten anything, running her eyes over the iron bed, the chest of drawers and the washstand, but the surfaces were all bare. Once she had packed her last dress she would have finished.

Her thoughts returned to her coming journey and her spirits lifted. As long as she could avoid Mr Montmerency for a few more hours then she would be able to escape him. She would be out of his power, and sailing on the
Titanic
for her godmother’s home in
Ireland
.

She finished her packing and was just about to close her bag when her heart skipped a beat, for she heard the sound of footsteps hurrying up the stairs.

No, he can’t have found me, she thought in fright.

A moment later she breathed a sigh of relief as Mrs Wichwood hurried into the room, but the feeling was short lived. The kindly landlady’s face was worried, and Emilia guessed that something dreadful had happened.

‘He’s here,’ said Mrs Wichwood, puffing and panting. ‘Mr Montmerency. I’ve just seen him at the end of the street, and he’s got that Mr Barker with him. He’s found you.’

‘Then I must go,’ said Emilia, springing to her feet and fastening her portmanteau.

‘Yes, dear, get away while you can. Go out the back way, then he won’t see you leave.’

‘Delay them as much as you can,’ begged Emilia. ‘Make them wait at the door and then keep them talking for as long as possible.’

‘Don’t you fear, I’ll do my best. You just worry about getting yourself down to the harbour. Good luck, my dear.’

Emilia picked up her bag then ran down the stairs and into the kitchen.

‘Write to me from
Ireland
,’ said Mrs Wichwood, following her. ‘I won’t be easy in my mind until I know you’ve escaped.’

‘I will, I promise,’ said Emilia, opening the back door.

‘And if he gets you before you reach the ship, you send word to me,’ said Mrs Wichwood. ‘I’ll find a way to help you, somehow.’

‘Dear Mrs Wichwood, what would I do without you?’ said Emilia gratefully. She gave the elderly woman a hug. ‘Don’t worry, I’ll make sure they don’t catch me,’ she said.

Then opening the door she stepped outside. She turned right and headed towards the harbour. Running through the streets, she dodged horses and carts, and threaded her way through the throng of people all heading for the quayside as they went to see the great ship set off on its maiden voyage. She turned into a side street, meaning to take a short cut . . . and saw Silas Montmerency at the other end of it. Fortunately he had not seen her. He was standing with his back to her and he was looking around him in an attitude of exasperation. He must have been to the house and discovered that he had missed her, but she reassured herself with the knowledge that he had no idea where she was going. He knew only that she had changed her lodgings again, as she had done many times over the past few weeks in a desperate bid to escape him. He had no idea she was about to leave the country.

She turned back and ran down the main street instead. The tang of salt in the air and the crying of the gulls told her that she was drawing near the harbour, and she soon found herself next to the South Western Hotel. Ahead of her was the ship. Dwarfing the White Star Line shed that stood next to it, it rose majestically from the water, and was every bit as splendid as the newspapers had claimed it to be. Its white paintwork sparkled on the upper decks and its black-topped funnels shone in the spring sunlight. But Emilia saw only one thing as she looked at it: a means of escape. If she could just cross the remaining few hundred feet she would be free.

The dock was teeming with activity. Vans were sounding their horns as they tried to deliver last-minute supplies, horses were mixing with motor cars, and everywhere there were sightseers, marvelling at the pride of the White Star Line.

Emilia slowed her pace and began to mingle with the people milling all around her. As long as she behaved just like everyone else then she would not draw attention to herself. Bit by bit, she drew closer to the ship. But just as she approached the gangplank she saw Barker, Mr Montmerency’s henchman. He was not ten feet away, pushing his way through the crowd. If he looked round and saw her . . . She quickened her pace and felt her spirits lighten as she reached the gangplank. Every step would help her now. She followed a beautifully dressed mother and daughter up the gangway to the towering ship, and almost laughed as she reached the top and stepped on board. There was nothing either Silas Montmerency or Barker could do to her now, because even if they saw her, they did not have a ticket, and they would not be able to follow her. She was safe!

She began to make her way through the ship, looking about her with interest. She had never seen anything so magnificent in her life. Walking through one splendid room after another, she was amazed at how large the ship was, and thought it was more like a grand hotel than an ocean liner. Potted palms were set in nearly every corner, graceful columns supported the  high ceilings, and the decorations gleamed with gold.