Read Tooth for a Tooth Online

Tooth for a Tooth 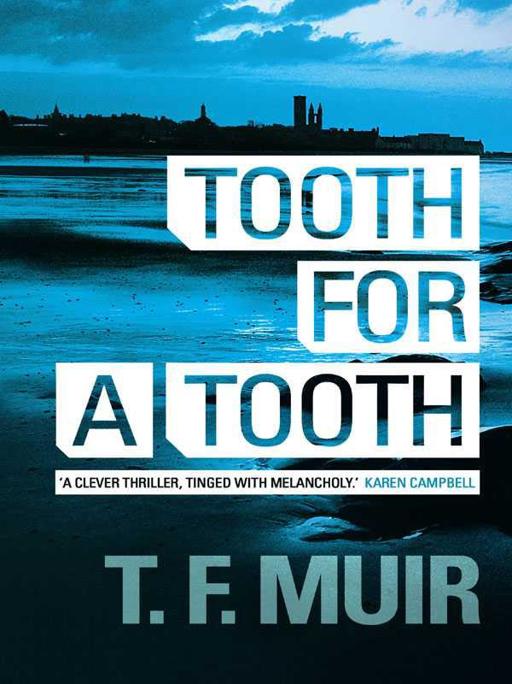 Born in Glasgow and now a dual UK/US citizen,
T. F. Muir
is currently working on his next Andy Gilchrist novel, another story suffused with dark alleyways, cobbled streets and all things gruesome.

‘Everything I look for in a crime novel.’

‘Rebus did it for Edinburgh. Laidlaw did it for Glasgow. Gilchrist might just be the bloke to put St Andrews on the crime fiction map.’

First published in the UK by Robinson, an imprint of Constable & Robinson Ltd, 2012

The right of T. F. Muir to be identified as the author of this work has been asserted by him in accordance with the Copyright, Designs and Patents Act 1988

To the memory of Craig Martin Stevenson

In almost every work of fiction an author will seek the assistance and guidance of others in an effort to improve the authenticity of the tale. In that respect, this book is all the better for input from the following: Jan den Dulk, Gloria del Carmen Echeverria and Simon Vilarasau Slade, for Spanish translation; Gayle and Kenny Cameron of Fife Constabulary and Sheriff Jim Bowen of Saratoga County Sheriff’s Office, NY, for police procedure; Rob Dinsdale for editorial and plotting advice without which this story quite simply would never have been published; Jenny Page for exacting editorial assistance; Al Zuckerman for expert guidance in fine-tuning structure and plot; Krystyna Green for having the courage to take me on board; Nicola Jeanes and other staff at Constable and Robinson for working hard to see this book make it into the bookstores; Heather Holden-Brown for her tireless efforts when other literary agents would have dropped me like a brick; and finally Anne, for putting up with me, believing in me, and loving me all the way.

This book is a work of fiction. Those readers familiar with St Andrews and the East Neuk may notice that I have taken creative license with respect to some local geography.

Any and all mistakes are mine.

Detective Chief Inspector Andy Gilchrist stood alone at the back of the chapel as the curtains closed on the coffin of his ex-wife. He barely heard the prayer of committal as he watched his son, Jack, in the family group in the front pew, place an arm around Maureen. Beside them shuddered the grieving figure of their stepfather, Harry. Even now, at the moment of Gail’s final parting, Gilchrist could not find it in his heart to forgive Harry.

As the chapel emptied, Gilchrist held back, tagging on to the end of the mourners, each giving their condolences to the family line as they shuffled through the vestibule.

Jack gave him a sad smile of surprise. ‘I didn’t see you.’

Jack’s grip was firm, a son-to-father handshake meant to assure Gilchrist that Jack would be strong for all of them. The tremor in his chin said otherwise.

Gilchrist pulled him closer, gave him a hug. ‘Mum’s no longer suffering,’ he said.

Jack nodded, tight-lipped, as they parted.

Maureen went straight for a hug. ‘I wasn’t sure you’d come.’

Even through her heavy coat he could feel her bones, her body light enough to lift with ease, it seemed. She was thin, too thin. He tried to say something, but found he could not trust his voice. Instead, he hugged her tighter, breathed her in, pressed his lips to her ear.

He gave Harry a firm handshake and a wordless nod, conscious of Maureen’s eyes on him, searching for signs of forgiveness. Then he was down the stone steps, marching across the car park, avoiding eye contact with family friends he did not know. From his car, he watched Jack and Maureen leave the chapel hand in hand, Harry in front, defeated, alone. And something in that simple formation told Gilchrist that Harry could never fill their paternal void.

He caught Maureen’s eye as she prepared to step into the funeral car.

Are you coming back?
she mouthed to him.

He nodded as she slipped from his view, then he powered up his mobile and saw he had two missed calls, both from Stan.

Gilchrist switched on the ignition, slipped into Drive. ‘Keep going.’

‘In Dairsie Cemetery. Uncovered while the lair was being opened for another burial. No coffin, and not six feet under, boss. So we’re definitely thinking murder.’

Gilchrist eased his Mercedes SLK Roadster forward. Ahead, the funeral car cruised through the crematorium grounds, grey exhaust swirling in the October chill. The wake was being held in Haggs Castle Clubhouse, the golf club where Harry was a member. Gilchrist knew he should attend, for Jack and Maureen, for Gail’s memory, too. But the thought of faking a face for Harry decided it for him.

Gilchrist walked through the gate in the old stone wall and into the cemetery grounds.

By a gnarled willow tree in the far corner the forensic tent was erected. Yellow tape looped around it from headstone to headstone. As Gilchrist approached, Stan broke the connection on his mobile with a slap of its cover.

‘This skeleton,’ Gilchrist said, as he pushed his feet into his coveralls. ‘Is it in good nick?’

‘Right thigh bone chopped through by one of the gravediggers. But other than that, it seems perfect.’

‘Whose plot were they preparing?’

‘A local by the name of Lorella McLeod. Fair old age of eighty-seven. Passed away at the weekend and was to be laid to rest in the family lair next to her husband, Hamish. He died in ’69. So the grave’s not been touched for thirty-odd years.’ Stan shook his head. ‘Already checked our misper files for ’68 to ’75, and came up empty-handed.’

‘What about the PNC?’

‘Got Nance doing that, even as we speak.’

Gilchrist pulled his coveralls up and over his shoulders, his mind working through Stan’s rationale. ‘Did the McLeods have children?’ he asked.

‘For the last what, thirty-five years?’

‘So I’m told, boss. But I haven’t confirmed that yet.’

Gilchrist looked away. Tree-covered hills were already greying with the coming of winter. It seemed unimaginable for someone to live by themselves for that length of time, and he wondered if the end of his life would be as destitute. Sadness swept through him at that thought.
The end of his life
. Or more correctly,
part
of it. Gail was now gone, and he worried he would spend even less time with Jack and Maureen. He forced his mind to focus on the present, and eyed the forensic tent.

‘So, Stan, it looks like we’re dealing with a thirty-five-year-old murder.’

‘Bit soon to jump to that conclusion, boss. The body could have been buried any time since the burial of Hamish McLeod.’

Gilchrist zipped up his coveralls. ‘But why was it buried in
that
grave, Stan? Have you asked yourself that?’

Stan scratched his head. ‘It’s difficult to imagine a more perfect place to hide a body. I mean, who would look for it in a cemetery?’

‘But why that particular grave?’

‘Because it would have been
fresh
, that’s why. And if there is no coffin, there was no funeral. And if there was no funeral, no one knew about it. Therefore, we have a thirty-five-year-old murder on our hands.’ He stared off to the edge of the cemetery and the open fields beyond. Scotland in the sun was like no other place on earth. But its blue skies offered only false promise of a fine day. ‘Not exactly thriving, is it, Stan?’

Gilchrist almost smiled. ‘Ever been here before, Stan? In this cemetery?’

‘Neither have I. Which makes me think neither have a lot of people. So start off by making a list of all those who attended McLeod’s funeral.’

Stan livened. ‘I’ll get on to it, boss. Door to door, discreet like, see who knows what,’ he said as he walked away.

From the outside, the
Incitent
gave the impression it would be cramped and dark, but the interior was suffused with a yellow light that seemed to lend a reverential quietness to the scene. Gilchrist counted four transparent plastic bags next to the open grave, each filled with bones the colour of mud. A row of larger plastic bags, full of earth, lined one wall like in a garden centre. A camera sat on a silver metal case. Four Scenes of Crime Officers worked in silence, while Gilchrist watched.

One SOCO sifted through a heap of soil at the side of the grave. Another placed more muddied bones into a fifth bag, while two more scraped soil from the bottom of the opened grave with the focused intensity of biblical archaeologists. As Gilchrist stepped forward, one of the SOCOs in the grave looked up. Despite coveralls that hid his balding pate and made his face look round and tight, Gilchrist recognized Bert Mackie, not a SOCO but the police pathologist from Ninewells Hospital in Dundee.

‘I expect you mean have we found any items of identification?’

‘That’ll do for starters.’

‘Afraid not, Andy. All we have at the moment are bones. No watches, no jewellery. And the clothes have deteriorated to rags. Looks like she was wearing some sort of nylon jacket, but it’s difficult to say at this stage—’

‘The bra gives the game away. Unless
he
was trying it on for size. Interestingly,’ he added, scowling at a muddied bone, scraping at it with his thumb, ‘she appears not to have been wearing any knickers.’

‘Could they have rotted away?’

‘I’d expect to find traces of elastic.’ Mackie shook his head. ‘None so far.’

Gilchrist wondered if that was important. Why wear a bra, but no knickers? Had she just had sex, perhaps a
quickie
, and something was said that ended in violence? Had she been raped, then murdered? Or did she simply like to walk around feeling free and airy, so to speak? ‘Any ideas on her age?’ he asked.

‘I’ll be in a better position to confirm that after a full postmortem, of course. But if I was pushed, I’d say late teens, early twenties.’

Gilchrist squatted by the open grave. ‘This no knickers thing,’ he persisted. ‘Any thoughts?’

‘Sex is always a grand motive,’ said Mackie. ‘He wants some. She doesn’t. He’s drunk. They argue. Turns into a fight, and before you know where you are he has a fit and batters her to death.’