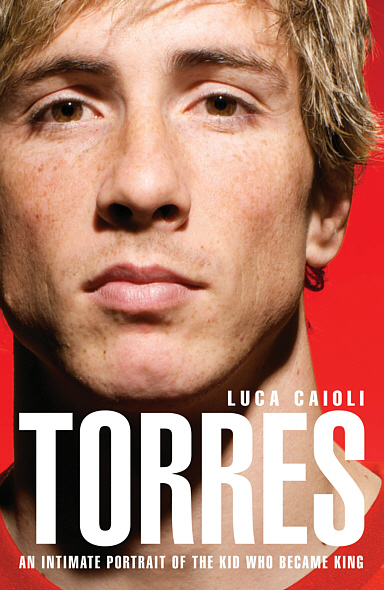 An Intimate Portrait of the Kid who Became King

This electronic edition published in 2009 by Corinthian Books,
an imprint of Icon Books

The author has asserted his moral rights.

No part of this book may be reproduced in any form, or by any
means, without prior permission in writing from the publisher.

Thoughts and reflections from the Kop

‘I love him. He’s great. For someone from Spain, he embodies everything we want from our Liverpool players. I mean, obviously, we’ve got Gerrard and Carra who represent the spirit of the club but he’s stepped into the Liverpool history and culture like he’s been there all his life.’
Sarah

‘He was a Red long before he played for us.’
Dave

‘He’s basically a legend. He’s such a great guy. If I could have his babies I would.’
Archie

‘There was scepticism about how many goals he’d score here but in his first season he got 33. He’s also a very humble man so he’s very popular.’
Paul

‘He’s one of the best strikers in the world.’
Ryan

‘It’s not just that he’s a very good striker. He works really hard, he defends from the front. He chases down a lot of defenders and
doesn’t give them time on the ball which makes it easy for the rest of the team.’
James

‘He’s one of the best players we have. He’s probably far more skilful than any goalscorer we’ve ever had in Owen, Rush, Fowler …’
Dennis

‘His physicality is suited to the English game but it’s more to do with his personality and his character for me. He’s a totally great lad. He’s down-to-earth, working class, same as us (from Fuenlabrada, and it’s quite similar to a lot of places in Liverpool), so we’ve really taken to him and he’s really taken to the fans as well. If you see him in the street, he’s happy to talk to people.’
Bessie

‘He’s unique. Under Benítez, he’s getting into space better and found a different dimension to his game’.
Neil

‘He’s a fantastic player – good movement, he’s quick. Quick with his feet, quick with his mind. He’s a great goalscorer. He’s got a good empathy with the crowd. He’s very well-liked.’
Chris

‘He’s a god. It’s what he brings to the team. A different dimension.’
Franco

No one at Anfield refuses to answer questions about El Niño. There are still two hours to go before the match gets under way but there is already a big buzz around the historic stadium. Scarves, party hats, flags and red shirts are everywhere, with people going this way and that. A man holds his son’s hand in the queue to enter the club museum
and admire the Liverpool trophies. Others slip into the Reds’ souvenir shop, take up positions near the main stand entrance to see the players come in, pose for a typical photo in front of the Bill Shankly statue, desperately search for a ticket to see the game (despite constant PA announcements that the match has long been sold out), wait for old friends, ask which entrance to go in by, buy last-minute match programmes and give up any hope of entering The Albert (the pub right next to The Kop, opposite the new Hillsborough Justice Campaign Shop on Walton Breck Road), a heaving mass of bodies, noise, songs and pints. Red is the overwhelming colour but rumours are that is because it’s full of Norwegians and other ‘out-of-towners’.

And standing in the pub doorway is Jan, a fan who has indeed come all the way from Bergen in Norway just for the game. He steps outside for a cigarette. What does he think of Torres? ‘He’s young, he’s got the speed, the ability. He’s got everything. He’s popular because of his attitude, the way he presents himself. He’s very young but also very mature. He shines a kind of charisma that people adore.’

An English friend, Robert, butts into the conversation to give his opinion: ‘We like his humility. We like the way he loves Liverpool Football Club. He’s not one of these players who just signs up for the money. He’s got a genuine love of Liverpool Football Club and that’s reflected in the supporters who actually love the man. You’ll see Torres tattoos, Torres shirts, banners.

‘Everything’s for Torres because he’s for the club, which this club hasn’t had for a long time, since your Ian Rushes or your Kenny Dalglishes. He has his own songs. He’s one of us. When he hears his name sung, his heart beats. He wants to play for the club. You don’t get that very often in the modern game.’

Gus reinforces the message: ‘Liverpool is very much a working-class city. A player like Torres comes along, plays the same way and connects with the fans and that ethos. The fans love him. He loves the fans. It’s a match made in heaven.’

There is more in the same vein, this time from Sean: ‘I think he’s got a rapport with the fans. He understands them. He understands the passion. He’s committed. Not only that, he’s technically brilliant. He’s fast. He’s pacey. Whereas, at Atlético Madrid, he was struggling for goals, at Liverpool he’s now the striker and we centre our game on him scoring goals and it suits him perfectly.’

Round the corner, Ian, who has a stall of fan memorabilia selling everything from badges to flags, gives his view – economically speaking – of the Torres phenomenon: ‘Definitely worth the money, yes, but Gerrard’s still the one.’

In the club shop, however, they think otherwise. Torres is the top shirt-seller. Inside is Callum, aged ten, closely watched over by his father, who is wearing the Number 9 shirt. They go to every home game. What does Callum think of Fernando?

‘It can be frustrating at times when Rafa doesn’t pick him but when he plays he’s a quality player and he knows where the goal is. I like how he can dribble past a lot of players and score.’

Joanna is sitting on a low wall with some friends, eating a plate of sausage and chips with a plastic fork. She happily breaks off to say what she thinks: ‘What I like about Torres is he’s not just speedy. There’s skill in there as well, his technique is fantastic. So he’s married the two really. He’s got the skill and the physicality. He’s the whole package for me.’

Alexandra gives a hearty cackle before making her contribution: ‘His best quality – his looks! Look at my hair!’

A quick glance is more than enough to realise that the Spanish striker is the main inspiration behind her fringe and blonde colouring. And Cecilia adds, with a cheeky grin: ‘We love the Spanish in Liverpool.’

Right in front, and across the street, is The Park – another pub bursting at the seams. To get inside you have to use your elbows but at the same time try not to knock over the huge number of beers squeezed onto the tables. At the bar, waiting for a pint takes time, but conversation sparks up immediately. The only problem is making yourself heard above the songs, chatter and increasingly animated prematch chanting. It’s a fun atmosphere, with the imposing structure of Anfield clearly visible through the window. When one of the throng, with his military shirt and shaved head, hears the question about Torres, he breaks into song. The scarves move, the beer glasses are held high, everyone dances and claps their hands, singing:

You have to wait a bit for the noise go down to a level where you can carry on talking. For some time, a group has been gathered round a table stacked with beers of every type. Initially, no one wants to talk, each trying to persuade the
other to speak. In the end it’s John, with his coloured serpent tattoos and red shirt, who begins: ‘What I like about Torres is that a lot of foreign players come over to England and take some time to adjust, whereas he’s got stuck in. Defenders tackle him hard, but he can still put the ball back in the net. Brilliant.’

Eventually, the others pluck up courage to join in. ‘He’s a very unique striker because he can score long-distance goals, tap-ins, he can do anything really. You’ve got to tie him up for a longer contract,’ says Steve.

Joe, leaning against a doorpost, picks up the same theme, shouting to make himself heard: ‘No matter what happens, he says he’s staying. That’s good. There are too many players these days who are looking elsewhere for clubs but Torres says that Liverpool “is in my heart”.’

Rough Riders by Jordan Silver
The Night the Sky Fell by Stephen Levy
Tinker and Blue by Frank Macdonald
Caught on Camera: Part Three by Lily Harlem
Hard Rocked by Bayard, Clara
The Camel Bookmobile by Masha Hamilton
Paragon Walk by Anne Perry
Stand by Me by Sheila O'Flanagan
The Key To the Kingdom by Dixon, Jeff
Two for Kate by Lola Wilder
Our partner