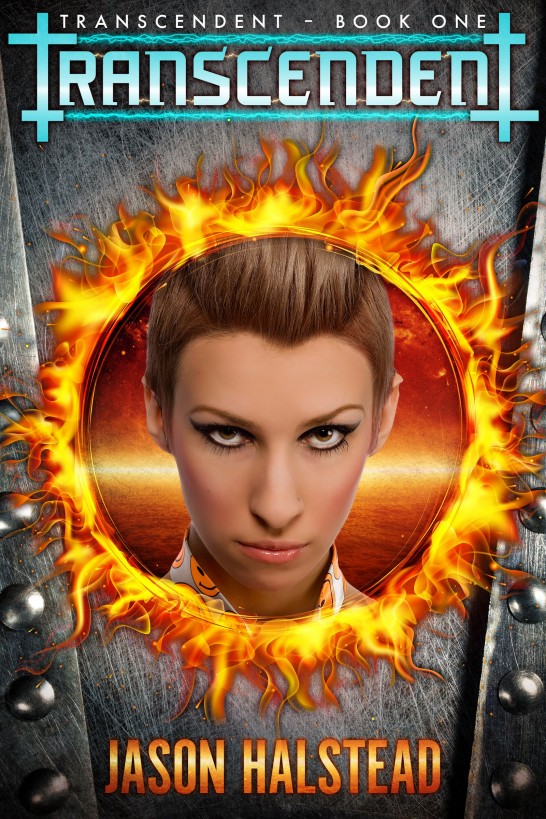 All rights reserved under the International
and Pan-American Copyright Conventions. No part of this book may be
reproduced or transmitted in any form or by any means, electronic
or mechanical, including photocopying, recording, or by any
information storage and retrieval system, without permission in
writing from the publisher.

This is a work of fiction. Names, places,
characters and incidents are either the product of the author’s
imagination or are used fictitiously, and any resemblance to any
actual persons, living or dead, organizations, events or locales is
entirely coincidental.

Warning: the unauthorized reproduction or
distribution of this copyrighted work is illegal. Criminal
copyright infringement, including infringement without monetary
gain, is investigated by the FBI and is punishable by up to 5 years
in prison and a fine of $250,000.

Find Jason Halstead on the web at
http://www.booksbyjason.com

Krys leapt over a root and slid down in the
hollow at the base of the tree. A stream rippled a meter in front
of him, covering his gasping breaths. He tucked himself into the
tree and waited for a count of ten before he pushed himself up and
looked over his shoulder.

“Here I come!” his friend Lily shouted from
the edge of their village.

Krys slid back down and looked to his right.
They weren’t allowed to cross the stream but he saw Pita was
jumping from one rock to the next and then climbing up and over the
bank so she could hide under the fronds of the ferns that grew in
thick patches in the forest. Krys expected Pita’s golden hair to
give her away but in the shadows of the ferns he could hardly see
it.

Krys turned, startled by the whispered hiss
that carried to him. He saw Devon, another friend playing
hide-and-seek, slipping under the overhanging roots and dirt of the
bank to his left. The stream was low now, less than two meters
across. During the spring thaw, it had risen to take up the entire
trench and washed out a lot of the dirt along the sides.

“Did everybody follow me?” Krys whispered
back. He’d hoped to find his own hiding spot. Now, with everyone
else nearby, he didn’t stand much chance of winning the round.

Well, not everyone. Anner had run to the
west, but there wasn’t much to hide behind there, just the crop
fields. The orchards with the handful of fruits that had taken to
the terraformed Venerian soil were on the east side of the colony.
The fields were safer than the pastures where the unruly vison
roamed to the south. The vison were buffalo genetically modified to
handle the long Venerian daylight.

Krys considered leaving his hiding spot
behind and trying to find a new one when a new noise swept over
him. He cringed at the shrill whistle and stood up to peer around
the base of the tree. They were deep enough the forest he could
barely make out the tall structure built to capture the invisible
beam of energy that went from the solar shield in orbit to provide
power to their colony. Other than that, he couldn’t see anything
but trees and bushes.

“What’s going on?” Devon asked as he rushed
over to stand beside Krys. “Is it a solar flare or something?”

A crush of wood breaking was followed by a
muffled thump. Krys turned his head to present his ear to the north
and started to hear other sounds that didn’t make sense to him. It
sounded like trees were falling and sticks being broken. But there
was nothing north of them for hundreds of kilometers.

Pita poked her head up from the ferns and
then stood up. The sunlight that filtered through the genetically
modified trees reflected off her hair, making her head look like it
glowed in the forest. Less than one in twenty thousand people were
born with blond hair and kept it past the age of five. Pita was
thirteen and her blond hair and blue eyes were holding strong.

“Pita, get back here,” Krys called out.
“You’re not supposed to cross the stream.”

“Oh grow up, already!” she snapped. “We’re
not little kids and there’s nothing dangerous out here! They didn’t
put any dangerous animals on the planet.”

“There are bees and stuff,” Devon
argued.

Krys saw Devon look down as his cheeks
flared red. He looked back at her, annoyed that she’d hurt his
friend. “We don’t know what that is! Come on, don’t be so
mean.”

Pita rolled her eyes and didn’t back down.
“I’m going to check it out!” she said.

“Hey, um, I found you,” Lily said as she
jogged up to the edge of the stream bed. “What’s going on?”

“We don’t know,” Krys told her. “But Pita’s
determined to go find out.”

“Good idea, let’s go!” she said and hopped
down to the soft gravel beside the stream’s edge.

“Guys!” a new voice shouted over the rising
and falling whistle. It came from behind them in the forest. “Hey
guys! Where are you? I saw something!”

“Over here!” Lily shouted back. “By the
stream.”

Several seconds passed before they heard
someone crashing through the ferns and underbrush. Anner showed up,
gasping, and slid over the edge of the bank when he couldn’t stop
in time. Krys caught him but they both ended up falling in the
stream.

“Get off me!” Krys howled as the water
soaked his pants and shirt. “My mom’s going to ground me for a
week!”

“Sorry, Krys,” Anner said as he splashed out
of the stream. “I was hiding behind the compost piles and—”

“I know,” Anner said with a grin. He shook
the grin off and said, “So I looked up and saw the exhaust streaks
from ships landing, like when we get supplies or people rotate?
Except there was a bunch of them! Some I could barely see—they were
too far away.”

“Were they going to some of the other
colonies?” Lily asked. “Our regular ship is like five weeks late.
Maybe the others were too?”

“Any that landed north of us?”

“Yeah, the closest ones. I waited to see
then I heard that siren go off. We’re supposed to go back to town
and take shelter.”

“From what?” Lily wondered.

Anner held up his hands. “I don’t know.”

Lily turned to see Pita standing amid the
ferns and straining to hear them. “What is it?”

“Neither do you,” she said as she yanked her
arm away.

He stared at her angry expression and said,
“Well, whoever it is isn’t going to want a bunch of kids getting in
the way!”

“Leave them,” Pita called. “And they call us
girls!”

Lily’s expression softened as she looked at
Krys. “You don’t have to. I just want to see what it is.”

Krys felt his cheeks burning up at her
attention. He shook his head. “I’m already going to get in trouble
for getting wet and dirty.”

“I’ll go with you,” Devon said with a
puffed-out chest.

“Cover for us, at least? So we don’t get in
as much trouble?” Lily asked.

“Yeah, sure,” Krys promised. He tried to
smile but he barely felt his lips twitch.

Devon splashed through the stream towards
Pita, and Anner turned to climb back up the bank. Krys stood there
staring at Lily and across the stream where the sounds of falling
timber grew louder. “Be careful, okay?”

Lily bit her lip and smiled at him. She
stepped in quick and kissed him on the lips, and then turned and
rushed away before Krys could process what she’d done. “Hey!” he
called out.

“That was a kiss, silly,” she said with a
laugh.

Lily shrugged. “Duh! What do you think it
means?”

She winked at him. “We’ll talk when we get
back. I heard our moms talking the other day and I think you and I
make the best friends out of everyone our age.”

Krys’s eyes widened and his jaw dropped. She
giggled and turned away to run after the others. He watched her
catch up and then lost them as they took off at a jog through the
ferns. He sighed and reached up to touch his lips. She’d kissed
him! And then run off into the unknown.

Krys shook his head and groaned. He wanted
to follow her but he didn’t want to get in trouble. He swore under
his breath and then glanced around, making sure no adults heard
him. If he went after her, he’d be lucky if he got grounded. More
likely his dad would volunteer him for an entire Venerian day of
compost duty!

He grimaced at the thought of more than
three Earth months spent shoveling rotting food and poop into the
recyclers. Was his first kiss worth that kind of punishment? He
grinned and turned back to the stream. Absolutely!

“What took you so long?” Pita asked once the
gasping Lily caught up to them.

“Krys was talking to me,” she mumbled.

Pita scoffed. “What do you see in him? He
worries about everything!”

“Like I’m going to be okay hiding in a
cellar while something cool is happening? Come on, let’s go!”

Devon’s head turned back and forth between
the two girls like he was watching a ball bounce. When Pita ended
the conversation with a flip of her golden mane, he turned and
offered Lily a shrug. Lily returned it and started after Pita.

They walked for over a minute until the
sound of the forest being overturned was too loud to make out
individual crashes. The ground shuddered under their feet, causing
anxious glances. Pita stopped after one particular boom matched a
vibration that traveled through the ground and knocked a dead
branch free to fall right in front of her.

“Still want to check it out?” Lily
teased.

“You bet I do!” she said. She glanced at
both of them, an excited gleam in her eye. “Come on!”

Lily laughed and ran after her, leaving
Devon scrambling to keep up. Pita’s long legs made it hard to catch
her, but not as hard as the bush that seemed to jump right out at
her and trip her. She cried out as she fell and slid into another
bush.

Devon stopped beside her and bent over,
gasping for breath. “You okay?”

Lily nodded. “Just tripped.” She twisted to
get her hands and feet under her and started to rise up when the
sound of timber creaking and breaking jerked both their heads up. A
large tree, an oak modified to handle the Venerian climate, tipped
forward and to the side and came crashing down.

“Holy crap!” Devon whispered while Lily
stared at the massive vehicle behind it.

Except it wasn’t a vehicle, or at least not
the kind powered by wheels or fans. It stood on two legs and
looked, for all intents and purposes, like a heavily armored human
being. Sure, a human being that towered over them.

“What is that thing?” Lily hissed.

“Pita! Hide!” Devon shouted at the blond who
stood in the middle of a patch of sunlight revealed by the crashing
tree.

She turned her head to look back at them,
her mouth open in shock. The ground erupted beneath and around her,
torn up by the power of the weapon the giant robot held in its
hands.

Dirt and shredded vegetation stung Lily’s
face and hands and knocked her back to the ground. Devon crashed
beside her, covering his head and crying. She lifted her head,
swiveling to see the crater where Pita had stood, and then focused
on the robot and the other elements of the advancing force behind
it.

She saw tanks and soldiers wearing bulky
armor that made them look like miniature versions of the giant
robot. A crash from her left alerted her to another of the robots
advancing to the side. She stumbled back, falling on her butt, and
put her hand down on Devon’s back.