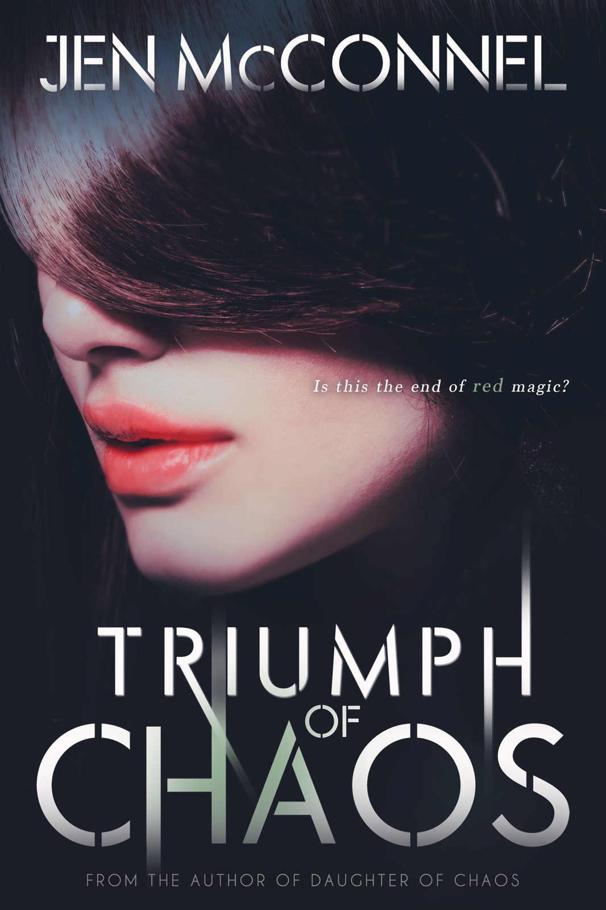 TRIUMPH OF CHAOS by Jen McConnel

To the Hollins family: you are magical!

For months, I thought I’d killed my best friend.

Now I sort of wish I had.

What kind of person does that make me?

Justin had once told me that I’d go crazy if I tried to decide who should live or die, but I kept thinking that if I’d been able to make that kind of choice in the first place, none of this would have happened. If Rochelle had really died on that rooftop last fall, then the world wouldn’t be falling apart, and I wouldn’t be to blame.

Sometimes, it sucks to be a Witch.

I used to scoff at people who preached about the end of the world, but ever since Marcus, I hadn’t been able to laugh off the sandwich-board crazies popping up everywhere. Maybe it would have been funny if I didn’t know the truth.

The world was ending. Or at least it would be if I couldn’t stop it.

Sulking, I followed my parents into our favorite breakfast place. They didn’t seem to notice the group of people standing on the corner holding signs that promised the end was nigh.

“Phew,” Mom said, pulling off her light-blue cardigan. “Summer will be here before we know it!”

A waitress bustled over, handing out menus and smiling at us. “Feels to me like summer’s already started!”

“Weather like this is exactly why people need to pay attention to global warming. I’ll have a sweet tea, and the breakfast special,” my dad added, settling back into his chair without glancing at the menu.

The waitress scribbled on a notepad. “I don’t know about all that, but eighty degrees in March is odd, even for North Carolina!”

Mom nodded, shooting a look in my direction. “We just have to stay cool and try not to think about what July will be like.”

After the waitress had taken our orders and moved on, I leaned forward. “You don’t think this heat has anything to do with … ” I gestured helplessly.

Mom shook her head. “Not something we should talk about here.”

Dad snorted, and I heard him mutter, “Not something we should talk about, period.”

My stomach clenched, and I stared at my hands, trying to pretend I hadn’t heard him. Ever since I got back from Scotland in January, my parents had kept me at arm’s length. Well, not Mom as much, but even she was more reserved than usual. My father seemed to want to pretend that I didn’t exist.

I had thought I’d only been away for a month, but the trip had actually taken over a year. I’d ended up in the Celtic Underworld, and time runs differently in Underworlds; I should have remembered that. While I’d been there, Rochelle had glamoured herself and pretended to be me. My parents
said
they believed I was who I said I was, but there was an edge to our relationship that hadn’t been there before.

It probably didn’t help that I had participated in what had become the biggest nuclear disaster in the history of the world.

Mom and Dad are both Green Witches, hippie-dippie earth-loving types, and they seemed to take it personally that their daughter had so thoughtlessly damaged the earth. To be fair, I had thought what Marcus and I did could be fixed, but that’s beside the point. My parents seemed to think the fact that I had messed with nuclear power at all was an intentional act of rebellion. It made talking to them nearly impossible, but I kept trying. Whether they liked it or not, I needed their help to fix the mess I’d made of things.

“So,” I began, forcing myself to sound cheerful, “what are you guys going to do this weekend?”

Dad muttered something about saving the world, but Mom shot him a dark look. “I might work in the garden.” She hesitated. “Did you want to help?”

Before I could answer, Dad butted in. “Lena doesn’t exactly have a green thumb.”

His words stung, but he was right—my gift seemed to be destruction, not growth. I tried to shrug it off. “I can help, if you want.”

Mom smiled, and for a moment, I could almost forget about everything that had happened, but by the time the food came, the familiar knot was back in my stomach, and I picked at my pancakes without enthusiasm. It had been hard for me to eat ever since Marcus died.

Marcus had been another Red Witch, like me. He was a little older than me and hard as granite. He’d been trained by his patron, the goddess Cerridwyn, and she had shown him how to use his magic by subjecting him to countless battles and acts of brutality. I’d never known anyone as powerful or frightening, and I had killed him.

Well, not directly. I released this crazy god of chaos, Loki, and Loki was the one who instigated Marcus’s death. But it still felt like the guilt rested solely on my shoulders: if I hadn’t listened to any of the Red gods, maybe Marcus would still be alive, and then I could figure out if I hated him or was in love with him.
Yeah, I’m not messed up at all
, I thought sourly.

I looked down, surprised. I had eaten everything in front of me, and it even looked like I’d licked the plate clean. I didn’t remember taking a single bite. “Um. Good,” I lied. “What about you?”

She shrugged. “The toast was a bit dry, but the omelet was good.”

I nodded, struggling to make small talk. Before I could think of anything else to say, someone cranked up the volume on the TV suspended over the doorway.

Shadow Memories: A Novel (The Singularity Conspiracy Book 1) by Nicholas Erik
Titanborn by Rhett C. Bruno
Every Glance (Every Life #3) by Tasha Ivey
As Hot As It Gets by Jamie Sobrato
Three Great Novels by Henry Porter
5 A Sporting Murder by Chester D. Campbell
In Bed with Mr. Wrong by Katee Robert
The Widow and the Wildcatter: A Loveswept Classic Romance by Baker, Fran
Pandaemonium by Macallan, Ben
Double Down by Katie Porter
Our partner