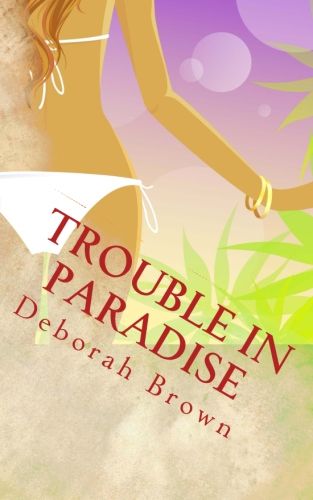 “Reading Deborah’s books are like
taking a road trip to Florida.”

“Five stars all the way.  The lady knows how to
write a mystery.”

“I love this series and author.  Interesting
characters that you’ll love and a great plot.

This book is a work of fiction.
Names, characters, places and incidents are either the product of the author’s
imagination or used fictitiously. Any resemblance to actual persons, living or
dead, or to actual events or locales is entirely coincidental.

All rights reserved, including the right to reproduce this
book or portions thereof, in any form. No part of this text may be reproduced,
transmitted, downloaded, decompiled, reverse engineered, or stored in or
introduced into any information storage and retrieval system, in any form or by
any means, whether electronic or mechanical without the express written
permission of the author. The scanning, uploading and distribution of this book
via the Internet or via any other means without the permission of the publisher
is illegal and punishable by law. Please purchase only authorized electronic editions
and do not participate in or encourage electronic piracy of copyrighted,
materials.

Excerpt from Crazy in Paradise @2011 by Deborah Brown

Excerpt from Deception in Paradise @2012 by Deborah Brown

EXCERPT FROM CRAZY IN PARADISE

EXCERPT FROM DECEPTION IN PARADISE

You know the humidity is off the charts when your scalp
tingles and itches. I adjusted my gun belt for the umpteenth time, walking
between the Lamborghinis and Ferraris in the parking lot of Brick Famosa’s
South Miami luxury car rental/sales business. The car lot stood on pricey real
estate at the intersection of two palm tree-lined avenues in The Grove.

It only took a minute to locate Brick standing in the far
corner, towering above the sports cars. I waved both arms to catch his
attention and that’s when I noticed he had his hands raised above his head,
facing a man with a gun pointed at his chest. Brick showed no sign of fear;
cool as a cucumber. He kept his eyes on his would be shooter and gave a quick
glance in my direction as I crisscrossed my way over the driveway, crouching
beside a Bentley, the perfect oversized auto for hiding behind. Sliding my
Glock out of its holster, I stood and took the shot.

The bullet hit its mark, tearing through the shoulder of the
grubby looking twenty-something. He screamed obscenities, as his cannon skidded
across the pavement. No doubt if he’d pulled the trigger, Brick’s guts would’ve
been blown all over the back fence, turning Famosa Motors into a tourist
attraction, where people would stop by on the pretext of buying a car, only to
gawk at the scene of the crime.

Brick took two steps, gave the gun a kick, and cold cocked
his assailant with his fist. “Why in the hell didn’t you kill the dumb
bastard?” he yelled at me. “You’re a better shot than that!”

“Thank you to you, too. My shot hit exactly where I aimed. I
don’t have the time for another murder investigation.”

Brick ran his hands through his jet-black hair, and used his
shirt to wipe the sweat from his face. “It would’ve been a public service.
Didn’t your instructor teach you to shoot to kill, Madison?”

“It’s not as simple as all that.” I re-holstered my gun.

Brick reached in his pocket, taking out his cell phone. He
turned his back, making it impossible for me to hear a single word, and made a
couple of calls, glancing several times over his shoulder to make sure I didn’t
disappear.

It was a sweat-soaking beautiful day in South Florida. Light
blue skies, and not a single cloud. I smiled at Brick when he put his cell
phone back in his pocket. “Instead of thank you, I’ll take an IOU.”

“You’ve told me that before.” Brick had nick-named me Red for
my shoulder-length red curly hair which was subject to the whims of humidity;
not quite Bozo curly, but on its way. “What did your admirer want?”

Sirens screamed up the street, and any second they would fly
in the driveway.

“The little bastard bragged that he planned to strip me of
my cash, steal a car, and still he was going to shoot me. What took you so damn
long? I saw you get out of your SUV and then sneak around between the cars.”

“Anyone standing in the parking lot can see whether or not
you’re in your office. I was happy to see you weren’t at your desk; totally not
in the mood for your ditzy receptionist.” Brick’s office encompassed the entire
second floor, a large open space with a panoramic view of the surrounding area
through the floor to ceiling windows.

“That’s because Bit’s boobs are ginormous and barely
covered, along with the rest of her. Gossip has it that she danced at your
newly acquired Gentleman’s Club.” Brick just purchased his latest venture
located out on a deserted stretch of the Tamiami Trail. He provided liquor,
cigars, and overly endowed, naked women, some men’s idea of a perfect evening.

“People talk too much.” Brick had his hand in many
moneymaking ventures: he had a PI business, a string of pawnshops up and down
the state and recently became a bail bondsman.

“I only saw one option, to rush the little prick, hoping to
survive the bullet. Then I saw you and hoped you’d brought back up, knowing
that you shoot people on occasion.”

I pointed. “Your friend’s coming around.” The man on the
ground let out a low moan, moving around.

Brick jerked him off the ground, throwing him face-first
against the hood of a shiny black Testarossa, bashing a big dent in his
forehead.

“Mark my words, Red, you’re going to be sorry you didn’t
kill him. He’ll drag the two of us into court because he’ll be the victim, and
this will be our fault. Then one day he’ll walk out of jail, holding a grudge,
under the illusion that time in the joint made him smarter, his time spent
plotting two murders.”

I hated that Brick might turn out to be right. “Proof that
no good deed goes unpunished; I save your life, and he comes back and kills
me.”

Two Miami police cars screeched to a halt in front of us.
Thirty seconds later a paramedic van pulled up behind them. Brick intercepted
the police before they got to me; the paramedics unloaded their stretcher and
went straight to the shooter.

Casio Famosa, Brick’s twin brother and Miami homicide
detective, made a beeline straight to me. I should’ve known Brick’s first call
would be to him. The brothers were both overly large, muscled bookends, with
the difference being Brick had lots of black hair, and Casio was cue-ball bald.

“Where’s the gun you used to shoot the punk with?” Casio
asked.

“In a holster behind my back.”

“Take it out slowly, leave one hand in front of you,” Casio
directed.

“You’re talking to me like I’m going to shoot you.” I
reached behind my back, handing him the gun. “When do I get it back?”

Casio looked me over in a tasty-morsel sort of way. I guess
my jean skirt and t-shirt passed muster. “You know how it works, when the case
is over. Why?”

“My brother gave it to me for my birthday.” Wait until Brad
heard about this incident. He approved of my taking self-defense classes, and happy
I passed the test for my concealed weapons permit. I was certain that using my
new skills weren’t part of his plan. Brad’s first question would be, “What the
hell were you doing there anyway?”

“Do you have a permit to carry?” Casio asked.

“In my wallet, in the black Tahoe over there.” My SUV was
the lone auto in visitor parking. It made me feel safe and it saved my life one
night in a game of road rage tag. I’d even used it once as a motel room, when
last minute tickets were given to me for a NASCAR race in Daytona. I wouldn’t
trade it for one of Brick’s over-priced sports cars because, even with long
legs, my feet never reach the pedals, even with the seat pushed forward.

Another dark SUV, with blacked out windows, screeched to a
halt.
Must be more law enforcement
, I thought. That level of window tint
was definitely illegal. The window rolled down, and Detective Harder sat behind
the wheel.

I must have groaned because Casio looked at me and laughed.
Harder and I had a past; he disliked me and the feeling was mutual. He got out
dressed in a nice pair of golf shorts and shirt. I blinked a couple of times,
thinking that I must be hallucinating. I’d never seen him without his uniform
on, a black suit he’d either slept in or picked up off the floor from the night
before. Who knew he could do normal? His military hairdo rumpled, tanned skin
and sunglasses propped up on his head, he headed in Brick and Casio’s
direction.

Another generic looking cop walked over to me. “Detective
Simon,” he introduced, handing me his business card. “What happened?”

I related my story in exact detail. Not one word of my usual
exaggeration, sticking to the facts.

“The shooter over there with the extensive rap sheet. He
just made the leap from assorted misdemeanors to a felony. He’ll find prison is
nothing like county jail.”

“First time I laid eyes on him, he had a gun on Brick.”

Harder had me in his sights and I dreaded his every step.
“Madison Westin, why in the hell didn’t you kill him? The dirtball will get out
and kill someone else. Reoffending is high. Criminals fantasize about
committing the perfect crime.”

“You the only detective on call?”

“Brick and I are friends.” Harder gave me his signature
smile, which made him look like a growling dog. “He called me to make sure
things went smoothly.”

Harder was difficult to read and I knew first hand that he
loved a good game of hard ass. “Are you arresting me?”

“At least you haven’t lost your sense of humor. Now go home,
and have a nice night if you can.”