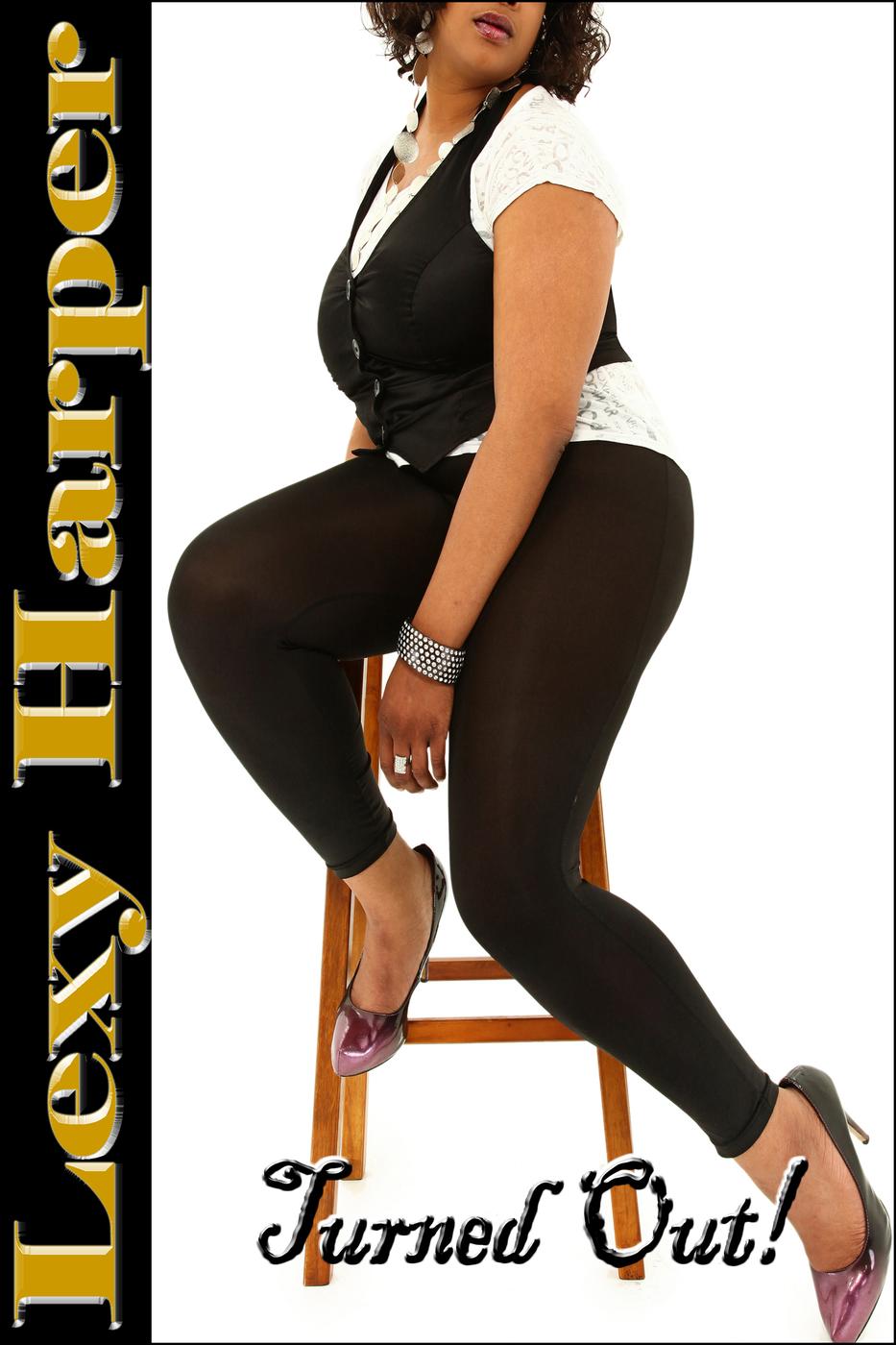 The text of this publication or any part thereof may not be reproduced or transmitted in any form or by any means, electronic or mechanical, including photocopying, recording, storage in an information retrieval system, or otherwise, without the written permission of the publisher or author, except for brief quotes used in reviews.

This book contains mature content.  Please do not continue reading if you are under the age of 18

All characters are 18 years or older, non-blood related and all sexual acts are consensual. 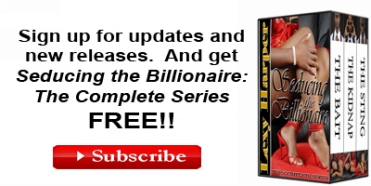 Excerpt from
Seducing the Billionaire: The Complete Series

Other titles by Lexy Harper

S
he watched as he approached her friend Marlena and bent to whisper in her ear.  Marlena must have heard him over the loud music, because she nodded her head and whispered something back to him.

He turned and walked towards the bar.

Marlena turned and rolled her eyes at Lorna.  He was cute in the way that only shorter men could be.  Lorna knew her friend well enough to know that he was
so
not Marlena’s type.

He returned with a bottle of beer in one hand and a glass, filled with clear liquid and a couple of ice cubes, in the other.  When he handed Marlena the glass, she took it and placed it next to her barely-touched one on the small table she and Lorna were sharing, without a word of thanks.

He stood next to Marlena’s chair, as if trying to build up his courage, while she glanced around the club, looking bored.  Finally he turned and asked her to dance.  She grudgingly accepted and let him lead her to the dance floor.

She danced with him as though it was an unpleasant chore, and in a way that would let anyone watching know that he wasn’t her man.

After a couple of dances, she obviously decided that she’s done enough to repay him for the drink and danced with someone else.

His embarrassment was visible as he turned to ask Lorna to dance with him.

She accepted...though ordinarily she would have refused.

He had first chosen Marlena—who was four dress sizes smaller—so he must prefer skinny women.

He’d also shown a complete lack of manners by not offering to buy her a drink too, when he’d made the offer to Marlena.  Lorna would have declined—she had enough money to buy her own drinks and also she wasn’t stupid enough to let a man buy her a drink without accompanying him to the bar—but she wondered if he was stingy or just broke.

There was an air of defeat about him that spoke to her.

He looked in desperate need of some tender loving care and she had a lot to give.

He would be her next project, she decided there and then.

Some men learn to love when they’re shown love; some take all the love they can get and give nothing in return.

She was willing to give Bryce the chance to prove which of the two kinds he was.

She was also strong enough to drop him like a hot potato, if he turned out to be the latter.

W
hen Bryce is in a good mood he calls me ‘Mr Shorty’.  When he’s pissed off he foregoes the formality and just calls me plain ‘Shorty’.  I hate the name calling.  He is only 5’ 6” and should be the last person to call anyone or anything vertically challenged.  But as they say, ‘familiarity breeds contempt’.

He and I are too close for comfort.  I would leave him if I could, but the farthest I can get my head away from him is eight and a half inches when I’m hard and a little less when I’m not.

My other end is attached to him, you see.

I’m the thing that dangles between his legs and rules him in most situations.

He has no respect for me and sometimes I have to teach him a lesson.

He and I have completely different taste in women.  He likes skinny, model types, but give me a BBW any day of the week.  When I give them some attention, they give it back a hundredfold.  They give head with gusto, the same way they eat food.  And can keep up with me because they have stamina.  Skinny women aren’t anywhere as accommodating.  Most of them hold out until Bryce buys them dinner and then they just pick at it because they are
watching
their weight.  Don’t know why—there’s nothing there to see!  Some of them have to be dined several times before they will free up and often they aren’t worth the wait.  Most big girls cook for him—some have even taken
him
out for meals.  And they almost never make a fuss about giving him some pussy.

Bryce wears two-inch inserts in his shoes to make up for his height deficit, but most women don’t realize that he is suddenly shorter once he gets them home and I get to work.

Take this evening for instance.  We walked into his favourite nightclub and he immediately walked up to this Ferrari of a woman, completely ignoring the chubby Ford Fiesta beside her.  The Ferrari grudgingly told him her name was Marlena, and after he got her a double vodka and tonic, though the one in her hand was barely touched, she grudgingly agreed to dance with him.

He and I dance with taller women all the time.  The nice ones spread their legs a bit, reducing the height discrepancy and allowing a brother to get right up in between their thighs.  She kept her legs together like her upper thighs were the only things keeping her pussy from escaping and running out of the club.  Anyway, after we danced a couple of tunes she let Bryce go, went back to her table and downed one of the drinks.  The next thing we knew, a brother almost twice Bryce’s size and height, came over and asked her to dance.  She downed the other drink, jumped up and left Bryce without a word.  She had danced with Bryce all prim and proper like she was a Sunday school teacher; she danced with the tall fucker like she was a dancehall queen.

By then all the women in the club had hooked up with other men, leaving the sweet Fiesta and an older woman the only ones without partners.  Bryce grudgingly asked the Fiesta to dance.  She readily agreed, but she was taller than she looked sitting on the stool, sipping her glass of brandy or some similar amber liquid.  Her four-inch heels made her at least two inches taller than Bryce and having unsuccessfully tried to get his arms comfortably around her, he dropped them to his side.  I could tell that he was regretting asking her to dance.  But the Fiesta, probably sensing that he would leave her in the middle of the song, wrapped her arms around his neck, spread her legs nicely apart and placed her fat clit right on top of me and started to move to the music.

By then I was as hard as granite.

Lorna, a beautiful name I thought personally when she introduced herself later, gave me the sweetest dry sex I’ve ever had.  If she had been wearing a mini or something more convenient than jeans, my man Bryce would have whipped me out and had her right on the dance floor.  I know that because he has done it before in that same club.  The lights are so low you can barely recognize faces.  A couple of times Bryce has pulled women he thought were good looking and when he got them outside under the street lights he almost ran and left them.  The club is known for two particular types of women: skinny and ugly, or chubby.  The skinny ones were always ugly, guaranteed.  The chubby ones were often pretty, but there were no guarantees.

After the party, Bryce offered her a lift home.  She had planned to share a cab home with Marlena, but the skinny Minnie went home with the big, muscle-bound fucker and left her girlfriend stranded.

On the way to her house Lorna put her hand in Bryce’s trousers and released me.  Phew!  I had been dying, confined in his boxer shorts.  She had nice, spongy hands.  Their softness felt so good against my hardness I nearly came as she stroked me.

“Do you want to come up for a while?” she asked when Bryce pulled up in front of her end-of-terrace house.

“I live with somebody,” he lied.

In other words he was telling her that he would fuck her but couldn’t offer any commitment.  This is what he does to bigger women all the time.  Yet, they are the ones who have always treated us the best.

“I’m not asking you to marry me,” she responded coolly.

“Alright, I’ll come up for a short while.”

As soon as they’d entered the door, Bryce pulled her back against him.

“Take off your heels,” he instructed, already reaching around to unzip her jeans.  She kicked off her shoes and made to turn and face him.  Instead he pulled her thong and jeans off together and kept her facing away from him.

“Do you have a condom?” she asked

“Yes,” he replied and quickly pulled one from his pocket and capped me.

Bending her over in front of him, he plunged me inside her with one stroke.

Her pussy was wet but tight.

“Aah!  Aa-ah!  Easy!” she moaned, but Bryce kept hold of her hips and kept banging away.

It’s the one thing I hate about him.  If he pulls a skinny woman, he treats her like glass—lots of foreplay and kisses and tender lovemaking.  Whenever he pulls a big woman it’s like he wants to punish her for being fat—little or no foreplay, a kiss or two only if she insists, and rough sex.

But she was tight.  I couldn’t hold out for long.  Soon I was shooting into the condom and imagining it was into her warm, dark depths.

“Are you hungry?” she asked as Bryce zipped up his flies and prepared to leave.  “I’ve got some chicken breasts marinating for tomorrow.  I can throw them under the grill or pan-fry them.  They’ll be ready in less than half an hour.”

There is nothing Bryce loved more than breast.  Women’s breasts, chicken breasts, he loved them almost equally.

“Actually, I’m a bit peckish,” he admitted and bent to take off his shoes.  He would have probably kept them on, and retained the vital two inches of height, if her carpet wasn’t a lush, thick cream or her doormat didn’t specifically say, ‘Shoes Off, Please’.

Her place was banging, almost like a man’s crib with tons of high-tech electronic equipment.  It was clear that she’d bought them for their performance and not their prettiness as most women do.  She had an eighty-five inch Samsung HD TV that Bryce knew had set back more than he earned in a year, the Bowers & Wilkins Zeppelin Loudspeaker System for iPod that he wanted badly and Xbox One.

I knew right away that Bryce was going to come back to her pad again, if only to enjoy her toys.

“I’ve got full satellite subscription, if there’s anything you want to watch,” she said, pointing to the TV.

“Thanks.”  Bryce looked around with envy.  “You’ve got a nice place here.”

Within a Man's Heart by Tom Winton
NexLord: Dark Prophecies by Philip Blood
Lethal Practice by Peter Clement
In Between the Sheets by Ian McEwan
Cyberbooks by Ben Bova
Bollywood Babes by Narinder Dhami
Marrying Miss Martha by Anna Jacobs
Susie Learns the Hard Way by Roger Quine
THE ORANGE MOON AFFAIR by AFN CLARKE
The Caller by Karin Fossum
Our partner