The Diary of Darcy J. Rhone 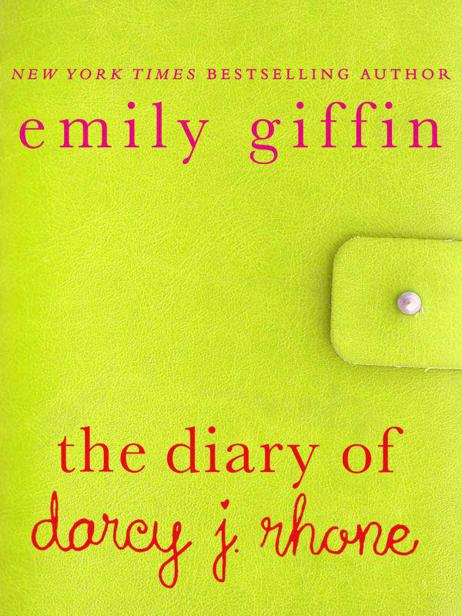 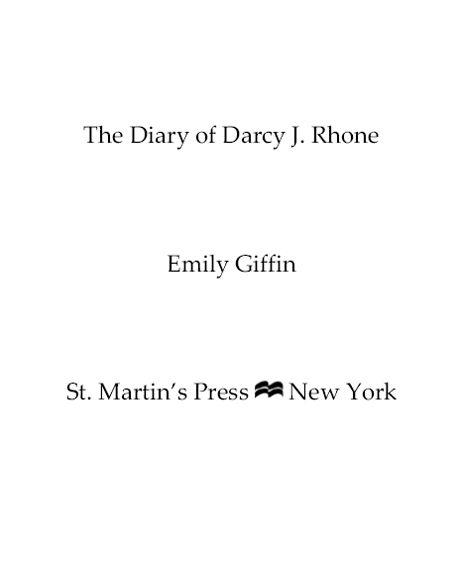 My best friend, Rachel White, gave me this journal for Christmas. What was she thinking? She knows how much I hate to write. She told me to do my best because someday I’d look back and be grateful to have all our memories recorded. She is usually right about stuff like that—my dad calls her an old soul. I’m sort of the opposite. My theory on life is OFIYOYO, which stands for “Oh fuck it, you’re only young once!” I made that up myself. Great, huh? I can be boring when I’m an adult. Right now is the time for having FUN!

So from the top! My name is Darcy Jane Rhone and I am…

D=Daring…
I went skinny-dipping at the lake last summer (with boys!).

A=Agile
…I can do a perfect center split. (Impressive word, huh?)

More about me: I am fourteen years old and a freshman at Naperville High School in Naperville, Indiana. Other than Rachel, my other best friends are Annalise (total sweetie!) and Ethan (sometimes an annoying know-it-all, but mostly funny and nice). I have one younger brother named Jeremy who is a complete dork. God, I wish I had an older HOT brother. Once I even pretended that was true by decorating our guest bedroom with Heather Locklear posters and telling the girls at my tenth birthday party that my brother was away at college. Rachel hates to lie but she backed me up like she always does.

More on my family: My dad is a dentist and he’s pretty cool as far as dads go. He is very handsome and drives a wickedly cool black BMW and loves to play golf. My mom doesn’t work except for her little personal shopper business (she basically shops for other moms who have no fashion sense—like Rachel’s mom, only she doesn’t charge Mrs. White).

Now back to me: I am a cheerleader, and a pretty damn awesome one thanks to all those years of gymnastics. (I could do a back handspring when I was nine.) I was the only freshman to make the JV squad—instead of the freshmen squad. Rachel didn’t make either, which was so, so, sooo sad. She acted like it didn’t bother her but her mom told my mom that she cried her eyes out so I try not to bring it up in front of her and I don’t blow her off for my cheerleader friends. Isn’t that nice of me? I try my best to be nice to everyone, even the geeks. The only exception is when someone is mean first—like that butt-ugly bimbette Becky Zurich, who I had to tell off for being rude to Rachel for no reason. I definitely have to protect Rachel sometimes because without me she might slip into nerd territory. People like her and she’s really interesting to talk to and stuff, but she studies too much, doesn’t wear makeup, and her clothes are a little out of style (even though I tell her she can borrow mine anytime she wants). At least I convinced her to get contacts. That was a huge improvement.

Let’s see…What else???…I’m going out with Jonathan Carlisle, but we really don’t go anywhere, except in groups, because I’m not allowed to date until I’m fifteen in September. So basically that means we write notes, talk on the phone every night, and make out between classes. (I had two detentions last semester for PDAs, but they were with him so we just made out some more in detention! Ha!) When I am allowed to date, I’m probably going to break up with Jonathan and go out with a senior with a car. I am very popular and pretty and thin. (I know this sounds like bragging but this is a historical document, and I want to be accurate for the sake of my children and grandchildren.) Jonathan thinks I look like a green-eyed Susanna Hoffs—especially in the video for “If She Knew What She Wants.” Right now my hair is even cut that way, only my bangs are bigger and better. God, I love that song—especially the line “He’d be giving it to her.” Because I like to think that Jonathan would give me anything I want. Rachel said he would. She says he’s crazy about me. I like him too, but I’m definitely not
in
love
. God, I can’t wait to be in love. To experience that thing in the movies and in songs. It’s what I want more than anything in the world. Except for maybe fame and fortune. Haha. But no, seriously, I do want to be an actress someday. Rachel says I better join the drama club if I’m so interested in acting. But I don’t think that’s necessary…. Okay, this is more writing than I’ve done in my entire life and my hand is really starting to hurt. But I’m going to write in this thing every single night if it kills me!!! 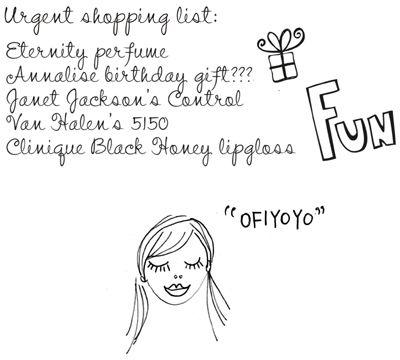 Oops. Forgot about this stupid journal until about five minutes ago when Rachel got her journal out and asked what my resolutions were. So that is my first resolution!

1) Write in my journal at least once a week (instead of once a year).

3) Let the Sun-In grow out of my hair. Why the HELL did I ignore the warning “reddish results may occur in dark brown hair”? Rachel says I should amputate the red part but I say short hair is worse than red hair.

5) Go out with Carlos Medina (a HOT exchange student from South America or Spain or somewhere like that).

More on Carlos in a minute. First I need to catch up on the whole last year. Here are some highlights (Rachel is helping because she is better at remembering my life than I am!):

1) I made varsity cheerleading. The only sophomore. Totally on track for head cheerleader, maybe even by next year.

2) I made the homecoming court (for the second time). On track for homecoming queen.

3) In July, I broke up with Jonathan to go out with Scott Slazinski, a wide receiver from Central who I met at a party. It was a little scandalous since they are our crosstown rivals, and I accidentally cheered for him at the end of a close game. Oops.

4) After football season ended, I broke up with Scott to date Jeff Doyle, a senior. His ex-girlfriend, Penny Winkelman (also a senior), and all her lame friends were so pissed. But I was like, “Get over it. I can’t help it that I’m cooler and more fun than you.” Only it turned out I am cooler and more fun than Jeff too. So I dumped him and now he’s going back out with loser-face. What can I say? Boring people belong with boring people.

5) Best movies I saw with Rachel, Annalise, and Ethan:
Broadcast News
(Ethan’s fave because he wants to be a journalist or writer),
Fatal Attraction
(remind me to never have an affair! Holy shit!), and
Dirty Dancing
(saw it four times). I’m obsessed with Patrick Swayze. Those arms! Whoever I marry better be able to lift me up over his head like that because NOBODY PUTS DARCY IN THE CORNER!

Now more on Carlos: He is seriously finer than fine. He’s a cross between Rob Lowe and Jake in
Sixteen Candles
—who is my ideal guy. He has the same dreamy brown eyes, broad shoulders, and square jaw. And he has the sexiest accent. He’s in my P.E. class so I get to see him in shorts every day, playing his native game, soccer. SCORE! (Which he does about every five minutes.) God, he is SOOOOO beautiful. He seems really sweet too. The only issue I have with him is that he’s on the short side. But if he hits a growth spurt, I would totally marry him. And even if he doesn’t, I still might. Because, you know, looks aren’t everything.

Okay. Rachel and I are going to go shower and hit the mall. I need some new Victoria’s Secret push-up bras. My A-cups are my only physical flaw. But like Carlos, I’m sure they’ll grow!

Carlos is either shy or playing hard to get and it’s really getting frustrating. He barely gives me the time of day even though I put on lots of makeup right before P.E. and wear my push-up bras. Also, I’m very tan from four sessions at Tahitian Tan (my mom bought me a ten-pack). Rachel mentioned how dark my legs were in the gym. Carlos was standing pretty close to us so I said as loud as I could, “I know. I practically look Hispanic, don’t I?” And then looked right at him. Nothing. Maybe he didn’t hear me. Maybe he was offended. Oh. My. God. Maybe he’s gay??? That would suck. Then again, I bet I could convert him.

I’m not the most patient person in the world. So guess what I did today? I marched right up to Carlos, who was getting his books out of his locker, and said, “I’m tired of waiting.” He smiled and goes, “Pardon?” in that to-die-for accent. (I made a mental note to start saying “pardon?” instead of “what?”) So anyway, I go, “I’m tired of waiting for you to ask me out.” He laughed the sexiest laugh (I don’t know how a laugh can sound foreign, but his did) and said, “Okay. Will you go out with me?” I smiled back at him and said, “I’ll have to think about it. Call me later and I’ll give you my answer.” Then I wrote my phone number on his palm and turned right around and walked to my locker with my best runway sashay, lots of hip movement, easy to do in my new, three-inch Nine West sandals. Rachel said he watched me the whole way. But I didn’t need her to tell me that. Because I always know when a guy is watching me. Call it a sixth sense. I think I have him in my clutches now. God, I hope I lose my virginity to him. How cool would that be? To have sex with a passionate foreigner with an accent?! It’s sooo much more romantic than doing it with some goober from Indiana who you’ve known since kindergarten.

Carlos called me and asked me out again. Officially. This time I said YES!! Then we talked for almost two hours. It was the BEST conversation I’ve ever had with a guy. He told me all about Spain and how beautiful it is, especially his hometown Barcelona (his mom works at the Picasso Museum! How clutch is that?). I feel so chic and sophisticated and Euro. So anyway, we’re going to Ogden 6 and Connie’s on Friday—which was my suggestion. I broke my rule about guys having to make the plans because he’s not from here. I also broke my rule about the guy must drive because it’s not really fair to expect an exchange student to have a car. And his host family, the Parkers, have an old Buick station wagon and a Ford Taurus. Yuck. So I asked my Dad if Carlos could drive his BMW. He looked at me like I was insane (my dad loves that car as much as loves me and more than he loves my brother and mom). I told him it was for a cultural good cause—that I wanted to show an exchange student the best of America. He said BMWs are German. I begged and begged until he gave in. I wonder how long he’d ground me if he knew what I’m planning to do in the backseat of his Beamer!