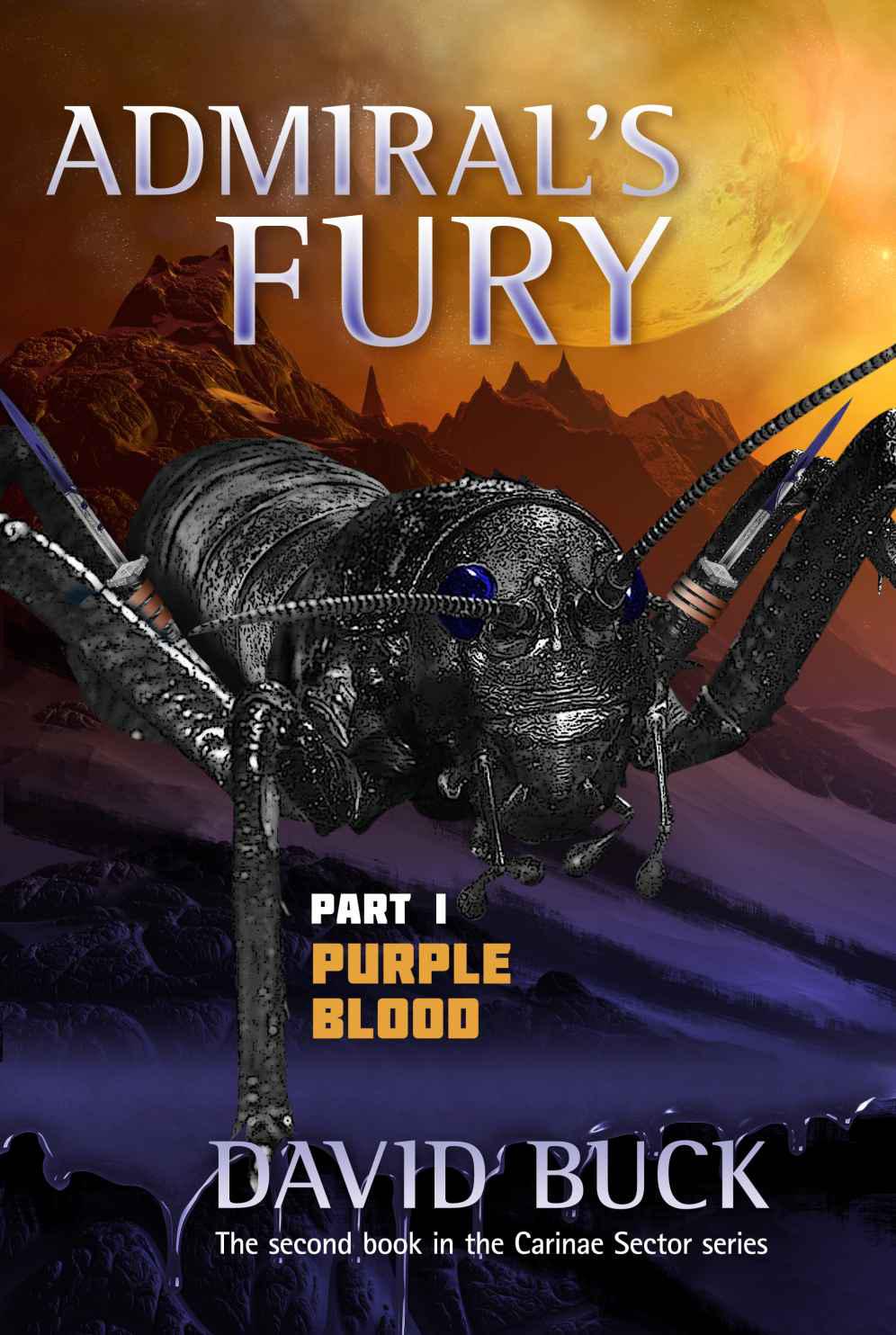 The author assumes copyright and all rights relating to this publication. All characters depicted are fictional and the story line is a work of fiction.

The novel is written in Commonwealth English.

This novel is dedicated to my father Robert Buck.

‘Be humble, for you are made of Earth.

Be noble, for you are made of stars.’

Book one; Trader’s Scourge is available in three parts:

The races of the Carinae sector

Cephrit, (the un-named) senior vassal race of warriors and administrators

Fenshilla, independent race often at war and distrusted by other races

Jerecab, a junior vassal race that is divided into two factions

Kariqua, ‘ancients’ a silicon based species hidden in Earth’s oceans

Maveen, an independent mechanical race once vassals of the ancients

Sspol, hydrogen based life form with a hidden colony Neptune

Vorinne, the most senior vassal race

The races of the Crux sector

Dradfer, A senior vassal race of researchers and administrators

Narra, overlords of the Crux sector

The races of the Cygnus sector

Other vassal races and independent races

The races of the Omicron sector

Kulvar, or ‘slavers’, overlords of the Omicron sector

Other vassal races and slave races

Maveen Dradfer probe, formerly trapped on Earth with the ancients

Altarebe, an ancient male hiding in deep space with his father

2022. Joint commercial base built on the moon.

2072. The moon is permanently settled.

In towards the centre of the galaxy in a clearing on a lush and verdant planet, the matriarch quietly considers her plans further. The Deltas Vass female trills for an attendant male to bring her a drink as she further studies the new reports, both clandestine and legal, about the strange new planet called Earth.

At a Cephrit star-base, the Fleet master views the endless reports on the war with little interest. The Cephrit ponders the universe as he considers the fate of the Traders in general, and specifically what happened to Narindestat his Trader protégé.

In the depths of an Earth ocean the eternally patient Maveen probe three silently continues to patrol around massive dormant shapes.

Elsewhere in the solar system, an atmospheric probe races high into the upper atmosphere of Neptune. The automated probe sends a short tight beam burst of data back down to a colony platform suspended under massive airbags, before it returns to the planet’s lower atmosphere and is recovered by a waiting airship the size of an aircraft carrier.

After verifying they were both cloaked, Maveen probe three cautiously led Seliandre forward towards the buried human undersea cable he had earlier scanned for possible threats. The probe paused and then moved slowly forward, and Seliandre came alongside, and they both stopped again several metres from the buried cable.

Seliandre carefully placed the jury-rigged container down on the sediment and backed away, as probe three then directed pulses of water to uncover the cable. The ancient commented unnecessarily to probe three via a low powered acoustic signal, as she kept well clear of the clouds of sediment.

‘Careful now probe three, we cannot risk either damage to the cable or any interest from the humans.’

After ten minutes, the side of the large cable slowly came into view and Seliandre moved forward to lower the container with her manipulators. The spy box was now positioned alongside the fibre cable running off into the depths. The ancient watched with quiet approval as probe three then reached over and connected a cluster of smart sensors from the spy box to a thickened part of the undersea cable. In moments, the hair thin sensors had burrowed into the cable and established a sealed physical connection with the join inside the cable.

Seliandre plugged herself into a local port on the spy box, and settled on the sediment nearby to both run a series of tests and see if she could understand the information she now looking through. The Maveen probe edged around to the fibre cable sitting on the sediment and slowly began burying the cable as it moved back into the depths.

After two hours the probe three returned from burying the cable and reported to Seliandre.

‘Your sisters have verified the cable is functional, and as per your requests they are only monitoring the connection. Queen Angwene asks that you return to the safety of the suppression field at the earliest opportunity.’

Seliandre unplugged herself from the spy box and slowly backed away from the undersea cable. As she assisted the Maveen probe in burying the spy box and the cable in carefully jetted water blasts, she reported on what she had already discovered.

‘The circuit information was easy and the spy box passively broke the human base protocols and encryption in five minutes. The language information of the Traders and Barus is entirely accurate and I can already understand the news broadcasts in several languages.’

Probe three turned his patrol boat sized hull towards the depths, and now listened patiently as the larger ancient continued to report as she followed him back to the depths.

‘The humans still use the internet to email and talk to one another. Their major research organisations and universities have their own locations and some operate as consortiums across the internet. Their conservation efforts after fifty years show real promise and I have already located maps of the ocean conservation zones.’

The Maveen probe gave a cautious reply as he evaluated the ancient’s report.

‘So if we can later indirectly influence the ocean conservation zones then we can increase our chances of remaining undetected in these oceans.’

By unspoken agreement, both of them remained silent during the long return journey to their hidden underwater facility. They were both well aware of the risks associated with being discovered by the humans, for they knew that either the Vorinne or the Zronte themselves would quickly intervene once they discovered the presence of the ancients in Earth’s oceans. The irony of the situation was not lost on the Maveen probe, for the haven status of Earth had protected the queen and her daughters for thousands of years.