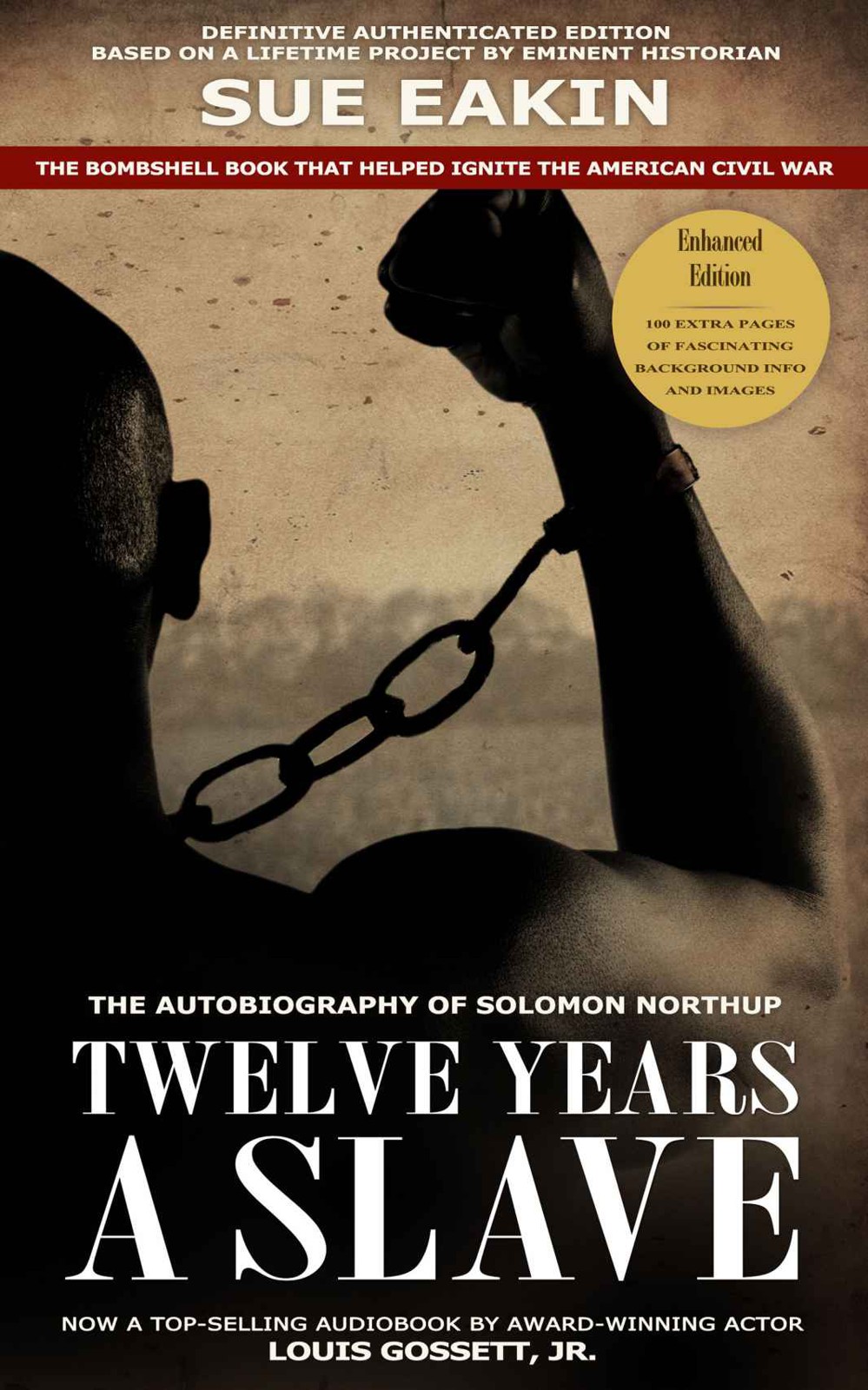 Praise for Twelve Years A Slave

“I can never read his account of his days in slavery, of his independence of spirit, of his determination to be free… without believing that it would make a difference in today’s world if our contemporaries knew of such a man as Solomon Northup.”

From letter written to his friend and fellow historian Dr. Sue Eakin. Dr. Franklin was Professor Emeritus of History at Duke University, best selling author, past president of American Historical Association and recipient of Presidential Medal of Freedom, the nation’s highest civilian honor.

“It’s a textured portrait that refuses to deal with the issue in absolutes. The author is articulate and proud, and Louis Gossett, Jr., carries this tone throughout his reading. Northrup writes in a straightforward style, letting facts and details speak more eloquently than emotion. Again, Gossett captures this feeling. But when the author does get emotional, Gossett infuses the words with a quiet, seething power.”

Review of our audiobook performed by award-winning actor Louis Gossett, Jr., published by the premier source of reviews in the audiobook industry.

“Its truth is far greater than fiction. Think of it. For thirty years a man, with all a man’s hopes, fears and aspirations… Then for twelve years a thing, a chattel personal, classed with mules and horses… It chills the blood…”

Twelve Years a Slave
was lost to history by the early twentieth century when it could not be located by libraries, stores or catalogues nationwide. Then a 12-year-old avid reader in central Louisiana—the future Dr. Sue Eakin—reached upon the library shelf of a planation home and discovered a dusty copy of the book that would determine her life’s path.

Dr. Eakin went on to write her master’s thesis about Solomon Northup’s story, and after decades of research, produced the first authenticated edition of the book in 1968. In 2007, at the age of 88, she completed her final definitive edition with over 100 pages of fascinating new information, never-before-published images and unique maps related to the story; this e-book is the first mass publication of her final edition.

Along the way, Dr. Eakin authored over a dozen acclaimed history books and became an award-winning history professor, Hall of Fame journalist, local civil rights leader and internationally recognized authority on antebellum plantation life. Dr. Eakin’s academic career spanned over two decades with intensive historical research supported by grants from the National Endowment for the Humanities, the American Association of University Women, the LSU Foundation and others. She founded and directed the World Plantation Conferences featuring prominent scholars from around the world, served on the boards of many historical foundations, and delivered hundreds of speeches around the country regarding her research and unique perspectives. A popular classroom teacher, her travel courses in Louisiana, Southern and American history developed a large following, and she was recognized as Distinguished Faculty of the LSU System and national Outstanding American History Professor by the Daughters of the American Revolution.

After her passing at age 90 in 2009, her priceless archive was donated by her family to Louisiana State University Alexandria. The Smithsonian Institute is creating a permanent exhibit featuring a portion of her
Twelve Years a Slave
research materials, and her family carries on her work and spirit with its passionate preservation of Solomon’s story and support of civil rights.

The tragic story of Solomon Northup told in
Twelve Years a Slave
stands as an enduring classic in American history. This new edition of the book shows to a fuller extent the tragedy, adding some understanding of the limits to freedom and justice endured by a free man of color in antebellum society.

The tension between North and South forms the background of Solomon Northup’s story, which provides unique insights into the escalating conflict over slavery, as the country moved closer to civil war with every passing year. The beginning of the story sheds light on the unpublicized criminal ring that kidnapped people of dark complexion and sold them into slavery in the nation’s capital. So cleverly planned were their operations that the criminals were almost never brought to justice, as they shielded themselves with the help of powerful political connections, gained high-level positions in law enforcement and manipulated the rules of the judicial system. Masterminding this Reverse Underground Railroad was James Birch in Washington, D.C., who described his position in subsequent legal documents:

I was appointed by the Mayor of Washington D.C. to the Command of the Auxillary Guard Department in June, 1853, which said guard is part of the Police force of the city and District aforesaid and which office I still hold . . .
1

When Birch and notorious New Orleans slave trader Theophilus Freeman began as partners as early as 1840, Birch had been in this business for more than a decade.
2
During this time of sharpened feelings between the North and South, further fueled by the Compromise of 1850 and its Fugitive Slave Act, the fiction of Harriet Beecher Stowe’s
Uncle Tom’s Cabin
, published in 1852, further inflamed the masses for the abolitionist cause.

Uncle Tom’s Cabin
, though fiction, had such a great impact that it inspired President Lincoln’s apochryphal line: “So you are the little woman who wrote the book that started this great war!”

Harriet Beecher Stowe’s book sold 10,000 copies within the first week of publication and 300,000 by the end of the first year. There were over a million copies sold in England. Stowe’s $10,000 royalty from the first three months of sales was “the largest sum of money ever received by any author, either American or European, from the sale of a single work in so short a time.”
3

Given the record set by Stowe’s novel, David Wilson, Solomon Northup’s ghost writer of
Twelve Years a Slave
, must have been excited when attorney Henry Northup, along with Solomon, presented him with the proposition to write a book that conceivably could bring fantastic rewards. Wilson had all of the ingredients for a highly successful book. Imagine what could be done with a story built on the factual kidnapping of a free man of color from New York who was shackled in a slave pen in the nation’s capital and sold into slavery in New Orleans!

The clincher of the public attraction of Solomon’s story was that the Louisiana’s Bayou Boeuf area, where he actually served twelve years as Platt the slave, was coincidentally only sixty miles from Stowe’s fictional plantation of Simon Legree. Also, the people described by Solomon bore a close resemblance to Stowe’s cast of fictional characters.

In 1853, Solomon’s autobiography brought immediate reaction from New York newspapers, and his first-hand account was perceived as validation of Stowe’s portrayal of Southern slavery.
Twelve Years A Slave
was published less than a year after Stowe’s spectacularly successful fiction. About 8,000 copies were sold in the first month, and several subsequent editions appeared until it finally went out of print in 1856. The book remained out of print until I completed the first modern edition in 1968 following decades of research.
4

Documenting this edition has been the culmination of a lifetime’s work. It also represents endless hours of time and tens of thousands of dollars spent in pursuit of the necessary documents to confirm or refute elements of the story. End notes in this edition are expansive and provide the fascinating back story and intrigues of plantation society in the Bayou Boeuf area.

My discovery of Solomon Northup’s story began accidentally over seven decades ago when I was twelve years old. On a hot summer day, Mama, my younger siblings, and I were returning to our home on Bayou Boeuf from a ride with Dad, who was driving a long flatbed truck. When we arrived Dad stopped the truck and Mama got out with the younger children to walk down the lane to our home. Dad was driving farther south some miles away to discuss business with Sam Haas, whose family owned a large plantation. As she stepped from the cab with the younger children, Mama asked, “Why don’t you take Sue along with you?” That was how I found myself beside Dad in the cab happily riding to Oak Hall Plantation. Once there, the men were momentarily concerned about what I was to do while they talked. Mr. Haas invited me in with plans to give me a book to read while they tended to their business.

O Glory be! Mr. Haas reached up on the bookshelves in the family library and handed me the rare copy of the original edition of Solomon Northup’s
Twelve Years A Slave
. The first thing I spied in the flyleaf of the old book was an inscription in the careful handwriting of his father, Dr. W. D. Haas (1868-1940). I began reading the book as rapidly as I could, becoming more and more excited with every passing moment. I recognized place names in Cheneyville, a short distance from our home where our mail was delivered “rural free”; Lecompte, where I attended school; and Bayou Boeuf (English pronunciation: “bef;” French, “buff”)—all of which delighted me. The names of families well known in the area—the Tanner families, the Fords, the McCoys, and others—kept me making mental notes to inquire later from these people about the Northup story. Never before had I seen a book written by an author actually familiar with our remote plantation country.

I read as fast as I could, but I could not finish it before the men had completed their business and Dad was ready to go home. This meant giving up the book, and the disappointment must have shown in my face. Mrs. Haas, mother of Sam Haas, asked me if I wanted to come back to spend the day with her so I could read the book all day long. I did, and I became involved with
Twelve Years A Slave
from that day forward.

I searched for years for a copy of the old book for my own, but one was nowhere to be found. Then, when I entered Louisiana State University in 1936, I searched at Otto Claitor’s Bookstore, with its storehouse of old books spilling out of his gallery. Suddenly I spied
Twelve Years a Slave
and asked the price with trepidation. “What do you want that for?” asked Mr. Claitor, known as an authority on rare old books. “There ain’t nothing to that old book. Pure fiction. You can have it for 25 cents.” And that began my life with Solomon Northup.

A Silent Fury by Lynette Eason
Hearths of Fire by Kennedy Layne
1985 by Anthony Burgess
Programmed To Protect (The Tau Cetus Chronicles) by Jenna Ives
Though None Go with Me by Jerry B. Jenkins
A Class Apart by Susan Lewis
WindBeliever by Charlotte Boyett-Compo
Valleys of Death by Bill Richardson
White Chocolate by Victoria, Emily
Jasmine and Fire by Salma Abdelnour
Our partner