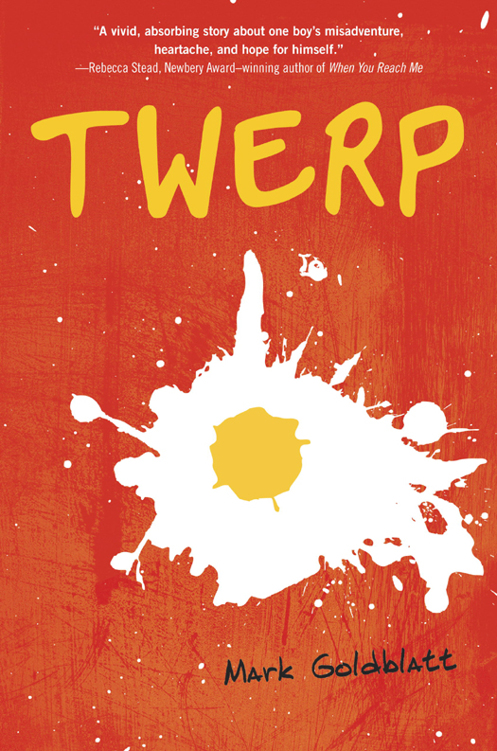 Visit us on the Web!
randomhouse.com/kids

The Pigeons of Ponzini
Me and Shakespeare
Racing with Cars
Quentin’s Eyebrows
Messing with Mr. Caricone
The Love Letter
Eduardo
Mrs. Fine
Amelia’s Room
Waiting for the Bus
Sábado
Taking a Break
Ouch!
The Truth Comes Out
Buddying Up with Beverly Segal
Betrayals
When They Get Started …
The Rabbi’s Advice
The Punch Line
Date Night
Track and Field Day
It’s Not Fair …
Dragging the Couch

The Pigeons of Ponzini

My English teacher, Mr. Selkirk, says
I have to write something, and it has to be long, on account of the thing that happened over winter recess—which, in my opinion, doesn’t amount to much. It’s not like I meant for Danley to get hurt, and I don’t think that what happened was one hundred percent my fault, or even a lot my fault, even though I don’t deny that I was there. So I guess I deserved to get suspended like the rest of them. I mean, maybe I could’ve stopped it.
Maybe
. But now the suspension is over, and Selkirk says I’ve got to write something, and because he says so, my dad says so, and that’s that. I know what’s going on. Selkirk thinks that if I write about what happened, I’ll understand what
happened. Which makes no sense, if you stop and think about it, because if I don’t understand what happened, how can I write about it?

Besides, I’ve done worse,
much
worse, and never written a word about it, and the fact that I never wrote about it had no effect, good or bad, so writing about it or not writing about it isn’t going to prove a thing. I’ve got a good handle on who I am, if I say so myself. Compared with most twelve-year-olds, I mean. I’m not saying that I’m done growing up. I know I’ve got a long way to go. Sixth grade isn’t the end of the line. My dad says that when he looks back to when he was a kid, he doesn’t know whether to laugh or cry. I know there’s going to be a Julian Twerski in the future who’s going to look back the same way and maybe shake his head. (That last sentence should make you happy, Mr. Selkirk.) But when I look back
right now
, I’m just saying that what happened with Danley Dimmel isn’t the worst thing I’ve done.

I’ll give you a perfect example: Last year, Lonnie and I were out back in Ponzini doing nothing, just yakking it up. Now, I guess I should mention that Lonnie’s my best friend. Except calling him my best friend doesn’t tell how tight we are. My dad says that if Lonnie told me to jump, I’d ask, “How high?” He’s being sarcastic, my dad, but he’s right in a way. Because here’s the thing: Lonnie wouldn’t tell me to jump unless he had a good reason. So, yeah, I’d
ask, “How high?” He’d ask me “How high?” too if I told him to jump. It doesn’t mean a thing. I’ve known Lonnie since I was two and he was three, and some of the stuff that’s gone on between the two of us he’d brain me if I ever wrote about, but I’m sure he’ll be all right with me writing about the thing with the bird.

Oh, and I should also mention that Ponzini is what we call the lot behind the old apartment building on Parsons Boulevard where Victor Ponzini lives. Why we started calling it Ponzini is another story, and it doesn’t matter for the bird story. So let’s just say that Lonnie was the first to call it that, and it caught on with the rest of us. But it fits. It looks like a Ponzini kind of place.

If you want to picture it, picture a layer of brown dirt on a layer of gray cement about the size of a basketball court. It’s got weeds growing out of it, and it’s got broken glass around the edges, and it’s got a half-dozen rusted-out wrecks that were once parked in the underground garage but got pushed out back when their owners skipped town. It’s got rats, which should go without saying, but the rats only come out at night. In other words, it’s foul and useless, kind of like Victor Ponzini, who once squealed on Lonnie for cutting class. I mean, why is that Ponzini’s business? The guy’s a fifth grader and nothing but a tub of lard, but at least he knows it, which is about the only thing he’s got going for himself.

So Lonnie and I were hanging out at the far end of Ponzini, just shooting the breeze, when I noticed that about a dozen pigeons had landed between two of the rusted-out wrecks. I nodded at the birds, and Lonnie glanced behind him, and I said, “What do you make of that?”

But in the time it took for the words to come out of my mouth, another half-dozen pigeons swooped down and landed. It was crazy—like a scene from that Alfred Hitchcock movie where a million birds get together and attack a town for no reason. There was no reason for them to show up in Ponzini either. There’s not a thing for them to eat. I mean, it might make sense if someone had scattered bread crumbs for them. But there was nothing. It was as if one pigeon took it into its head that the far end of Ponzini would be a good place to rest for a minute, and then the entire air force joined in.

So the two of us were standing there watching, and in about a minute there were hundreds of pigeons crammed together between the two rusted-out wrecks, and the air was full of
prrriiiilllrrrps
—you know, that sound pigeons make. Their heads were bobbing up and down, ducking back and forth, and they were checking each other out. It was like a bird carnival. I’d never seen a thing like it.

That’s when Lonnie turned to me and said, “Chuck a rock.”

I just stared at him. It made no sense. “What do you mean?”

“Why would I chuck a rock?”

He gave a slight laugh. “C’mon, Julian, chuck a rock.”

“I’m not chucking a rock.
You
chuck a rock.”

“Plus, even if you do, they’re
pigeons
. They’re filthy.”

“You just want to see them take off at once.”

“There’s
no way
you’re going to hit one of ’em,” Lonnie said. “It’s like survival of the fittest. Use your brain, Julian. Do you think a pigeon makes it even one week in this neighborhood if he can’t dodge a rock?”

I bent down and picked up a rock. It was gray with streaks of black running through it, maybe the size of a Reese’s Cup, except kind of jagged and much heavier. The weight of it in my hand gave me second thoughts. I knew that if the rock hit one of the birds, it was going to hurt it bad. But then I thought that Lonnie was likely right, that the pigeons would see the rock coming and they’d all take off at once, and it would be something to see.

So I did it. I chucked the rock.

I knew it was a dumb thing to do, but I did it—which, now that I think about it, kind of makes my dad’s point about Lonnie telling me to jump. Except it had gotten to
where I
wanted
to chuck the rock, even though I knew it was dumb, because I wanted to see what would happen. Just to make sure, though, I screamed, “Heads up, birds!” real loud a second before I chucked it, and then I chucked it as high as I could, and that rock was no sooner in the air than the sky was full of birds, wave after wave of them, taking off before the rock even got to its highest point. There were so many of them in the air that it was hard to follow the upward flight of the rock because it was just another gray-and-black thing.

But you could follow it on the way down.

It was the only thing going in that direction, and that was when I realized that lots of birds were still going to be on the ground when it hit. They were crammed together too tight. There was no more room in the air for the stragglers to take off and no space on the ground for them to get out of the way.

It was maybe a second between the time I realized that and the time the rock hit, but that was one
long
second. My mind was racing forward, and I was grabbing at the air, clenching and unclenching my right hand, as if that would bring the rock back, as if I could undo how dumb I was for chucking it in the first place. Meanwhile, I was still hoping—no, I was
praying
!—that the rock would just clack down on the ground and nothing would happen.

But then the rock hit, and the sound wasn’t a
clack
but a soft
oof
, and I knew, from the sound, I’d hit a bird. I couldn’t tell which one for another couple of seconds. That was how long it took for the rest of the birds to scatter and take off, and then there was only one left on the ground, flapping its wings like crazy but just going around in circles and raising a cloud of dust.

When the Lights Come on Again by Maggie Craig
You Can Run by Norah McClintock
Seventh Son: The Tales of Alvin Maker, Volume I by Orson Scott Card
The Do's and Don'ts of Entering a Relationship by Robinson, Stephen
Beach Side Beds and Sandy Paths by Becca Ann, Tessa Marie
Dead Center (The Rookie Club Book 1) by Danielle Girard
Away from Home by Rona Jaffe
Tortured Soul by Kirsty Dallas, Ami Johnson
After the Kiss by Terra Elan McVoy
Ghostly Realm - Not Even Death Could Separate Them by Kelley, Cindy J.
Our partner