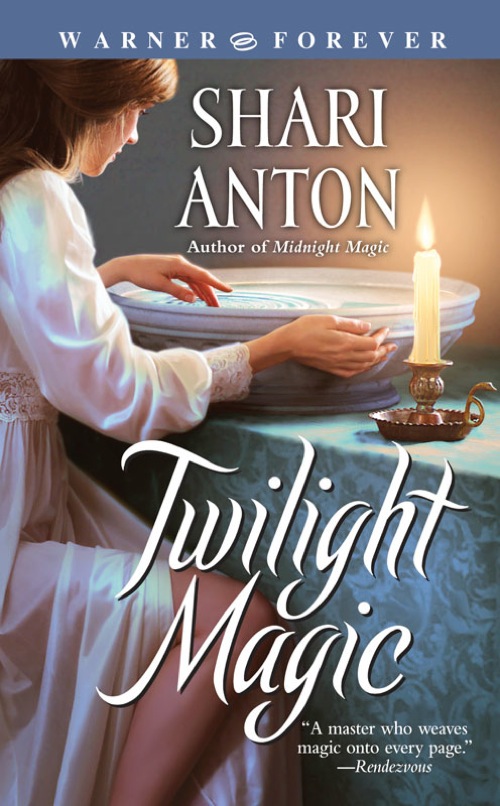 Excerpt from
Sunset Magic
copyright © 2006 by Sharon Antoniewicz All rights reserved. No part of this book may be reproduced in any form or by any electronic or mechanical means, including information storage and retrieval systems, without permission in writing from the publisher, except by a reviewer who may quote brief passages in a review.

Visit our Web site at
www.HachetteBookGroup.com.

“Be ready to leave at first light on the morn.”

Slowly, she opened her hands, letting go of his tunic, but unable to remove her hands from his chest. She could feel his heat, and the steady, solid beat of his heart.

“My thanks, Darian,” she whispered, looking into his hazel eyes.

His anger, humor, and resignation had fled, replaced by a desire so intense that her woman’s places flamed in response. Heaven help her, becoming this man’s lover would be no hardship at all.

No matter that he tried her patience, could infuriate her in a heartbeat. No matter that he kept his emotions tightly controlled, gave naught of himself to anyone, not even a hound who adored him.

Heaven help her, if he smiled at her as he had in her vision, demanded a tumble right now in the upstairs bed-chamber or a stable’s stall, she would relent. . . .

PRAISE FOR
SHARI ANTON
AND HER NOVELS

“Just the right amount of passion, mysticism, and mythology.”

“A fine historical tale that readers will appreciate.”

“Sexy... touching and magical medieval romance... should please readers of both historical and paranormal romance.”

“Anton captures not only the spirit of the Middle Ages, but the heart of her characters as well.”

“Anton handles history with a deft hand, even as she spins a tale that will capture the reader’s heart.”

“Magnificent... Filled with wonderful characters and plenty of sexual tension.”

“Ms. Anton creates a strong, sexy hero who holds your attention until the end.”

“Bravo . . . Ms. Anton has painted a marvelous and witty novel of love.”

“A keeper! This is a delightfully charming novel, extremely well written, with characters who blossom throughout each page.”

“A historical romance for readers to savor.”

“A lovely, lovely tale... The well-proportioned mix of narrative and dialogue; passion and romance; challenge and triumph sets a brisk pace. . . . I’m eagerly looking forward to her next book.”

A
LSO BY
S
HARI
A
NTON

To Mark & Susan Hyzer
who know the full meaning of
for better or for worse.
And are enduring.

N
ot this morn, Lady Emma. The king has matters of great import to discuss with his counselors, so he will be occupied for the greater part of the day.”

Lady Emma de Leon’s nails dug into her palms in an effort to control her rising frustration. Shouting at the chamberlain’s clerk would do her no good.

Yesterday, another of the chamberlain’s clerks had refused her request for an audience with the king, and she’d heard similar excuses on other occasions throughout the past summer. With King Stephen so rarely in residence at Westminster Palace, her opportunities to speak to him had been few and she was determined to gain an audience before he left again.

“On the morrow, perhaps?” Emma asked of the pale little man with the graceful hands and uptilted nose.

He huffed. “A war is being fought, my lady. Events will dictate who will be allowed into the royal presence based on urgent need.”

Emma understood all about the damn war. If not for the war’s ghastly assault on her family, she wouldn’t be forced to plea for royal intervention on her youngest sister’s behalf.

In as calm a voice as she could manage, she explained, “A child’s fate depends upon a royal decision, and I require only a few moments to make my request. Surely the king can spare a moment for an act of mercy.”

“If I yielded to everyone who requested a moment of the king’s time, His Majesty would be an old man when all were done.”

Emma again tamped down her ire, striving mightily not to strangle the guardian of the royal chamber’s door. “I realize the king’s time is precious, and if any other person could act on my request, I would not bother him. But no other than King Stephen can make decisions over his ward’s fate.”

“Is the child in grave danger?”

Damn. The clerk’s smug smile said she should have lied and told him she feared Nicole in physical danger. But Nicole hadn’t complained of beatings or whippings. Instead, the letters stank of amiability and contentment, reeked of resignation.

No plea for deliverance. No entreaty for liberation. If not for the handwriting, Emma would think someone other than Nicole wrote the letters. The girl was either changing or despairing and Emma knew she must procure the girl’s release from Bledloe Abbey before the nunnery sucked all the vibrancy and joy of life out of Nicole.

For four months Emma had tried to keep her oath to Nicole, and four months now seemed far too long to be prevented from keeping that oath.

The clerk waved an irritatingly dismissive hand. “Then the matter is not urgent and does not require the king’s immediate attention. Indeed, I suggest you put your request to parchment for the king to consider at his leisure.”

“I did, in late summer, but have received no answer. I can only assume my request has been... misplaced.”

Lost on purpose, no doubt. Shoved aside by the chamberlain’s clerks as unimportant. Her deceased father, Sir Hugh de Leon, was considered a traitor, and no one at court felt any obligation to show kindness or mercy to the traitor’s daughter.

The clerk’s eyes narrowed. “Naught which is overseen by the chamberlain’s clerks becomes misplaced. You must have patience, my lady. The king will consider your petition in due time.”

With that, he strode down the hallway toward the royal residence, to a doorway leading to the king’s chambers, which she could see but wasn’t allowed to pass through, leaving her standing alone and with no recourse. Naturally, the guard opened one of the huge oak doors and the clerk swept through without a challenge.

The clerk belonged; she did not.

Tempted to rush the door and force her way in, knowing she might hurt her cause further by such boldness, Emma fled in the opposite direction.

All the way back to the queen’s solar, where Emma spent most of her days and nights, she fought the urge to scream and make
someone
listen to her. No one would, however. Not even if she wailed her outrage.

Since her arrival in London, she’d been shunned, considered the undesirable outcast. Emma had known from the moment she’d been informed she was coming to court that she wouldn’t be a favorite. However, she had not expected to be treated with malicious contempt—as now, when entering Queen Matilda’s sumptuously furnished solar.

Several elegantly garbed women who served as the queen’s handmaidens looked up from their embroidery, or loom, or book, to see who had entered. All immediately turned away when they saw who came through the door.

No one of importance,
their expressions said.
Only the traitor’s daughter,
their malevolence shouted.

Intent on ignoring the hurtful dismissal, Emma plopped down on a bench at the far end of the chamber, near the open window slit through which she heard rain splatter against the palace’s thick stone walls. A deep breath helped calm her upset and sort her thoughts, trying not to blame her father or her new brother-by-marriage for placing her in an untenable situation.

On the day of her father’s death, King Stephen had knighted Alberic of Chester and gifted him with her father’s barony. Then the king had ordered Alberic to marry one of the three de Leon daughters, send another to court, and give the last to the Church.

Alberic’s decision on which daughter to marry hadn’t surprised Emma. Her younger sister Gwendolyn was by far prettier and more likeable than she was. Nicole, besides being too young for Alberic’s taste, had tried to stab him with a dagger. Still, Alberic would allow the girl to return to Camelen, which only proved her brother-by-marriage possessed a generous heart.

Emma had promised Nicole she would petition the king to allow the girl to leave the nunnery and return home. Of late, Emma had considered adding a plea for deliverance of her own, but admitted she didn’t particularly want to go home to Camelen. To be dependent upon her slightly younger sister and her brother-by-marriage didn’t appeal.

Sweet mercy, she’d been excited when Alberic informed her she was being sent to King Stephen’s court at Westminster Palace, and had arrived with hopes of finding a place for herself. Instead, she’d found only misery. ’Struth, she didn’t particularly wish to remain at court any more than she wanted to return to Camelen.

For now, however, she must put her own discontent aside and concentrate on freeing Nicole. With her little sister’s future settled, Emma could then worry about her own fate.

Not that she had any control over her fate, for that, too, rested in the king’s hands. A king whose time was limited and guarded by wretched, uncaring clerks.

People gathering at the doorway signaled the return of Queen Matilda from her daily walk in the garden, accompanied by the flock of men and women who comprised the cream of the queen’s court. Everyone in the solar stood, giving the queen the honor due her royal rank. Not until she crossed the room to her ornately carved, armed chair and gave a small hand signal did everyone return to their occupations.

Emma wondered if she should again ask the queen to intervene on her behalf. Matilda, however, showed no more inclination to assist the traitor’s daughter than the chamberlain’s clerks. Nor were any of the people favored by the royal couple interested in Emma’s problems, save one caring soul, who now came toward her.