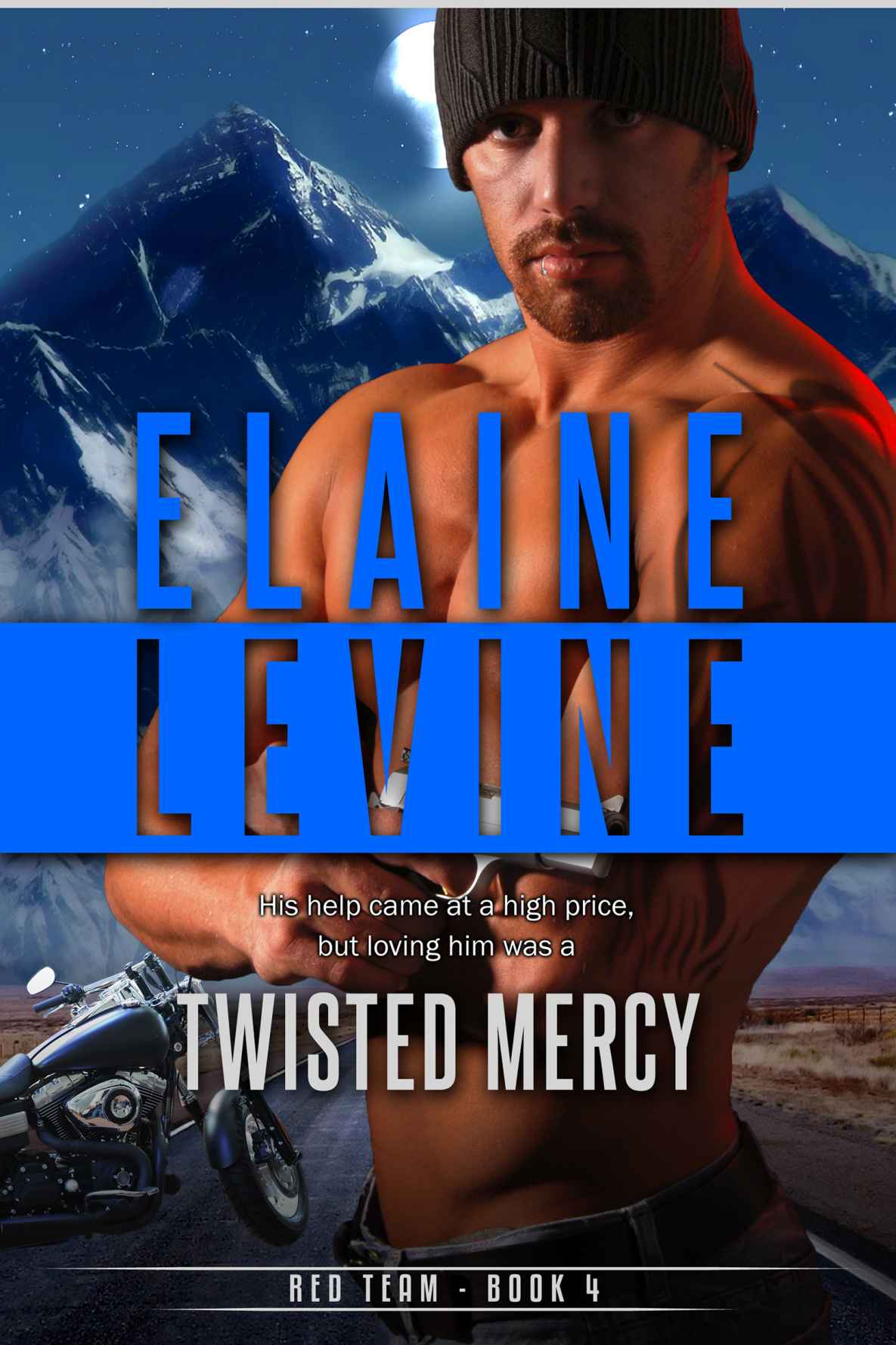 When we last visited the Red Team

A
Red Team Novel
by

© 2014 by Elaine Levine. All rights reserved

Hope Townsend has spent long years searching for the brother she was brutally separated from when their mother was murdered. Now, thanks to help from a mysterious source, she’s found him deep in the Medicine Bow Mountains on the remote compound of the notorious White Kingdom Brotherhood motorcycle club and prison gang—a viper's nest of drug runners, murderers, and thieves. The only person who can help her is one of the club’s most lethal members—a man who goes by the road name "Mad Dog."

Colorado's infamous Wall Street hacker, Max Cameron, served five years of his twenty-seven-year sentence before being recruited by the Red Team. Now a seasoned operative, Max has gone under cover in the motorcycle club of the white supremacist prison gang that befriended him in jail. His mission was simple until Hope Townsend, a female mechanic, came along and gummed-up the works.

Nothing about Hope is as it seems, and Max struggles to keep her out of danger…and out of his heart. When his team finds evidence she’s working for their enemies, Max will have to decide where his loyalty lies: with his team or with the woman he loves.

A Note from the Author:

We begin
Twisted Mercy
at the point where
Honor Unraveled
left off. To maximize your enjoyment of this serialized story, I highly recommend you read the whole series up to and including
Honor Unraveled
and
Kit and Ivy: A Red Team Wedding Novella
before starting this book!

When we last visited the Red Team…

As a refresher, for those of you who’ve read the previous books in the series (skip this summary and go read them if you haven’t yet!), this is where we left our heroes when we last visited the Red Team…

And now, we continue with Max Cameron and Hope Townsend’s story in
Twisted Mercy
…

Max watched the thin puddle of sewage twitch beneath the edge of his cell door. Like a wave, it advanced and retreated, powered not by the moon but by the rage of the other animals. They’d flooded their toilets, spilling the contents through their cells. It seeped out into the hallway and into the other cells.

He stared at it without blinking. The stink burned his nose. It was the only thing that ever changed in his six-by-nine-foot box. He couldn’t look away.

He’d known the tide was coming tonight. The animals had been screaming and shouting and clanging more than usual. He usually played along, flooding his cell too. Why not? He was never getting out of his box. It was the only way he could rebel, the only thing he could control.

It didn’t take the guards long to discover the flood. They added their roars to those of the animals until the volume in and out of his cell rose to a deafening level. The animals were charging their doors, slamming their bodies against the steel.

One of the guards opened the window in Max’s door, then he opened the bean slot. It wasn’t mealtime, so Max didn’t know what shit he was up to.

The guard tossed a letter inside Max’s cell. It fell next to the piss puddle. “That’s the last letter you’re ever going to get. Know why? There ain’t no one left to write you. Your momma died last week. Come over here and cry me a river.”

Max watched the puddle lick at the edge of the envelope. He ignored the guard. There was nothing more they could do to him, nothing else they could take from him. He had no clothes but his white boxers. No sheets. No mattress. No peace from the screams and wailing and metal clanging of the other caged animals. They weren’t human anymore.

The light in his cell was never turned off, so even when his eyes were closed, he saw the shiny gray walls, floor, and ceiling. They’d taken his days and nights. He didn’t know what sunlight looked like; he had no window and hadn’t been out of his cell in a month. He hadn’t been outside in a year. Color had become a figment of his imagination, like all of the outside world. He tried to remember it, but it was more abstract than real.

In the world where humans lived, the sky was blue, the clouds were white, and the sun was yellow and warm.

It was a legend. A fairytale. It wasn't real. Maybe it had never been real.

He watched the water reach for the envelope. It would pull it into its wet stink, take it as it moved farther down the hall.

“C’mon, Mad Dog. I was saving the letter for your birthday last week, but I forgot about it. And then I went on vacation. Didn’t get back until tonight.” The guard banged his nightstick on the bean slot, then laughed and walked away.

The puddle had consumed half the envelope. Last week was his birthday? For real, or was the guard just fucking with him?

Max lunged to his feet and grabbed the piss-soaked envelope. It had his mom’s return address. It had already been opened, as all of them were.

“My Son—” it started and ended “—you.” Everything in between was lost, morphed into a blue wash by the puddle. Max dropped to his knees. The stink pooled around him, cold on his cold skin.

There was another document in the envelope, a copy of a death certificate. His mom’s. The guard had added it to her envelope—it was folded too large to fit. The puddle hadn’t erased any of these words. Not even the ones that needed softening.

“Cause of Death: Suicide.”

She’d been dependent on painkillers for years. Even before his world went to hell.

His sister had written him, once. She’d mentioned how she was caring for their mom, learning to cook, moving her to the chair by the window before she went to school. She said he’d be proud of her, doing all the chores.

Max didn’t have the strength to hold the paper any longer. He lowered his hand, surrendering the paper to the puddle. It sank into the shallow pool, then became weightless and shimmied away. He watched it disappear.

The guards were shouting at the others to settle down. As if words could stop the animals from trying to be humans.

He dug his fingernail into the soft flesh of his inner arm and felt pain rush through him. Like a drug, it made him dizzy. He was glad he could still feel. Animals couldn’t feel, could they?

He’d lost three members of his family in the five years he’d been locked up. His whole fucking family. His father first, from shame. His sister, from a night of rebellion. And now his mom. From a broken heart.

He dug his fingernail deeper into his arm. It hurt so good. He etched away at the skin, carving a thick horizontal line. As long as it hurt, he was human. Too soon, the line ended. The pain started to fade. He panicked.

There was only one way he knew he would never forget them. He had to make a line for each of them.

The pain was intense. He stared at the bright red color that seeped down his arm and dripped into the puddle. It was the most beautiful thing he’d ever seen. The gray hadn’t taken his blood yet. He bled red; he felt pain. He was alive, still.

The gray hadn’t won. Yet.

He’d once had a thing called a heart.

The shabby interior of Hope Townsend's extended-stay motel room was as pristine as a scrubbed crime scene.

If she survived her attempt to get her brother out of his cult, she wouldn’t be coming back here. She’d planned two escape routes out of Wyoming: one took them to Washington State, the other to Maine. Both were a long, long way from the western region hub of the White Kingdom Brotherhood, but neither was fully out of reach of the WKB.

Her mom had tried unsuccessfully to disappear like this: once an enemy of the WKB, always an enemy.

Hope pushed that from her mind. One step at a time. Her eyes settled on a folded piece of paper on the corner of the desk. She picked it up and read the two words it contained: “Mad Dog” and, farther down the page, “King.”

Was King the name of the mysterious friend who’d helped her move light years ahead in researching her brother? If so, it was the only time he’d put his name to any of his correspondence. She stared at the names, trying to figure out if they were allies she should seek out or men to avoid.

Her friend had been so cryptic. His emails showed up in her computer without any identifying metadata—no subjects, no sender information, no headers that showed where the email came from, and, except for this note, no signatures. It was almost as if his emails had been composed right at her computer.

She crumpled the paper and dropped it into the waste bucket, then immediately retrieved it. She’d cleared everything of hers out of the motel room. Best not leave this behind. She shoved it into her purse, then stepped outside to her waiting truck.

On the seat next to her was the manila envelope her friend had sent her. It contained everything she needed to make Hope Townsend disappear and have Hope Nelson take her place. It didn’t include any papers for her brother, Randall, but that made sense. She couldn’t risk getting caught with them in her possession. If she was successful in getting him out of the WKB, she’d email her friend and ask for his help one more time.

Hope drove across town to her storage unit, and parked in front of the tiny bin. She switched out her old identity for the new one—the registration for her old Chevy truck, an insurance card, her driver’s license and credit cards, even her birth control dispenser. Hope Townsend no longer existed.

Welcome to her new reality, she thought, feeling both the same and different.

She gathered the elements of her old identity and stowed them in the manila envelope. Almost as an afterthought, she took the wadded-up email from her friend and dropped it into the envelope as well, then locked all of her old self away in her storage unit.