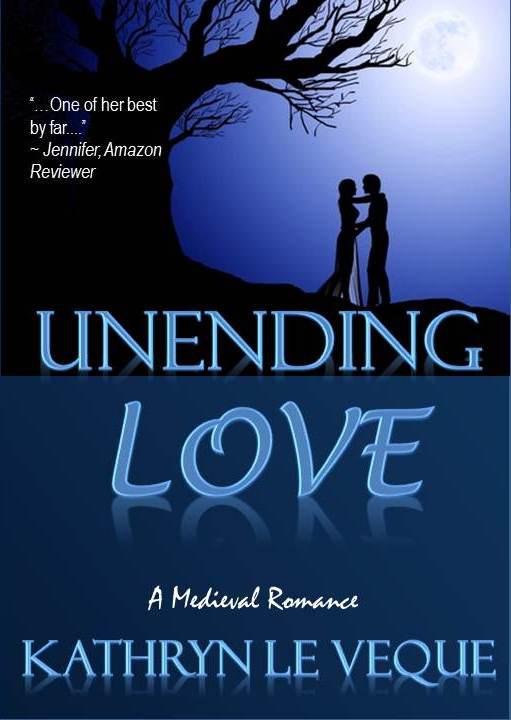 Thank you for your
encouragement and patience! Now, here it is – read it!

Thank you for keen eyes and
swift work!

Copyright 2013 by Kathryn Le Veque
All rights reserved. No part of this book may be used or reproduced in any
manner whatsoever without written permission, except in the case of brief
quotations embodied in critical articles or reviews.
Reproduced by Amazon in the United States of America

As I stare on and on into the past, in the end you emerge,
Clad in the light of a pole-star piercing the darkness of time:
You become an image of what is remembered forever.

He could hear the battle before he ever entered
the bailey.

Swords clashing, one against the other, echoed
off the great stone walls of Canterbury Castle, ancient barriers with some
Roman origin that had seen much war and strife throughout the centuries.  The
knight’s trip had been a relatively
leisurely
[J1]

journey up until that point, returning from France
as he was on a spring day that had shown remarkable weather for the eight and a
half miles it took from disembarking his ship at Herne Bay to Canterbury
Castle.

But the sounds of distant warfare had him
snapping into battle mode. The road was rocky and uneven as he thundered
towards the castle astride his new gray Belgian charger, a gift from his
father. The horse had been cooped up on a boat for over a day and was feeling
energetic, which meant he was having a devil of a time controlling the beast as
it raced towards the enormous castle compound.  The wrestling was distracting
him from his battle-readiness.

The knight bellowed at the sentries on the
wall as he approached and the men, recognizing both his voice and his armor,
began to lift the steel-fanged portcullis from its already half-open position.
By the time he pounded through the Roman arch of the gatehouse that lead to the
keep, he was bloody well angry at his new horse as well as deeply concerned
over the sounds of a battle.  It made for a snappish situation.

As the knight entered the ward, he didn’t have
far to look to find the source of the swordplay; two well-armed knights were
slugging it out just inside the gate, trying to kill each other in the area between
the gatehouse and the massive keep.  The knight on horseback unsheathed his
enormous broadsword as he charged towards them, yanking his enthusiastic
charger to a halt and trying not to lose his balance as he dismounted.  The
horse didn’t seem to want to come to a complete halt, which meant the knight
nearly lost his footing with the momentum. But he was off his horse, broadsword
gleaming wickedly in the early afternoon sun.  He was ready for battle.

Although the knight was focused on the
combatants, he could see people in his periphery, standing and watching. As he
swung his broadsword in a swift, controlled motion, preparing to enter the
fight, he could hear hissing off to his right.

Sir Maddoc du Bois came to an unsteady halt, and
the only reason he stopped at all was because he recognized the voice.  He
could see his liege, David de Lohr, Earl of Canterbury, standing on the great
retractable stairs that led up into Canterbury’s red-stoned keep.  David was
waving him over.  Broadsword still flexed defensively in front of him, Maddoc
edged his way over to his liege.

His expression, once stone-hard and focused, was
now rippling with some confusion. “My lord?” he asked as he drew near. “What
goes on here?”

David, a handsome man with graying blond hair
who had been a very great knight in his youth, was actually grinning.  More
than that, he looked very calm for a man with two knights battling it out in
front of him.  He crooked his finger at Maddoc, beckoning him closer.  Maddoc
obeyed.

“Those two idiots have been dueling for about an
hour,” he told him. “Leave them alone. One of them is about to break the other
soon.”

That explanation didn’t help Maddoc’s
confusion.  Still, he had his sword up as he watched the two men try to kill
each other.  But he was beginning to see exhaustion in their movements now that
David had brought it to his attention.

“What goes on, my lord?” he asked the obvious
question. “Who are they?”

Maddoc had no idea what the man was speaking of.
“What do you mean?”

David accepted a dented chalice of ale from a
servant who emerged from the keep and extended it to him.  His eyes were on the
fighters as he spoke to Maddoc.

“Adalind,” he repeated. “My granddaughter –
Christina’s daughter, the one who has been at court these five years past.  You
remember Adalind, do you not?”

David laughed softly. “You are too tactful for
your own good, Maddoc,” he replied. “She was the girl with teeth like a rabbit
and a penchant for making a nuisance out of herself.  For some reason, she
liked you in particular although I have no idea why.”

He spoke the last few words drolly. Maddoc gave
him a half-grin, finally lowering his sword as the two knights continued to
hack away at each other.  It was no great secret that Maddoc du Bois was a man
of great honor, skill, and had a particular reputation for being an object of
many ladies’ affections.

With black hair, bright blue eyes and an
enormously muscular build, Maddoc had more female admirers than he could
handle.  He was a great knight from a long line of great knights and something
of a legend. De Lohr liked to say there was a star in the sky for every heart
Maddoc had unknowingly broken, and he said it quite a bit so not wanting to
hear that over-used adage again, Maddoc diverted the subject by gesturing at
the battling knights.

“That still does not explain why I could hear a
sword battle a half mile away,” he said. “Who are these two and why have you
not driven them away?”

David took a long drink of his ale, watching the
spectacle like a good sporting event. “They followed Adalind from Winchester,”
he said, a twinkle in his blue eyes. “Meet Rolfe ap Athoe and Deinwald ap
Athoe, brothers who are attempting to woo my granddaughter.  At least, they
were
attempting
to woo her, one from the other, until the nooning meal
where upon Deinwald insulted his brother and this has been going on ever since.
I am anxious to see which fool falls first because neither one of them are
worthy of her.”

That explained a great deal. So there was no
crisis, only morons battling to the death over a woman. Maddoc unlatched his
helm and pulled it off, wearily, raking a hand through his black hair as he
watched the two ap Athoe brothers succumb to bone-grinding exhaustion.  Now
they were simply swiping at each other more than they were actually doing
battle.  Maddoc watched a moment longer before shaking his head.

“Are you sure you do not want me to break this
up?” he asked. “They are making an embarrassing spectacle of the knighthood and
I find that I am personally offended by the display.”

David drained his ale cup, laughing in between
swallows. “You are the upholder of knightly honor, Maddoc.  Are you sure you
would not rather see them beat each other to a pulp?”

Maddoc just looked at him. Then, with a shrug,
he handed David his broadsword and marched purposefully over to the two
combatants, who were by now showing serious signs of collapse.  In full armor
and with great mail and leather gloves, Maddoc walked up to the pair and
reached out fearlessly to disarm the first knight.  The second knight was
disarmed shortly thereafter and both broadswords were tossed to the ground
several feet away.

Without missing a beat, Maddoc balled a fist and
cocked the first knight on the jaw so hard that the man went flying back on his
arse, skidding to an unconscious heap.  With one knight down, Maddoc turned to
the second warrior, and the taller one, and did the same thing to him.  The tall
knight fell like a rock to Maddoc’s massive blow.

Several men at arms were standing around,
watching, clapping and laughing when du Bois finished off the battling pair.
But Maddoc didn’t spare a reaction to the applause.

“Pick up those broadswords and hide them,” he
commanded. “If those two want their weapons returned, tell them to see me
personally and we shall have a discussion about the idiocy of a swordfight over
a woman.”

As the soldiers moved to do their commander’s
bidding, David came down from the stairs and clapped Maddoc on a big shoulder.

“You are much like your father,” he said,
grinning. “Rhys would not tolerate foolishness, either.”

“And how is your father? Did your visit go
well?”

Maddoc nodded.  “Very well,” he replied. “My
father is enjoying excellent health and is showing no signs of slowing down
even though he has my three brothers to help him rule and administer the
fiefdom of Bellay. My uncle, the Duke of Navarre, gifted the lands to my father
a few years ago. They are very rich lands.”

“I remember,” David nodded. “And how is your
mother?”

“Elizabeau is very well also. She sends her good
wishes and affections.”

Now up to date on the health and welfare of
Maddoc’s parents, David put a hand on Maddoc’s shoulder and directed the knight
towards the keep.  “I am glad your visit went well,” he said. “But I am also
glad you have returned.  When my Captain of the Guard leaves, even for a week
or two, we all feel rather lost around here. As you can see, much has happened
in your absence.”

Maddoc lifted his dark eyebrows, arched over
those brilliant blue eyes. “So I see,” he said. “But I do not recall that Lady
Adalind was returning from Winchester.  I thought she was a permanent fixture
there, hoping to be a lady in waiting for the queen.”

Some of David’s humor faded. “That was her
hope,” he said. “She has great aspirations, you know. With all of my brother’s
connections, we were able to place her very well within the court hierarchy.
But it seems that my granddaughter has some enemies at court.”

David’s older brother was the mighty Christopher
de Lohr, the Earl of Hereford and Worcester and one-time champion of Richard
the Lion heart.  His political contacts were deep and endless. Maddoc frowned
at the last sentence.

David shrugged. “Evidently, some of the senior
ladies in waiting have taken to gossiping against her,” he said, lowering his
voice as they mounted the steps for the keep. “It took both Christina and my
wife some time to drag it out of her, but from what they can make of it, there
was much attention on Adalind of the male persuasion and the other women were
jealous.  So Adalind has come home but the men seemed to have followed her.”

World Walker 2: The Unmaking Engine by Ian W. Sainsbury
Close Encounters by Kitt, Sandra
Wicked Hunt (Dark Hearts Book 3) by Cari Silverwood
A Yorkshire Christmas by Kate Hewitt
We Will Destroy Your Planet by David McIntee
The Ballroom by Anna Hope
Not For Sale by Sandra Marton
The Changeling Soldier by Shona Husk
Heart of a Hunter by Tamela Miles
A Shimmer of Silk by Raven McAllan
Our partner