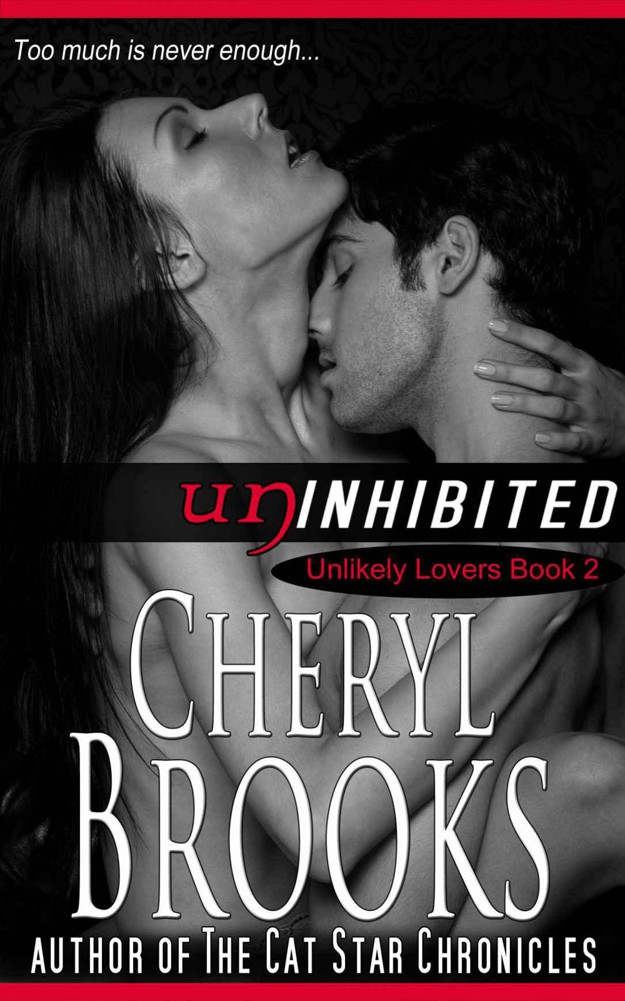 This ebook is licensed for your personal enjoyment only. This ebook may not be re-sold or given away to other people. If you would like to share this book with another person, please purchase an additional copy for each person. If you’re reading this book and did not purchase it, or it was not purchased for your use only, then please return it and purchase your own copy. Thank you for respecting the hard work of this author. To obtain permission to excerpt portions of the text, please contact the author at [email protected]
The characters and events portrayed in this book are fictitious or are used fictitiously. Any similarity to real persons, living or dead, is purely coincidental and not intended by the author.
www.cherylbrooksonline.com

Too much is never
enough…

Emily Carmichael sat at the stoplight staring off into space wondering what it would take to make her feel good again. She didn’t feel terrible—nothing as obvious as that—she simply didn’t feel
good.

A visit with her sister hadn’t improved her mood
, nor had she expected it to. Janice was convinced her husband was cheating on her. The feeling was familiar. Emily’s most recent romance had ended when her boyfriend lost interest—in the form of his erection—during their last sexual encounter. He could’ve at least
tried
to fantasize about someone else to get through it. But no, he’d turned into a wet noodle just when Emily was beginning to believe he would never finish.

A kinder man wouldn’t even have attempted it. He would’ve
explained that he needed to move on rather than leaving Emily feeling depressed, degraded, and convinced she had no sex appeal whatsoever.

Thanks a lot, Chad.

She glanced at the dashboard.
Ten-fifteen—too late to do anything now but go home.

A
s the light changed to green, a flash of neon caught her eye. Not a bar—alcohol was the last thing she needed—but an ice cream parlor, open late, aglow with welcome, and crowded with happy, chattering people.

Brakes screeching
, her car lurched through the turn as she headed toward the light.

After finding a parking space, she
leaned back in her seat, staring at the throng of ice cream lovers queued up beyond the open door. Although the line was long, every single one of those people looked happy.

Was their mood catching?
If she were to stand in that line, would she suddenly become less despondent? Surely no one was there only because they were hungry. They’d come for a treat. The question was, were they all happy
before
they arrived, or was it the prospect of ice cream that made them feel better? Taking a survey would make her seem strange. Then again, perhaps she
was
a bit strange, particularly if she thought ice cream happiness was so pervasive it would discover her sitting out there in the parking lot.

Following
a quick assessment of her mood—which revealed no change whatsoever—she concluded that she had to go inside or at least get in line.

She’d been searching for the solution to her problem for some time. Depression was
such an odd duck. Nothing was really
wrong
, nor was anything really
right
. At one time, she’d been passionate about a great many things. Now, she didn’t give a damn about anything.

Chad was easy enough to blame for her current state of lassitude,
but she suspected he’d merely been its victim. If
she
didn’t give a shit about anything, why should
he
? No doubt he’d been compelled to escape before being dragged down by her despair. Given that she’d deflated his dick, she couldn’t really blame him. She’d left her sister no better than she’d found her, either.

Christmas was rapidly approaching, which might explain at least part of her rotten mood. Weren’t suicides more prevalent during the holidays? She’d heard that somewhere, but had never understood the reason until now. Normally, she had tons of ideas for gifts—often buying them months in advance. Not this year. The only blessing of the season thus far was that she didn’t have to buy presents for Chad. Perhaps he’d left because he couldn’t think of anything to get for her and would come back after Christmas.

Her current state made her question the need to buy
gifts for anyone, especially someone she didn’t know. She didn’t even recognize the name she’d drawn in the office gift exchange.
Mitch.
Who the hell was Mitch? She hadn’t a clue who he was—and neither did anyone in her department. Perhaps some stranger had simply dropped his name into the pot while delivering lunch, intending to show up for the party to claim a gift, perhaps not even bothering to draw a name himself.

Su
ch behavior was rather low, and she’d almost decided to get him a lump of coal or a bundle of switches when someone informed her that Mitch was the man who came in after hours and cleaned the office. Small wonder she’d never met him and wouldn’t have known him even if she’d passed him on the street. She certainly had no idea what he might want for Christmas.

Which was
a tricky business. She might end up buying aftershave for a man with a full beard, a bottle of scotch for a teetotaler, or a subscription to
Playboy
for a homosexual. A Swiss Army Knife for someone who— No,
anyone
could use one of those, even if they already had six of them. Gift cards lacked imagination—aside from the fact that the recipient would know exactly how much she’d seen fit to spend on them.

She
simply couldn’t do it this year. The only practical solution was to hire a professional shopper.

At
the moment, however, ice cream was the best answer to everything.

Unlatching the door, s
he was about to get out of her car when the horror of actually going into the ice cream shop struck her. She would have to choose between a dozen different flavors and toppings, not to mention the type of cone or the size of the cup. She was within a hairsbreadth of giving up before she began when a voice spoke to her from above.

When her car door opened wider, she saw that she was being addressed by a man she’d never seen before. Was this Mitch come to tell her what he wanted for Christmas?

“I’ve been waiting for the end of the line to actually make it inside the door, but I don’t think it’s ever going to h
appen.” He held out a hand. “People keep showing up and getting ahead of me. If we’re going to get any ice cream before they close the store, we’ll have to tough it out with the rest of them.”

Although
her brain seemed to be on a ten-second delay, her body instinctively reacted to his gesture and she raised her hand, only to have it enfolded in his warm grasp. He helped her to stand, giving her a close-up view of the front of his coat.
Leather, quite worn.
Strange she would notice that detail when she couldn’t have said anything at all about the man himself.

“You
do
intend to go inside, don’t you?” he inquired. “Or are you daunted by the wait?”

“A bit,” she replied. The
wait wasn’t the only deterrent.
Choices. Too many choices
. Nonetheless, she allowed him to escort her toward the door, still wondering if he wasn’t the enigmatic Mitch, there to haunt her like the Ghost of Christmas-Yet-To-Come.

“Been out Christmas shopping and need a break?”

She gazed blankly at the pavement, barely noting that it was still covered with icy patches from last week’s snow. Paying for her inattentiveness by slipping on a slick spot, she would’ve fallen if not for his grip on her hand.

“No,”
she replied as she regained her balance.

A break? Maybe.
All she knew for sure was that she hadn’t been anywhere near a store. “No, I haven’t been shopping.”

Conversation with him was too hard. She shook her head, instead.

To be annoyed by an intrusion required absorption in some other activity. She shook her head again.

That one required even more thought. In the end, she decided that she would have to care about something in order to be upset by it. At the moment, she didn’t care about anything. “No.”

“Then why are you here?”

“I have absolutely no idea. It just seemed like the thing to do.”

“A spur of the
moment decision?”

Something in his tone made her look up at him. In another life, she might have noticed that his eyes were twinkling. She couldn’t reply to him, instead posing the only question she seemed capable of asking at the time. “Your name isn’t Mitch, is it?”

“No.
” He seemed to consider this for a moment. “Should I have lied? Is my being Mitch important to you?”

Still holding
her hand, he tucked it beneath his arm as they joined the queue for ice cream. “Is he a homeless person? Someone whose name you pulled off the Christmas tree in the mall?”

“No.
I know
who
he is—he cleans our office—but I’ve never seen him before.”

The Reluctant First Lady by Venita Ellick
Silent Storm by Vivian Arend
Learning to Ride by Erin Knightley
A Feather in the Rain by Alex Cord
Talk of The Town by Charles Williams
All In by O'Donahue, Fallon
Dead Money Run by J. Frank James
Kill List (Special Ops #8) by Capri Montgomery
Chasing Dreams (Devil's Bend) by Edwards, Nicole
5.5 - Under the Ice Blades by Lindsay Buroker
Our partner