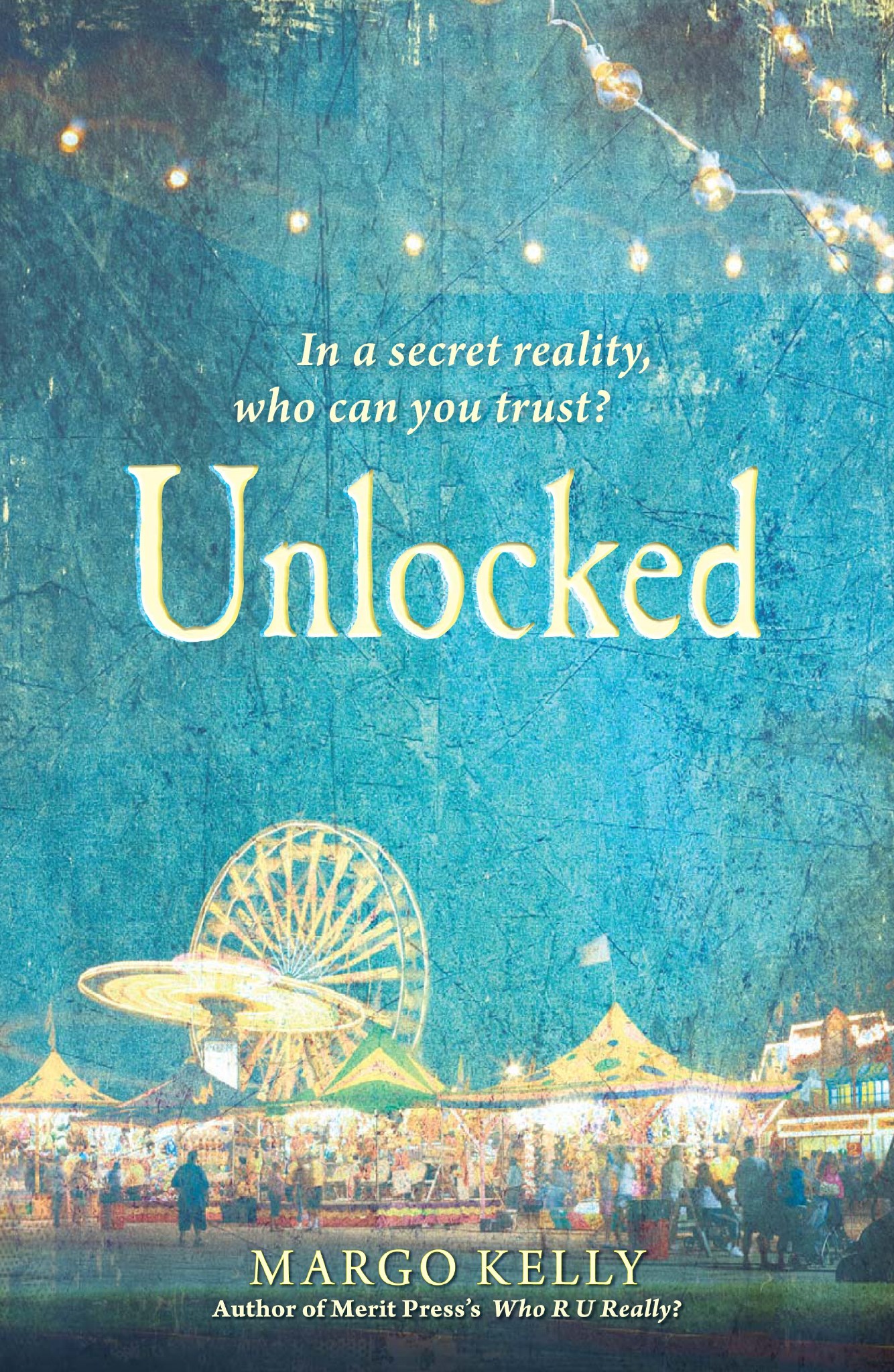 Many of the designations used by manufacturers and sellers to distinguish their products are claimed as trademarks. Where those designations appear in this book and F+W Media, Inc. was aware of a trademark claim, the designations have been printed with initial capital letters.

I hereby declare my gratitude to the people who directly influenced the publication of this story.

Brianne Johnson: You are the best agent in the industry! You've been a crucial advocate, and your support means the world to me. Thank you.

Jacquelyn Mitchard: You helped me break into the publishing world with my debut novel,
Who R U Really?
, and your continued generosity with
Unlocked
has brought me great joy. Thank you.

Merit Press: You have terrific people like Frank Rivera, who created an amazing cover, Lisa Laing, who refined this manuscript with proper punctuation and grammar, and Bethany Carland-Adams, who managed the publicity efforts with persistence and patience. Thank you.

Early readers: Your insights on character development and plot points were essential to improving this story. When I asked you to read it just one more time, you did. Michele Yancey, Shelby Engstrom, Mary Buersmeyer, Holly Barnes, Artemis Grey, Christi Corbett, and Melissa Dean. Thank you.

My family: You people are the biggest blessings in my life. Katherine, Jacob, Mitchell, Sarah, and Chris. For your daily unconditional love, I thank you.

Book One
Chaos
A peculiar sort of chaos looms beneath the pretense of peace.
Friday
August 23

Crimson lights flashed beneath the darkening Idaho sky, and swarms of people screamed as they plummeted on roller coaster rails. My friends and I passed unshaven men who blew whistles and offered the world, if you'd only play their gameâtoss their rings, shoot their balls, throw their dartsâfor a small price, of course. The tempting aroma of fried foods made my empty stomach tighten. Funnel cakes. Corn dogs. Fried Twinkies.

“Hannah, there it is!” Lily motioned toward a massive white tent. A throng of people near the opening pointed and laughed at the show inside. Lily snatched my wrist and yanked me forward, but Manny tugged me back.

“Food first.” He patted his stomach.

“No. Hypnotist first,” Lily said. “He's the whole reason we came tonight.” She pulled, and her tan shoulders hunched. But Manny held on, and together, the three of us blocked the crowd trying to move down the fairway. A tall blond lady grunted and hedged around us. Then Lily's long-time love, Jordan, laughed at our spectacle, which was the last thing I wanted. I wrenched free from my friends and took a step away.

“Oh, Hannah . . .” Lily adjusted her golden tank top. “You're crazy if you think Manny and I will ever agree on anything.”

Jordan plucked a quarter from his pocket. “Who wants to call it?”

Jordan tossed the quarter high into the evening sky. We craned our necks, and the evening breeze blew my hair across my face. I smoothed it back into place as the coin crested and began to fall. Jordan reached for it, but a burly manâtoo busy laughing to watch where he was walkingâbumped into Jordan before he caught the coin.

“Dude! Watch out!” Manny yelled at the stranger. I wrapped my fingers around Manny's arm, and he relaxed. The offending guy held his hands up in apology and wandered away.

Manny raked his fingers through his thick chestnut hair. “Let's get the hypnotist over with so we can enjoy the rest of the night.”

Lily beamed, and her hazel eyes sparkled. “We need to hurry and get our seats. The next show starts in ten minutes.” She grabbed Jordan's hand, and they darted toward the white tent, but the crowd from the previous performance flooded out and blocked their path.

“Thanks,” I said to Manny. “I just want everyone to get along and have fun tonight.”

Manny laced his fingers through mine, and my heart fluttered. Would tonight be the night we finally kissed? We'd been friends for years, but we just officially started dating last week. He was the best thing in my life, and I wanted to be with him forever. He squeezed my hand, and we meandered over to the tent to wait with Jordan and Lily.

Jordan fiddled with the gold hoop dangling from Lily's ear, and she fussed over the spikes in his sun-bleached hair. They were the poster children for cute couples. Lily had even bought Jordan a plaid shirt with golden lines through it to coordinate with her tank top, and they both wore faded denim shorts and Converse sneakers.

The crowd of people cleared, and we ducked inside the mammoth structure. Spotlights illuminated the entire space and rock music blasted from corner speakers. Stands of bleachers spanned two-thirds of the perimeter, and a stage filled the remainder. Men, like a colony of worker ants, moved around, sweeping and rearranging chairs for the next show.

Lily claimed a spot near the middle front of the bleachers, and I perched next to her. A shiver ran up my spine when the cold metal touched the backs of my thighs. I wedged my fingers beneath my legs, and my silver bracelets clanked against the steel.

“Why do you want to sit so close?” I raised my voice over the blaring song.

“To get picked for the show.” Lily bugged out her eyes, as if it should've been obvious.

My throat tightened at the idea of making a fool of myself in front of everyone. I wished we could move further back, but all around us, the stands were filling fast.

Over the noise, a familiar hee-haw laugh split the arena: Chelsea. She and her date, Mark, bounded toward us, her long tan legs accentuated by her short shorts. Her single blond braid swished back and forth as she moved. She was a starting center for volleyball and towered five inches over Mark, who was a second-string tight end for the football team. He had to move twice as fast to keep up with her, but he had pursued her ever since she moved here last fall.

“You didn't save us seats?” Chelsea asked.

“It flooded with people too fast,” Lily said. We hopped up and exchanged hugs with her.

Jordan stepped in front of Chelsea and fingered the collar of my white blouse. “You'd be hilarious hypnotized,” he said.

“No, I wouldn't.” I swatted his hand away and straightened my collar. “Besides, it's only entertainment. A gimmick.”

“Jordan's right,” Chelsea said. “You would be funny onstage, but you're way too uptight to be submissive to anyone.” My jaw dropped, and Chelsea laughed.

“I'm not uptight,” I said, but my words faded into the deafening music. I just never wanted to be disorderly like my dad. He embarrassed Mom so many times in public. She would flush beet red as she worked to quiet his outbursts. One evening back in New Jersey, when I was eleven, Dad refused to get into the car. Mom started the engine and threatened to leave him in that crowded mall parking lot. I loved him too much to abandon him there. I pleaded with him, and when I reached for his arm, he backhanded me. My head flung to the side, and the pain seared through my cheek. Less than twenty feet away, a trio of girls from the popular clique gawked at my family's debacle. Their ringleader cocked an eyebrow. Then the girls snickered and scurried away. I fought back my tears and turned toward Dad. I opened his door and waitedâkeeping my hands to myself. Several minutes passed before he relented and sank into the passenger seat. He never touched me again. He died three months later.

The music in the arena suddenly changed from blaring rock to a peppier pop song at half the volume.

Chelsea edged around me and took my seat. “Well if you're too chicken to be in the show, Lily and I can volunteer.”

Chelsea shrugged and surrendered my seat. “Fine, just make sure you entertain us.” She grabbed Mark's hand, and they ran off to claim spots at the top of the bleachers.

“Don't let them badger you into doing it, if it's something you don't want to do,” Manny said. His towering six-foot frame shaded me from the arena's spotlights.

His brown eyes widened, and he caressed my cheek with his smooth fingertips.

“Oh gag.” Jordan pretended to barf. “It's a good thing we haven't eaten yet; otherwise I'd be blowing chunks all over you two.”

“Stop.” Lily pulled him toward her, and he sat to her right. I sat to her left, and when Manny took the spot next to me, he wrapped his arm around my waist.

He whispered in my ear, “You're amazing.” His breath made my skin quiver.

A guy on the stage thumped the microphone.

“Ladies and gentlemen,” the announcer said, and the song changed to an anthem of drums and guitars, building the excitement. “Tonight, I have the honor of introducing the mystical Master Gira.” The guy swept his arm to the side of the stage, the drums beat at a maddening level, and the crowd applauded as a man stepped onto the stage. He wore powder-blue sneakers, worn-out jeans, and a white button-up collared shirt beneath a black blazer. His face, too tan. His hair, too white. He clapped his huge hands together, and his bleached teeth glowed under the glare of the spotlights.

Lily whacked my knee. “Volunteer with me.” She twisted several strands of her long brown locks around her finger. “Take a risk with me. Life is meant to be lived. Please?”

I glanced up at the stage and back at Lily. “I'll do it, but only because we're friends.”

“Yes!” Lily threw her arms around my neck. “Best friends.”

“Welcome to my Mystical Madness!” Master Gira swung the microphone stand out of his way and clutched the mike with his other hand. The crowd cheered.

He spread his arms wide and asked, “Who's been hypnotized before?” Half the crowd thrust their hands into the air. They clearly thought this was no big deal. Maybe I
was
too uptight.

“Who thinks it's all a giant hoax?” he asked. Lily clutched my wrist and raised it high. I yanked it back down, but the master mystic had already locked eyes with me. He raised his bushy white eyebrows and strutted to the left side of the stage.