Unravel a Crime - Tangle With Women 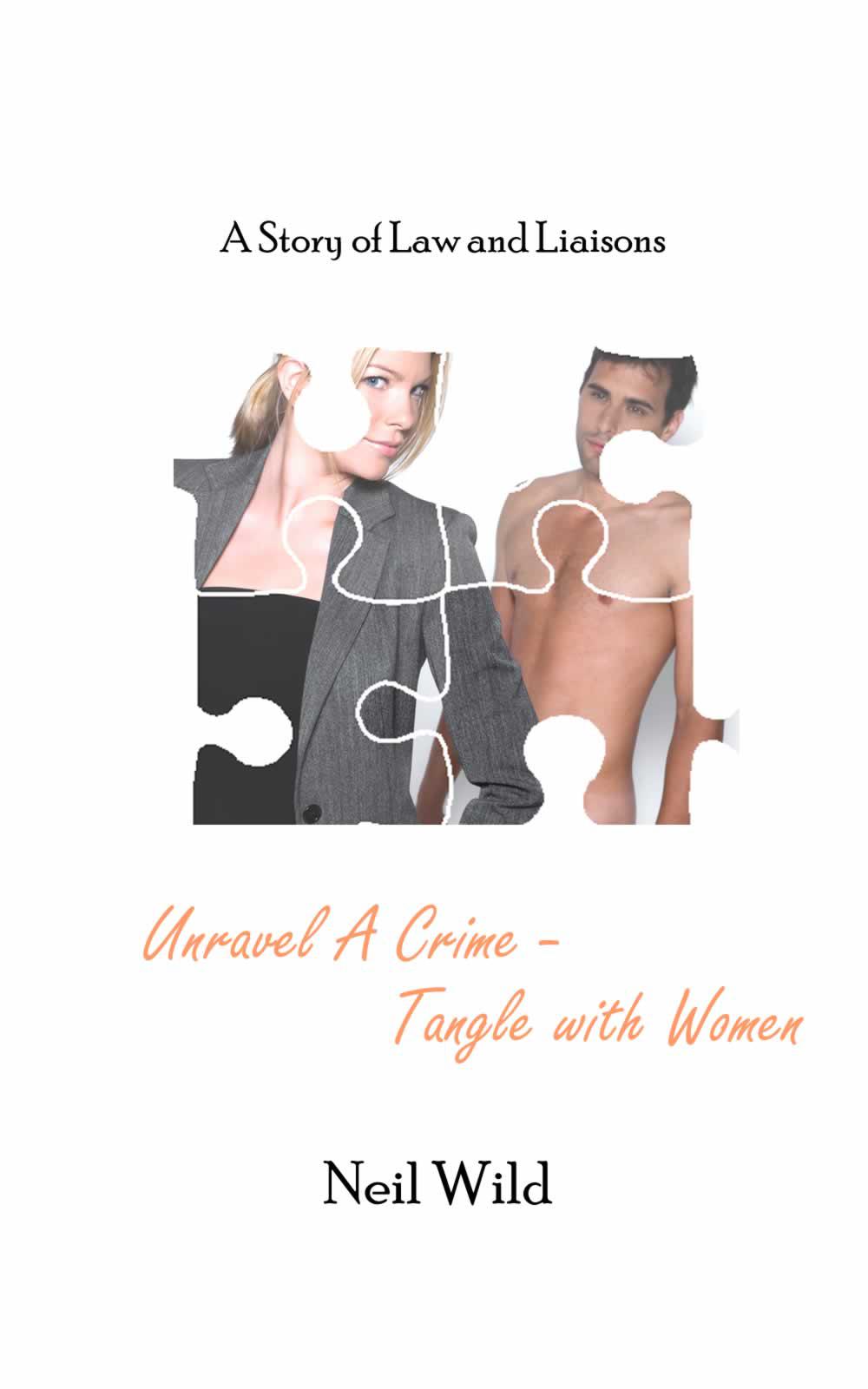 Jonny Brakespeare is a young English lawyer returning to practice after a period of suspension . He is desperate to restart his career, but finds himself temporarily working in a firm where the partners have a vested interest in the outcome of the white collar crime he is to defend, while outside the office, he is both sexually involved with Mel, a dancer, and receiving seductive conciliatory pressures from his former wife, Sophie. With the job comes the complication of Lisa, his attractive American assistant.....

Brakespeare is further put under pressure by his client Newberry, who has serious heart problems, and for whom the stress of a trial could be fatal. It also turns out that Newberry’s private life is far from straightforward. Everyone it seems, like Brakespeare, carries personal baggage. Nonetheless with Lisa’s help, he manages to find gaps in the evidence, and a scandal undermining the prosecution.

If you enjoy Grisham, you will enjoy Wild.

Unravel a Crime; Tangle
with Women
A Novel Based on a True
Story
By
Neil Wild
Text Copyright © 2012 Neil Wild
All Rights Reserved

Unravel a Crime; Tangle with Women

A Novel Based on a True Story

“
It’s not going to be easy for
a man like you I’m afraid.” His soft voice blunted the edge of what he was
saying.

“
And then there’s the
recession. I don’t know a law firm that hasn’t had to tighten it’s belt. We
can’t find enough vacancies to fill, even for criminal lawyers like yourself.”

“
But I can do general
litigation.”

“
Even that’s a problem. No-one
gets divorced because they can’t sell their house, and split the money. The
less business that commercial clients transact, there’s less to argue about,
and so they don’t need lawyers.” He sighed. “We’ll see what we can do of
course, but with your unfortunate track record, who is going to take you on when
they can have someone with a clean record?”

“
You don’t mince your words do
you?”

“
What about temporary jobs;
locum positions?”

“
Same sort of problem. If a
fee earner goes on holiday or falls ill, firms tend to pass the work around the
office to save money. Sorry but,” he shook his head again, “think of Mr.
Micawber”.

“
Not into the Classics?
Dickens; David Copperfield. Be like Mr. Micawber – ‘
At present, and
until something turns up (which I am, I may say, hourly expecting), I have
nothing to bestow but advice.’
That should
apply to every lawyer.”

“
That’s the best advice that
you can give me?”

“
That’s my life at the
moment,” thought Brakespeare. “Waiting for something to turn up. Thank God for
sex..”

That evening, back at his
rented room in Milton Keynes, he immediately went into the shower to wash away
the grime of London. He hated the way it made the collars of his white shirts
black.

After ten minutes of
indulgence, the water started to run cold as it always did. He stepped out of
the shower, dried himself, and put the towel round his waist.

There was a knock on the
bathroom door. “That you, Jonny?” Without waiting to be asked, the brown girl
bounced in.

Brakespeare’s head dropped
against her shoulder.

“
Never mind. Let’s cheer you
up in the usual way.”

She opened her mouth slightly,
and, looking deep into his eyes, pressed her lips against his, while at the
same time she undid his towel.

“
More?” Brakespeare panted,
their bodies slippery from perspiration. Mel just looked at him through dilated
pupils..

The annoying sound of a Latin
American ring tone grew louder and more insistent from the black Samsung on the
bedside table.

Instinctively Brakespeare
reached for it.

Mel groaned and rolled on her
side.

Brakespeare leaned over her,
and picked up the phone. It was a London number that he didn’t readily
recognise. He looked at Mel. She had her eyes shut and was lying still,
waiting. The spell had been broken, and his own passion was subsiding.

With his thumb he slid the
phone open and put it to his ear. He fell on to his left side, away from Mel.

Brakespeare recognised the
voice of the man from the agency..

“
Is it convenient to talk?”

Mel could hear what Nick was
saying, and moved onto her back to hear better.

“
Sorry to bother you in the
evening, but we’ve had an urgent call from a firm in Worcester. Could you go
there?”

Brakespeare would have gone
anywhere for work.

Nick chuckled. “I told you
that something would turn up, but I didn’t expect it to be so soon. Their main
litigation partner collapsed in Court today. They need someone to take his
place urgently. There’s a criminal case that needs looking at immediately.”

“
Sounds just the ticket.”
Brakespeare replied trying not to sound too excited. Mel had begun caressing
him.

“
I faxed them your C.V. and
they said it fits the bill. Could you go there tomorrow?

There was no reason why not.
He had nothing else to do.

“
Have you got a paper and
pencil, I’ll give you the details.”

With a grin he knocked Mel’s
hand away, and gave her a kiss. “Think of this as a commercial break”, he
whispered. She giggled.

“
Just a moment.” Brakespeare
was not going to give a detailed explanation as to his present circumstances.
He put the phone down on the bed, and jumped out, going towards his briefcase.

He quickly found his Counsel’s
notebook and a pen, and turned back to the bed.

Mel was waving the phone,
indicating quite clearly that she was threatening to speak to Nick.

She giggled again. He sat on
the bed, the notebook on his naked lap; the pen in one hand and the phone in
the other.

Mel came up behind him, put
her arms round his neck, and started nibbling his ear.

“
Sorry about the background
noise,” Brakespeare said down the phone. “Now, where am I going?”

It was a fine June day. Jonny
Brakespeare was by now very tense. The traffic down the M5 motorway had been
too heavy, and from junction 7 into Worcester it had been stop-start motoring.

He remembered the symptoms of
stress from the old days; his stomach churned with anxiety, and there was a
tight band round his heart. His palms stuck to the plastic of the steering
wheel.

His first job for a year, and
he was about to start with a black mark.

He drove the green Fiat Punto
into the roundabout by the Cathedral, and headed for the gates of College Yard,
where he been told he would find a parking space allocated to him.

As he drove between the entrance
pillars, a little man in an old, grey, ex-military great coat and a peaked cap,
suddenly appeared, and stood in the roadway, blocking his entrance and glaring
at him.

Brakespeare felt his heart
pound even more, and he took a deep breath as he pulled slowly to a halt.

The little man came round to
the driver’s window. Brakespeare wound it down and tried to appear calm.

"What you do here'?"
asked the little man aggressively in a thick mid European accent.

"My name is Brakespeare.
I have come to work at Mortimer Ridley, the solicitors over there." He
pointed vaguely to any of the doorways in College Yard. "I understand that
a parking space is reserved me. "

He paused; attack was always
the best form of defence. "Are you the parking attendant here?”

"Then you have not been
told?"

It was clear that the little
man had not been told. He could not have been told, so late had the
arrangements been made the night before. The man was now looking a little less
aggressive, and a little more uncertain. He shook his head as he looked at
Brakespeare Perhaps this man was important. Mortimer Ridley was a firm of
solicitors. Solicitors, he knew from his years in England, were important
people. He always touched the peak of his cap to Mr. Mortimer, Mr. Ridley and that
poor Mr Morrison.