The Blooding of Jack Absolute 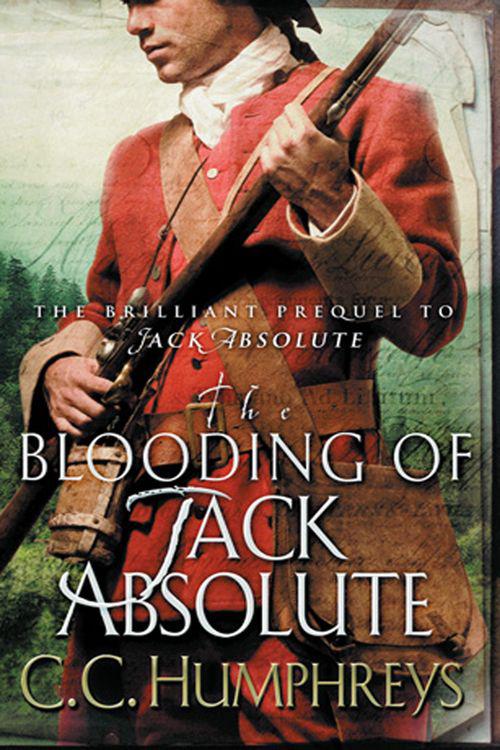 The Blooding of Jack Absolute

‘A roaring adventure whose pages are remorselessly consumed … In this prequel, Humphreys begins the finest series of historical
novels since O’Brian’
Good Book Guide

‘[A] most satisfying novel. Humphreys makes writing historical fiction seem easy. He brilliantly combines meticulous research
with a breakneck pace and a terrific sense of humour’

‘Falling somewhere between the novels of Bernard Cornwell and Wilbur Smith, C. C. Humphreys has fashioned a rollicking good
yarn that keeps the pages turning from start to finish’

‘How he fulfills his mission is told with enormous zest in this splendid, rip-roaring story … a fine addition to the tradition
of swashbuckling costume romance of which Robert Louis Stevenson is the incomparable master’

THE BLOODING OF
JACK ABSOLUTE

The End of Time came on a Wednesday – and Jack was missing it. There was rage and riot in every corner of the realm, all because
the Papists, led by some downser named Gregory, had stolen near half of September. He didn’t really understand how that could
be, how True and Christian Englishmen could let a Pope tell them what to do; but the Government had ordered it so, surrendered
to the will of those beyond the sea: Froggies, Italians and the like. Jack had never met any but he knew they wished him no
good. And, like any other native of the Isles, he wanted to join his voice to the others, cry out, ‘Give us back our eleven
days!’ The word had spread, just ahead of the flames. In Exeter, they’d burnt down the Court House. In Plymouth, seafarers
from Naples had been tarred and feathered. And anything they could manage in Devon – where the people were known to have wishbones
where their backbones ought to be – the Cornish would top. They’d be kicking up a dido all around and Jack had plans to join
in, wasn’t going to rest content with a little fuss in the village. No, he and some of the other Zennor lads were bound for
the big town –Penzance. Three hours across the fields, if they took it at a clip. He’d been there twice, never seen anything
so vast. All sorts lived there, including, no doubting, foreigners! They’d get what they deserved. And Jack would be there
to see it.

Except he wouldn’t. Not unless he could shift these bonds.

He strained against them, again to no effect. It was Lutie Tregonning who had tied them and Lutie, when he wasn’t digging
for tin in the Absolute fields, was a fisherman and knew his knots. Though he’d shaken his head and muttered while he did
them, he’d had his commandments from the squire and did a proper job. His liking for Jack didn’t extend to risk losing his
livelihood.

The hempen coils were passed through an iron hoop, which was driven hard into the wine cellar’s wall, then anchored to a barrel.
The length of cord meant Jack could stand, crawl to that barrel, even draw some wine out from its spigot. He’d tried to console
himself with that, had lain underneath the tap and sucked. But the wine had gone off, its foul sharpness still coating his
mouth an hour later. An old pint pot lay under the tap for catching drips and it gave off an acrid, vinegar smell, its surface
thick with tiny black flies.

Something moved in the house above. Someone coming for him? He tipped his head. Through the door came only the same muffled
shouts, snatches of song, banging of tankards. His uncle was still celebrating some change in the family fortunes. Duncan
Absolute was not renowned for being sober – indeed, he was universally known as ‘Druncan’ – but this debauch outdid even the
King’s last birthday. His cronies from the Plump Pigeons had arrived three days before and never left. This annoyed Jack.
When his uncle was this drunk he was easy to elude. So how was it that he’d been caught?

Jack spat into the corner but sourness clung to his tongue. He knew how, knew his betrayer. Duncan’s son, ever mindful of
a chance to do Jack down, would have stayed watchful. So when Jack, forbidden to leave the house, ordered to slave doubly
hard on all the guests’ horses and carriages, had snuck from the barn on his way to the rendezvous of the brave boys bound
for Penzance, Craster Absolute was waiting.

Craster. The image of his cousin’s smirking face, peering from behind Duncan’s back as the man raved and frothed,
made Jack tug again against his bonds until the skin at his wrists bled, still to no avail.

Another sound distracted him, the faint booming of the surf beneath Zennor Head. Jack listened, to the long roll, the crash
as the wave smashed down. He didn’t need to see it to tell that the tide was running strong and it made his imprisonment all
the worse. If he couldn’t be in Penzance, he could at least be there, plunging into those waves, he and Treve Tregonning,
hurling themselves ahead of the walls of water just before they peaked, riding them to the shore line, their bodies straightened
out like arrows, neck bent up, hands thrust ahead to steer. In the chill, pulsing water, the shock and the thrill of it, timing
it just right so that you were in and on and of the falling cliff of salt, using its power till the very end, gliding gently
onto your belly in the sand, to leap up, turn, run in again and again, until you were blue and shaking and had to stop or
drown. Some had, Billy Wits last year, and the activity was strictly forbidden ever since – such prohibition making it all
the more delicious.

That
was
a sound now. The door above opening, feet on the stairs. Jack tried to guess whose footfalls it could be, how he could prepare
for whoever was coming through the door. Duncan had promised to return to punish. Craster would be there to watch and gloat.
The key shrieked in the lock. The door swung in.

If Jack could have moved, he would have leapt to the ceiling in his relief. For in the doorway, filling it, was the comforting,
near-spherical shape of the housekeeper of Absolute Hall. Morwenna Tregonning, Lutie’s wife, Treve’s ma, and the only woman
in the world Jack loved.

‘Ah, there’s the dear of him.’ Morwenna raised a chubby finger to her lips, thrust out beside the lamp she held. ‘Hush now,
my lover, and no fuss, see.’

She put the lamp on a barrel top, pulling the two huge jugs dangling by their handles off one forearm. Straightening, she
let out a sigh and rubbed at the small of her back.

‘They’ve finished them casks they dragged up bevore. Now they want beer vor their terrible thirsts. Then it’ll be the brandy
again. Tis a circle I can’t see closing this side o’ Sunday.’ She came over and bent again, her hand pulling his thick black
locks away from his eyes. ‘How are ’ee then, Jack?’

‘Proper,’ he replied, and tried to smile.

‘Ess, look proper too,’ she said sadly, lifting the bound wrists, her finger lightly touching the reddened skin. With a sigh
she lowered herself to the floor to sit beside him, pulling his head over so it could rest against her considerable chest.
‘Can’t stop long, vor they’ll be missing the beer. But I brung you this.’

From a cloth bag at her waist, she pulled out a pear-shaped object. Jack, who had not eaten in a day, leaned forward excitedly.
‘Figgy Hobban,’ he cried.

‘Was makin’ a batch for the squire and his friends so I snuck one off the tray. I’ve orders not to feed ’ee but if you sup
up every grain, so none ’ull see … now, I bain’t able to free your poor hands—’

‘But mayhap you can feed yesself if I holds it here.’ She held the delicacy in her cupped palms and Jack bent over them, biting
off the pastry plug, chewing swiftly to the sweet raisins within. As he chewed, Morwenna talked.

‘Oh, Jack, you’m daft as a carrot half-scraped! Why could you not have bided? They’re drinking and drinking, o’man, like the
drink’s about to end for ever and they better get it down. And though it’s all “Damn the Jacobites!” and “Health to the fair
maids” now, it’ll be blows bevore supper. And I fear’s them’s to fall on ’ee, sure enough.’ As Jack had guzzled more than
three-quarters of the pastry, she was able to remove one hand to stroke his head. ‘I told ’ee, sure: the more you meddle with
an old turd, the worse ’ee do stink. And your uncle’s reeking foul now.’

Through a mouthful of dough and raisin, Jack spluttered,
‘When Druncan’s that gone, his switch arm tires fast. I’ll be right.’

Morwenna hesitated, taking her lower lip between her teeth, chewing at it. Finally she said, ‘Trouble be, I just heard ’un
say it’s time his son and heir had the correction of ’ee.’

Shite,
thought Jack, and felt the first real prickle of apprehension. Craster was two years older, big for eleven and strong with
it. He’d beat Jack till his arm fell off.

To counter his fear, Jack sought his ready bravado. ‘Anyway, “son and heir” is a big name for such a coose downser. He may
be the son but he’ll be no heir. Craster Absolute’s a bastard, just like me.’

Morwenna hit him lightly for the cuss words for though she swore as hard as any miner’s wife, she made to curb it in the young.
Then she stroked where she’d struck, continued, ‘And didn’t think any less of ’im than we did of ’ee. But this party is not
for nought, o’ man.’ Her voice dropped to an excited whisper. ‘There’s tin found on the Absolute lands, a brave keenly lode,
they say. T’will make Duncan Absolute rich.’