Read Up in Flames Online 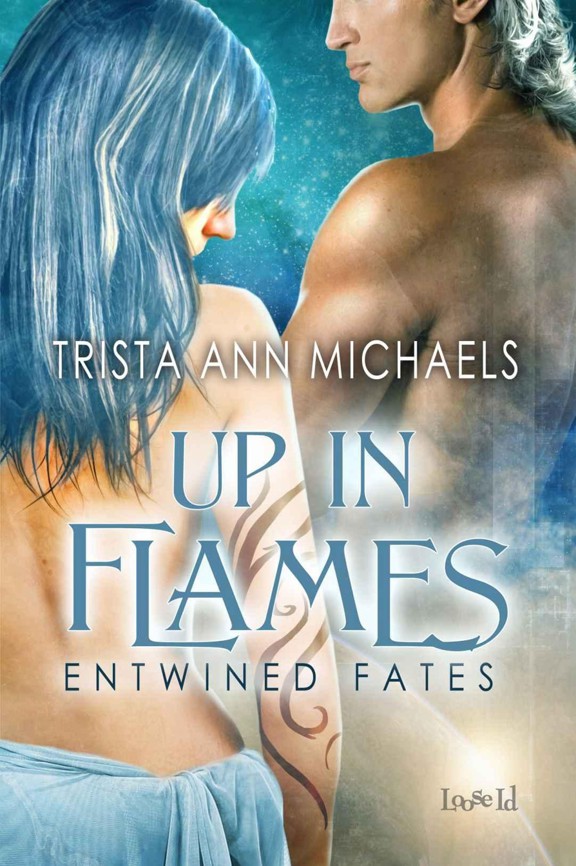 Entwined Fates: Up in Flames

Morning sunshine filtered through the blinds on the windows, casting lines of light and shadow along the tile floor as Cara made her way down the hall toward her father’s chambers. He would be having breakfast about now, watching the gray-blue snow fall outside. He loved this quiet, peaceful time of day.

There wasn’t a lot of peace on Bellara lately. The threat of civil unrest was heavy in the air. Her father, Chancellor Nubel, wanted to dissolve the chancellorship in favor of a senate. It was something he’d been thinking about for a while and something the planet’s ruling families didn’t want.

An alliance with the galactic senate would mean a senate seat and a voice on the planet of Rhinari. It would also mean a change for the better for the people and protection for their home world. Protection from the ever-increasing threat of invasion for minerals and gold that was prevalent in the surrounding mountains.

Cara was for dissolving the title that would one day pass to her. As the only child of Chancellor Nubel, she’d been groomed all her life to one day take over the position, second to her training as a Mundi, which some higher-ups had a problem with. There’d never been a Mundi as chancellor, and some ruling families had expressed reservations about what they saw as a conflict of interest.

A Mundi was a soldier, an assassin. A Mundi lived without emotion, without regret, without compassion. A Mundi could never rule.

She felt trapped and pegged…lonely. Life as the chancellor’s daughter left little breathing room. Her only freedom, if she could even call it that, was her training as a Mundi officer.

She’d started at a young age, as soon as her telekinetic ability had been discovered. She could move objects with her mind, even people. She could easily throw a man forty feet just by thinking it or guide an arrow to its deadly mark and much more.

As a Mundi, she’d been trained to suppress many things, primarily her emotions. She often shuffled through life feeling little, and what she did feel, she kept hidden. Even her father commented on her stony demeanor. He didn’t like it, and her lack of emotional response saddened him.

It saddened her as well. If she could feel sadness. To be honest, she wasn’t sure what sadness felt like. Nor happiness. She felt nothing. It was who she was now. It was who she had been trained to be. She couldn’t change who she was any more than she could stop breathing, but on occasion, an emotion unfamiliar to her would take hold and startle her.

It would leave her feeling out of sorts and confused. She would try to hold on to the emotion, especially if she was alone, so she could exam it, understand it, but it seldom remained. Her learned instincts were to tamp it down. It was what she’d been taught her whole life. She didn’t know any different.

A dark shadow moved past the open window lining the hallway, and Cara stopped, curious as to the cause. She stealthily moved closer and stared through the slits in the blinds at the small ship hovering too close to the outer walls. Pilots on maneuvers knew better than to fly at such close proximity. Someone would be grounded; she’d make sure of it.

With her usual stone face, emotionless demeanor, she turned from the window and kept heading down the hall, putting the rogue pilot from her mind for the time being. She’d deal with that later. Right now, she needed to speak with her father about the upcoming meeting with the Rhinari regent about their future alliance.

Signing a treaty with Rhinari would open up a whole new world for Bellara. They would appoint a senator, participate in senate hearings, and her home world would definitely benefit from not only Rhinari’s umbrella of protection, but from trade opportunities as well. Her father needed to finalize the union; the sooner, the better.

Rumors were beginning to spread about royals growing angry about having to share their regions with senators. The royals still believed rulers should be born into the privilege, not voted in by the people. They didn’t want change. They wanted to keep the status quo.

Her father wanted a partnership with the senate and freedom for his planet. Freedom for his people to prosper, to grow, to advance in ways not possible now. He wanted freedom for them to explore their galaxy and beyond. Her father had an unusual view of how life should be, and he’d raised her to see the benefits of such a union.

She hoped they could make it happen before the royals decided to revolt.

Cara opened the door to her father’s private chambers and froze. On the floor next to an overturned chair and shards of broken pottery was her father’s crumpled body. She ran forward and crouched by his side. She searched frantically for a pulse but found nothing.

Swallowing a sob, she stood and stiffened her spine. She’d been trained to overlook death, to bury her emotions and move on, get the job done. But what job was she supposed to do? Her father lay dead at her feet.

She scanned the room. Where was everyone? There should be guards here, lots of people. Had her father’s killer been one of them? Was he still here somewhere? She tried to listen for any sound, any movement that might give away someone’s hiding spot.

Outside she could hear the low roar of the hovering ship’s engines. Did it have anything to do with her father’s death? Should she go after the pilot? Who could she trust?

Her father’s personal assistant, Lenak, came barreling through the side door out of breath and frightened. “Lady Cara,” he called as he sprinted forward and grabbed her wrist. “I’ve been looking for you everywhere. We must get you out of here.”

“Who did this?” she demanded, jerking her arm free. “And where the hell is everyone?”

“I don’t know. I came in after it happened. They’re looking for you.”

“How do you know that?” Her anger rose despite her training.

“I don’t for sure, but you’re next in line. It only stands to reason. The royals don’t want this alliance, but I never imagined they would go this far. We must get you to the senate on Rhinari. You have to see this through.”

Cara glanced down at her father one last time and swallowed the lump of hurt and despair that threatened to choke her. She reached down to retrieve the charm of the family crest her father wore around his neck, but Lenak jerked her back, almost pulling her off her feet.

With a nod, she followed her father’s assistant down a secret passage. It never entered her mind to not trust Lenak. He’d been with her father for as long as she could remember. Lenak loved her father.

“Your father keeps a ship here. It’s one of the fastest in the galaxy. Its speed should be enough to get us through the resistance.”

“Us?” she asked, raising an eyebrow. “Lenak, I can take care of myself.”

She pushed past him and into the private launching pad where her father kept a variety of ships for his use.

“If I stay, my lady, I will be murdered along with everyone else in the house.”

Cara stopped dead in her tracks and turned to face the older man. She could not leave him behind. “Get in,” she demanded, waving her hand toward the small ship.

Lenak rushed inside, bowing his head as he passed. Cara could never let anything happen to him. Despite her training, despite the coldness that often carried her through, she couldn’t bring herself to allow Lenak to die. Not after losing the only parent she knew.

She again swallowed unfamiliar emotions. She’d never dealt with a loss like this. She’d killed people protecting her father or members of his household but had never lost anyone close to her. Truthfully, she’d never had anyone close to lose.

With one last glance at her home, she jumped into the ship and took the seat next to Lenak.

“It takes two to operate this ship. Can you fly?” she asked as she turned on her own control panel.

“Actually, yes,” he replied. “I often flew with your father.”

Cara nodded in acknowledgment. She should’ve known that. Three men burst through the doors on the opposite side of the hangar bay and began firing at the small ship. Each shot caused the vessel to shake as Cara throttled the engines. She wasn’t worried. The ship’s deflector shields were secure.

She hit the torque acceleration button, and the engines roared to life. Without waiting for Lenak’s confirmation of full power, she pulled the throttle back, sending the ship flying forward through the portal and into the clear blue sky toward space.

“They will try to follow,” Lenak said, his voice shaking.

She kept her gaze ahead and her mind on the escape, forcing thoughts of her father away. She had to for survival. Otherwise her emotions would take over when she most needed them to remain buried. She would grieve later. Right now, she needed to escape. The fate of her home depended on her making it to Rhinari.

They pushed through the thick atmosphere of her planet and headed out into the deep vacuum of space. Another ship merged from vapor as its veiling device disengaged, catching Cara off guard. They fired a shot, hitting the engines through a weak spot in her ship’s shields. The engines exploded with a loud
bang
, disabling the ship’s warp drive.

“Shit,” she griped, rushing to the back of the ship to put out the flames.