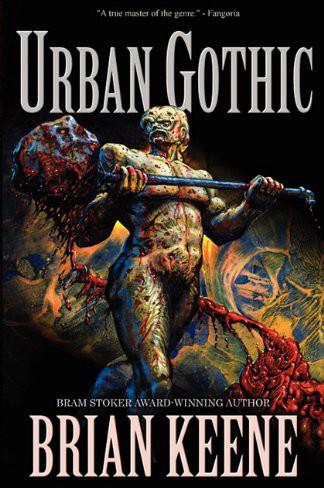 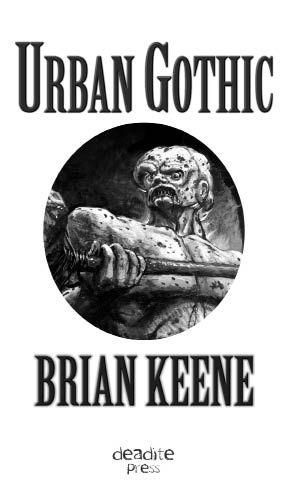 Although this novel takes place in Philadelphia, I have taken certain geographical liberties with the city. If you live there, don’t look for your street corner or block. You won’t like what’s lurking beneath the sidewalks.

A Gathering of Crows

For this new edition of Urban Gothic, my thanks to everyone at Deadite Press; Alan Clark; Kelli Owen, Mark ‘Dezm’ Sylva and Tod Clark (who pre-read the original); James A. Moore; Paul Synuria; Mike Lombardo (for the Phillipsport shirt); Mary SanGiovanni; my sons; and my loyal readers.

For Edward Lee, who once gave me crabs …

A car rolled slowly past, its underside so low to the ground that it almost scraped against the road. The windows were tinted, and they couldn’t see the driver, but the vehicle’s stereo was turned up loud enough to rattle their teeth.

Brett sighed in frustration. “Now’s not the time, Javier.”

But he’s right
, Kerri thought, gazing out of the passenger window.
Javier is right. There’s no rhyme or reason to it. Sometimes, events just spin out beyond our control. Sometimes, no matter how careful we are, no matter how much we try sticking to the script or routine, our day gets off track, and nothing we say or do will fix it before night comes around. Shit happens. And when it does, things get fucked up.

However, while the situation they were in now was indeed fucked up, it wasn’t just a simple case of “shit happens”—at least, not entirely. Perhaps some of it could be blamed on fate, but the rest of it was purely Tyler’s fault.

Kerri wondered how it was possible to simultaneously love and hate her boyfriend—because that was how she felt.

They’d driven in from the suburbs of East Petersburg to attend the Monsters of Hip Hop show at the sprawling Electric Factory club in downtown Philadelphia. While the venue wasn’t in the best part of the city, the show had definitely been worth it. Headliner Prosper Johnson and the Gangsta Disciples had gathered together some of the biggest names in hardcore, gritty hip-hop for a nationwide benefit tour—Lil Wyte, Frayser Boy, T-Pain, Lil Wayne, Tech N9ne, The Roots, Mr. Hyde, Project: Deadman, Bizarre, Dilated Peoples, and Philadelphia’s own JediMind Tricks. The girls preferred hip-
pop
, rather than hip-hop, but they tagged along anyway because it was an excuse for all of them to hang out together and get out of East Petersburg for a night. They were in Philadelphia, after all. It sure beat the hell out of hanging around Gargano’s

Pizzeria for another evening.

They’d been friends since elementary school—long before they’d actually started dating and paired off into couples. Now things were changing. Graduation was over. College loomed. Adulthood. The real world. Although none of them verbalized it, they all knew that this could very well be the last time they’d all be together like this. Most of them were going their own way in a few months, so they were determined to live it up. One last great time before life intruded.

When the concert was over, all six of them had shuffled out to the parking lot with the rest of the crowd. They piled into the old station wagon Tyler had inherited from his brother Dustin, after Dustin went off to Afghanistan. Dustin had always kept the car running like it was fresh off the factory floor. The engine had been tuned to purr when it idled and to roar when Dustin stomped the accelerator. When he’d first gotten the car, Tyler had made an effort to keep it in perfect shape. But eventually, he ran it ragged, just like everything else in his life. When Kerri asked him about it, Tyler’s excuse was that he wasn’t as good with his hands as his brother had been. He’d never been mechanically inclined. Tyler’s talents lay elsewhere—scoring a bag of weed or six third-row tickets for this concert. He liked to call these things “acquisitions.” He was the closest thing to street smart they had in East Petersburg, and he knew it, too.

Half-deaf from the concert, and adrenalized by the late hour, they’d driven out of the parking lot with the windows down, laughing and shouting at one another. It was summer and they were young. Happy. Immortal. And all the bad things out there in the world?

Those bad things were supposed to happen to someone else.

Until they’d happened to them.

It started when, five minutes after pulling out of the lot, Tyler decided to visit a friend of his on the other side of the river, in Camden. No one in their right mind went into Camden, New Jersey, after dark, but Tyler swore that he knew what he was doing. He’d promised them this friend had great weed. Tyler navigated the station wagon through a bewildering maze of city streets, insisting that he knew where he was going. They drove past block upon block of row homes, seeing only the occasional business—a mattress store, a Laundromat, a pizza shop and a bail bondsman. A group of men were hanging out on the stoop of one of the row homes, watching as they drove by. Their intense stares made Kerri nervous. Despite his insistence that he knew where he was going,

Tyler got flustered when the road he needed was under construction and closed. Orange-and-white oil drums topped with flashing yellow lights barred their passage.

“What the fuck is this all about?” Frowning, Tyler pointed at the large, dented ROAD CLOSED sign.

“It’s blocked off,” Brett told him.

“I know it’s blocked off, shithead. Thanks for your help.”

“You need a GPS,” Stephanie said. “My parents bought me one for my birthday last year. I
never
get lost.”

Tyler’s frown deepened. “Your parents buy you everything, princess.”

Stephanie shrugged. “Well, if you had a GPS, we wouldn’t be sitting here now would we?”

“I’m surprised you know how to program the fucking thing.”

“Hey.” Brett spoke up, trying to defend his girlfriend. His tone was nervous. “Chill out, Tyler.”

“There’s no need for that. Knock it off or I’ll …” Brett’s voice trailed off. He squirmed uncomfortably.

“You’ll what?” Tyler teased. “Beat me at chess? Sit back and shut the fuck up, pussy.”

Sensing his growing agitation, Kerri tried to calm her boyfriend. “Tyler, why don’t we just turn around and go home. We don’t need weed that bad.”

Tyler’s handsome features pinched together for a second, and she saw him trying to control his temper. In private, when it was just the two of them, Tyler could be really sweet, but he also had anger issues. When his temper got the better of him, things usually ended badly. He’d never hit her or anything like that. But he said things—words more hurtful than any blow.

He shook his head. “It’s all good. I can get around this. I just have to go down one block and then backtrack.”

Ultimately, the detour took them in the opposite direction of the Ben Franklin Bridge. Tyler’s calm demeanor cracked when they found themselves driving on a meandering stretch of the Lower Carlysle Thruway, winding through some of the worst parts of Philadelphia. Hookers roamed the streets, looking hollow and emaciated. A woman with haunted eyes and fire-engine red hair gave them the finger as they drove by. A huge herpes sore dotted one corner of her mouth. Brett waved at her. Steph nudged him in the ribs with her elbow.

The road was rutted and cracked. The car bounced over a gaping pothole, thumping and rattling in ways that would have surely sent Dustin after his little brother with an assault rifle. Something scraped along the underside of the vehicle. Brett gasped from the backseat, and the others cringed at the sound as the car continued to scrape along.

“Fuck me,” Tyler whispered under his breath.

He smiled, but there was no humor in the expression. They’d continued down the street, slowing to a crawl. The landscape grew steadily bleaker. They drove past a cluster of seedy-looking bars, patrons lounging outside, bathed in garish neon. Then the bars gave way to pawn shops and liquor stores and rundown, shoebox housing.

“Jesus,” Brett gasped. “Look at these houses. How can anybody live like this?”

They’d stopped at a red light. Thumping bass from the car next to them rattled their windows. A large group of black youths stood on the street corner, peering in at them. When one of the teens sidled up to the station wagon and gestured, Tyler gunned it, racing through the light. A car horn blared behind them.

Tyler ignored her request, but everyone else rolled their windows up. After a moment, he begrudgingly did the same.

“Where the fuck is the turn?”

Damned and Desperate by Tara West
Drifting House by Krys Lee
A Fool's Gold Christmas by Susan Mallery
Over the Farmer's Gate by Roger Evans
Ghouls Just Haunt to Have Fun by Victoria Laurie
Blaze by Joan Swan
The Ronin and the Green Maiden by Travis Heermann
Full Circle by Danielle Steel
Death of a Liar by M. C. Beaton
The Halloween Hoax by Carolyn Keene
Our partner