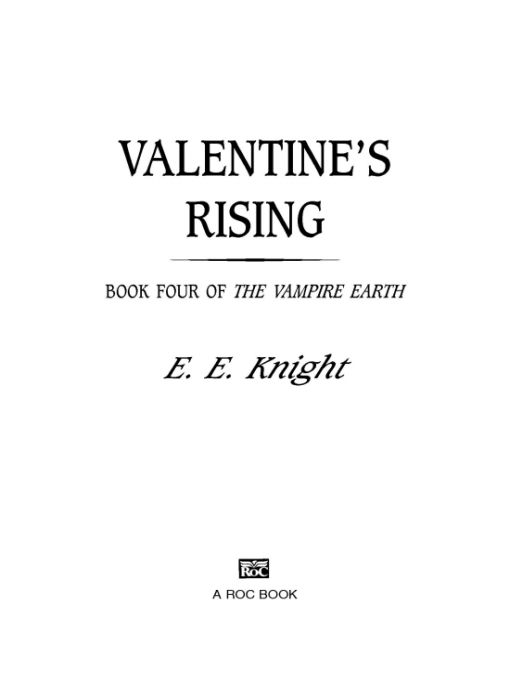 Table of Contents
Title Page
Copyright Page
Dedication
Epigraph
Â
Chapter One
Chapter Two
Chapter Three
Chapter Four
Chapter Five
Chapter Six
Chapter Seven
Chapter Eight
Chapter Nine
Chapter Ten
Chapter Eleven
Â
Teaser chapter
“I have no doubt that E. E. Knight is going to be a household name in the genre.”
âSilver Oak Book Reviews
Praise for the Vampire Earth novels
Tale of the Thunderbolt
“An entertaining romp rife with plausible characters; powerful, frightening villains; suspense; romance; and monsters. Everything good fantasy and science fiction should have.”
âSFF World
Â
Choice of the Cat
“I dare you to try to stop reading this exciting tale.”
âSF Reviews
Â
“Strong characterization, excellent pacing, [and] believable depth in world-building . . . an entertaining story.”
âSFF World
Â
“An impressive follow-up sure to delight all fans of dark fantasy and hair-raising heroic adventure . . . unique and wonderfully entertaining.”
âRambles
Â
“A sequel that surpasses the original.”
âSF Reader
Â
Way of the Wolf
Â
“A winner. If you're going to read only one more postapocalyptic novel, make it this one.”
âFred Saberhagen, author of the Berserker series
Â
“Powerful. . . . Readers will want to finish the tale in one sitting because it is so enthralling.”
âMidwest Book Review
Â
“If
The Red Badge of Courage
had been written by H. P. Love-craft.”
âPaul Witcover, author of
Waking Beauty
Â
“Knight's book of dark wonders is a marvelâsimultaneously hip and classy, pulpy and profound. Evocative of Richard Matheson as well as Howard Hawks, Knight's terrifying future world is an epic canvas on which he paints a tale of human courage, heroism, and, yes, even love.”
âJay Bonansinga, author of
The Killer's Game
Â
“This is one of the best books I've read in years. If you like action books (or horror or military or suspense . . .) just buy it.”
âScott Sigler, author of
Earthcore
Â
“E. E. Knight has managed to create a compelling new world out of the ruins of our existing one. It's a major undertaking for a new author. . . . He does it with style and grace, and I would highly recommend checking out the book as soon as you can.”
âCreature Corner
Â
“Valentine is a complex and interesting character, mixing innocence with a coldhearted willingness to kill. . . . Knight brought the setting to vivid life. . . . His world is well constructed and holds together in a believable fashion . . . compelling.”
âSF Reader 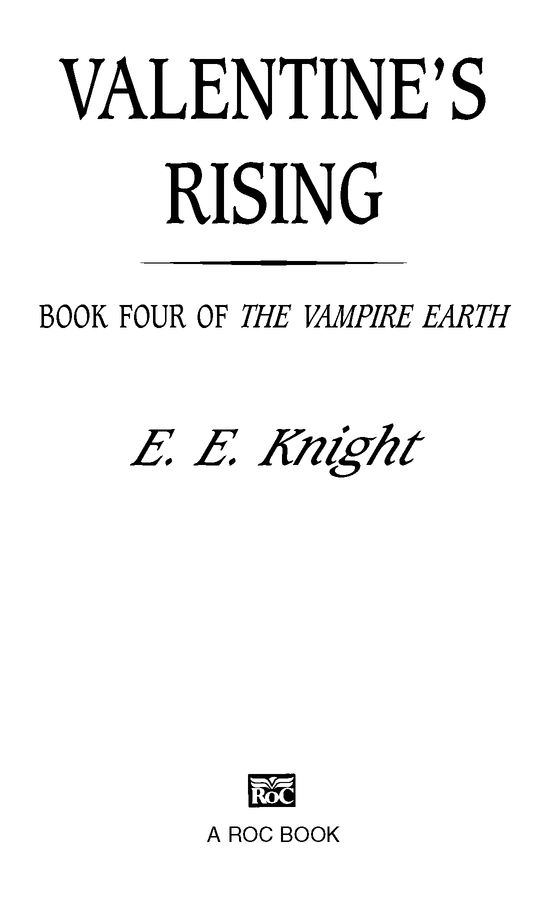 REGISTERED TRADEMARKâMARCA REGISTRADA
Â
Without limiting the rights under copyright reserved above, no part of this publication may be reproduced, stored in or introduced into a retrieval system, or transmitted, in any form, or by any means (electronic, mechanical, photocopying, recording, or otherwise), without the prior written permission of both the copyright owner and the above publisher of this book.
Â
PUBLISHER'S NOTE
This is a work of fiction. Names, characters, places, and incidents either are the product of the author's imagination or are used fictitiously, and any resemblance to actual persons, living or dead, business establishments, events, or locales is entirely coincidental.
The publisher does not have any control over and does not assume any responsibility for author or third-party Web sites or their content.
Â
Â
The scanning, uploading, and distribution of this book via the Internet or via any other means without the permission of the publisher is illegal and punishable by law. Please purchase only authorized electronic editions, and do not participate in or encourage electronic piracy of copyrighted materials. Your support of the author's rights is appreciated.

To those in uniform, past and present. Thank you.
All along that singing river
A black mass of men was seen
And above their shining weapons
Hung their own beloved green
Death to every foe and traitor!
Whistle loud the marching tune
And Hurrah! me boys for freedom
'Tis the rising of the moon
Â
The rising of the moon
The rising of the moon
And Hurrah! me boys for freedom
'Tis the rising of the moon
Â
Well they fought for dear old Ireland
And full bitter was their fate
What a glorious pride and sorrow
Fills the name of ninety-eight
Yet thank God while hearts are beating fast
In manhood's burning noon
We will follow in their footsteps
By the rising of the moon
Â
â“
The Rising of the Moon” by John Keegan Casey
Chapter One
The Ouachita Forest, Arkansas, December of the forty-eighth year of the Kurian Order: The pines stand, colorless spindles under a winter overcast. The low mountains of the Ouachitas huddle dark all around, just touching the cloud sea. Water beads linger on bough, trunk, leaf and stone as though freshly dropped; the earth beneath the fallen leaves smells like decay. Birds overturn dead leaves and poke about the roots in silence, walking the earth as if too dispirited to fly. Brown ferns lie flat along the streambanks, under patches of frostbitten moss flaking off the rocks like old scabs. Even the wind is listless, seeping rather than blowing through the pines.
Naked outcroppings of stone, etched with lightning strikes of quartz crystal, project every which way from the ground like the work of titans who tried to pull out the mountain by its roots. The strata of the Ouachita slopes are jumbled, pushed up and twisted from a seismic pileup millennia ago. Thanks to the blind runs, box canyons and meandering crest lines of these elderly mountains, the landscape doesn't lend itself to habitation. These hills have been hide-outs of liberty-loving Indians, die-hard Confederates, and law-evading brigandsâthe notorious Younger gang used to hole up here with the James brothers. Between the stands of rock, the ferns' squashed-spider shapes lie in boot tracks and hoofprints forming a trail that suggests a similar hurried flight from authority.
The boot tracks have a source, noisily crunching over the hilltop's still-frozen ground. Six mud-stained figures walk with the oddly stiff motion of men on their last legs, strung out in front of and behind a lone horse pulling an A-frame drag supporting an unconscious man with blood-matted hair. Two dreadlocked men in blue-black uniforms share a blanket as they move, muttering to each other in the patois of the sunny island of Jamaica. Walking alongside the horse is the oldest of the group, a meaty-faced man of six-two, dark brown hair flecked with early gray and a boxer's shovel jaw. His clothing, indeed his whole body, has the look of having just emerged from a threshing machine. An improvised poncho is fixed about his waist with a wide brown belt. Dried blood stains the parts that dirt hasn't touched; bits of rag are knotted around wounds in his left leg and right arm. He moves the horse along with a switch, though the occasional lash does nothing more than send it lurching forward a quick pace and into the man leading it.
The lead shape, seemingly bigger than any two of the others put together, is of another species. So forbidding that one might think he was pried off a cathedral and placed among Arkansas pines as a prank, he moves along leaning toward his right side, one tentpole-length arm supporting his midriff. An even longer gun rides his shoulders, tied there by a bit of leather like an ox's yoke. He has bandages wrapped about the waist, a tight corset of brown-stained cloth that accentuates the width of the meaty, golden-furred shoulders above. The creature's eyes shift, widen, and even go a little wet as he spies a figure far away in the trees, jogging toward the file from ahead.
The young man the apish humanoid sees places his feet deliberately as he trots, for a trail in wet leaves on the hillside could be spotted by experienced eyes as easily as a line of signal flares. He favors his left leg, leading with the right up difficult patches of the hill. His shining black hair and bronze skin mark him as more than a spiritual relative of the Osage who once hunted these hills; he moves like them, flowing from spot to spot with the speed of a summer stream: sometimes fast, sometimes slow, sometimes deceptively still when he stops to examine the ground. He wears a simple black uniform, mud-splotched, set off by a strange bandolier of snakeskin with oversized loops, as if the sash had been designed to carry hand grenades, and carries a rugged submachine gun fed by a drum magazine.
His right cheek is scarred from the outer edge of his eye down. The wound, like a Prussian dueling scar, traces its pale way along the edge of his face, marring an otherwise handsome frame around brown eyes. The wary, intent gaze of a wild animal patiently reads the woods behind when he pauses to rest and lets the column come to a stop at its own pace. . . .