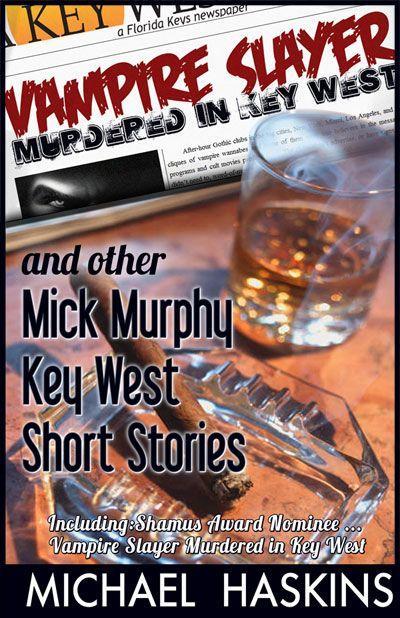 Short stories about Mick Murphy's adventures in Key West, with his usual eclectic cast of friends and enemies. The stories appear in the order they were written and include the Shamus nominated Vampire Slayer Murdered in Key West. There is a footnote after each story, giving a little history of how it was written or some other interesting fact.

Michael Haskins the writer of seven Mick Murphy Mysteries, four of them set in Key West, Florida. He lives and writers in the Florida Keys.

The stories appear in the order they were written.

These short stories are a work of fiction. Names, characters, places and incidents are either the product of the author’s imagination, or, if real, used fictitiously.

No part of this book may be reproduced or transmitted in any form or by an electronic or mechanical means, including photocopying, recording or by any information storage and retrieval system, without the express written permission of the author, except where permitted by law.

Growing up, short stories appeared in all the magazines in my house and I spent hours reading them. As time went on, magazines seemed to lose interest in the short story, or maybe writers lost interest in writing them. Today, many years later, short story anthologies are back and books loaded with stories by some of today’s most popular writers are available with theme backdrops in a variety of cities and countries.

And thanks to Texas Rich for editing.

In memory of Marshal Smith, my friend, supporter and bookseller extraordinaire.

W
hen the curator from the art museum outside of Los Angeles called and said that Joseph Bolter, the curator of a museum in Boston, had recommended he contact me, I asked what paintings had been stolen.

The hesitation in the curator’s voice told me he had a problem, and mentioning Boston added up to art theft. A little less than two years prior to the evening’s call, I had been the intermediary in retrieving stolen art for a Boston museum. The theft wasn’t publicized and I don’t do that sort of thing for a living, but the thieves knew I was in Boston, and I have a reputation for discretion.

Dick Walsh, the curator from Los Angeles, stuttered and finally mumbled, “How do you know a painting has been stolen?”

“I’ve only had one dealing with the museum in Boston,” I said, and left it at that.

There was some heavy breathing on the other end of the phone, maybe he was hyperventilating, and then he said, “A Picasso was stolen this morning.” The words came out coarse and sounded like each one caused pain.

“I like Picasso,” I whistled, and Walsh remained silent. “I don’t know how I can help you.”

My name is Liam Michael Murphy, I live in Key West, and I’m a journalist. While attending Harvard I picked up the nickname Mad Mick Murphy, mostly due to student stunts and somewhat because I’m Irish. The name has stuck.

It was an early winter evening in Key West; tourists filled Mallory Pier hoping to see the green flash as the sun set into the Gulf of Mexico, and Duval Street bars were crowded with sunburned tourists starting the nightly pub-crawl. In Los Angeles, it was late afternoon.

“The painting was on loan from the Boston museum,” he told me, like it explained his call. “We’re aware of how you helped them two years ago and would like you to help us.”

“That whole thing in Boston was a fluke.”

“We realize that,” he continued to mumble, “a plane will pick you up, we will pay for your hotel and $300 per diem.”

“What’s the painting insured for?”

If a private collector had arranged the theft, the thieves would not contact the insurance company. If a collector was not involved, the probabilities were good the thieves would call and try to arrange a ransom deal. The insurance company would be responsible for the $10 million if the painting was not recovered, so paying a ransom and keeping the theft out of the news benefited them. It was also difficult to sell a stolen Picasso on e-Bay.

Small private jets can land at Key West International Airport; they are also comfortable, and I was in Los Angeles a little after midnight.

I read the brief report I received, during the flight. The art theft had happened during operating hours, the report explained. Schoolchildren, on a tour of the museum with their teachers, were horsing around on the second floor, and after touching some frames, an alarm went off. The alarm sent the museum’s entire second-floor security staff to that room. The head of security estimated that in the ten minutes his crew was in the room with the children someone stole the Picasso by cutting it out of its frame. As soon as the first alarm went off all exits of the museum locked automatically, so security assumed the painting was still within the museum. However, a thorough all-day search had not found it.

I had a few hours sleep before arriving at the museum’s security room at daybreak. The room, hidden in the museum’s first basement, had two more levels below it for storage. It was a small and dark room with outdated security camera monitors stacked around a large desk. It seemed to be an odd arrangement for an art museum. Six men monitored the monitors.

Dick Walsh, a tall, slim nervous man introduced me to the head of security, Bob Pierce, and then went to his office to wait for the thieves to call. Pierce was in his early fifties, had a military haircut and physique.

He glanced briefly at the papers and nodded. “Do you want to see the security tapes we have?”

I followed him into his cramped office where there were more monitors. He pushed a tape into one and pointed to a chair. I sat down.

“Let me tell you what you’re going to see, so you’ll understand it.” He sat down at his desk. “A man in an old trench coat and hat will cross in front of the camera. You’ll see him turn the Picasso painting, cut it from its frame and then walk out of view, rolling it up. He’s not recognizable and we can’t tell his age. We know he’s white. We don’t have the equipment to enhance the images, and our surveillance equipment is antiquated.”

“I noticed.” I watched the monitor as the thief walked into the empty room and stole the painting. He never looked at the camera.

“Did he show up on any other surveillance tapes?”

“There are short glimpses of him in the same room with the kids, but he did his best to say out of the camera’s angle,” Pierce said, sucking on an unlit cigarette. “The kids told us he teased them into touching and lifting one of the large frames, and that’s what set off the alarm.”

“Tell me, Murphy, was it prearranged for the kids to be there, or was it a crime of opportunity?” The voice came from the doorway.

I turned and recognized Howard Bolter, an insurance investigator from Boston. He filled the doorframe.

“Someone from the school would have to be involved, maybe even the teacher,” I answered. “Was the visit publicized?”

“Yes.” Bolter walked into the room. “What do you think, Mick?”

“The trench coat and hat was a disguise, so it wasn’t a crime of opportunity,” I said, running the grainy image through my mind. “If the teacher wasn’t involved, then the thief might have known they were coming because he’s on the museum’s staff.”

“Not bad for a Harvard grad,” Bolter laughed. “Huh, Bob?”

“If you say so,” Pierce said without enthusiasm.

“Bob doesn’t think we should bring you in, Mick.” Bolter explained his coolness toward me.

“Nothing personal,” Pierce mumbled. “I just don’t see how a journalist from Key West is going to do us any good. I don’t think the painting ever left the museum, and I know we’ll find it.”

“But you won’t get a million dollar reward, will you?” Bolter smiled. “And you don’t hang out with thieves and liars, Mick does. The idea of the reward gives Mick incentive.”

“There’s that,” I said, trying to sound sincere.

We took an elevator up to the curator’s office on the first floor. Pierce hadn’t received any ransom calls, so he grudgingly walked with the three of us to the second floor room where the Picasso had been displayed.

“Police?” I asked as we walked the stairs.

Both Pierce and Bolter shook their heads no.

“We probably won’t get it back,” Bolter said.

The museum was scheduled to open in four hours, but for now, it was quiet, though there were a lot of people milling around. The room where the Picasso had been had high ceilings and the off-white walls held a variety of art in different sizes. I am not someone who frequents museums, so I wasn’t sure about the art hanging there. Where I hang out frames are screwed to the walls. The floor was carpeted, and uncomfortable chrome and leather bench-like seats were placed in the center so patrons could sit and stare at a painting.

I walked around the room as if I knew what I was looking for. I stopped in front of the empty frame.

“Is it worth finger printing?” I asked.

Bolter laughed. “I had some people come to do that a little while ago. We don’t expect to find any.”

“Why don’t you suggest they screw the frames down?” I whispered to Bolter.

“Because they don’t serve booze in this place, Murphy,” he chortled. “Do your job.”

“Why the dead spots for the cameras?” I asked, as I looked toward the camera over the door. The system had to be more than ten years old.

“Because it would cost too much to do it right and upgrade,” Pierce snorted.

“We have a board of directors to report to,” Walsh said, his tone firmer than before. “Mr. Pierce would have the museum wrapped in barb wire if we let him. Updating the equipment was too costly.”

“It’s going to cost someone now.” I looked at Bolter.

“We were not aware of the dead space,” Bolter said guardedly. “The painting is owned by a private party and was on loan to the museum in Boston. The owner agreed to the secondary loan to this museum, but there was a contract involved and this museum’s insurance company has that responsibility. I guess we assumed the security was adequate.”

“We were assured there were surveillance cameras,” Bolter mumbled.

“And there are,” Walsh answered tensely. “No one questioned our equipment.”

“We should have been more thorough,” Bolter said. “But this museum has a good reputation.”

“I’m looking out for the welfare of the Boston museum.”

Bolter gave me a dirty look, but didn’t say anything.

We followed Walsh to the room where the schoolchildren had set off the alarm. It was two doorways down from where the Picasso hung. I looked around. The size was the same as the other room, the layout the same, even the carpeting and furniture. What was different was the size of the paintings.