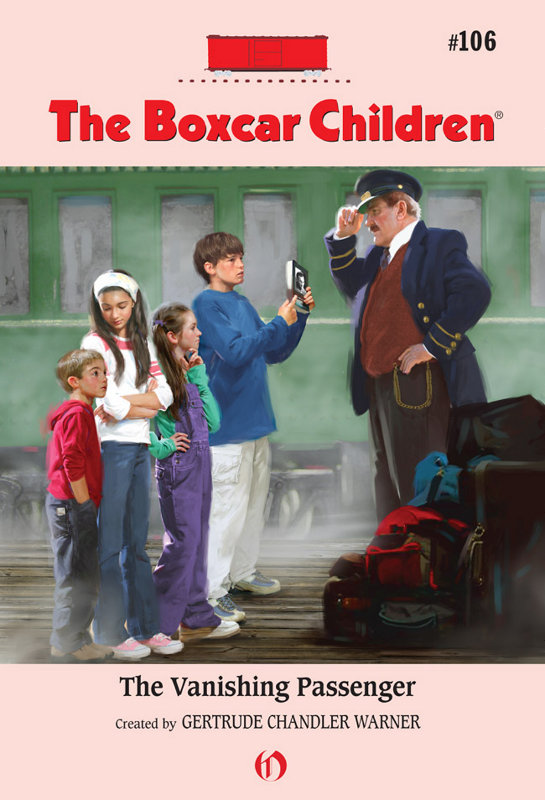 1. Not Everyone Is a Finch Fan

4. A Quiet Place to Read

6. A Smell to Remember

8. The Little Engine That Couldn’t

10. Some Explaining to Do

CHAPTER 1
Not Everyone Is a Finch Fan

Six-year-old Benny Alden lay on the floor of the Greenfield Public Library. He was coloring a huge poster.

“How’s it coming, Benny?” asked Violet, his ten-year-old sister. She was holding a poster of her own, which she’d just finished. She gently waved it so the ink would dry.

He leaned back so Violet could have a look. The words were big and bold, printed clearly in black on the heavy white paper:

AT THE GREENFIELD LIBRARY

Benny’s sister, Jessie, who was twelve, had actually written the words. Benny was still learning to read and write. But he did add little drawings of Mr. Finch’s books.

The Aldens loved Gilbert Finch’s books. Each one was set in some faraway place, and the main characters were always children who found themselves in exciting situations.

“It looks great, Benny,” Violet said. “I like the little books you drew around the outside. I’ll bet Mr. Finch will like it, too.”

“I still can’t believe he’s coming here,” said Jessie. She was coloring another poster. “He has so many fans, and yet he’s coming to
our
library.” 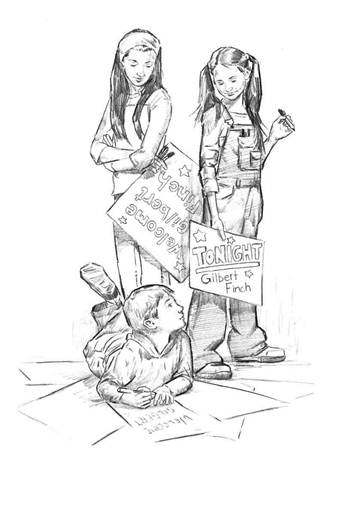 “And all we had to do was ask him,” added Henry. At fourteen, he was the oldest of the children. “Violet’s idea to simply write him a letter was great.”

Violet smiled. “The worst he could do was say ‘no.’”

But Finch hadn’t said no—he’d written back to the Aldens right away and said he’d be delighted to visit their library. His latest book,
The Lost Chamber of Gold,
was an exciting story set in the jungles of Brazil. Mr. Finch had been visiting other libraries and bookstores all over the country.

“A lot of people will be here to see him tomorrow night,” Jessie pointed out. “Ms. Connally said as many as a hundred.”

“Maybe even more,” said Ms. Connally, who walked into the room at that moment. She was the head librarian and knew the Aldens well. “I just got off the phone with Ms. Pollak, over at the elementary school. She’s asking everyone in her class to come.”

Ms. Connally walked around to see everyone’s posters. “They look very nice,” she said. “Where will you put them?”

“All over,” said Violet. “Anywhere they’ll be seen by a lot of people. The supermarket, the bank …”

“And the train station,” Benny said. “Don’t forget that!”

The Alden children were very familiar with trains. After their parents died, they learned that their grandfather was coming to get them. They heard he was mean, so they tried to hide from him. They picked an abandoned boxcar as their hiding place. When Grandfather finally found them, they soon realized he wasn’t mean at all. The children went back to Greenfield with him. Then Grandfather arranged to have their boxcar brought along, too! It was set up in the backyard, where they could play in it anytime they wished.

When Benny mentioned the station, it reminded Jessie of something very important. She checked her watch and said, “We’d better get over there soon. Mr. Finch will be arriving in less than an hour.”

“Oh, that’s right,” Violet added. “He called here earlier to let us know he was getting on the train.”

Mr. Finch had agreed to come to Greenfield the day before his appearance so he could have dinner with the Alden children and their grandfather. He’d also said something about wanting to see a friend, but he didn’t say who it was.

“Good luck!” Ms. Connally said as she left the room.

The Aldens finished the posters and bundled them together in a neat pile. They would hang them around town as they walked to the station.

As they headed for the door, they noticed someone standing by a display of Gilbert Finch’s books. He was an older man, with unruly hair. He wore a pair of small, round glasses, and his shirt wasn’t tucked in.

The children had arranged the book display the night before, and they were very proud of it.

This strange man, however, didn’t seem very impressed. Instead, he was moving the books around so that they were harder to see. He turned them so only the backs were showing! And then he took some other books off the shelf and put them up in front of Finch’s books. While he was doing this, he kept peering around the corner of the nearest bookshelf. It seemed as though he was worried about Ms. Connally catching him!

When the man was done ruining the display, he walked away quietly.

“What was that all about?” Henry said.

“We should go fix it,” Violet suggested.

“Yeah!” Benny agreed in a huff.

They walked over and put everything right again. When they were finished, Jessie said, “We should tell Ms. Connally when we get back.”

“But for now,” Henry said, “let’s get over to the train station. We don’t want to be late.”

As they reached the front door, they saw the strange man again. He was at the front desk, speaking with Ms. Connally. The children couldn’t help overhearing their conversation.

“Why can’t I speak at the library, too?” he grumbled. “My books are just as good!”

“I know they are, Mr. Van Buren,” Ms. Connally said in a calm, low voice. The children got the impression she was hoping the man would lower his voice.

“You’re having Gilbert Finch come all the way down from Clairmont. That’s more than two hundred miles from here. I live less than an hour away! I could get as many people in here as
he
could,” the man went on. He was also making sharp gestures with his hands, as if his loud voice wasn’t enough. “All I ever hear about is Gilbert Finch this, and Gilbert Finch that.” He tapped himself on the chest. “What about Daniel Van Buren?”

Ms. Connally took a deep breath. “Mr. Van Buren,” she began, “we have an opening in our schedule next month, the night of Sunday, the twenty-third of—”

“What good will that do?” he snapped. “I’ll be busy then! I’m here, now, in town on business. It wouldn’t be too much to squeeze me in tomorrow night, would it?”

“Ah, forget it,” he said with a wave of his hand, and turned away. He stalked past the Aldens without noticing them and pushed his way out the front door.

“That man at the library had to be the rudest person I ever saw,” Jessie said as they taped the last poster to a pole at the Greenfield train station.

“He certainly was,” Henry agreed.

Jessie checked her watch again. “Anyway, Mr. Finch’s train should be arriving any minute. Are we ready?”

At that moment, far in the distance, came the faint blast of a horn.

They leaned forward to get a good look as it came around the bend. Jessie straightened up and brushed off her clothes. “Okay, everyone get ready …”

After the train came to a complete stop, the doors slid back, and the conductors stepped off. They wore handsome blue uniforms with gold buttons down the front. Then, the passengers began coming out. There were a lot of them. Some were people the Aldens recognized as Greenfield residents. Others were strangers.

The Aldens didn’t know which car Finch was in, so they watched all the doors. Violet noticed a family with a little girl and a little boy get off the train. She could see that the two children were crying. The little boy was rubbing both eyes and pouting. The little girl, with tears streaming down her face, was holding a long leather leash. And their father was carrying what appeared to be a large box with a red blanket over it.

“Hey, look over there,” Violet said to Henry.

A conductor came over and spoke with the family. He was a friendly looking man, with blazing red hair sticking out from under his conductor’s cap. He first talked to the parents, who looked worried. Then he crouched down and tried to cheer up the children. He got two lollipops from inside his jacket. The children took them, but they didn’t stop crying.

“I don’t know,” Violet said. “I can’t hear with so many other people around. There’s too much noise.”

The conductor stood up again and patted the little boy on the back. The father stroked his daughter’s hair and said something to her. Then the conductor led them away.

“Yeah,” Henry agreed. “I hope they’re okay. But has anyone seen Mr. Finch yet?” He tried to see over the crowd, but he wasn’t quite tall enough.

“No,” Jessie said, looking around carefully. “No sign of him.”

The children moved closer to the train so they could get a better view of all the doors. A moment passed, then another. The crowd started to thin out. Passengers found their friends and families and began leaving the station. Suitcases were wheeled off, and the noise died down. Then the children were alone.

Everyone had now gotten off the train— and Gilbert Finch was nowhere in sight.

Jessie said, “Are you sure you didn’t see him?”

“I didn’t,” replied Henry. “And I’m certain I checked everyone.” 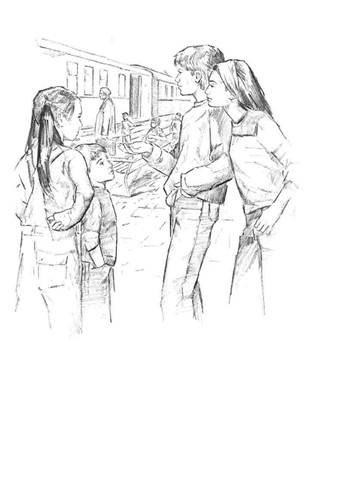 “Maybe he didn’t realize this was his stop and forgot to get off,” Benny suggested.

“No,” Jessie said, “Greenfield is the last stop for this train until tomorrow, when it goes back up north. There are no more stops. So even if he forgot, he’d still have to get off here.”

Henry took a piece of paper from his pocket and unfolded it. He’d written down all the information about Finch’s arrival.

“Let’s see … ten-thirty in the morning, arriving on Saturday, on train number sixteen.” They checked up and down the cars. Sure enough, right on the side of the engine, “16” was painted in big white numerals. “This is the right one,” said Henry.

“Then where is he?” Violet wondered.

They spotted the red-haired conductor walking down the platform counting a stack of tickets.

“He might know,” Henry said, and they jogged over to him. “Excuse me, sir?”