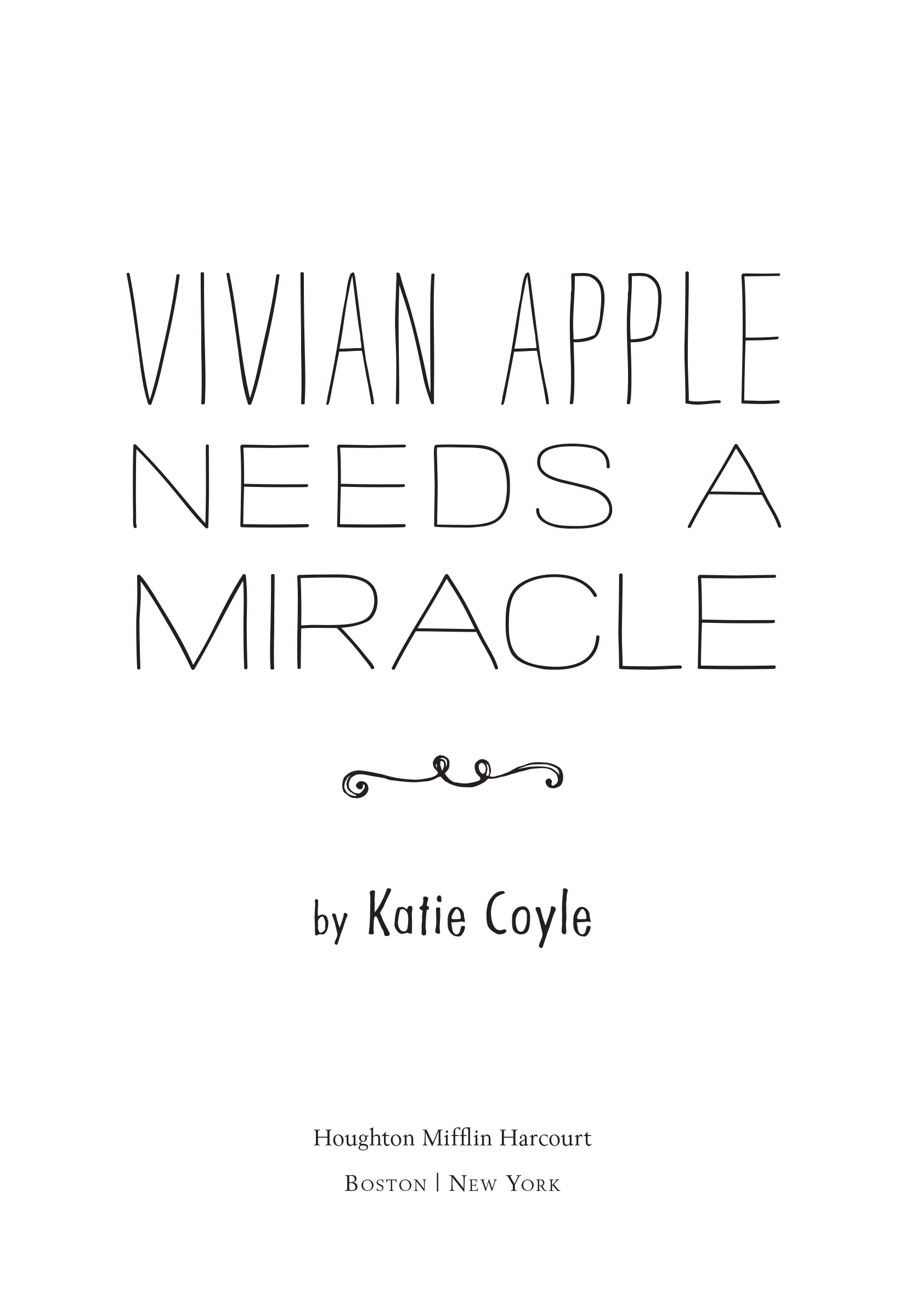 Sequel to: Vivian Apple at the end of the world.

Summary: The predicted Rapture was faked by Pastor Frick's Church of America and 3,000 Believers are now missing or dead. Seventeen-year-old Vivian Apple and her best friend, Harpreet, are revolutionaries, determined to expose the Church's diabolical power grab .Â .Â . and to locate Viv's missing heartthrob, Peter Ivey. âProvided by publisher

And thus I, the Prophet Beaton Frick, speak to the depraved among you, those evil multitudes whom God will forsake when He brings his chosen Americans into heavenâI address the loose women, sodomites, criminal doctors, malicious socialists, and you who do not strive with all your might to condemn them:

Thou canst be ransomed from thy wicked ways; thou can embrace thy Savior as thy Founding Fathers would have wanted. Never forget this: the island of heaven lies across a deep ocean, but the boat to heaven makes more than one trip.

But fail Him a second time, and you deny yourself the eternal splendor of His kingdomâyou condemn yourself to witnessing the apocalypse. You will stand on this earth as it tumbles helplessly into oblivion, and you will hardly notice the planet's dying gasps, because your body will be set upon by beasts of all shapes and sizes. Hellhounds will tear the flesh from your limbs with teeth sharp as razors; vultures will pluck out your eyes should you be fool enough to open them; locusts will fill your every orifice, and you shall feel their dreadful hungry buzzing inside yourself; and you shall know only regret for every heedless moment of earthly pleasure.

In these moments, your painful last, you will try to believe in such a thing as a Savior. But do not let your desperation fool you into clinging to such a story.

For you, there is no such thing.

“It was right here,” Harp says.

We're standing a couple of blocks uphill from my half sister Winnie's apartment in San Francisco, staring at an empty space of curb. A space with no car parked in it. It's early afternoon, and the sky is an unsettling red, like the inside of a blood orange. Harp steps off the sidewalk, moving her hands carefully around the general area where the roof of the car should be. Like it's simply invisible. Like it's still a tangible object in front of us.

“Viv.” My best friend turns to me. “I swearâthis is where I left it.”

A year ago, before Harp and I were friends, when we were just girls who lived in the same neighborhood, one of us timid and aggressively well-behaved (me), the other a whirling dervish of schemes and creative combinations of expletives (her), I might have suspected Harp to be playing an unnecessarily cruel prank on me. But we're coming off the longest night of our lives. We haven't showered, we're tired and frightened, and anyway, Harp has a wild look in her eye, so sharp I can't look directly at it.

“Maybe it's another block up.” I scan the stretch of road leading up the hill, looking for the little black sedan that has carried us so far. If I believed in some kind of god right now, I'd pray for Harp to be mistaken. “All these buildings look the same to me.”

Harp shakes her head and points to the house behind me. There's a handmade sign propped up in the first-floor window:
FRICK IS A PRICK
.

“I remember seeing that when I got out of the car,” she says. “I laughed for a solid five minutes. Why did we never think of it before? The rhyme. So simple, so powerful.”

I try to stay calm. But the car is all we have. With it, we're revolutionaries. If it were here, we'd drive back over the Golden Gate Bridge into the forests of Point Reyes, where Prophet Beaton Frick's secret Church of America compound lies, to find two things: (1) Peter Ivey, the bluest-eyed boy I've ever met, whom we left behind when we escaped; and (2) evidence of the thing we now know to be true: there was no Rapture. The world is not ending, at least not in September, as predicted. The disappearances, the fear and panic, the families torn apartâall of it was engineered by the Church of America Corporation. Because they could do it. Because they could make money off it. Once we had evidence, we'd expose them. And then? There'd be no Church. My life wouldn't go back to normalâit's changed too muchâbut it isn't hard to believe the lives of others would. With the car, we are the most dangerous teenage girls in America.

But the car's not here. If we've lost it, we've lost everything: suitcases, clothes, most of our money, my diary, Harp's Xanax. My only pictures of my parentsâI want them badly now; I want the picture of my dad. It's taken three thousand miles to get to this point, and along the way I've lost everything I've ever owned, and most of the people I've loved. The adrenaline I've been running on since last night fades, and with it, the pain in my handâthe hand I might've broken on the face of Frickâthrobs harder. I feel the pinprick of a headache forming between my eyebrows.

“You didn't park here,” I tell Harp. “You parked somewhere else. You saw the sign while you were walking.”

Harp looks confused. “Are you .Â .Â . trying to hypnotize me?”

She nods uncertainly, and the two of us spring back in the direction of Winnie's apartment. Harp chews the inside of her cheek. I try to calm myself with rationalityâwhat are the odds our car could have been stolen? What are the odds that since this time yesterday, I could have learned the truth about the Rapture, confirmed that my parents were dead, abandoned in the woods the closest thing I've ever had to a boyfriend, learned that actually my mother is
not
dead and has just been chilling in the Bay Area with the half sister I only recently found out about, decided to leave said alive mother in favor of taking down the Church of America alongside my equally pissed and confused best friend,
and
had my car stolen? What kind of vengeful Old Testament shit is this?

Harp is several paces ahead, but she stops to gape at me. I don't understand why until I hear myselfâI'm rooted where I stand, laughing in a gasping, hysterical way, tears streaming down my face. I taste the salt in them. It's not funny, the way Harp looks at me, but for some reason that makes me laugh harder. She takes a tentative step toward me.

“Oh shit, dude,” she whispers. “Is this it? Have you finally gone bonkers on me?”

I shake my head. I can't breathe. I want to say,
My dad.
I want to say,
Peter.
But I can't calm down, and if I say their names, it will only get worse. Harp's expression softens, and I can't look at her, because I know she understands. If Harp understands, it's realâI'm not imagining this painâand if it's real, I'm never going to stop feeling this way. I'm going to hurt this much forever. I tip my head back. I start to feel dizzy, like I've taken a half step outside my body. I have a brief, delirious moment of understanding: This is how I die. Not proudly, not fighting for the things I believe in, but of a panic attack in an unfamiliar city while Harp looks on helplessly.

“I'm really, really sorry about this,” I hear her say from somewhere far away.

Thenâscreaming pain. Everything goes white. I open my eyes. I'm on my knees on the sidewalk, and Harp has my injured hand in hers. She barely touches it now, but I know a second ago she squeezed it. She has a fierce look in her eyes, like she's ready to do it again.

Harp leans down and hugs me. Even in my post-hysterics state, I'm surprised and weirdly touched by her willingness to publicly display affection for me.

“I know how it feels, Viv.” Her voice is rough in my ear, and I hold tighter to her. It's only been a few months since Harp's brother, Raj, was murdered by Believers, and if Harp's Raptured parents escaped the fate of my father, we have no idea where they might be. “If we're going to survive it, we have to feel it. Even when we think it'll wreck us. We'll lean on each other. You won't let it wreck me and I won't let it wreck you. I'll be right here, and I'll pull you out of it when you need to be pulled out. Okay?”

I nod. My eyes still stream tears, but I can breathe easier. “Harp?”

“Next time, please don't literally pull me out by my broken fucking hand, okay?”

Harp pulls back so I can see her grin. “No guarantees, Apple. When I have to pull you out, I'm just going to grab whatever's closest.”

The park across from Winnie's apartment is sloping and green; it spans three city blocks. Harp and I climb to its topmost point, where a bench faces the wide expanse of grass. Beyond are rooftops and, in the foggy distance, the spires of the city. We take a moment to breathe. The car is gone. We got tricked somehow, driving through San Francisco this morningâeverything was so vibrant, so unlike the huge swaths of Church-dominated country we'd been traveling through. We convinced ourselves we were safe. But of course even a city apparently free of the Church of America contains its own dangers: flaky mothers, startling tidal waves of grief, andâhidden in plain sightâyour average everyday run-of-the-mill car thieves.

I tip back my head. It looks like sunset, but I don't think it can be that late. We have no way of knowing the exact time, though. We've been relying on the car's clock and Peter's phone, which was still in his pocket when we left him.

“I have no idea. Pollution, maybe? It doesn't look natural. Like you said before”âI remember what Harp told me, not an hour agoâ“the apocalypse is coming. Maybe not anytime soon, but it's definitely coming.”

We sit that way a while, staring up, trying not to feel discouraged by the magnitude of the task ahead of us. Afternoon fades into evening, and even as the crimson sky looms more ominously overhead, a powerful, winter-cold wind bears down on us. Still dressed for summer, Harp and I get up to walk and warm ourselves.

“On the bright side,” Harp notes, observing the neighborhood around us, “this seems like a popular city to be homeless in!”

Now that we're actually seeing San Francisco up close, it's less of a Non-Believer utopia than I initially believed. Winnie's neighborhood seems active and trendyâthe blocks Harp and I walk are lined with antique stores, restaurants with puns for names, cheese shops, quaint bakeries. Young men and women bustle past, wearing casual clothes that seem secretly expensive: pre-ripped jeans and thick-framed glasses, tweed blazers. They smoke electronic cigarettes and all seem vaguely tipsy. But the sidewalks are also jammed with a miserable, huddled mass, wrapped in sleeping bags to ward off the evening chill; they're unwashed, unshaven. Adults, children, dogs. There are so manyâit feels like there are two for every hip young San Franciscan we see. It's not like I've never seen homeless people beforeâPittsburgh had them, of course, and New York, tooâbut there's something wrenching about these people. Maybe it's just the disparity between these hungry masses and the happy hipsters we see wandering in and out of upscale taco joints.