Votan and Other Novels (FANTASY MASTERWORKS) 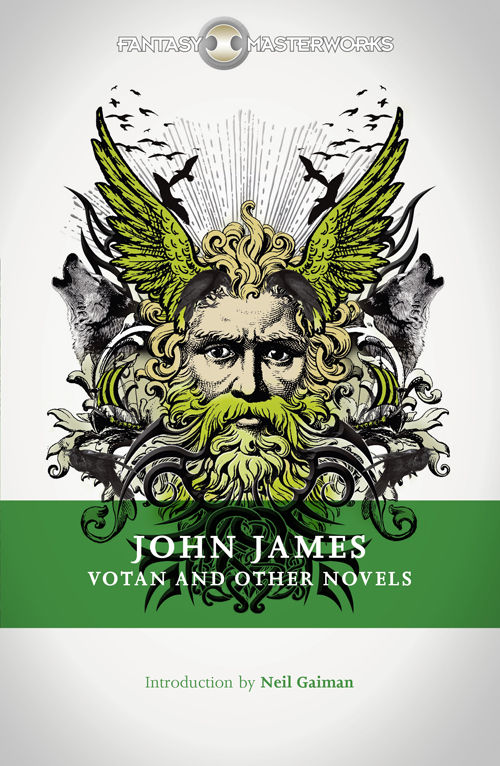 ‘The narrative is terse, the colours vivid, the events barbarously splendid … an imagination as rich as it is vivid’
The Times

‘… excitement, mythology, the splendour and barbarity of the Dark Ages, and vividly imagined adventures’
Northern Echo

Not for All the Gold in Ireland

‘A novel of stark imaginative fire’
The Observer

VOTAN AND OTHER NOVELS

NOT FOR ALL THE GOLD IN IRELAND

In the last years of the twentieth century (as Wells might have put it), Gollancz, Britain’s oldest and most distinguished science fiction imprint, created the SF and Fantasy Masterworks series. Dedicated to re-publishing the English language’s finest works of SF and Fantasy, most of which were languishing out of print at the time, they were — and remain — landmark lists, consummately fulfilling the original mission statement:

Not For All the Gold in Ireland

The hardest part of being a writer, particularly being someone who writes fiction for a living, is that it makes it harder to reread a book you loved. The more you know about the mechanics of fiction, the craft of writing, the way a story is put together, the way words work in sequence to create effects, the harder it is to go back to books that changed you when you were younger. You can see the joins, the rough edges, the clumsy sentences, the paper-thin people. The more you know, the harder it is to appreciate the things that once gave you joy.

But sometimes it’s nothing like that at all. Sometimes you return to a book and find that it’s better than you remembered, better than you had hoped: all the things that you had loved were still there, but that it’s even more packed with things that you appreciate. It’s deeper, cleaner, wiser. The book got better because you know more, have experienced more, encountered more. And when you meet one of those books, it’s a cause, as they used to say on the back of the book jackets, for celebration.

So. Let’s talk about
Votan
.

I’m really late in getting this introduction in, mostly because I’ve been trying to work out how to introduce
Votan
without giving it all away. One does not want to explain the jokes, nor does one feel the need to assign homework before one gives someone a book to read. But it will not hurt if you are familiar with your Norse myths. They will make
Votan
a deeper book, a game of mirrors and reflections and twice-told tales. It might be a good thing to read the
Mabinogion
, and the Irish
Taín
. They will make you smile wider and shake your head in wonder when you read
Not For All The Gold In Ireland
.

So. First of all, you should feel free to skip this introduction and go and read the book. You are holding a beautiful book here, written by a remarkable writer: it contains three novels. Two novels about a Greek Trader called Photinus, who is at least the equal of, and, dare I say it, a finer rogue and tale-spinner than George McDonald Fraser’s Flashman; and a darker retelling, or recreation, of a Welsh epic poem.

I read them as a young man – they were republished as fantasy novels in the early eighties, having been published in the sixties as historical novels. They are not fantasy novels, nor are they strictly historical novels: instead they are novels set in historical periods which people who read fantasy might also appreciate. The Photinus novels (there are only two, with a third novel implied but, alas, never written) are based on mythic and magical stories. (
Men Went to Cattraeth
is bleaker, and based on an old Welsh poem, the
Y Goddodin
.)

Photinus’s mind and his point of view, his voice if you will, is not ours. It is this voice that lingers longest for me. His attitudes and his world are those of the past. Occasionally he commits atrocities. He does not have a twenty-first century head. Many characters in historical novels are us, with our point of view, wearing fancy dress. Votan’s dress is rarely fancy. The conceit that all protagonists in historical novels should share our values, our prejudices and our desires is a fine one (I’ve used it myself), and it is much more difficult and much more of an adventure to create characters who are not us, do not believe what we believe, but see things in a way that is alien to us and to our time.

My own novel
American Gods
has a sequence where the hero, Shadow, spends nine nights on the tree, like Odin, a sacrifice to himself: I did not dare to reread
Votan
in the years running up to writing
American Gods
, then once my book was written, it was the first thing I read for pleasure, like a chocolate I had put away as a boy until the perfect time. I was nervous, and should not have been. Instead I discovered a whole world inside a book I already knew. (And yes, I am sure that Shadow’s tree-hanging owed a huge debt to Votan’s.)

So. Here are the things I will tell you, that might make reading this book more pleasant for you.

Votan
is the story of a man called Photinus – a young man, a Greek trader, a magician, heartless and in it for profit – who seeks amber, and finds wealth and companionship and also finds himself Odin Allfather, the Norse god. The sagas and the tales and the poems that tell us about the Aesir, about Odin and Thor (Donar is Donner is Thunder) all reconfigure here, as if seen through a dark mirror: bleak tales they are, and dark.

Cowboy Up by Vicki Lewis Thompson
La mano del Coyote / La ley de los vigilantes by José Mallorquí
The Light-Bearer's Daughter by O.R. Melling
Night Terrors by Mark Lukens
The Longest Winter by Mary Jane Staples
Filthy Wicked Games by Lili Valente
Vision of Secrets by Entranced Publishing
A Fountain Filled With Blood by Julia Spencer-Fleming
The Woman Who Had Imagination by H.E. Bates
In Search of Love and Beauty by Ruth Prawer Jhabvala
Our partner