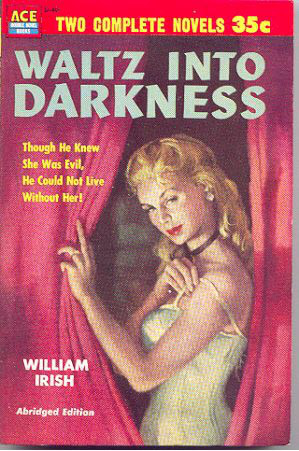 If
one should love you with real love

(Such things have been,

Things
your fair face knows nothing of

CHARACTERS
THAT APPEAR IN THE STORY

Tom,
who works for him

Julia
Russell, the woman who comes from St. Louis to marry him

Commissioner
of Police of New Orleans

Bertha
Russell, sister of the woman who comes to marry Durand

Colonel
Harry Worth, late of the Confederate Army

Bonny,
who was once Julia

CHARACTER
THAT DOES NOT APPEAR IN THE STORY

"Billy,"
a name on a burned scrap of letter, an unseen figure watching a
window, a stealthy knocking at a door.

slowly
draw together. The waltz begins.

The
sun was bright, the sky was blue, the time was May; New Orleans was
heaven, and heaven must have been only another New Orleans, it
couldn't have been any better.

In
his bachelor quarters on St. Charles Street, Louis Durand was getting
dressed. Not for the first time that day, for the sun was already
high and he'd been up and about for hours; but for the great event of
that day. This wasn't just a day, this was the day of all days. A
day that comes just once to a man, and now had come to him. It had
come late, but it had come. It was now. It was today.

He
wasn't young any more. Others didn't tell him this, he told himself
this. He wasn't old, as men go. But for such a thing as this, he
wasn't too young any more. Thirty-seven.

On
the wall there was a calendar, the first four leaves peeled back to
bare the fifth. At top, center, this was inscribed May. Then on
each side of this, in slanted, shadow-casting, heavily curlicued
numerals, the year-date was gratuitously given the beholder: 1880.
Below, within their little boxed squares, the first nineteen numerals
had been stroked off with lead pencil. About the twentieth, this time
in red crayon, a heavy circle, a bull's-eye, had been traced. Around
and around, as though it could not be emphasized enough. And from
there on, the numbers were blank; in the future.

He
had put on the shirt with starched ruffles that Maman Alphonsine had
so lovingly laundered for him, every frill a work of art. It was
fastened at the cuffs with garnet studs backed with silver. In the
flowing ascot tie that spread downward fanwise from his chin was
thrust the customary stickpin that no well-dressed man was ever
without, in this case a crescent of diamond splinters tipped by a
ruby chip at each end.

A
ponderous gold fob hung from his waistcoat pocket on the right side.
Linking this to the adjoining pocket on the left, bulky with a
massive slab of watch, was a chain of thick gold links, conspicuous
across his middle, and meant to be so. For what was a man without a
watch? And what was a watch without there being an indication of one?

His
flowing, generous shirt, above this tightly encompassing waistcoat,
gave him a pouter-pigeon aspect. But there was enough pride in his
chest right now to have done that unaided, anyway.

On
the bureau, before which he stood using his hairbrush, lay a packet
of letters and a daguerreotype.

He
put down his brush, and, pausing for a moment in his preparations,
took them up one by one and hurriedly glanced through each. The first
bore the letter-head: "The Friendly Correspondence Society of
St. Louis, Mo.--an Association for Ladies and Gentlemen of High
Character," and began in a fine masculine hand:

name
and address of one of our members, and if you will address

yourself
to her in person, we feel sure a mutually satisfactory

correspondence
may be engaged upon--

The
next was in an even finer hand, this time feminine: "My dear Mr.
Durand:--" And signed: "Y'rs most sincerely, Miss 3.
Russell."

The
next: "Dear Louis Durand: . . . Your sincere friend, Julia
Russell."

There
was a postscript to this one: "Will Wednesday never come? I
count the hours for the boat to sail !"

He
put them in order again, patted them tenderly, fondly, into symmetry.
He put them into his inside coat pocket, the one that went over his
heart.

He
took up, now, the small stiff-backed daguerreotype and looked at it
long and raptly. The subject was not young. She was not an old woman,
certainly, but she was equally certainly no longer a girl. Her
features were sharply indented with the approaching emphases of
alteration. There was an incisiveness to the mouth that was not yet,
but would be presently, sharpness. There was a keen appearance to the
eyes that heralded the onset of sunken creases and constrictions
about them. Not yet, but presently. The groundwork was being laid.
There was a curvature to the nose that presently would become a hook.
There was a prominence to the chin that presently would become a
jutting-out.

She
was not beautiful. She could be called attractive, for she was
attractive to him, and attractiveness lies in the eyes of the
beholder.

Her
dark hair was gathered at the back of the head in a psycheknot, and a
smattering of it, coaxed the other way, fell over her forehead in a
fringe, as the fashion had been for some considerable time now. So
long a time, in fact, that it was already unnoticeably ceasing to be
the fashion.

The
only article of apparel allowed to be visible by the limitations of
the pose was a black velvet ribbon clasped tightly about her throat,
for immediately below that the portrait ended in smouldering brown
clouds of photographic nebulae.

So
this was the bargain he had made with love, taking what he could get,
in sudden desperate haste, for fear of getting nothing at all, of
having waited too long, after waiting fifteen years, steadfastly
turning his back on it.

That
early love, that first love (that he had sworn would be the last) was
only a shadowy memory now, a half-remembered name from the past.
Marguerite; he could say it and it had no meaning now. As dry and
flat as a flower pressed for years between the pages of a book.

A
name from someone else's past, not even his. For every seven years we
change completely, they say, and there is nothing left of what we
were. And so twice over he had become somebody else since then.

Twice-removed
he was now from the boy of twenty-two--called Louis Durand as he was,
and that their only link--who had knocked upon the house door of his
bride-to-be the night before their wedding, stars in his eyes,
flowers in his hand. To stand there first with his summons
unanswered. And then to see it swing slowly open and two men come
out, bearing something dead on a covered litter.

He
saw the ring on her finger, trailing the ground.

He
didn't cry out. He made no sound. He reached down and placed his
courtship flowers gently on the death-stretcher as it went by. Then
he turned and went away.

Away
from love, for fifteen years.

Marguerite,
a name. That was all he had left.

And
suddenly, one day, the cumulative loneliness of fifteen years, held
back until now, overwhelmed him, all at one time, inundated him, and
he turned this way and that, almost in panic.

Any
love, from anywhere, on any terms. Quick, before it was too late t
Only not to be alone any longer.

If
he'd met someone in a restaurant just then--

Or
even if he'd met someone passing on the street--

You
cannot walk away from love.

His
contemplation ended. The sound of carriage wheels stopping somewhere
just outside caused him to insert the likeness into his money-fold,
and pocket that. He went out to the second-story veranda and looked
down. The sun suddenly whitened his back like flour as he leaned over
the railing, pressing down the smouldering magenta bougainvillea that
feathered its edges.

A
colored man was coming into the inner courtyard or patio-well through
the passageway from the street.

"What
took you so long?" Durand called down to him. "Did you get
my flowers?" The question was wholly rhetorical, for he could
see the cone-shaped parcel, misty pink peering through its
waxwrappings at the top.

"It's
here waiting for you now."

The
Negro shook his head in philosophical good nature. "A man in
love is a man in a hurry."

"Well,
come on up, Tom," was the impatient suggestion. "Don't just
stand down there all day."

Humorous
grin still unbroken, Tom resumed his progress, passed from sight
under the near side of the façade. Several moments later the
outermost door of the apartment opened and he had entered behind the
owner.

The
latter turned, went over to him, seized the bouquet, and pared off
its outer filmy trappings, with more nervous haste than painstaking
care.

"You
going give it to her, or you going tear it to pieces?" the
colored man inquired drily.

"Well,
I have to see, don't I? Do you think she'll like pink roses and sweet
peas, Tom ?" There was a plaintive helplessness to the last part
of the question, as when one grasps at straws.

The Legend of Darklore Manor and Other Tales of Terror by Vargo, Joseph, Iorillo, Joseph
Midnight Falls: A Thrilling Retelling of Cinderella by Jeanette Matern
ManOnFire by Frances Pauli
Seeing Forever by Vanessa Devereaux
In Falling Snow by Mary-Rose MacColl
Love Letters from Ladybug Farm by Donna Ball
Dorothy Must Die: The Other Side of the Rainbow Collection: No Place Like Oz, Dorothy Must Die, The Witch Must Burn, The Wizard Returns, The Wicked Will Rise by Danielle Paige
Dead Connection by Alafair Burke
Triton by Dan Rix
Alien Commander's Bride by Scarlett Grove, Juno Wells
Our partner