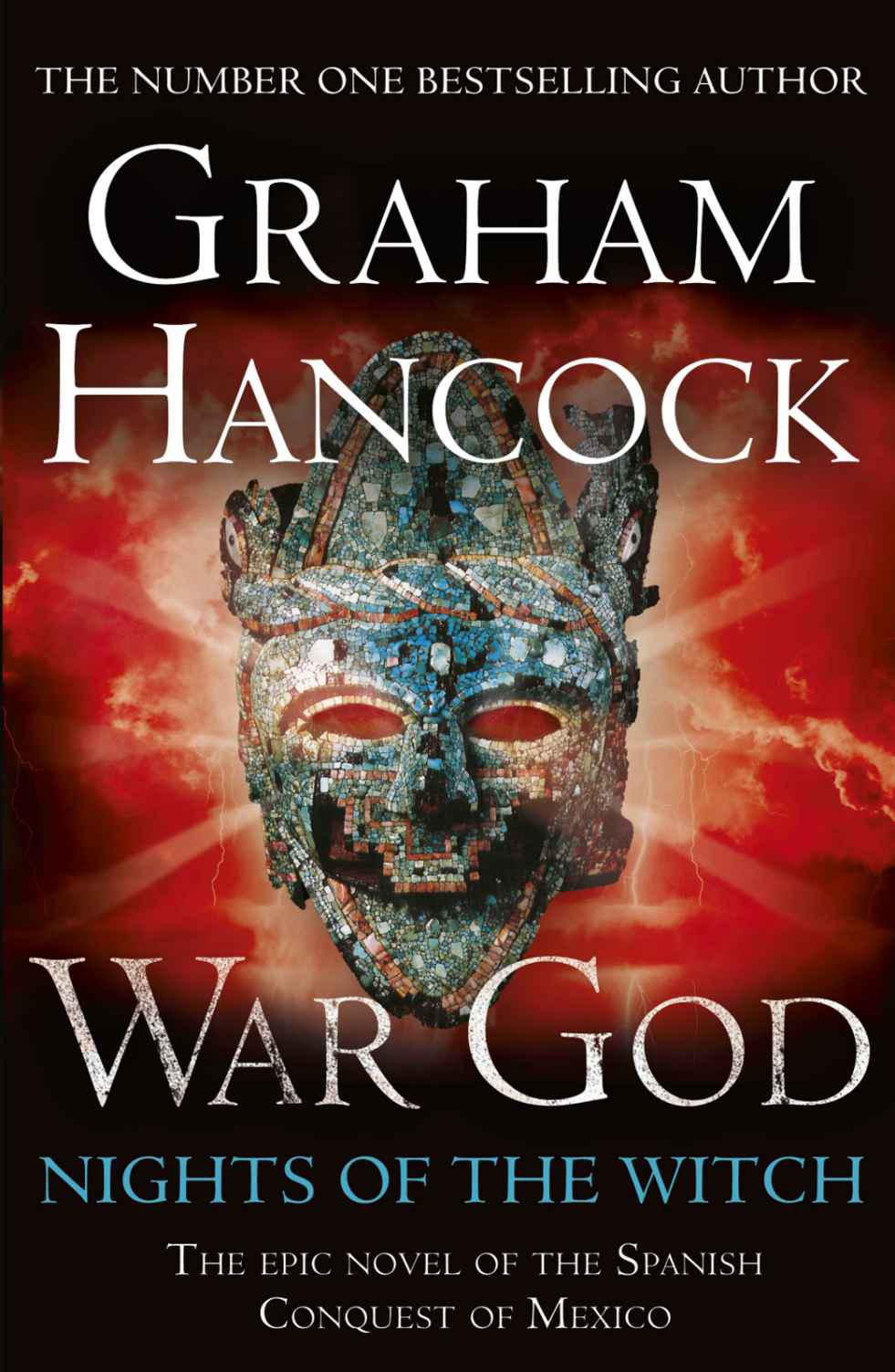 Nights of the Witch

First published in Great Britain in 2013 by Coronet

The right of Graham Hancock to be identified as the Author of the Work has been asserted by him in accordance with the Copyright, Designs and Patents Act 1988.

Nights of the Witch

‘The Mexica … never at any point referred to themselves, or their city states, let alone their empire as “Aztec” … At the time of the Spanish conquest they were [rightly] referred to by the Spanish as “Mexica” – hence the name for modern Mexico.’

‘The Mexica were the cruellest and most devilish people that can be imagined.’

Father Diego Duran,
The History of the Indies of New Spain
(first published 1581)

‘Take care that they do not escape … Feed them well; let them be fat and desirable for sacrifice on the day of the feast of our god. Let our god rejoice in them since they belong to him.’

Priestly regulations, c. 1519, for securing and preparing victims for sacrifice in the Mexica capital city of Tenochtitlan

Moctezuma loved eminences, for to stand on any high place was to be reminded that he was the greatest and most magnificent of men, wielding the power of life and death over all he surveyed. Yet of the countless high places in his kingdom, none offered him a deeper and more abiding sense of ownership, or clearer evidence of his own importance, than the summit platform of the colossal pyramid on which he now perched, soaring three hundred feet above his glorious capital city Tenochtitlan, which in turn stood on an island in the midst of a vast lake at the centre of an immense valley surrounded by lofty, snow-capped mountains.

Moctezuma’s gaze ranged out to those mountains and volcanoes – there Iztaccihuatl and there Popocatépetl – crowned with snow and wreathed with smoke.

Lower down, old-growth forests of tall trees carpeted the slopes, giving way in the floor of the valley to a gigantic patchwork of farmed fields shining green with new maize. The fields marched in to the edge of the great lake, its shores embellished with his vassal states, Tacuba, Texcoco, Iztapalapa, Coyoacan, Atzcapotzalco, Tepeyac and many more, its blue waters alive with fish, dotted with the bright colours of floating gardens planted with fruits and flowers, woven by the wakes of canoes, traversed by mighty causeways.

Moctezuma allowed his gaze to follow the causeways from the south, west and north where they led into Tenochtitlan, passing thousands of houses, whole districts, entire neighbourhoods standing out above the lake on stilts connected by a perfect geometrical grid of intersecting canals filled with busy water traffic. These gave way to streets lined with noble stone mansions, where flowers bloomed from every rooftop, interspersed by market squares and pyramids and temples and imposing public buildings, beneath which the contours of the original island on which the Mexica capital had been built could still just be discerned.

Closer still, surrounded and protected by the city as the nest of an eagle safeguards its egg, lay the vast square of the sacred precinct, defined by its massive enclosure wall, oriented to the cardinal directions, measuring seven hundred paces along each side and decorated with reliefs depicting huge bronze, green and blue serpents, their gaping jaws set with long fangs and their heads plumed with crests of feathers. The wall was penetrated by four giant gates, one each in the midst of its north, south, east and west sides, opening onto the polished limestone paving of the grand plaza and aligned with the north, south, east and west stairways of the great pyramid. Measuring three hundred paces on each side at its base, the pyramid rose up from the centre of the plaza in four successive levels, painted respectively green, red, turquoise and yellow, narrowing to fifty paces on each side at the summit where Moctezuma stood in possession of the very heart of the world. ‘Come Cuitláhuac,’ he said. ‘See how inspiring the view is this morning.’

Obediently his younger brother strode forward to join him at the top of the northern stairway, the hem of his scarlet cloak flapping around his large bare feet. Moctezuma wore purple, a colour reserved for the Great Speaker of the Mexica empire alone, his feet were shod with golden sandals and his head was adorned with the elaborate diadem of the monarch, studded with gold and jewels and enriched with precious feathers.

They were both tall, gaunt men but, looking at Cuitláhuac, Moctezuma thought, was like looking at himself in a poorly made obsidian mirror, for every aspect of their appearance was almost but not quite the same – the same fine bone structure, the same high, flat brow, the same liquid brown eyes, larger and rounder than was usual amongst the Mexica, the same sculpted cheek bones, the same long, prominent nose, the same delicate chin and the same full lips turned down disapprovingly at the corners. In Moctezuma these features were just as they should be and combined to create an aura of severe beauty and divine charisma fully justifying his powerful name, which meant ‘Angry Lord’. But in poor Cuitláhuac they were all very slightly awry – distorted, twisted and roughened in such a way that he could never hope to appear regal or commanding or ever live up to his name which meant ‘Eagle over Water’ but which could, with the deliberate mispronunciation of a single syllable, be made to mean ‘Heap of Excrement’ instead.

He looks so much older than me
, Moctezuma thought, which was gratifying because at forty-eight, Cuitláhuac was in fact five years his junior. Better still, he was loyal, stolid, unambitious, unimaginative, predictable and dull; in this ill-omened year of One-Reed, when dangers long prophesied threatened to manifest, such qualities made him invaluable. After Moctezuma himself and his deputy Coaxoch, now away on campaign in the mountains of Tlascala, Cuitláhuac ranked third amongst the lords of the nation and was a potential rival since he was of royal blood. There was, however, no danger he would ever seek to seize power for himself. On the contrary, Moctezuma could be absolutely certain of his brother’s steadfast support through whatever trials and turmoils lay ahead.

A shiver of apprehension ran down his spine and he glanced superstitiously over his shoulder at the tall, dark edifice that towered behind them. Dominating the summit platform of the pyramid, with its fantastic roof comb and brutal reliefs of serpents and dragons and scenes of battle and sacrifice, this was the temple of Huitzilopochtli, ‘Hummingbird’, the much-feared war god of the Mexica and Moctezuma’s patron deity.

War was a holy pursuit and by means of it, under Hummingbird’s guidance, the Mexica had risen in just two centuries from a wandering tribe of despised nomads to become the absolute masters of an enormous empire stretching from the eastern to the western oceans and from the lush jungle lowlands of the south to the high deserts of the north. After subjugating neighbouring states such as Tacuba and Texcoco and harnessing them to Tenochtitlan in a ruling alliance, Mexica armies had gone on to conquer ever more distant cities, peoples and cultures – Mixtecs, Huaxtecs, Tolucans, Cholulans, Chalcans, Totonacs and so many others. One by one, they had all been forced to become tribute-paying vassals offering up huge annual treasures in gold, jewels, maize, salt, chocolate, jaguar skins, cotton, slaves and a thousand other goods, including myriad victims for the human sacrifices that Hummingbird unrelentingly demanded.

There remained only a few pockets of resistance to this otherwise unstoppable advance. Of these, because of its central position in the ruling alliance, Moctezuma had to admit he was somewhat vexed by the recent turn of events in Texcoco, where he had ousted Ishtlil, the eldest son of the late King Neza, and placed Cacama, Neza’s youngest son, on the throne instead. This had been necessary because Ishtlil had proved to be a free thinker, showing signs of rejecting his vassal status, whereas Cacama was compliant and could be relied upon to do as he was told. The surprise was that the impertinent Ishtlil had refused to accept the coup and had staged a rebellion, leaving the lakeside city of Texcoco and its valley provinces in Cacama’s hands but taking the highland provinces out of the alliance.

Joshua Then and Now by Mordecai Richler
Black and White (Storm's Soldiers MC Book 1) by Notaro, Paige
The Dead Don't Bleed: Part 1, The Outbreak by S. Ganley
Forbidden Fruit by Erica Spindler
The Space in Between by Melyssa Winchester
Hercules: The Legendary Journeys Two Book Collection (Juvenile) by David L. Seidman
Hansel and Gretel by Jenni James
Paying The Piper by Simon Wood
The Reunion Mission by Beth Cornelison
The Face in the Forest by Benjamin Hulme-Cross
Our partner