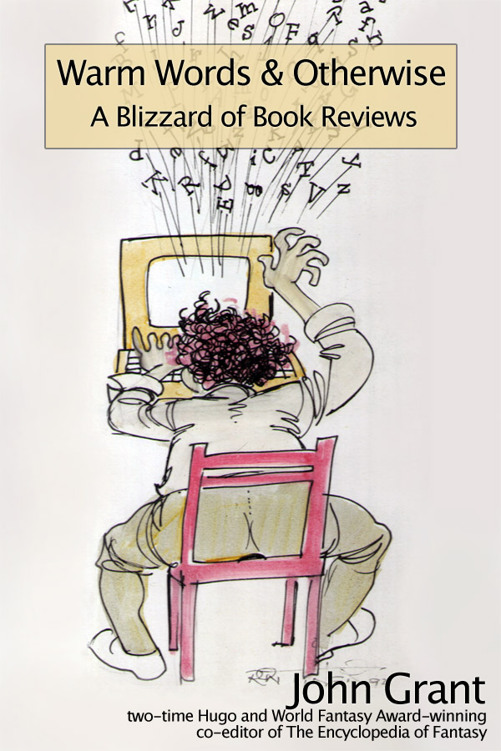 A Blizzard of Book Reviews

A bumper collection – over 150,000 words! – of book reviews, many of full essay length, by the two-time Hugo winning and World Fantasy Award-winning co-editor of The Encyclopedia of Fantasyand author, among much fiction, of such recent nonfiction works as Corrupted Science and Denying Science.

Scholarly, iconoclastic, witty, passionate, opinionated, hilarious, scathing and downright irritating by turn, these critical pieces are sure to appeal to anyone who loves fantasy, science fiction, mystery fiction, crime fiction and many points in between ... and who also enjoys a rousing argument.

No portion of this book may be reproduced by any means, mechanical, electronic, or otherwise, without first obtaining the permission of the copyright holder.

The moral right of John Grant to be identified as the author of this work has been asserted by him in accordance with the Copyright, Designs and Patents Act of 1988.

Why would anyone want to read a collection of book reviews?

It's a very good question, and one to which I'm not certain I have any coherent answer. The fact of the matter, though, is that book reviews have a power to fascinate us. Some friends in London have a bathroom shelved with old copies of
Foundation
and other literary magazines, and I'm far from the only guest of theirs to find myself spending far longer closeted than I'd originally intended. And one of the great joys of browsing through old magazines like the
Edinburgh Review
is discovering reviews of books you never knew existed by authors who've often been long ignored.

All right, then: an ancillary question. Why would anyone want to read a collection of
my
book reviews?

Let me get back to you on this.

The vast majority of the reviews in this book were produced in the early and middle years of the 21st century's first decade for two online venues, the website
infinity plus
, edited by Keith Brooke, and the genre-fiction webzine
Crescent Blues
, edited by Jean Marie Ward. Reviews for the former could be of any length I chose, and so some of the ones you'll find here are fairly long – up to several thousand words. Reviews for
Crescent Blues
, by contrast, were limited to 500 words (although I did, as you'll see, occasionally succeed in persuading Jean Marie to relax the rules a little). In the case of some of the other reviews here the wordcounts imposed by editors were even tighter and the dicta even stricter.

I discovered there were different skill sets (to use that ghastly but useful modern term) involved in writing essay-style reviews than in producing the shorter style; in the former I could bring in lots more information from outwith the scope of the book under consideration, and also I could opt far more for analysis and, to back up my contentions, citations of specific pieces of text or summaries of various plot points. Yet I soon found, too, that I could, as it were, sneak bits of analysis into the shorter-style reviews as well. My technique became to write the
Crescent Blues
(and similarly constrained) reviews to a length somewhat greater than would ever see print, then cut the text down savagely. Of course, I now wish I'd kept my original drafts ...

A few other magazines are represented here by a small number of reviews, sometimes just one:
SFX
,
Foundation
,
Extrapolation
and most especially the horror magazine
Samhain
, edited by John Gullidge. There are also a handful of reviews where, embarrassingly, I can no longer remember who they were written for. Google helped me in a couple of instances, but not for that final hard core. I can only assume they appeared in print magazines, and that my file copies of the relevant issues have long vanished into the quicksand of time. One culprit in this latter context may be my tumultuous move from one continent to another in 1999, during which a lot of stuff was discarded.

In pulling together this collection I obviously did a fair amount of basic copyediting and proofreading. (I was chagrined to find how many typos and general screw-ups there were in what I'd assumed to be pristine text! My apologies to all my original editors for the work I made for them.) I've excised some of my more irritating outbursts of adolescent snottiness and – although you may find this hard to believe as you read – plenty of incidences of ghastly, self-important pomposity. I've tidied up various instances of repetitive ideas and phraseology; for example, when reviews appeared separately it didn't much matter if I quite often said a book was "well worth your while", but when reading the text all together I found the repeated phrase rebarbative. I've added a few footnotes, clearly labelled, where it has seemed to me that an extra comment from the perspective of 2011 is called for. And I've on occasion found myself trying my damnedest to remember the first thing about books that in my reviews I described as "unforgettable".

Most of the books discussed are fiction, split about half and half (although I haven't counted) between fantasy/science fiction and mystery/crime. There are also a few nonfiction books represented here, many of them from the publisher Prometheus. At the moment I'm going through the copyeditor's corrections for my own first book for Prometheus,
Denying Science
. It's a small world, or something. What worries me is that I see I've quite often been a bit scathing about the standards of proofreading and so forth in the Prometheus books I've reviewed. Fingers crossed none of their staffers ever ventures here ...

During the surprisingly long editorial process involved in preparing this text it was borne in on me more and more what a huge debt of gratitude I owe to the authors of all the books reviewed here, even the ones where my comments have been less than complimentary. Writing about those books has shaped the person I am today, and the way that I look at the world.

Renegade by Alers, Rochelle
Seeking Evil (Looking Into The Mind Of A Killer Series) by Eason, Mary
Doctor in the House by Richard Gordon
The Righteous Cut by Robert Skinner
The Billionaire's Best Friend (The Sherbrookes of Newport) by Tetreault, Christina
Mars Prime by William C. Dietz
Faded Perfection (Beautifully Flawed Book 2) by Cassandra Giovanni
Nobody by Barnes, Jennifer Lynn
Bushfire! by Bindi Irwin
Hooker by J. L. Perry
Our partner