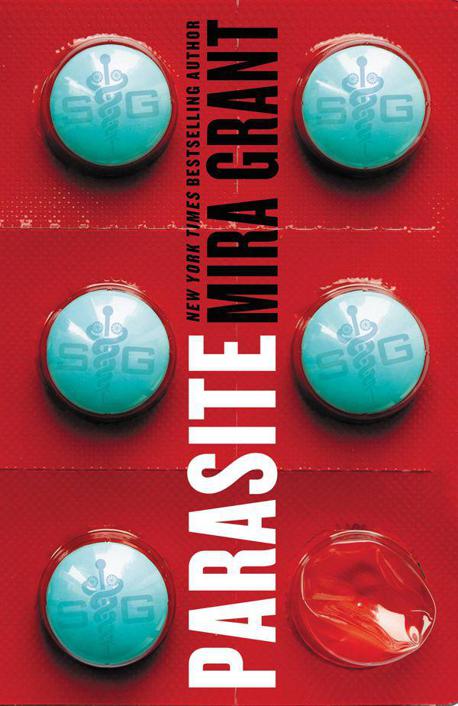 For Melissa and Rachel.

You are very good sisters.

My darling ones, be careful now, and don’t go out alone.

Here there be monsters.

[The recording is crisp enough to look like a Hollywood film, too polished to be real. The lab is something out of a science fiction movie, all pristine white walls and gleaming glass and steel equipment. Only one thing in this scene is fully believable: the woman standing in front of the mass spectrometer, her wavy blonde hair pulled into a ponytail, a broad smile on her face. She is pretty, with a classic English bone structure and the sort of pale complexion that speaks less to genetics and more to being the type of person who virtually never goes outside. There is a petri dish in her blue-gloved hand.]

DR. CALE:
Doctor Shanti Cale,
Diphyllobothrium symbogenesis
viability test thirty-seven. We have successfully matured eggs in a growth medium consisting of seventy percent human cells, thirty percent biological slurry. A full breakdown of the slurry can be found in the appendix to my latest progress report. The eggs appear to be viable, but we have not yet successfully induced hatching in any of the provided growth mediums. Upon consultation with Doctor Banks, I received permission to pursue other tissue sources.

[She walks to the back of the room, where a large, airlock-style door has been installed. The camera follows her through the airlock, and into what looks very much like an operating theater. Two men are waiting there, faces covered by surgical masks. Dr. Cale pauses long enough to put down her petri dish and put on a mask of her own.]

DR. CALE:
The subject was donated to our lab by his wife, following the accident which left him legally brain-dead. For confirmation that the subject was obtained legally, please see the medical power of attorney attached to my latest progress report.

[The movement of her mask indicates a smile.]

[Dr. Cale crosses to the body. Its midsection has been surrounded by a sterile curtain; the face is obscured by life support equipment, and by the angle of the shot. She pulls back the curtain to reveal the gleaming interior of the man’s sliced-open abdomen. The skin has been peeled back, and the blood has been suctioned away, revealing a wide array of colors. Liver brown, intestinal green and glistening white, and the smooth pink sac of the stomach. Calmly, she reaches into the man’s body, pushing organs aside until the surface of the small intestine is revealed.]

[One of the masked men passes her the requested tool. She takes it, pressing down against the man’s intestine. He does not move. Her hand does not tremble.]

DR. CALE:
I am not following strict sterile protocol, in part because infection is not a risk. The subject’s immune system has been supplemented.
D. symbogenesis
eggs were
introduced to the subject’s system six days ago, fed into his body along with the nutrient paste we have been using to preserve basic biological functions.

[The surface of the intestine splits, spilling a thin film of brownish liquid over the surrounding organs. Dr. Cale ignores it as she sets the scalpel aside and thrusts her hand into the man’s body. He still does not move as she digs through his small intestine. When she finally retracts her hand, she is clutching something. She pulls down her mask with her free hand and directs a beatific smile toward the camera.]

DR. CALE:
I am pleased to report that we have multiple fully-formed proglottids present in the subject’s body, as well as some partial strobila.

[She holds out her hand. The camera zooms in on the white specks writhing against her gloved fingers.]

DR. CALE:
D. symbogenesis
is capable of maturing when cultured inside a living human host. Ladies and gentlemen… at long last, it’s alive.

[The film ends there. There are no notes in Dr. Cale’s progress reports relating to the eventual fate, or original identity, of the first human subject used to culture
D. symbogenesis
. The medical power of attorney referenced in the recording has never come to light.]

This is not the first thing I remember.

She was up against an army—an army that had begun with paramedics, moved on to doctors, and finally, to complicated life support machines that performed their function with passionless efficiency—but none of that seemed to make any difference. She had always been determined, and now, she was determined to die. Silently, and despite everyone’s best efforts, she was slipping further and further away.

It was not a swift process. Every cell in her body, damaged
and undamaged alike, fought to retain cohesion. They struggled to pull in oxygen and force out the toxins that continued to build in her tissues and bloodstream. Her kidney function had been severely impaired in the accident, and waste chemicals had ceased to be automatically eliminated. She no longer responded in any meaningful way to external stimuli. Once she was removed from the machines that labored to keep her body functional, her life would come to an end in very short order.

Sally Mitchell existed in a state of living death, sustained by technology, but slipping away all the same.

Her hospital room was crowded—unusually so, for a woman standing in death’s doorway, but her doctor had hoped that by bringing her family to see her, he could better plead his case for taking her off life support. The damage from the accident had been too great. Tests had shown that Sally herself—the thinking, acting girl they remembered—was gone. “Clinical brain death” was the term he used, over and over again, trying to make them understand. Sally was gone. Sally was not coming back. And if they kept her on artificial life support for much longer, more of her organs would begin to shut down, until there was nothing left. If her family approved the procedures to harvest her organs now, her death could mean life for others. By pairing her organs with splices taken from her SymboGen implant, the risks of rejection could be reduced to virtually nothing. Dozens of lives could be saved, and all her family had to do was approve. All her family had to do was let her go.

All they had to do was admit that she was never waking up.

The ceiling was so white it burned, making her eyes begin to water in a parody of tears. She stared up at it for almost a minute, unable to process the message she was getting from her nerves. The message wanted her to close her eyes. Another part
of her brain awakened, explaining what the burning sensation in her retinas meant.

The doctor was still pleading with her family, cajoling and comforting them in turn as he explained what would happen next if they agreed to have Sally declared legally dead. His voice was no more or less compelling than the buzz of the machines around her. None of his words meant anything to her, and so she dismissed them as unimportant stimuli in a world that was suddenly full of unimportant stimuli. She focused instead on getting her eyes to open again. She wanted to see the white ceiling. It was… interesting.

The second time Sally opened her eyes, it was easier. Blinking came after that, and then the realization that she could breathe—her body reminded her of breathing, of the movement that it required, the pulling in of air through the nose, the expelling of air through the mouth. The respirator that was supposed to be handling the breathing process began beeping shrilly, confused in its mechanical way by her sudden involvement. The stimulus from the man in the ceiling-colored coat became more important as it grew louder, hurting her ears.

More machines started to beep. Sally winced, and then blinked, surprised by her own automatic reaction. She winced again, this time on purpose. The man in the ceiling-colored coat stared at her and said something she didn’t understand. She looked blankly back at him. Then the other people in the room started making noise, as shrill and confused as the machines around her, and one of them flung herself onto the bed, putting her arms around Sally and making a strange sound in her throat, like she was choking.

More people came into the room. The machines stopped making noise, but the people kept on doing it, making sounds
she would learn were called “words,” asking questions she didn’t have answers for, and meanwhile, the body lived. The cells began to heal as the organs, one by one, resumed the jobs they had tried to abandon.

Sally Mitchell was going to live. Everything else was secondary.

Your health is too important to trust to just anyone. Choose SymboGen. Choose freedom.

When the hygiene hypothesis was proposed in the late 1980s, most people laughed it off as fringe science. It was based around the idea that more people were developing life-threatening allergies and autoimmune conditions because they weren’t getting enough early-life exposure to infectious agents. Not just viruses—everyone gets exposed to viruses, unless they live inside a bubble—but allergens, bacteria, even parasites. We weren’t living in literal bubbles, but we were sterilizing our environments more every year, and we were starting to see the effects. Children were getting sick because we refused to let them play in the dirt. It was a ludicrous idea. Pure scientific comedy.

Except that by the beginning of the 21st century, no one was laughing. More and more, the human race was being faced with a choice: find a way to keep our systems in the equilibrium they had evolved to maintain, or accept a future of chronic illness, increasing biological and neurological disorder, and potentially, eventually, extinction.

That’s where we came in.

—FROM “KING OF THE WORMS,” AN INTERVIEW WITH DR. STEVEN BANKS, CO-FOUNDER OF SYMBOGEN. ORIGINALLY PUBLISHED IN
ROLLING STONE
, FEBRUARY 2027.

… traffic cameras captured images of the driver’s hands beginning to shake uncontrollably in the middle of the intersection before she apparently experienced a massive seizure, losing control of her vehicle and causing a dramatic sheer to the right. Witnesses reported that Sally Mitchell, age 20, appeared unaware of her surroundings as she drove straight into the path of an oncoming crosstown bus.

In his deposition, the bus driver (David Alexander, 37) claimed he had been unable to either hit the brakes or swerve to avoid Mitchell’s car. The two vehicles collided without slowing, sending Mitchell slamming into the wall of a nearby bank. One pedestrian was hit, Anthony Thomas, 28. Mr. Thomas was hospitalized for a broken leg and several minor contusions, and was released two days later. At the time of this writing, Sally Mitchell remains under hospital care, and has not yet regained consciousness…

Blur (Changing Colors Book 2) by Alcorn, N.A.
The Rebel by McGoldrick, May
Doubled Up (Imogene Museum Mystery #2) by Jones, Jerusha
The Christmas Child by Linda Goodnight
Shadow River by Ralph Cotton
The Hawkline Monster: A Gothic Western by Richard Brautigan
Half-Resurrection Blues by Daniel José Older
Away From the Sun by Jason D. Morrow
Thea's Tale (Sisters Of The Curse Book 1) by Lisa Manifold
My Life Next Door by Huntley Fitzpatrick
Our partner