“Or at least going to jail and having everything confiscated,” Brockunier chimes in.

“It's a good sign,” Rasoul says, calming everyone down. “We still have a long way to go. Let's get some rest.”

I'm exhausted and try to close my eyes and doze off again, but it's impossible to sleep as we wind higher into the mountains and the road becomes narrower and more difficult to navigate, especially with our headlights still off. Finally, we stop in the middle of nowhere. No more road. Nothing but mud and snow.

“We must unload everything here,” Rasoul says, still whispering and gesturing for quiet. “No flashlights. No talking.”

Once we have our things, our mujahideen driver and guard hug Rasoul, jump back in the Jeep, start the engine, and somehow find a way to turn around and drive off. The woods around us are pitch black. While it was hot in the valleys below, it's freezing cold here. Deep banks of springtime snow are illuminated by the brilliant starlight. We just stand still and shiver, our gear held in our arms, as the drone of the Jeep's engine disappears down the mountainside.

“What the hell is happening?” Dennis whispers to me, risking a rebuke from Rasoul. “We might just freeze to death!”

I look at him and shake my head. Shrug my shoulders. Then I pat the sleeping bag roped onto my backpack and wonder how warm it will keep me in the wet snow. Suddenly I remember we only have one
or two days' worth of food with us. As I start to think it might have been better had the tribal Pakistanis arrested us, we hear a faint, sloshing sound at the tree line. Now we can make out the silhouette of two figures under the starlight. A man with a rifle over his shoulder and a mule. They approach silently. He is mujahideen. His first glance is toward Rasoul, who then gestures for us to pile our gear on the mule.

We walk behind the mujahideen, who leads us into the cover of the woods and up the mountainside. It's slow going. Grueling, in fact. The snow is up to our knees and the temperature beyond freezing. We touch one another's backs to keep from getting lost. An hour later, we arrive at a bombed-out farmhouse. More mujahideen appear in the darkness. There are no lights. Not even a candle. Nothing to give the Soviets a chance to discover their position. We stumble into a dark, frigid hallway of the home, finally making it to a room with a wooden floor covered in straw. About to collapse, we unroll our sleeping bags and slip in. Curling up, I roll over and whisper to Dennis, “We made it.”

We're beyond exhausted, but we get only two, maybe three, hours of sleep before we are told to roll up our bags and quietly depart before sunrise. There are three mules now, the one with our gear, the other two laden with rounds of ammunition, artillery shells, and grenades. It takes a full day of vertical hiking through heavier snow to find the hidden camp of a group of some two hundred mujahideen. The fighters line up in the glistening snow to meet us, surrounded by towering pines. They shoulder their weapons, from old rifles to AK-47s to rocket launchers, as a show of pride and dedication. Most are rustic farmers from small mountain villages. They range in age from fourteen to eighty-four. Several have lost a leg or an arm to land mines. It hasn't slowed them down a bit. Instead, it has strengthened their resolve. I will soon realize the oldest among them could outhike me on my best day.

Rasoul introduces us as American journalists who have come to document their struggle. Like the Pakistanis, most Afghans dislike
America but again, the enemy of their enemy is their friend. At least for now. Brockunier delivers his medical supplies to the chief of the fighters and all the men chant “
AllÄhu Akbar,
” meaning “God is great.” Dennis films them thrusting their weapons into the air, symbolizing that this is a holy war.
When our viewers see this back home they'll be blown away
, I think, as Dennis deftly puts his lens a few inches away from a boy's hand clutching the trigger of his weapon and then pans to his innocent face.

We live with the mujahideen for the next week, sleeping in small huts while burning frozen wood soaked in kerosene to avoid freezing to death. There's only enough food for one meal a day. It's always goat fat boiled into a filmy yellowish grease and served in large, communal bowls, with broken goat bones at the bottom. We sit in circles on the ground and scoop up each bite with a traditional flatbread called naan that the mujahideen bake in makeshift clay ovens. The grease is rancid. The gristle on the bones is black with rot. We're so hungry that it tastes delicious, especially the steaming hot naan.

Dennis and I hold each piece of naan in our fingertips, carefully dipping it into the bowl and slipping it into our mouths. It's challenging to do so without having grease run down our arms. I have to be especially careful since I'm left-handed. The left hand is the one used throughout the region for self-cleaning after defecation. Reaching my left hand into the food bowl would be the ultimate gaffe. For me it's almost impossible to remember. I come close to muffing it every day.

The mujahideen have well-camouflaged anti-aircraft guns posted high above the camp. Just before sunset, they fire at any Soviet MiGs seen flying at altitudes well beyond the range of their artillery. After shooting a few rounds, they circle the guns and chant “
AllÄhu Akbar,
” then almost sing, repeatedly, in Pashto, “We vow to purge the satanic invaders from our homeland!”

The real fighting starts long before dawn. The mujahideen slip down dark trails into the valley below to launch guerrilla attacks against Soviet outposts on major roads that connect the few major cities of Afghanistan, all of which are under Soviet control. When helicopter gunships counterattack, they scurry back into the mountains, hiding under huge boulders along the way, carefully moving toward the cover of the thick forest. Back in camp, the fighters treat the wounded with Brockunier's medical supplies. They bury their dead before sundown. We film everything we can. Their war against the mighty Soviet Army is like a small shepherd boy against a towering, battle-trained giant. But these are the toughest people I have ever met and they fight boldly, like David going after Goliath with just a stone and a slingshot. 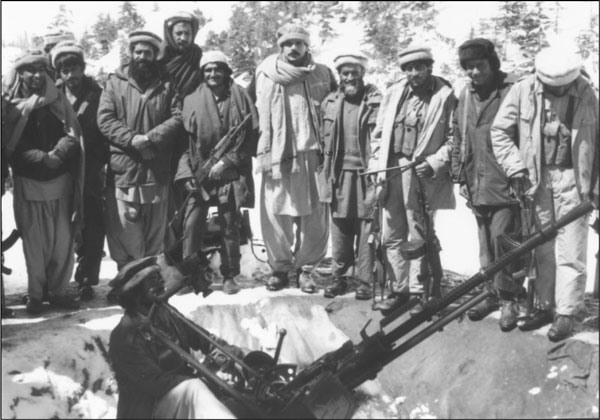 With mujahideen inside Afghanistan in 1986.

After leaving the mujahideen and saying good-bye to Rasoul and Brockunier, Dennis and I make our way into the sprawling camps along the Pakistani border. There are 5 million refugeesâone-third of the Afghan populationâliving in horrid conditions, many without so much as a ragged tent over their heads. This is the unseen horror of the Cold War as it's played out around the world. The Soviets invade Afghanistan as a pushback to American influence in Pakistan.
The Americans then push back against communist expansionism. Innocent people get hurt. Lots of them. I am thirty-seven years old and have been in some rough places, but this is human suffering beyond anything I have ever witnessed or even imagined. It sickens me. Angers me. Makes me want to cry. And it strengthens my resolve to tell this story.

We film improvised burial grounds, where bodies are stacked atop one another and covered with dirt and large stones. They surround the edges of the camps like anthills. Those who survive cling to life with incredible determination, refusing to succumb to the diseases that spread like fire. More victims pour into the overwhelmed treatment centers every day. This is where we find Mahmoud and the other wounded Afghan children. We are here for three days, rushing to complete our filming in the camps and main refugee hospital before we fly home. In all, we have been gone less than a month, but it feels like a lifetime. 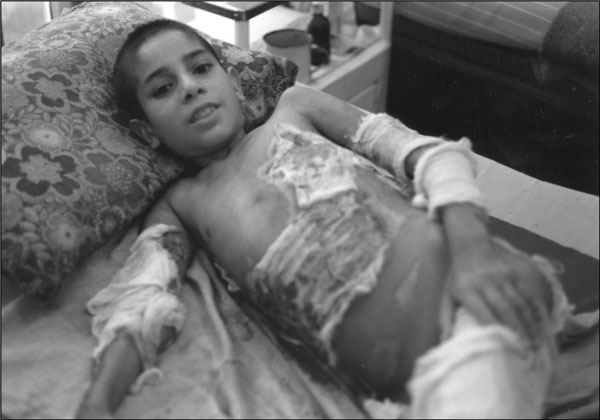 Back in Boston, we air a series of reports entitled “Afghanistan, the Untold Story.” I knew this was powerful stuff, but I never dreamed the response would be so overwhelming. Viewers throughout New England rally to the cause. Schoolchildren launch class projects, draw pictures for the children in the camps, and mail them with bags of coins from their piggy banks. Viewers form groups to collect donations of food, clothing, and medical supplies, which Brockunier ships directly to the refugee hospital where we found Mahmoud. New England hospitals offer their facilities, time, and services. Airlines agree to fly in dozens of war-wounded children for world-class medical treatment. Our viewers open their homes to family members accompanying the Afghan children as they arrive in Boston for eye surgery, prosthetic devices, and burn treatments. Mahmoud is on the very first flight and will soon be cared for at the Shriner's Burn Institute. I cover it all, with a new story almost every night. More than ever before, it makes me feel like what I do for a living is making a difference in the world.

Over the next few months, I'm periodically sent on the road to other major stations of Group W, which owns WBZ, and I broadcast the reports from Philadelphia to San Francisco, appearing on talk shows and giving public speeches. One morning, shortly after I return to Boston, Stan calls me into his office to tell me our work has been given a Columbia-DuPont Award. I don't even know what the award is until he explains it's the broadcast equivalent of the Pulitzer Prize.

Mama Sees Stars: A Mace Bauer Mystery by Deborah Sharp
Seize the Night by Dean Koontz
You Belong To Me by Patricia Sargeant
Xander vol.1 Transmutation by Jaz Johnson
The Drowning by Camilla Lackberg
The Horseman on the Roof by Jean Giono
Taming Damian by Jessica Wood
Bodyguard (Den of Thieves, #2) by A.M. Cosgrove
The Strain, the Fall, the Night Eternal by Guillermo Del Toro
Touch of Doubt (Law vs. Love Book 2) by Alexander, Audrey
Our partner