Read We Only Need the Heads Online

We Only Need the Heads 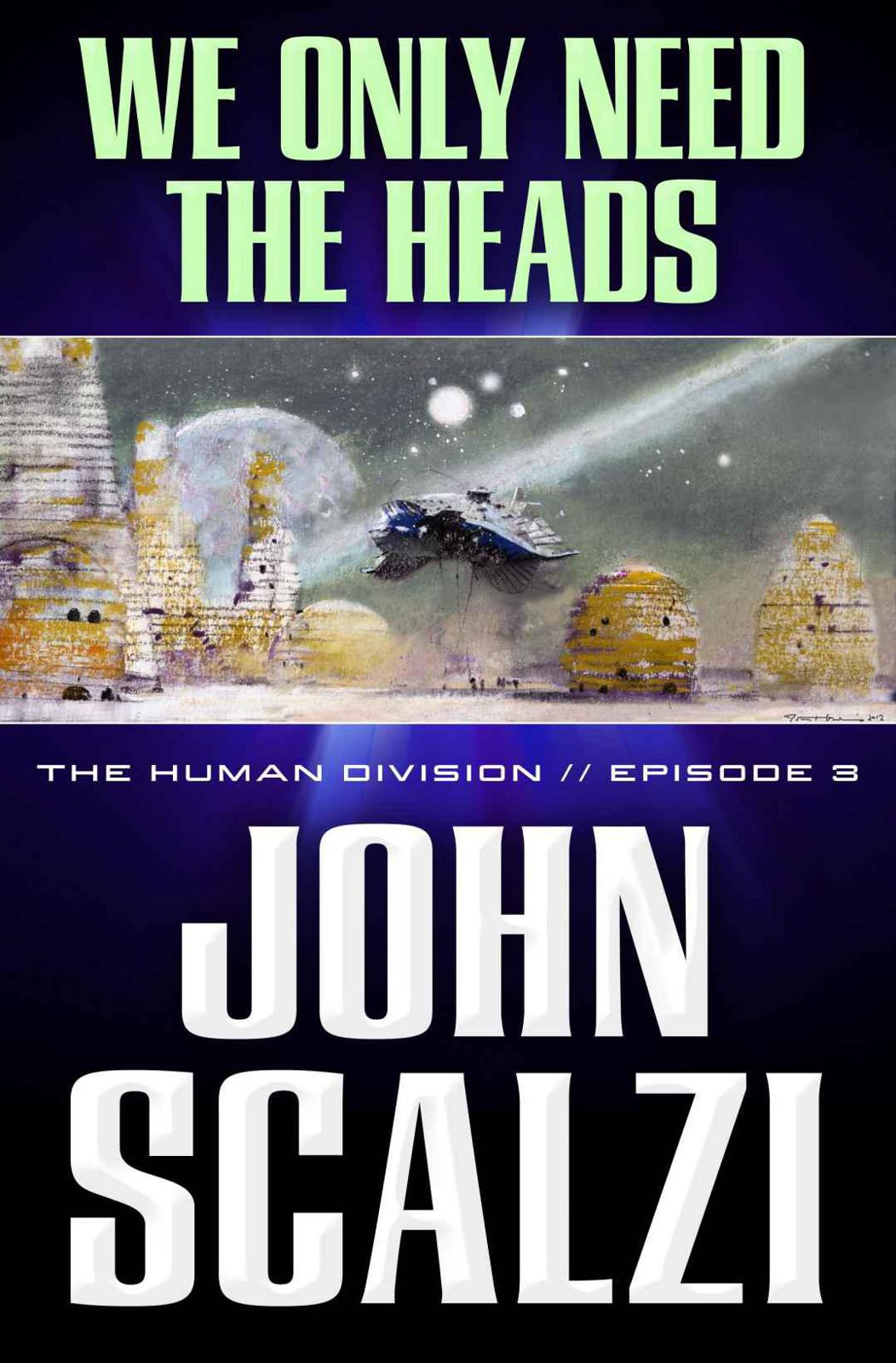 We Only Need the Heads

The Human Division
as a whole is dedicated to:

Yanni Kuznia and Brian Decker, two of my favorite people;

John Harris, for his wonderful cover art for this and other Old Man’s War books.

Additionally, this particular Episode is dedicated to:

Alexis Saarela, Patty Garcia, and everyone in Tor Publicity

Episode Three: We Only Need the Heads

Hart Schmidt went to Ambassador Abumwe’s temporary office on Phoenix Station when she pinged him, but she wasn’t there. Schmidt knew that the ambassador not being in her office wasn’t a good enough excuse for him not to be in her presence when commanded, so he did a hasty PDA search on his boss. Three minutes later, he walked up to her in an observation lounge.

“Mr. Schmidt,” the ambassador said, not turning to him. Schmidt followed her gaze out the wall-sized window of the observation deck, to the heavily damaged ship hovering at a slight distance from the station itself.

“Very good, Schmidt,” Abumwe said, in a tone that informed him that, as with so many of the things he said to her in his role as a functionary on her diplomatic team, he was not telling her anything she didn’t already know.

Schmidt made an involuntary, nervous throat clearing in response. “I saw Neva Balla earlier today,” he said, naming the
Clarke
’s executive officer. “She tells me that it’s not looking good for the
Clarke
. The damage it took on our last mission is pretty extensive. Fixing it will be nearly as expensive as building a new ship. She thinks it’s likely they’ll simply scrap it.”

“And do what with the crew?” Abumwe said.

“She didn’t say,” Schmidt said. “She said the crew is being kept together, at least for the moment. There’s a chance the Colonial Union may just take a new ship and assign the
Clarke
’s crew to it. They might even name it the
Clarke,
if they’re going to scrap this one.” Schmidt motioned in the direction of the ship.

“Hmmmm,” Abumwe said, and then lapsed back into silence, staring at the
Clarke
.

Schmidt spent a few more uncomfortable minutes before clearing his throat again. “You pinged me, Ambassador?” he said, reminding her he was there.

“You say the
Clarke
crew hasn’t been reassigned,” Abumwe said, as if their earlier conversation hadn’t had an extended pause in it.

“Not yet,” Schmidt said.

“And yet,
my
team has,” Abumwe said, finally looking over at Schmidt. “Most of it, anyway. The Department of State assures me that the reassignments are only temporary—they need my people to fill in holes on other missions—but in the meantime I’m left with two people on my team. They left me Hillary Drolet, and they left me you. I know why they left me Hillary. She’s my assistant. I don’t know why they chose to take every
other
member of my team, assign them some presumably important task, and leave
you
doing nothing at all.”

“I don’t have any good answer to that, ma’am,” was the only thing that Schmidt could say that wouldn’t have immediately put his entire diplomatic career in jeopardy.

“Hmmmm,” Abumwe said again, and turned back to the
Clarke
.

Schmidt assumed this was his cue to depart and began stepping back out of the observation deck, perchance to avail himself of a stiff drink at the nearest commissary, when Abumwe spoke again.

“Do you have your PDA with you?” she asked him.

“Check it now,” Abumwe said. “We have new orders.”

Schmidt drew out the PDA from his jacket pocket, swiped it on and read the new orders flashing in his mail queue. “We’re being attached to the Bula negotiations,” he said, reading the orders.

“Apparently so,” Abumwe said. “Deputy Ambassador Zala ruptured her appendix and has to withdraw. Normally protocol would have her assistant step up and continue negotiations, but Zala’s plank of the negotiations hasn’t formally started, and for protocol reasons it’s important for the Colonial Union to have someone of sufficient rank head this portion of the process. So here we are.”

“What part of the negotiations are we taking over?” Schmidt asked.

“There’s a reason I’m having you
read
the orders, Schmidt,” Abumwe said. Her tone had returned. She turned to face him again.

“Sorry, ma’am,” Schmidt said, hastily, and gestured at his PDA. “I’m not there yet.”

Abumwe grimaced but kept whatever comment about Schmidt that was running through her head to herself. “Trade and tourism access to Bula worlds,” she said instead. “How many ships, how large the ships, how many humans on the ground on Bulati and its colony worlds at one time, and so on.”

“We’ve done that before,” Schmidt said. “That shouldn’t be a problem.”

“There’s a wrinkle that’s not in your orders,” Abumwe said. Schmidt looked up from his PDA. “There’s a Bula colony world named Wantji. It was one of the last ones the Bula claimed before the Conclave told the unaffiliated races they could no longer colonize. They haven’t put any of their people on it yet because they don’t know how the Conclave would react to that.”

“What about it?” Schmidt asked.

“Three days ago, the CDF received a skip drone from Wantji with an emergency distress message in it,” Abumwe said.

Why would the Bula on an officially uninhabited planet send the Colonial Defense Forces a distress message?
Schmidt almost asked, but didn’t. He realized it was exactly the sort of question that would make the ambassador think he was even more stupid than she already believed he was. Instead he attempted to figure out the question on his own.

After a few seconds, it came to him. “A wildcat colony,” he said.

“Yes,” Abumwe said. “A wildcat colony that the Bula don’t appear to know anything about at the moment.”

“We’re not telling them it’s there?” Schmidt asked.

“Not yet,” Abumwe said. “The CDF is sending a ship first.”

“We’re sending a
warship
into Bula territory to check on a human colony that’s not supposed to be there?” Schmidt said, slightly incredulously. “Ambassador, this is a very bad idea—”

“Our job in the negotiations is twofold,” Abumwe said. “We negotiate the trade and tourism rights. We also negotiate them
slowly enough
that the
Tubingen
is able to get to Wantji and pluck that wildcat colony—or what’s left of it—from the planet.”

“Without telling the Bula,” Schmidt said. He kept the skepticism from his voice as politely as possible.

“The thinking is that if the Bula aren’t aware of it now, there is no point in making them aware,” Abumwe said. “And if they become aware, then the wildcatters will have been removed before they present a genuine diplomatic issue.”

“As long as they overlook a CDF ship having done time over their planet,” Schmidt said.

“The thinking is that the
Tubingen
will be long gone before the Bula know they’re there,” Abumwe said.

Schmidt refrained from saying,
It’s still a bad idea,
and chose something else instead. “You said it’s the
Tubingen
that’s heading to this colony planet,” he said.

Schmidt accessed his PDA and searched through his message queue. “Harry Wilson was attached to the
Tubingen
a few days ago,” he said, and turned his PDA to the ambassador to show her the message Wilson had sent him. “Its CDF platoon lost their systems guy on Brindle. Harry was stepping in for their current mission. Which would be this one, wouldn’t it.”

“Yet another team member of mine farmed out,” Abumwe said. “What is your point?”

“My point is that it could be useful for us to have someone on the ground on this,” Schmidt said. “You know we’re getting dealt a bad hand here, ma’am. At the very least Harry can tell us how bad of a hand it actually is.”

“Asking your CDF friend for information on an active military mission is a fine way to get yourself shot, Schmidt,” Abumwe said.

“I suppose it would be,” Schmidt said.

Abumwe was silent at this for a moment. “I don’t think you should risk being caught doing something like that,” she said, eventually.

“I understand you entirely, ma’am,” Schmidt said. He turned to go.

“You understand that earlier I was implying that they left you with me because you were largely useless,” Abumwe said.

“I got that, yes,” Schmidt said, after a second.

“I’m sure you did,” Abumwe said. “Now. Prove me wrong.” She returned her gaze to the
Clarke
.

Oh boy, Harry,
Schmidt thought as he walked away.
I hope you’re having an easier time of things than I am right now.

The shuttle from the
Tubingen
hit the atmosphere of the planet like a rock punching into an earthen dam, throwing off heat and rattling the platoon of Colonial Defense Forces soldiers inside as if they were plastic balls in a child’s popper.

“This is nice,” Lieutenant Harry Wilson said, to no one in particular, then directed his attention to his fellow lieutenant Heather Lee, the platoon commander. “It’s funny how something like air can feel so bumpy.”

Lee shrugged. “We have restraints,” she said. “And this isn’t a social call.”

“I know,” Wilson said. The shuttle rattled again. “But this has always been my least favorite part of a mission. Aside from, you know. The shooting and killing and being shot and possibly eaten by aliens.”