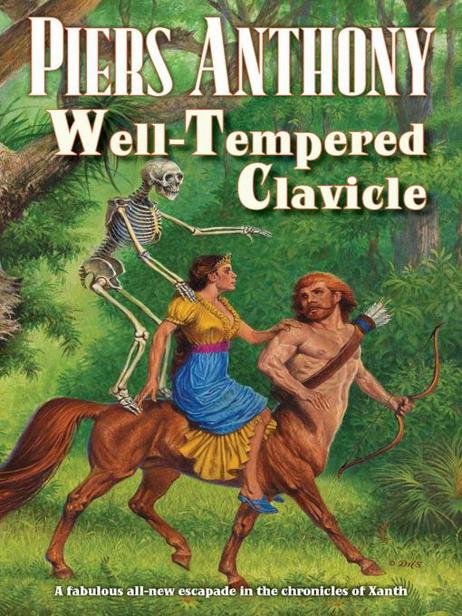 In memory of our daughter

“What’s that?” Picka Bone asked, startled. His bone head was hollow, but this was normal for a walking skeleton, and he could see, hear, and think well enough. Magical creatures were not handicapped in the manner of mortal ones; they were not subject to the ills of flesh. As it happened, they were just completing their hourly tour of the cemetery they were patrolling.

“It’s a living cat,” his sister Joy’nt said. She was his age, twenty-four, with nice bones. “With a bird sitting on his head.”

“That’s what I thought it was. Don’t live cats normally eat live birds?”

“Normally,” Joy’nt agreed. “There may be an interesting story here.”

“And we could use some interest in our dull routine.” For that was a liability of their state: terminal dullness. Without the fear of pain or death, they seldom got exited. Intellectual interest was about all that sustained them, and they were not great intellects.

The cat was coming directly toward them. It was a nondescript male with blond fur, evidently mundane. The little bird was flapping its wings but not flying, as if trying to get their attention. It was a male parakeet with brownish feathers, another mundane creature. They halted right before the skeletons.

Joy’nt had a soft spot for animals, figuratively, as none of her was physically soft. She squatted and extended her bone hand to the cat to sniff. “What can we do for you, strange feline?” she inquired.

The cat scratched in the sand, smoothing it. Then he stroked a claw across it several times, forming some kind of pattern. In fact it was alphabetical letters.

The cat turned and went back the way he had come. The bird, still riding his head, cheeped and flipped one wing, as if encouraging them to follow.

They walked through the graveyard, past the F and G gravestones that were shaped like the letters F and G to represent Effie and Gee, who had been hanged in effigy. Past the stone saying
FOR PETE’S SAKE!
in honor of a man who hadn’t planned on dying. There were all manner of mildly amusing stones here. Picka and Joy’nt had wandered though the graveyard repeatedly, and each time discovered something they had missed before.

The cat and bird led them to a collapsed crypt they had not noticed; it was one of several rather old and worn structures scattered through the graveyard. This one had been open and empty, of no concern. The stone slab that formed the roof of the front portal had dropped down, sealing it off.

The bird nodded. It was evident that these animals understood human speech, but could not speak it. Many animals were like that.

Now they heard a faint “Woof!” Something was in there!

Picka braced himself, got his bone fingers on the stone, and heaved it up and to the side. Walking skeletons had no muscles but were stronger than they looked, being magically animated. The portal was open.

A big dark mongrel mundane dog came out, tail wagging, glad to be freed. He joined the other two. The three were evidently friends, odd as such an association might be.

“You wanted to rescue a dog?” Picka asked the cat, surprised again.

“I think we deserve an explanation,” Joy’nt said.

The three animals just looked at her. Maybe they were having trouble with the idea of an explanation, when they couldn’t speak human.

“Let’s trade,” Picka said. “We’ll tell you about us if you tell us about you.”

The bird, cat, and dog exchanged glances. Then the bird nodded.

“First we need a better way to communicate,” Joy’nt said. “I know just the thing.” She fished in her hollow skull and brought out a roll of bone-colored paper. She spread this on the ground. “This is a magic marker made from dragon bone,” she explained. “I got it from a man I met named Cody, who could decipher any code or language. It works only for living creatures, so I never had use for it before. Whoever wants to talk can put a hand, claw, or paw on it, focus, and it will print your thought. Try it.”

The cat touched the paper with a paw. Words formed.
I AM MIDRANGE CAT
.

The dog tried it.
I AM WOOFER DOG
.

Finally the bird flew down and landed on it with both feet.
II AAMM TTWWEEEETTEERR BBIIRRDD
.

Midrange made a mewl of impatience. He touched the paper.
JUST ONE FOOT, BIRDBRAIN!

Tweeter hauled up a foot.
OOPS.

Joy’nt glanced at Picka. She had no eyes, of course, but her squared-off eyeholes could be expressive. “Now give our history, briefly.”

“I am Picka Bone, son of Marrow Bones and Grace’l Ossein,” Picka said. “This is my sister, Joy’nt. Our kind, the walking skeletons, originated in the dream realm of the gourd, but Esk Ogre found Marrow on the Lost Path and brought him out to Xanth proper. So Marrow and Grace’l are no longer scary dream figures, but regular Xanth denizens. Marrow once accompanied Prince Dolph on an adventure. That was when he met Electra, and later married her, and they got the twin sisters Sorceresses Dawn and Eve. Later Marrow got half a soul, which he shared, so we have eighth souls. So we feel obliged to do some good in Xanth. We have wandered all around, but living humans tend to avoid our company, so we have been unable to do them much good. We agreed to watch this graveyard for a month so the zombies could take a break. This is our last day; we don’t know what we’ll do tomorrow, but hope it isn’t too boring. Our hollow heads get easily bored.” He made a little screwing motion with a bone finger, as if boring into his skull.

Picka had given them his personal history. Did they really understand any of it? Did they care? How would they respond?

The cat touched the marker. A column of print appeared. Digested, it was this:

“We are three pets brought from Mundania by the Baldwin family fifteen years ago. Our names are Woofer, Tweeter, and Midrange, as specified above. It seems the Baldwins liked music, so they named us after their speakers. We liked our family, but pets don’t live forever in drear Mundania, so when we got old we migrated here, thanks to a dispensation from the Demon Xanth, for whom I once did a favor. Now we are back in our primes of life, but even a magic land can get dull, so we are looking for adventure. Woofer has a nose for that sort of thing, and he led us to this cemetery, and to this crypt. There is something interesting in there. But when Woofer went in, the stone fell down, trapping him. So we came to you to beg for help. You helped us, so we owe you a favor. What favor do you want, that we can do?”

Picka exchanged another eyeless glance with his sister. “We’d like to find something interesting to do tomorrow,” she said.

“So would we,” Midrange spelled out on the marker. “Maybe we all should share a great adventure.”

“We hoped you would know,” Midrange printed.

Picka tapped his skull with a knuckle. “Our empty heads are not great on ideas. In fact I’m not great on anything much. Joy’nt has the usual skeleton talent of disassembly and reformulation; she can form her bones into different configurations if she gets a good starting kick in the—” He caught his sister’s warning glare. “Pelvis. But it doesn’t work for me. I’m a defective skeleton. A complete nonentity, even among my own kind, which are not exactly live wires. So I’m not sure I’m even worthy of an adventure. But still I wish I could have one.”

Tweeter flew across and landed on his shoulder bone. “Tweet!” he tweeted sympathetically.

“Thanks,” Picka said. He was beginning to like the little bird.

That reminded Picka. “What were you looking for in the crypt?”

Woofer wagged his tail and trotted back to the crypt. The others followed, Joy’nt lingering only long enough to recover her marker paper. The crypt was a large one, with room for them all. It had attracted the dog, who had the nose for adventure. There had to be something.

But Picka hung back. “We can’t be sure what we’ll find in there,” he said. “Maybe the way that stone fell, sealing Woofer in, was a warning.”

That made the others pause. “Yet it was open,” Joy’nt said. “Whatever was inside could have escaped.”

“Woofer says no,” Picka said. He was coming to understand these animals even without the marker paper.

“There should be a plaque on the entry stone,” Joy’nt said. She looked around. “That must be it, fallen to the side. Maybe an ogre slapped at it in passing.”

Picka went to look down at the flat stone. “Danger: Think Tank,” he read.

“The stone is weathered,” Picka said, “but that’s what I read. Maybe it’s an old storage tank.”

“Then why bury it in a crypt in a graveyard?”

Picka shrugged with both his clavicles. “Maybe there’s something dangerous in the tank, like a nest of nickelpedes.”

Woofer tired of the dialogue. He went into the crypt, sniffing for the tank. The others had no choice but to follow, after making sure nothing else could collapse to trap them inside.

There in the back was a large machine with caterpillar treads and a gun barrel. Picka recognized it from descriptions of bad machines in the dream realm.

“I thought those monsters were imaginary,” Joy’nt murmured, awed. “No wonder they buried it.”

“I understand such things actually exist in Mundania,” Picka said. “Maybe this one escaped, got into Xanth, and someone put it away so it couldn’t tear up our landscape.”

“Well, now we know enough about it,” Joy’nt said. “It is indeed dangerous. We’d better bury it again.”

But Woofer was sniffing the tank. He found something on its back. It looked like an on-off switch.