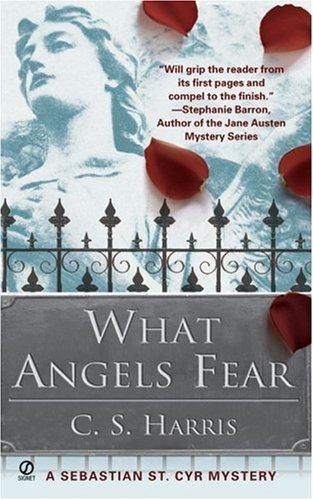 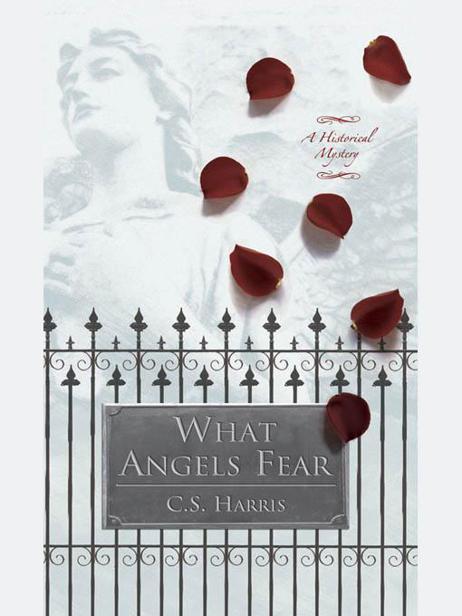 A
New American Library
Book / published by arrangement with the author

This is a work of fiction. Names, characters, places, and incidents are either the product of the author’s Imagination or are used fictitiously, and any resemblance to actual persons, living or dead, business establishments, events or locales is entirely coincidental.

For my husband,
Steven Ray Harris,
for more reasons than I could name

No place so sacred from such fops is barred,
Nor is Paul’s Church more safe than Paul’s Churchyard;
Nay fly to altars; there they’ll talk you dead,
For fools rush in where angels fear to tread.

—Alexander Pope,
An Essay on Criticism

S
he blamed the fog. She wasn’t normally this nervous. This afraid.

It was such a foul, creeping thing, the yellow fog of London. Even without the fog it would have been dark at this hour. Dark, and January- cold. But the murky vapor made it worse, wrapping around her lantern in wraithlike drifts that had Rachel stumbling as she cut across the churchyard.

A loose stone rolled beneath the delicate sole of one kid half-boot, the clatter sounding unnaturally loud in the stillness of the night. Pausing, Rachel threw a quick glance over her shoulder, her gaze raking the faint, mist-shrouded outlines of the graveyard’s scattered monuments and tombstones. From the distance came a clacking rattle and the fog-muffled voice of the charley, calling out the time. Rachel drew in a deep breath of frosty air tinged with the scent of wet earth and leaves and a stale, musty hint of old death, and hurried on.

The heavy stone bulk of St. Matthew of the Fields loomed before her. Rachel clutched the satin-lined velvet folds of her evening cloak more closely about her. She should have told him to meet her at half past eight, she decided. Nine at the latest. It was the usual time, half past eight.

Only, this wasn’t a usual transaction.

She hadn’t expected to be so edgy. It was a sensation she didn’t like. Being nervous made her feel like a victim, and Rachel York refused to play the role of victim. Never again. It was a promise she’d made to herself at the age of fifteen, and in the three years that had passed since that fateful night when she’d seized control of her own life, it was a promise she’d never broken. She wasn’t about to break it now.

At the steps leading up to the north transept door, she paused again. Beneath the deep round arch of the side portal, the darkness was nearly complete. Lifting the lantern high, she let the narrowed beam of light play over the door’s weathered old oak. Through the thin kid of her gloves the iron key felt cold and heavy in her hand. To her annoyance, her fingers shook when she thrust the toothed end into the lock.

With one twist, the mechanism clicked smoothly and the door swung silently inward before her on oiled hinges. The Reverend McDermott was careful about such things. But then, he needed to be.

Rachel pushed the door open wider, one artfully curled lock of golden hair fluttering against her cheek in the sudden outward gush of air. Familiar church smells engulfed her, the scent of beeswax and damp stone and ancient wood. She whisked herself inside, carefully closing the door behind her. She did not lock it.

She dropped the key into her reticule, felt its weight heavy and solid against her thigh as she crossed the transept. The cold silence of the church closed around her, the light from her lantern wavering over candle-blackened stone walls and the scattered, recumbent figures of entombed ladies and long-dead knights lying still and cold in the empty hush.

They said it was close on to eight hundred years old, St. Matthew of the Fields, with molded sandstone arches that sprang from thick, cylindrical piers, and small high windows that now showed only blackness beyond. Rachel’s father had been interested in such things. Once, he had taken her to see the cathedral in Worchester and talked to her for hours about arcades and triforiums and rood screens. But her father was long dead; Rachel shut her mind against the memory, unsure what had brought such a thought to her now.

The Lady Chapel lay at the far end of the apse, a tiny fourteenth-century jewel of white marble and slender columns and delicately carved screenwork. Rachel set her lantern on the steps before the altar. She was early; he would not be here for another twenty minutes or more. The emptiness of the ancient church seemed to press in upon her, cold and dark. She found her gaze returning, again and again, to the blessed candles clustered together on the snowy linen of the altar cloth. For a moment longer, she hesitated. Then, kindling a taper, she began to light the candles, one after the other, their golden flames leaping up warm and bright until they seemed to merge into one comforting glow.

Rachel gazed up at the massive canvas that hung above the altar, a darkly swirled depiction of the Virgin Mother ascending gloriously into the heavens against a background of triumphant angels. Once, Rachel might have murmured a soft prayer.

She didn’t hear the transept door open and close, only the faint echo of stealthy footsteps along the choir. He was early. She hadn’t expected it of him.

Turning, she shoved back the hood of her cloak and forced her lips into a practiced smile, ready to play her role.

She could see him now, a faint shadow, the outline of his greatcoat and top hat just visible through the Lady Chapel’s intricately carved stone screen.

Then he moved into the candlelight.

She took a quick step back. “
You
,” she whispered, and knew she’d made a terrible mistake.

S
ebastian could hear the tolling of the city’s church bells, counting out the hour; dull echoes of sound muffled by distance and the acrid fog that, even here, hugged the open ground and shrouded the bare, reaching branches of the stand of elms that grew at the edge of the field. Dawn had come, but it brought little warmth or light. Sebastian Alistair St. Cyr, Viscount Devlin, only surviving son and heir to the Earl of Hendon, propped his shoulders against the high side of his curricle, crossed his arms at his chest, and thought about his bed.

It had been a long night, a night of brandy fumes and cigar smoke, of faro and vingt-et-un and a promise made to a sad-eyed woman—a promise that he would not kill, however much the man he had come here to meet might deserve killing. Sebastian tipped back his head and closed his eyes. He could hear the sweet call of a lark at the far end of the field and, nearer, the steady swish, swish of wet grass as his second, Sir Christopher Farrell, paced back and forth in the roadside’s verge. Suddenly, the footsteps stopped.

The pacing resumed. Back and forth, boot heels squelching in the damp earth.

“If you’re not careful,” said Sebastian, “you’re going to get mud on your boots.”

“To hell with my boots. Are you certain Talbot is bringing a doctor? How good of a doctor? Maybe we should have brought our own doctor.”

Sebastian lowered his head and opened his eyes. “I don’t intend to get shot.”

Sir Christopher swung about, his fair hair curling wildly in the damp mist, his normally soft gray eyes dilated. “Right. Well, that’s reassuring. Doubtless Lord Firth had every intention of not getting shot when he stood up against Maynard last month. Pity, of course, that the bullet went through his neck.”

“I’m delighted to see I’m amusing you. This is another of those advantages of having gone to war, is it? Staring with calm disdain into the face of death? Ranks right up there with being rendered irresistibly fascinating to members of the fair sex.”

Christopher smiled himself, then resumed his silent pacing, a slim, flawlessly tailored figure in buckskins and high-gloss top boots and well-laundered linen. After another moment, he said, “I still don’t understand why you didn’t choose swords. Less chance of someone accidentally getting killed with swords.” Lifting his left arm in a fencer’s pose, he pantomimed a quick thrust against the cold, misty air. “A neat little pink through the shoulder, a bloody scratch on the arm, and honor is satisfied.”

“Talbot intends to kill me.”

Christopher let his arms fall to his sides. “So you’re just going to stand there and let him take a shot at you?”

“Talbot couldn’t hit a ship of the line at twenty-five paces.” Sebastian yawned. “I’m surprised he chose it.” It was the Code Duello: as the challenged party, Sebastian selected the weapons. But the choice of distance then fell to the challenger.

“Here he comes,” said Sebastian. Straightening, he swung off his driving coat and slung it over the high seat of the curricle.

Christopher turned to stare into the opaque distance. “Bloody hell. Even you can’t see in this fog.”