Read What the Cat Saw Online 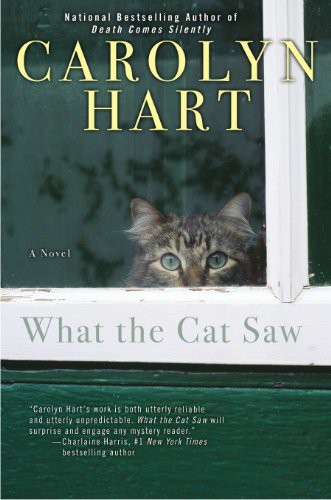 WHAT THE CAT SAW

To Trent and Adrienne with love, always.

O
n the upside, the airport was small. On the downside, a blustery wind took Nela Farley’s breath away as she stepped out of the terminal, pulling her small wheeled bag. She shivered in her light coat. She’d expected cold temperatures, but she’d not expected a wind that buffeted her like a hurried shopper in a crowded mall. She’d also known she wouldn’t be met. Still, arriving in a strange place without anyone to greet her was a reminder that she was alone.

She walked faster, hurried across the double drive to a parking garage. Chloe’s call this morning had been even more fragmented than usual. “…on the fourth level, slot A forty-two. Leland’s car is an old VW, I mean really old. Pink stripes. You can’t miss it.”

In the parking garage elevator, Nela opened her purse and found the keys that had arrived by overnight FedEx from her sister. They dangled from what seemed to be a rabbit’s foot. Nela held it gingerly.
In the dusky garage, she followed numbers, chilled by the wind whistling and moaning through the concrete interior.

She spotted Leland’s VW with no difficulty. Why pink stripes? The decals in the rear window would have been distinctive enough. In turn, they featured a mustachioed cowboy in an orange cowboy hat and orange chaps with
OSU
down one leg, a huge openmouthed bass fish, a long-eared dog with the caption,
My Best Friend Is a Coonhound
, and a gleaming Harley with the caption,
Redneck at the Ready
.

Nela unlocked the driver’s door. Soon she would be off on an Oklahoma adventure, all because Chloe had roared off one sunny California day on the back of her new boyfriend’s Harley, destination the red dirt state. Plus, Nela had lost her job on a small SoCal daily and was free to answer Chloe’s call that she come to Craddock, Oklahoma.

Nela was both irritated with her sister—one more call for a rescue, this time to protect her job—and grateful to have somewhere to go, something to fill leaden days. As for Chloe’s job, she would have been pleased if she’d had an inkling of what to expect, but in her usual fashion, Chloe had spoken of her job only peripherally.

Nela expected she’d manage. It definitely would be different to be in Oklahoma. Everything was going to be new, including subbing at Chloe’s job, whatever it was. Knowing Chloe, the job could be raising guppies or painting plastic plates or transcribing medical records. Only Chloe could hold a job for several months and, despite hour-long sisterly confabs on their cells, always be vague about where she worked or what she did. Nela had a hazy idea she worked in an office of some kind. On the phone, Chloe was more interested in talking about what she and Leland had done or were going to do.
The wind blows all the time, but it’s kind of fun…Hamburger
Heaven really is…There’s a farm with llamas…went to see the Heavener Runestone
… However, she’d promised to leave a packet full of “stuff” on the front passenger seat.

Nela popped her suitcase in the backseat. She breathed a sigh of relief as she slid behind the wheel. Indeed, there was a folder and on it she saw her sister’s familiar scrawl:
Everything You Need to Know
. Nestled next to the folder was a golden box—oh, she shouldn’t have spent that much money—of Godiva. A sticky note read:
Road treats.
Confetti dangled from the rearview mirror. Taped to the wheel was a card. She pulled the card free, opened the envelope. The card showed an old-fashioned derrick spewing oil. She opened it. Chloe had written:
I gush for you. Nela, you’re a life saver. Thanks and hugs and kisses—Love—Chloe

Nela’s brief irritation subsided. She smiled. She wished her little—though so much taller—sister was here and she could give her a hug, look into those cornflower blue eyes, and be sure everything was right in Chloe’s world. So long as she could, Nela knew she would gladly come when her sister called.

She picked up the folder, opened it to find a garage parking ticket, a letter, and a map with directions to I-35.

…turn south. It’s an hour and a half drive to Craddock. They say Hiram Craddock, a rail gang supervisor for the Santa Fe railroad, took a horseback ride one Sunday in 1887 and saw a cloud of butterflies stopped by the river. When the tracks were laid, he quit his job to stay and build the first shack in what later became Craddock. This fall when the monarchs came through, I loved thinking about him seeing them and saying,
This is beautiful, I’ll stay here.
He married a Chickasaw woman. That was real common for white men who wanted to be able to stay in the Chickasaw Nation.
He opened a trading post. Anyway, I don’t know if I explained about staying at Miss Grant’s apartment after she died. I did it as a favor and I know you won’t mind. It’s because of Jugs. You’ll love him. In case your plane’s delayed, there’s plenty of food and water, but the last I checked, your flights were on time. Anyway, it’s sad about Miss Grant but I didn’t mind helping out. Nobody knows you’re coming in today and I didn’t take time to explain but I left a note and said Jugs was taken care of. But they do expect you Monday morning and there are directions in the folder. The key with the pink ribbon is to Miss Grant’s place. Oh, I left my car coat in the backseat. I won’t need a coat in Tahiti! There’s a pizza in the fridge.
Anchovies, of course, for you. (Shudder.) When you get to Craddock
…

Nela scanned the rest of the disjointed message, obviously written in haste. But Chloe could have a day or a week or a month at her disposal and her communications would still careen from thought to fact to remembrance to irrelevance. Nela retrieved Chloe’s map and the ribbon-tagged key. She placed the map on the passenger seat and dropped the key into her purse.

Nela drove out of the garage into a brilliant day. She squinted against a sun that was surely stronger than in LA. Whatever happened, she intended to have fun, leaving behind the grayness now that was LA, and the sadness.

Bill wouldn’t want her to be sad.

O
ccasional winter-bare trees dotted softly rolling dun-colored countryside. Nela passed several horse farms. Cattle huddled with their backs to the north wind. The usual tacky billboards dotted
the roadside. Nela felt more and more relaxed. The little VW chugged sturdily south despite its age. The traffic was fairly heavy and it was nearer two hours when she turned onto the exit to Craddock. After checking the map, she drove east into town, passing red-brick shops, several banks, and a library, and glancing at Chloe’s directions, turned off again to the south on Cimarron. Ranch-style houses predominated. After a few blocks, the homes grew more substantial, the lots larger, the houses now two and three stories, including faux colonials, Mediterranean villas, and French mansards.