Read Wheat Belly: Lose the Wheat, Lose the Weight and Find Your Path Back to Health Online

Wheat Belly: Lose the Wheat, Lose the Weight and Find Your Path Back to Health 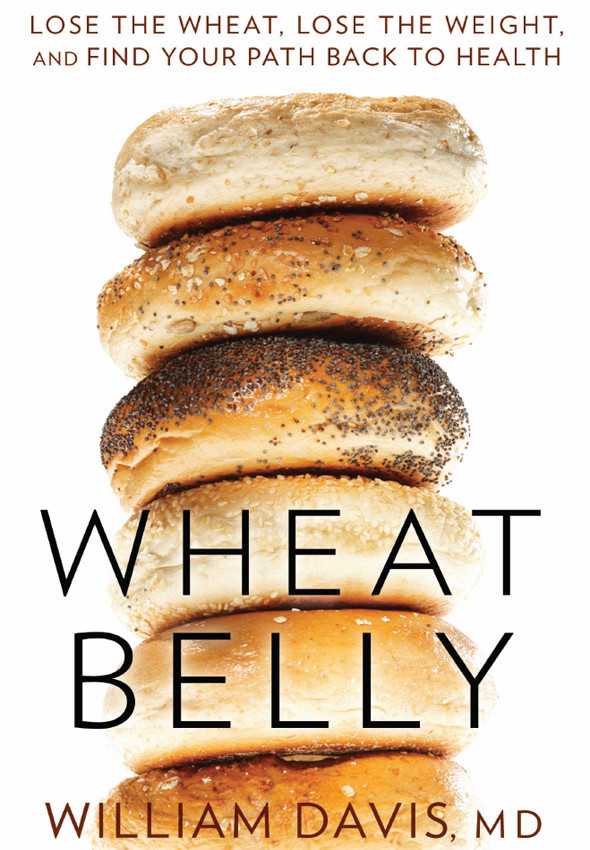 For Dawn, Bill, Lauren, and Jacob,
my companions on this wheat-free journey

Chapter 2 Not Your Grandma’s Muffins: The Creation of Modern Wheat

PART TWO WHEAT AND ITS HEAD-TO-TOE DESTRUCTION OF HEALTH

Chapter 5 Your Wheat Belly Is Showing: The Wheat/Obesity Connection

Chapter 10 My Particles Are Bigger Than Yours: Wheat and Heart Disease

Chapter 11 It’s All in Your Head: Wheat and the Brain

Appendix A Looking for Wheat in All the Wrong Places

FLIP THROUGH YOUR
parents’ or grandparents’ family albums and you’re likely to be struck by how
thin
everyone looks. The women probably wore size-four dresses and the men sported 32-inch waists. Overweight was something measured only by a few pounds; obesity rare. Overweight children? Almost never. Any 42-inch waists? Not here. Two-hundred-pound teenagers? Certainly not.

Why were the June Cleavers of the fifties and sixties, the stay-at-home housewives as well as other people of that era, so much skinnier than the modern people we see at the beach, mall, or in our own mirrors? While women of that era typically weighed in at 110 or 115 pounds, men at 150 or 165 pounds, today we carry 50, 75, even 200 pounds
more.

The women of that world didn’t exercise much at all. (It was considered unseemly, after all, like having impure thoughts at church.) How many times did you see your mom put on her jogging shoes to go out for a three-mile run? Exercise for my mother was vacuuming the stairs. Nowadays I go outdoors on any nice day and see dozens of women jogging, riding their bicycles, power walking—things we’d virtually
never
see 40 or 50 years ago. And yet, we’re getting fatter and fatter every year.

My wife is a triathlete and triathlon instructor, so I observe a few of these extreme exercise events every year. Triathletes train intensively for months to years before a race to complete a 1- to 2½-mile open water swim, a 56- to 112-mile bike ride, and finish with a 13- to 26-mile run. Just completing a race is a feat in itself,
since the event requires up to several thousand calories and spectacular endurance. The majority of triathletes adhere to fairly healthy eating habits.

Then why are a third of these dedicated men and women athletes overweight? I give them even greater credit for having to cart around the extra thirty, forty, or fifty pounds. But, given their extreme level of sustained activity and demanding training schedule, how can they still be overweight?

If we follow conventional logic, overweight triathletes need to
exercise more
or
eat less
to lose weight. I believe that is a downright ridiculous notion. I am going to argue that the problem with the diet and health of most Americans is not fat, not sugar, not the rise of the Internet and the demise of the agrarian lifestyle. It’s
wheat—
or what we are being sold that is called “wheat.”

You will see that what we are eating, cleverly disguised as a bran muffin or onion ciabatta, is not really wheat at all but the transformed product of genetic research conducted during the latter half of the twentieth century. Modern wheat is no more real wheat than a chimpanzee is an approximation of a human. While our hairy primate relatives share 99 percent of all genes found in humans, with longer arms, full body hair, and lesser capacity to win the jackpot at Jeopardy, I trust you can readily tell the difference that that 1 percent makes. Compared to its ancestor of only forty years ago, modern wheat isn’t even that close.

I recognize that declaring wheat a malicious food is like declaring that Ronald Reagan was a Communist. It may seem absurd, even unpatriotic, to demote an iconic dietary staple to the status of public health hazard. But I will make the case that the world’s most popular grain is also the world’s most destructive dietary ingredient.

Documented peculiar effects of wheat on humans include appetite stimulation, exposure to brain-active
exorphins
(the counterpart of internally derived endorphins), exaggerated blood sugar surges that trigger cycles of satiety alternating with heightened appetite, the process of
glycation
that underlies disease and aging, inflammatory and pH effects that erode cartilage and damage bone, and activation of disordered immune responses. A complex range of diseases results from consumption of wheat, from celiac disease—the devastating intestinal disease that develops from exposure to wheat gluten—to an assortment of neurological disorders, diabetes, heart disease, arthritis, curious rashes, and the paralyzing delusions of schizophrenia.

If this thing called wheat is such a problem, then removing it should yield outsize and unexpected benefits. Indeed, that is the case. As a cardiologist who sees and treats thousands of patients at risk for heart disease, diabetes, and the myriad destructive effects of obesity, I have personally observed protuberant, flop-over-the-belt belly fat
vanish
when my patients eliminated wheat from their diets, with typical weight loss totaling 20, 30, or 50 pounds just within the first few months. Rapid and effortless weight loss is usually followed by health benefits that continue to amaze me even today after having witnessed this phenomenon thousands of times.

I’ve seen dramatic turnarounds in health, such as the thirty-eight-year-old woman with ulcerative colitis facing colon removal who was
cured
with wheat elimination—colon intact. Or the twenty-six-year-old man, incapacitated and barely able to walk because of joint pain, who experienced complete relief and walked and ran freely again after taking wheat off the menu.

Extraordinary as these results may sound, there is ample scientific research to implicate wheat as the root cause of these conditions—and to indicate that removal of wheat can reduce or relieve symptoms entirely. You will see that we have unwittingly traded convenience, abundance, and low cost for health with wheat bellies, bulging thighs, and double chins to prove it. Many of the
arguments I make in the chapters that follow have been proven in scientific studies that are available for one and all to review. Incredibly, many of the lessons I’ve learned were demonstrated in clinical studies
decades
ago, but somehow never percolated to the surface of medical or public consciousness. I’ve simply put two and two together to come up with some conclusions that you may find startling.

IT’S NOT YOUR FAULT

In the movie
Good Will Hunting,
Matt Damon’s character, possessing uncommon genius but harboring demons of past abuse, breaks down in sobs when psychologist Sean Maguire (Robin Williams) repeats “It’s not your fault” over and over again.

Likewise, too many of us, stricken with an unsightly wheat belly, blame ourselves: too many calories, too little exercise, too little restraint. But it’s more accurate to say that the advice we’ve been given to eat more “healthy whole grains” has deprived us of control over appetites and impulses, making us fat and unhealthy despite our best efforts and good intentions.