Read When the Nines Roll Over Online

When the Nines Roll Over 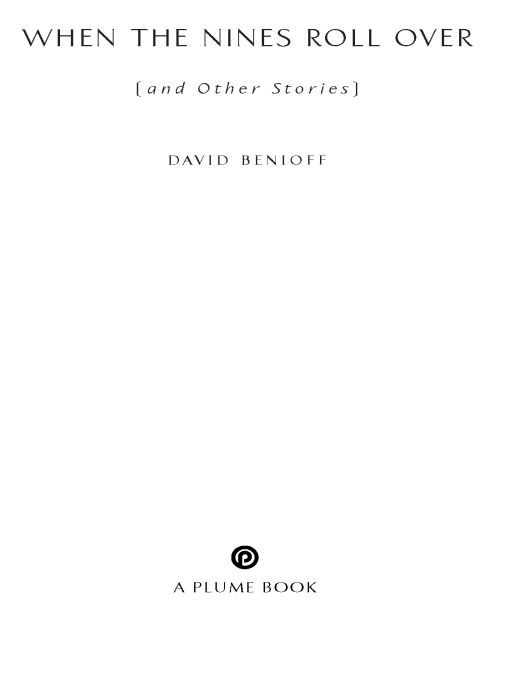 Table of Contents
Title Page
Copyright Page
Dedication
Â
WHEN THE NINES ROLL OVER
THE DEVIL COMES TO OREKHOVO
ZOANTHROPY
THE BAREFOOT GIRL IN CLOVER
DE COMPOSITION
GARDEN OF NO
NEVERSINK
MERDE FOR LUCK
Â
Acknowledgements
A PLUME BOOK
WHEN THE NINES ROLL OVER
DAVID BENIOFF was born and raised in New York City. He adapted his first novel,
The 25th Hour,
into the screenplay for Spike Lee's film of the same name. He is also the author of the screenplays for the films
Troy
and the forthcoming
Stay.
Stories from
When the Nines Roll Over
have appeared in
Best New American Voices
and
The Best American Nonrequired Reading.
He lives in Los Angeles, where he is at work on his next novel.
Praise for
When the Nines Roll Over
“Smart, protean.”
â
The New York Times Book Review
Â
“Mr. Benioff brings a natural prose style and a subtlety of expression . . . Wonderful characterization.”
â
The Wall Street Journal
Â
“The book's eight stories are written with both a literary writer's care and a film writer's instinct for courting his readers or viewers. He hooks them, reels them in and does his best to make them happy to be in the boat with him. . . . His technique is one that works whether it's played out on a page or a screen. It makes you want to know what happens next.”
â
USA Today
Â
“Benioff has put together a diverse, utterly satisfying collection.”
â
Time Out New York
Â
“Demonstrates a devotion to craft, a considerable fund of talent, and a lightness and playfulness.”
â
Books in Review
Â
“Benioff is on a roll. . . . Hip is hard to do, but Benioff can pull it off. . . . This is a superb collection.”
â
Publishers Weekly
(starred review)
Â
“All of these will hook you fast, and keep you hooked. . . . One story,
The Devil Comes to Orekhovo,
is thrillingly good . . . Technical accomplishment that's matched by a generosity of spirit.”
â
Kirkus Reviews
ALSO BY DAVID BENIOFF
The 25th Hour 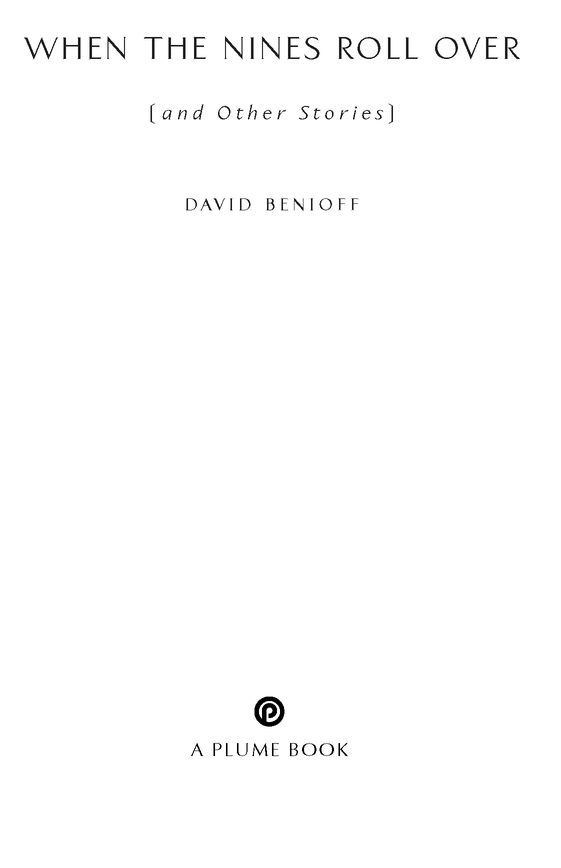 REGISTERED TRADEMARKâMARCA REGISTRADA
The Library of Congress has catalogued the Viking edition as follows:
Benioff, David.
When the nines roll over, and other stories / David Benioff.
p. cm.
eISBN : 978-1-101-17737-2
1. Title.
PS3552. E54425W47 2004
813'.6âdc22 2004049613
Without limiting the rights under copyright reserved above, no part of this publication may be reproduced, stored in or introduced into a retrieval system, or transmitted, in any form, or by any means (electronic, mechanical, photocopying, recording, or otherwise), without the prior written permission of both the copyright owner and the above publisher of this book.
PUBLISHER'S NOTE
This is a work of fiction. Names, characters, places, and incidents are either the product of the author's imagination or are used fictitiously, and any resemblance to actual persons, living or dead, business establishments, events, or locales is entirely coincidental.
The scanning, uploading, and distribution of this book via the Internet or via any other means without the permission of the publisher is illegal and punishable by law. Please purchase only authorized electronic editions, and do not participate in or encourage electronic piracy of copyrighted materials. Your support of the author's rights is appreciated.
BOOKS ARE AVAILABLE AT QUANTITY DISCOUNTS WHEN USED TO PROMOTE PRODUCTS OR SERVICES. FOR INFORMATION PLEASE WRITE TO PREMIUM MARKETING DIVISION, PENGUIN GROUP (USA) INC., 375 HUDSON STREET, NEW YORK, NEW YORK 10014.

For Amandaâ
I love you.
WHEN THE NINES ROLL OVER
SadJoe is a punk rocker, he rents by the week
and if his landlord ups the rent he'll be living on the streets
he's never had a run of luck, deuces load his deck
his rottweiler's name is Candy and she's tattooed on his neck
his girlfriend sells tickets at the Knitting Fac-to-ry
she gets him in to see the bands and every band for free
so raise a glass for SadJoe, for SadJoe raise a glass
he's going, going, going gone but going with a blast!
The singer had presence. She wasn't a beauty, and her pitch was imperfect, but she had presence. Tabachnik watched her. Lord, the girl could yell. From time to time he surveyed the young faces in the crowd. The way the kids stared at herâthe ones in back jumping up and down to get a better lookâconfirmed his instinct. The girl was a piggy bank waiting to be busted open.
Tabachnik and a foul-smelling Australian stood by the side of the stage, in front of a door marked REDRÃM STAFF ONLY! Most of the kids in RedrÃ¼m were there to see the headliners, Postfunk Jemimah, but the opening act, the Taints, was threatening to steal the show. There was no slam-dancing or crowd-surfing or stage-divingâeverybody bobbed their heads in time with the drummer's beat and watched the singer. She prowled the stage in a bottle-green metallic mesh minidress so short that Tabachnik kept dipping his knees and tilting his head to see if he could spot her underwear. He could not spot her underwear.
When the band finished the song Tabachnik turned to the Australian and asked, “What's that one called?”
The Australian had recently started an independent label called Loving Cup Records. The Taints were the first band he signed. His head was shaved and his black tracksuit stank of sweat and cigarette smoke.
“It's good, huh? âBallad of SadJoe.' SadJoe's the drummer. He started the band.”
“Who writes the songs?”
“Molly,” said the Australian, pointing at the lead singer. “Molly Minx.”
She didn't look like a Molly Minx. Tabachnik wasn't sure what a Molly Minx should look like, but not this. He guessed that she was Thai. Her hair was cropped close to the scalp and bleached blond. A tattooed black dragon curled around her wrist.
“The story is,” continued the Australian, “she has a big crush on SadJoe, and she writes this song, and one night she sings it to him. Right on the street, a serenade. So, you know, love. Boom. And he asks her to join the band.”
Tabachnik had never heard of the Australian before tonight, which meant that the Australian did not matter in the music business. Whatever contract Loving Cup Records had with the band would be a mess, whipped up one night by a cocaine-addled lawyer who passed the bar on his third try. That was Tabachnik's guess, anyway, and he was generally right in these matters.
Making money off musicians was so easy that third-rate swindlers from all over the world thought they could do it; they swarmed around talentless bands like fat housewives around slot machines, drinking cheap beer and exchanging rumors of huge payoffs. Third-rate swindlers were doomed to serve as rubes for second-rate swindlersâunless they were unlucky enough to get conned by a true pro.
After the Taints finished their set Tabachnik retreated to the VIP room with the Australian. He expected the man to light a joint and offer him a hit; when it happened Tabachnik shook his head and took another sip of mineral water.
“I got you,” said the Australian, leaning back in the overstuffed sofa. He sucked on the joint and kept the smoke in his lungs for so long that it seemed as if he had forgotten about the exhale part. Finally he released the smoke through his nostrils, two plumes curling toward the ceiling. It was an impressive gesture and Tabachnik appreciated itâAustralians were always doing shit like thisâbut it was meaningless. He wasn't going to deal with Loving Cup unless it was necessary, and at this point he doubted it would be.
“I got you,” repeated the Australian. “You want to keep a cool head for the negotiations.”
“What negotiations?”
The Australian smiled craftily, inspecting the ash at the tip of his joint. He had told Tabachnik his name. Tabachnik never forgot names, but in his mind the Australian was simply “the Australian.” He was sure that he was simply “major label” in the Australian's mind, but eventually he would be “that fuck Tabachnik.”
“Okay,” said the Australian. “Let's just talk then.”
“What should we talk about?”
“Come on, come on. Let's quit the gaming. You're here for the band.”
“I don't understand something. You've signed Postfunk Jemimah?”
The Australian squinted through the haze of smoke. “The Taints.”
“So what are we talking about? I'm here for Postfunk Jemimah.”
“You like the Taints,” the Australian said, wagging his finger as if Tabachnik were a naughty child. “I saw you checking on the crowd. Well, you want them?”
“Who?”
“The Taints.”
Tabachnik smiled his version of a smile: lips together, left cheek creased with a crescent-shaped dimple. “We're having a conversation here, but we're not communicating. I came to see Postfunk Jemimah.”

Mistress of the House by Eleanor Farnes
Evening in Byzantium by Irwin Shaw
Empyrion I: The Search for Fierra by Stephen Lawhead
Dark by Erin M. Leaf
The Hordes of Chanakra (Knights of Aerioch) by David L Burkhead
Witch Fall by Amber Argyle
Castle Orchard by E A Dineley
Transit by Abdourahman A. Waberi
The Lost Heart of Asia by Colin Thubron
By the Sword by Flower, Sara
Our partner