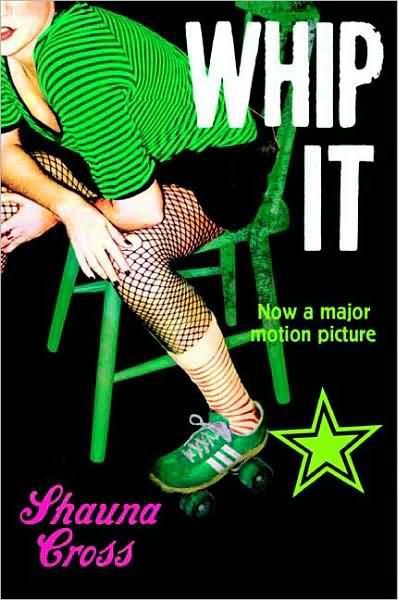 Square Fish and the Square Fish logo are trademarks of Macmillan and are used by Henry Holt and Company under license from Macmillan.

Summary: When sixteen-year-old rebel Bliss Cavendar, who is miserable living in a small Texas town with her beauty pageant-obsessed mother, secretly joins a roller derby team under the name “Babe Ruthless,” her life gets better, although infinitely more confusing.

Designed by Amelia May Anderson

To any & all misfit girls,
this one’s for you.

I
don’t know how it happened or what sort of backroom deal went down, but apparently I’m living in a small Texas town with two culturally clueless impostors for legal guardians, when I just know my real parents are out there somewhere. They’re probably these supercool artist types with a loft in New York. Or maybe they’re in San Francisco. That would work too. I’d take San Fran over this cow-patty town any day.

P.S. If you aren’t my real parents and you happen to find this note (and you are hip and childless), I urge you to consider the wonderful world of adoption.*

* Adoption offer good only for those living in a cool city. Cool city to be determined by adoptee.

I wrote that on a note card last spring when I was forced to participate in an oh-so-lame balloon release at school (don’t ask). So far, I’ve had exactly zero responses, but I’m keepin’ hope alive.

Hope is pretty much the only way to survive Bodeen, Texas. Unless, of course, you’re a football-throwing, truck-worshipping, country-music-listening hick. Then, naturally, Bodeen is your soul mate of a town. Yay, you.

But if you happen to be an indie-rock-loving, thrift-store-prowling, homemade-T-shirt-wearing, blue-hair-dying misfit girl who thinks life is a ’60s movie, then Bodeen can be, and often is, one giant ball of suck.

Ah, beautiful Bodeen, home of the unironic mullet and the “world-famous” Bluebonnet ice cream factory. The frozen yum-yums are produced locally, and people travel far and wide just to get a glimpse of the ice cream makin’ in action. Honestly, the process is about as riveting as golf on Saturday TV, but the tourists
ooh
and
ahh
like it’s a freakin’ religious experience, like the rocky road they’re munching on isn’t the exact same crap they can buy by the gallon at their local Piggly Wiggly.

By the way, when I say tourists, I don’t mean to imply Bodeen is a mecca for world travelers or anyone remotely interesting, i.e., crushworthy boys. The whole ice-cream-factory-as-vacation-destination thing doesn’t really speak to that demographic. Believe me, I have done my research on this one. I have spent countless hours watching tour bus after tour bus unload, desperately hoping for a glimpse of male cuteness among the fat-ass, fanny-pack parade—it never happens. You will see Jesus skateboarding the streets of Bodeen before a hot guy ever wanders across the county line.

And if that isn’t enough, Bodeen has somehow become synonymous with “romantic getaway for two,” which means other people’s parents drag their sad relationships out here for a little weekend “rekindling.” They check into one of our
charming
bed and breakfasts and get busy doing whatever it is parent folk do when surrounded by grandma wallpaper, doily curtains, and the scent of fresh-baked muffins (cringe factor high!).

Every Friday night, when these couples descend on my little town, I think,
Somewhere scattered across Texas are a bunch of teenage boys whose parents left them alone for the weekend.
And I think there must be one boy, one witty, music-obsessed cutie, who could really appreciate a girl with blue hair and an impressive CD collection . . . and I think,
Why aren’t I with him? I SHOULD BE THERE WHILE HIS PARENTS ARE HERE.

It hurts. It really does.

Little House on the Scary

S
o, you might as well know my name is Bliss Cavendar. God, just saying it out loud makes me want to hurl. The Bliss part is particularly cruel, considering I haven’t experienced any (unless you count my banana Laffy Taffy obsession—but that only takes a girl so far). Obviously, my nutso mother was expecting a tap-dancing ray of sunshine when she was shopping for baby names. Instead, she got me. Surprise. No tap dancing, no sunshine.

To make matters worse, Brooke (my alleged real mother) suffers from a rare but raging illness: addiction to beauty pageants. Tiara-ism, I like to call it. Apparently Brooke was a major hottie back in her day, winning a slew of titles, crowns, and sashes, including the local end-all, be-all crown, Miss Bluebonnet. My grandmother and great-grandmother were also Miss Bluebonnets.

Unfortunately for Brooke, Miss Bluebonnet wasn’t enough. She hungered for, but never quite made it to, the pageant big leagues, a fact that has fueled her epic,
Lord of the Rings
style quest to ensure that her child wins the ultimate crown. Yep, Brooke decided that if she couldn’t be a Miss America herself, she would be the proud mother of a Miss America. That’s where I come in, victim #1.

I spent my formative years participating in one rhinestone torture-a-thon after another (I was so naive then). Brooke would tease my stringy hair skyscraper high and spackle on so much makeup that, I swear to God, you could see it on satellite photos from space. I never won anything more than “Certificate of Participation,” which is pageant-speak for “big-ass loser.”

But that didn’t stop Brooke, who does not let little things like reality get in her way when she is doggedly pursuing a goal. She hooked me up with a coach, and on my thirteenth birthday, I debuted a new talent routine that was supposed to propel me to the title of “Little Miss Howdy-Roo” in the nearby town of Dripping Springs.

You have to believe me when I tell you I gave that damn baton everything I had. I twirled, whirled, and step-ball-changed like my life depended on it. But the hairspray made me dizzy, and somewhere in the middle of my showstopping finale, the choreography gods took a smoke break and left me hangin’. The baton ricocheted off my cartwheeling foot, sailed into the audience, and coldcocked judge Darla Schaffer right upside the head. Well, you can’t say it wasn’t a showstopper. It took Mrs. Schaffer five minutes to regain consciousness.

On the rainy drive home, as I clutched yet another “Certificate of Participation,” Mom kept saying, “It’s okay, sugar. We just gotta nail that finale and we’re golden. You don’t get to be Miss America by giving up, you know.” But I did know, and I was over it. Two weeks later, I launched a Gandhi-inspired hunger strike and finally secured freedom from my mother’s pageant cult. Sort of.

She still expects me to compete in Miss Bluebonnet in December—a painful fact I try to keep buried way, way in the back of my mind. I consider it the final stop on my long and completely unsuccessful pageant train ride.

Meanwhile, Mom turned her Miss America sights on my little sister, Shania (another bad but very pageant-friendly name), who just turned . . . drumroll please . . . four years old. I call my angelic little sis Sweet Pea because I find her Brooke-given name too repugnant to utter out loud. Plus, when Sweet Pea grows up and looks back on her childhood, I want her to know I was fighting the good fight on her behalf.

The strange thing about Sweet Pea, the four-year-old pageant queen, is that she really seems to love competing. She never cries or threatens to run away when Brooke teases her hair. And, get this, the kid actually squeals with delight when she gets to wear that abominable piece of bedazzled cotton candy pretending to be a dress. Maybe that’s why she always wins. She’s Brooke’s pageant dream come true.

Sometimes I feel guilty, like I should be protecting Sweet Pea from my mom’s cult (being a survivor, and all). But, at the same time, I’m grateful because my little sis brings home the trophy bacon like I never could, which keeps Brooke off my back. And my motto is, the less Brooke in my life, the better.

Of course this JC Penney family portrait wouldn’t be complete without mentioning my pa, Earl Cavendar. Here’s all you need to know about good ol’ Earl. The Cliffs Notes if you will. He owns Longhorn Furniture (home of the world’s ugliest sofas), says maybe three words a day, and usually falls asleep in his maroon velour (“melour”) La-Z-Boy after the football report. Earl knows he’s no match for the Texas Twister he married and has adopted a cunning survival tactic: He does exactly what he’s told and stays the hell out of Brooke’s way.

D
espite the staggering odds against me, I have managed to find the best friend a small-town weirdo girl like me could ever hope for: the one, the only, Pash Amini. Last year, when I was dying from boredom (I’m talkin’ ICU—it did not look good), Pash moved to town and nursed me back to social health.

She wasn’t in the school forty-five minutes before she hunted me down at my locker. She fearlessly approached, tossing all new-girl-in-school rules blithely to the side.

I took one look at her ’50s pencil skirt and homemade skull earrings while she silently graded my tuxedo-striped Dickies and ’70s “Hopscotch for Jesus” T-shirt. It was best friend love at first sight.

Not only is she hilarious and crazy smart (straight As, honors everything), but Pash is the most beautiful Arab-American bombshell this side of the Pecos River. The
only
Arab-American bombshell, she would remind me. Naturally, Pash’s exotic gorgeousness has yet to receive the props it deserves from the knuckle-dragging idiots at Bodeen High. I know her pain. Not that there are any lads worth swooning over, but it would be nice to be admired. Secretly admired, even.

It’s the height of summer and a thousand and two degrees in the blistering August heat, just a friendly reminder that Bodeen, Texas, really is hell. Pash and I wander through town enjoying our last half hour of freedom before we clock in at The Job So Awful We Dare Not Speak Its Name (TJSAWDNSIN).