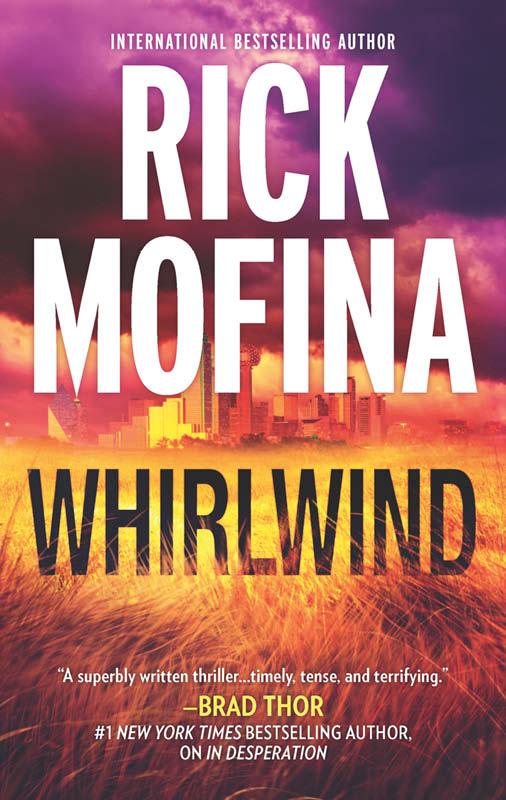 An anguished mother loses her baby in a deadly storm…

A kind stranger helps Jenna Cooper protect her baby boy when a killer tornado rips through a Dallas flea market. But in the aftermath, Jenna can’t find her son or the woman who’d been holding him.

A journalist under pressure breaks the story…

Upon discovering the tragedy, reporter and single mom Kate Page, battling for her career and trying to hold her life together, vows to determine what happened to tiny Caleb Cooper.

A vortex of life-and-death forces

As the FBI launches an investigation amid the devastation, Kate uncovers troubling clues to the trail of the woman last seen with the baby—clues that reveal a plot more sinister than anybody had imagined. Against mounting odds, Kate risks everything in the race to find the truth…before it’s too late.

Praise for the novels of Rick Mofina

“This is a one-day read (most likely a two-to-four-hour
read,
depending on how fast your eyes can soak all this in),
but with
the exciting plot and a conclusion that is a true surprise
to one and all,
this is one book that has to be seen ASAP.”
—
Suspense
Magazine

“Mofina is one of the best thriller writers in the
business.”
—
Library Journal
(starred
review)

“A blisteringly paced story that cuts to the bone.
It left
me ripping through pages deep into the night.”
—James Rollins,
New York Times
bestselling author

Other books by Rick
Mofina

To the memory of John Gradon

The clouds poured out water; The skies sent out a sound; Your arrows also flashed about. The voice of Your thunder was in the whirlwind;
The lightnings lit up the world; The earth trembled and shook.
—
Psalms
77:17–18

D
eath was near but Jenna Cooper was not aware.

Like the thousands of other people at the Old Southern Glory Flea Market, in the southeastern part of the Dallas– Fort Worth Metroplex, she was hunting for bargains.

Jenna liked coming here. With more than nine hundred vendors in buildings and open-air sections spread over forty acres at the Hawn and LBJ freeways, Old Southern was one of the biggest flea markets in Texas.

Whatever Jenna needed, she could always find a deal on it.

“Can I make you an offer on these?”

Jenna touched the folded baby clothes she’d selected and piled on the vendor’s table. The fleece hoodie, the footed pajamas, a romper, T-shirts, bibs, the lace tops and the skorts, which were so cute.

The vendor was wearing a Cowboys
ball cap, rose-tinted sunglasses and a T-shirt that read: Verna’s Clothes for Kids. Jenna guessed her to be in her late sixties.

Jenna figured the clothes would cost fifty to sixty dollars if she were to buy them new. But the items, as tagged on the table, would run about thirty-five dollars. She was not very good at negotiating, but these days she had no choice. For her, Blake and the kids, money was an issue.

“Would you take twenty-five for all of them?”

The woman took stock of Jenna’s daughter, who was holding on to the stroller where her baby brother was waking up from a nap.

“How old are your little ones?” she asked, weighing Jenna’s offer.

“All right, dear, for you and your angels, twenty-five.”

“Thank you.” Jenna handed her the cash from her wallet.

While the vendor rummaged under the table for a bag, the old transistor radio hanging from her wooden sign that also read Verna’s Clothes for Kids, crackled faintly with an updated weather report.

But few people were listening about the possible tornado watch.

The sky was overcast with flashes of lightning on the horizon. It was hot and humid. Jenna pressed the back of her hand to her moist forehead then checked on Caleb. He was going to be hungry and she’d have to find a place to feed him. She gave Cassie a sip of bottled water, intending to finish shopping and get home before it rained.

Jenna’s attention shifted to the end of the table, where another woman had stopped browsing to pay her the compliment. She was about Jenna’s age, mid-twenties, with short spiky red hair and a nice smile.

“And—” the stranger nodded to the stroller “—I overheard, your baby boy’s five months old?”

“May I?” The woman stepped closer, lowering herself to Caleb’s stroller. “Oh, he’s brand-new! What a sweetheart!”

“Here’s your bag,” the vendor said to Jenna.

“Thanks.” She reached out for it.

“Who does he take after?” The stranger stood.

For the first time, Jenna noticed a man at the other end of the table. He seemed about the same age as the woman and by the way he was watching, appeared to be with her.

“Thank you.” Jenna stowed the clothes in the stroller’s basket.

That woman was right, Jenna thought, while making her way through the bustling market. Jenna was blessed, but this past year had been hard for her family. A week after she’d learned that she was pregnant, Blake was laid off from his ground-crew job at DFW International Airport. As weeks and months passed, Blake took any work he could find. He’d come home, hands callused from a long day on a construction site, or he’d fall asleep in front of the TV after a day making dozens of deliveries as a courier. But that was all low-paying, temporary work.

Jenna was a part-time teller and worked as many hours as she could before she was due. They were burning through the little savings they had, and she feared they would lose their home, right up until six weeks ago. That’s when Blake was hired by American Journey Movers. It was full-time, and luckily there were health benefits, which helped when she had Caleb.

The downside was that Blake was always on the road. He started in Florida one week then was in Minnesota the next. Thankfully, Jenna’s sister, Holly, came in from Atlanta for two weeks when Caleb was born, because the day after Jenna brought him home from the hospital, Blake was on the road again to Kentucky and Virginia.

Now he was in Alaska.

“You’ll tough it out, Jen,” Blake would tell her. “You’re not a quitter. We’ll get through this. Look at all we’ve faced so far.”

He was right, and she was grateful. Things were turning around for them. She had a healthy baby boy and a beautiful daughter. Blake had found a good job. It was true, she was blessed. They’d kept their house and were clearing their debts.

To help with their finances, Jenna was trying to get a data-processing job that would let her do extra work at home. She was also careful with money, never spending beyond their budget. That’s why she had buckled Cassie and Caleb into the family’s ten-year-old Ford Focus and come here.

But before heading out this morning, she’d hesitated. The forecast had called for a slight risk of severe weather later this afternoon. Standing in her driveway, she thought the sky looked fine, and she planned to be home by early afternoon. Besides, she needed to get some things now, and this was the best time for her to go.

They’d had good luck so far, Jenna thought, as she maneuvered through the crowded market lanes. Along with the baby clothes, she’d bought towels and bedsheets for a steal. They had factory flaws that weren’t even noticeable. Now she needed a desk lamp. She’d spotted one priced at two dollars. The same one in the store was going for fifteen.

Caleb was starting to fuss. Jenna needed to feed him but wanted to get the lamp first. She was trying to recall the row where the lamp was when she felt the first raindrop.

Then a wind kicked up some papers and dirt. Vendors began throwing tarps and plastic sheets over their wares, others unrolled canvas walls. Jenna unfolded the canopy on Caleb’s stroller, got Cassie into her rain jacket and opened her umbrella just as the downpour started.

Hunched against the rain they hurried to take cover under the tent roof of a large picnic area. They crammed in with other shoppers just as hail in golf-ball-sized chunks smashed into the ground, pelting the roof with such ferocity Jenna feared it would tear through.

“Mommy I’m scared!” Cassie slid her arms around her.

Jenna pulled her closer and tightened her grip on her stroller. She bit her lip watching the storm and lightning, regretting not leaving earlier.

Jenna felt Cassie’s little face nodding against her as the hail relented.

Jenna’s head snapped to a man in the gathered crowd with his cell phone pressed to his ear. “Baby!”

Others under the canopy turned to a woman as she said, “For real?” into her cell phone.

“Baby.” The man was staring helplessly at the sky, then at his phone. “I can’t hear you!” Then to the rest of the group he said, “My wife’s east of Lancaster. She said a tornado hit, then her phone died.” He flipped up his hood. “I gotta find her. Y’all better take cover!”

As if on cue, a siren wailed. Jenna knew that sound. The city had about a hundred warning sirens throughout Dallas and tested them once a month.

Only this one was not a test.

The steady signal was an alert to seek immediate shelter.

A massive wall of black cloud in the shape of a wedge had suddenly risen in the west where the sky had turned an otherworldly shade of green. All the saliva in Jenna’s mouth suddenly evaporated as she fought to contain the wave of panic rising in her gut.

“My God!” an old man said, adjusting his glasses as he pointed to the sky. “That’s a school bus spinning up there, hundreds of feet in the air!”

Crushing Cassie to her, Jenna whispered a prayer.

Kur of Gor by John Norman
Torn Away by James Heneghan
The Carhullan Army by Hall, Sarah
Simplicity Parenting by Kim John Payne, Lisa M. Ross
Tales from the Nightside by Charles L. Grant
Visiones Peligrosas III by Harlan Ellison
The Reluctant Journal of Henry K. Larsen by Susin Nielsen
Dying Bad by Maureen Carter
One Day His (The Someday Series Book 2) by Shawn, Melanie
The Billionaire Game by Monroe, Lila
Our partner