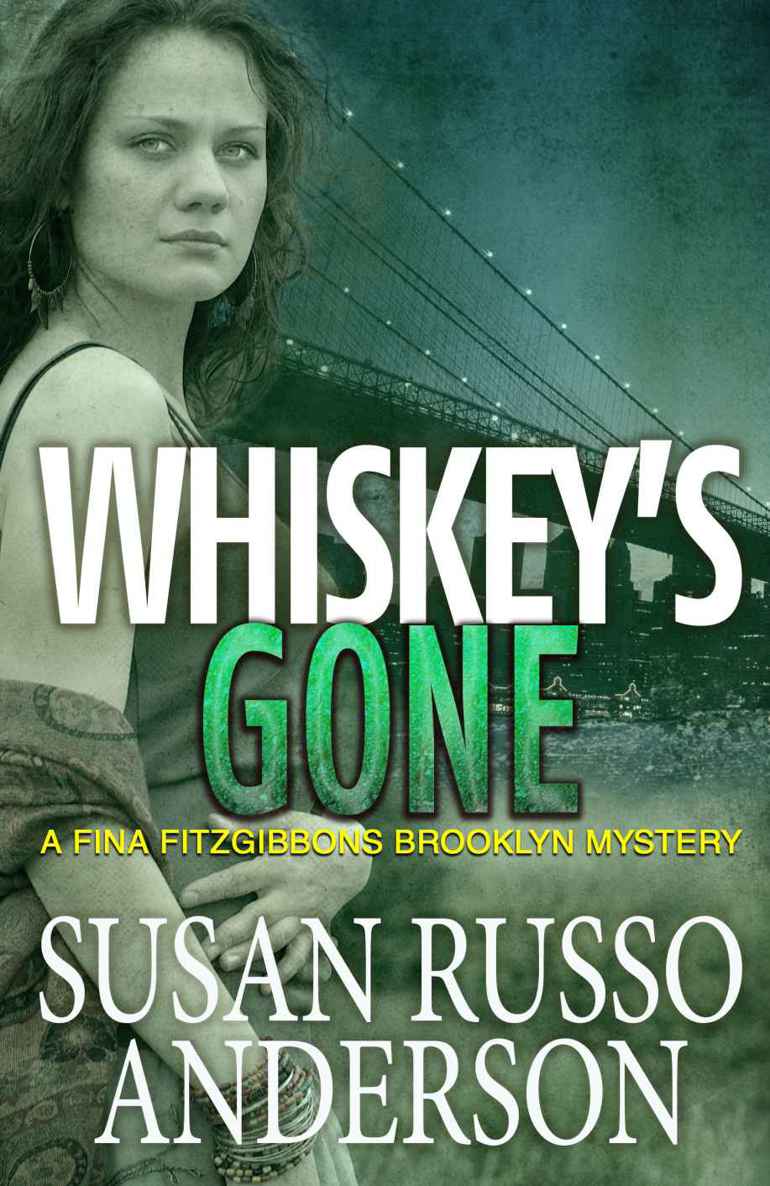 Pressed Against the Sill

The Day I Met Arthur

A Visit with Seymour

Hope Is the Thing with Feathers

Private investigator Fina Fitzgibbons gets a call from Brooklyn Heights lawyer Trisha Liam asking her to find Whiskey Parnell, Trisha’s office manager. During the hunt, Fina steps on the toes of Detective First Grade Jane Templeton and resists falling in love with her boyfriend, NYPD Patrol Officer Denny McDuffy. She interviews named partners, artists and painters. Her quest for the missing single mom takes Fina and her friends to Dumbo, Carroll Gardens, Coney Island, and Brighton Beach. But in the end, a vicious surprise awaits her as the final piece of the puzzle comes crashing down.

Whiskey’s Gone
is a work of fiction.

Names, places, and incidents are either products of the author’s imagination

or are used fictitiously. Any resemblance to persons living or dead

Readers, I’d love to hear from you:

For My Parents, Toni & Jim Anderson

Hope is the thing with feathers—
That perches in the soul—
And sings the tune without the words—
And never stops—at all—
And sweetest—in the Gale—is heard—
And sore must be the storm—
That could abash the little Bird
That kept so many warm—
I've heard it in the chillest land—
And on the strangest Sea—
Yet, never, in Extremity,
It asked a crumb—of Me.

Seriously? He was such an abscess. “Why are you calling at this hour?”

“I didn’t know where else to turn. They’ve taken her.”

Whiskey thought her head was going to explode. Maybe it would. Or maybe she’d inherited that sudden death thing from the father she never knew. Or an artery would give way and she’d drown in her own blood. Maddie would find her body on the floor. Her heart pounded. “I don’t see what I can do. I can’t leave my daughter.”

“They came and trashed the apartment and took my wife.”

His intake of air sounded like the rattle of a snake. “You don’t understand, I think I know where she is. I can get to her, but I need your help. She admires you. You can persuade her to come home. I … didn’t mean to hit her. I don’t know what to do. I think she’s still alive. At least she was breathing when they grabbed her. You’ve got to help me.”

“By the time I get to your house—”

“You don’t understand; I’m downstairs. You’ve got to help me. Please. For us. For all we’ve meant to each other over the years. You can persuade them to give her back. I know you can.”

This time his voice was a low growl. “You still don’t get it. I’m downstairs. I’m going to come up there and shoot you and the goddamn kid if you don’t come down here now.”

When Trisha Liam called me, my clothes took on a different electricity as I listened to the raw edge in her voice.

“My office manager didn’t show up today, and she’s usually the first to arrive. This isn’t like her. Something’s terribly wrong.”

“And?” I asked, just to make sure we were clear. You’ve got to do that with lawyers.

“And I need you to investigate. Your retainer’s on my desk, and yes, I’ll sign your contract. Just get over here right away.”

After the episode with her daughter three months ago, Trisha Liam had made hefty changes to her lifestyle, prompted, no doubt, by a massive shake-up in her soul. For starters, she now paid full and loving attention to Brandy, even attending Packer Collegiate’s parents’ nights, according to my sources. And second of all, she moved her law firm from the Wall Street area to a brownstone a few doors away from her townhouse in the Heights so she could be closer to Brandy’s school.

It didn’t take me long to drive there, but parking was another matter, the usual Brooklyn comedy routine. I was about to give up when I spied the familiar red of backup lights two blocks away, so I gunned the motor and squeezed into a spot inches from the yellow curb, barely fitting, but only because my Beretta’s back bumper touched the front fender of the car behind me. As I locked up, I pictured Denny in his uniform, arms crossed, mouth set in a tight smirk. Despite the vow that I’d never ever lose myself over anyone, I texted him, half of me not expecting a reply, not from where he was with his buddies, a cabin deep in the Maine woods.

When Trisha Liam opened her door, she looked almost the same as the last time I’d seen her, like a sawed-off pencil in a pantsuit. Today, however, her face had a warmer, less lined look. She actually hugged me before she led me down the block to the new digs of Liam, Trueblood & Wolsey.

“How’s Brandy?” I asked as we walked the short distance.

“Being Brandy.” Trisha Liam’s face took on a proud, motherly glow. I remembered seeing it on my mom whenever she looked at me, and mid-stride, a fierce ache swept through me.

The lawyer stopped. “But now that you ask, she’s been having nightmares. You know, because of her ordeal. It’s too early to see much progress, but the doctor thinks she’ll be fine.”

Shrinks. They manage to create optimism with an edge. I nodded. Brandy had been through a lot, and although I didn’t really understand kids or their needs, we had developed a rapport.

“Her grades are fine, and she hangs with her usual crowd. I think they talk about what happened to her, which helps. She doesn’t confide in me.” Trisha Liam looked down at the sidewalk. “But that’s changing. Slowly. And something else. For no reason, she begins crying—in the store, in the middle of her favorite TV series, in class, too, her teachers tell me. The doctor says it will take time.”

I’ll bet she does. I listened to leaves crunch underneath our shoes. In a few minutes, we climbed the stairs of another Greek revival. Inside there was a substantial entryway with one of those old-fashioned rock-crystal chandeliers, the kind that swing back and forth whispering money.

On one side of the hall was a door leading to a large room “for staff and guests,” Trisha told me. I peeked in. It was furnished with expensive drapes. Overstuffed chairs were arranged around a fireplace. There were a couple of laptops and small desks scattered about. On the far wall was a wet bar.

“We call it the clients’ reception, and you’re welcome to come here and do whatever it is investigators do. Don’t they sit and ruminate for hours about their cases?”

Across the entryway was another massive room, this one filled with people working. As we made our way up the aisle to Trisha Liam’s office tucked into the back corner, she nodded to the staff, men and women on the phone or murmuring to one another or clicking keys. Except for the receptionist. She wore a pair of earbuds and seemed to be deep inside herself. Cracking gum, she stared hard at her screen, one manicured nail gently tapping on her mouse. Maybe she was hiding from us, or maybe that’s what she did while waiting to pick up the phone.

“Any word on Whiskey?” someone asked.

A wooden desk by the window was vacant. Something about the stillness around it told me it was the missing office manager’s. I walked past, and a shiver swept through me. If Cookie were nearby, she would tell you how I, Fina Fitzgibbons, having been plunged into wizardry at birth, had a weirdness about me when things weren’t right. And although it was too early to call it a disappearance, I knew there was something not right about the office manager’s absence.

Trisha Liam closed the door, and I glanced at the view spread before us. The early afternoon’s crisp rays bounced off the East River, the Statue of Liberty shining in the distance, Manhattan’s old seaport glinting across the water. I bit down the desire to be successful, because if I were, I wouldn’t want to live in any other place but this.

“Tell me about … what did you say her name was?” I asked, after we were both seated.

That was a pointless remark—Trisha Liam’s not the joking type. “When was the last time you saw her?”

Trisha Liam’s irises slid to the right. “No, I left before she did. She was still sitting at her desk as I was leaving, the only other person in the room. She looked up when I said goodnight, but I could tell she was engrossed in something on her screen. She’s usually the last one to leave. As I walked through the office, I think she mumbled a goodbye or flapped her arm in my direction.”

“Why would we?” She paused. “Well, we would have, of course, if we’d had business to discuss. Every now and then I make it a point to show I’m interested in their lives, so I make small talk, but I’d done that with Whiskey last week.”

“You’re not making this easy. I know what you think of me, that I’m a cold-hearted lawyer. But Whiskey and I weren’t friends, not even close business associates.”

“You mean you never ‘shared.’” I knew I was being a hard-ass, even though Trisha Liam had changed.

“Look. I’m not a mother hen. I’m not a chum. I know I need to be more human, and I’m working on it, but Whiskey and I are so different. I admire her. She never makes a mistake, not one, keeps the office running, and I don’t know how we’d replace her. This is a small office. Each of us plays a big part in creating the right atmosphere. She’s the best we have.”

“How long has she worked for you?”

“Two years ago, she became the office manager. Well, she functioned as the manager from the start, long before she had the title. She’s been here about five years now. Knows all the others. They admire her. She lends a certain brightness to the place. Whiskey’s always laughing, and her work is immaculate.” She stopped talking and stared at her hands. “But that’s all you’ll get from me. Facts about her? If they’re not in the file, you’ll have to ask the others.”

She shoved a manila folder in front of me, and I took my time going through it, even though it was thin. There was a five-by-seven card with a headshot of a woman stapled to it. Judging from the photo, she was about my age, maybe a few years older, sporting brown curls and a turned-up nose maybe a fraction too long. There was humor, intelligence, wistfulness. I’d never seen her before, but I felt like I’d known her all my life. As I gazed at her, I felt that earlier chill travel up me again. It was as if the camera had captured Whiskey’s fate, an invisible shroud cloaking her, an aura of doom in the shadows of her smile.

Cheryl Holt by Total Surrender
The Devil's Closet by Stacy Dittrich
Under His Domain by Kelly Favor
Saxon Dawn (Wolf Brethren) by Hosker, Griff
Melody Bittersweet and The Girls' Ghostbusting Agency: A laugh out loud romantic comedy of Love, Life and ... Ghosts? by Kitty French
The Berlin Conspiracy by Tom Gabbay
The Lonely Sea by Alistair MacLean
Cream Puff Murder by Fluke, Joanne
Sunshine and the Shadowmaster by CHRISTINE RIMMER
FlavorfulSeductions by Patti Shenberger
Our partner