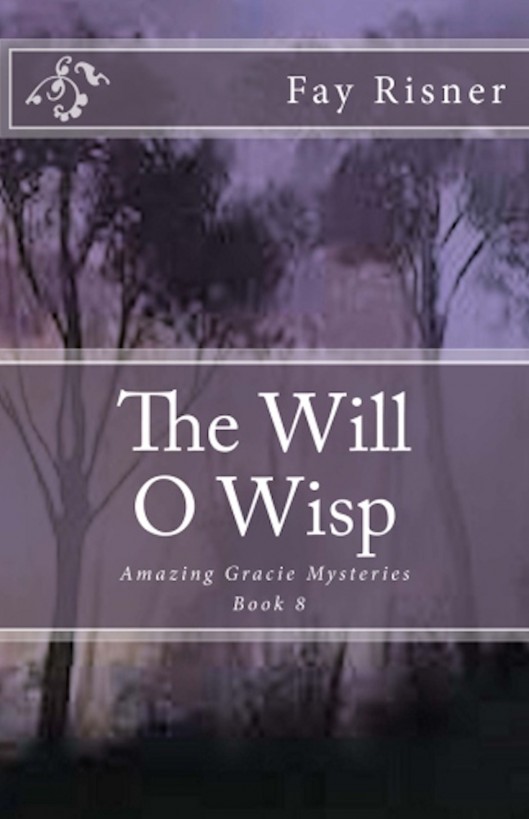 The
Will O Wisps

Published by Fay Risner at
Smashwords

This ebook is licensed for your
personal enjoyment only. This ebook may not be re-sold or given
away to other people. If you would like to share this book with
another person, please purchase an additional copy for each
recipient. If you’re reading this book and did not purchase it or
it was not purchased for your use only, then please return to
Smashwords.com and purchase your own copy. Thank you for respecting
the hard work of this author. All Rights Reserved 2015

This is a work of fiction.
Names, characters, places and incidents are either the product of
the author’s imagination or used fictitiously, and any resemblance
to the actual persons, living or dead, business establishments,
events or locals are entirely coincidental. Excerpts from this book
cannot be used without written permission from the
author. I entered in the National
November Write Month contest in November 2014 and made it over the
finish line with over 50,000 words in three weeks. This is my fifth
year to enter.

Amazing Gracie Mystery
Series-I highly recommend this series to anyone who has ever known
or had a nosy elderly neighbor that seemed to ALWAYS know what is
going on.

Agatha Christie at a
nursing home meets Little House On The Prairie. This review is from
Luv2read in the Kindle section for Neighbor Watchers.  I loved
this book!  The characters were so well written, it was easy
to see it played out in my head as I read. Gracie was my great
grandmother and Sam Elliot was the sheriff. Ha! Gracie &
Melinda get into quite a few predicaments trying to "Help" solve
the murder across the street.  It kept me turning the page
(clicking my kindle button) to find out what mischief these two
adorable old ladies would get into next. This is a funny laugh out
loud easy read. The books are really unique as the time period is
the turn of the century.
Specious Nephew
Fay has created another mystery that is hard to put down.  She
has a talent for telling the story with words that make you feel
the sights, sounds and events of that period.  I love the
characters from Moser Mansion Rest Home.
The County Seat Killer
Once I was introduced to the characters I could hardly put the book
down.  The women of Moser Mansion rest home are such endearing
characters and the story is a good crime mystery read.  I
truly enjoyed it.
The Chance Of A Sparrow
Gracie is quite a character - the Miss Marple - of her geological
locale.
Another great book.  I enjoyed it.  Gracie is so
personable and you take me right there with her.
Fay has told another entertaining story in her Amazing Gracie
Mystery Series.  The trip back to the farm at Three Oaks
provides another mystery and it's a good read right up to the end
of the story.

Nurse Hal Among The Amish
Series

A Promise Is A Promise

As Her Name Is So Is Redbird

The Chance Of A Sparrow

The Will O Wisp

The Dark Wind Howls Over Mary

My Children Are More Precious Than
Gold

Listen To Me Honey

Sunset Til Sunrise On Buttercup Lane by Connie
Risner

One afternoon, Shana came home from
school through the mansion's back door. She plopped her homework on
the library table and walked out on the front porch, letting the
screen door slam behind her. When she flopped down on the rocker
beside Gracie Evans, her flaming red pigtails bounced.

Gracie, a resident at Moser Mansion
Rest Home For Women, flinched at the loud noise. She lowered the
Locked Rock Review newspaper and stared over her gold rim glasses
at the girl. “Do you mind, youngun? I'm trying to read the
newspaper.” Gracie gruffly admonished the girl and returned to
reading the newspaper.

The child gave Gracie a woeful look.
“Sorry tis I. I'm in need a favor, Miss Gracie. Could you see your
way clear to lend me a penny? I will repay you as soon as it comes
up a rainstorm.”

Gracie tucked a few stray hairs back
over her left ear toward the gray braid wound around her head and
focused on the girl once more. “Come again. Why do I have to wait
for a storm to get my money back? Better yet, why do you need to
borrow the money in the first place?”

“
Well, tis like this. Mikie
Brown says I should put the penny in the yard when it rains. When
the lightning strikes it, the penny will be worth six cents,” Shana
told her earnestly.

“
That Brown boy is just
like the rest of Maudie's younguns. He doesn't know nothing. I
suppose he told you to stick that penny in his yard and go off and
leave it,” Gracie said. “I guarantee that penny wouldn't stay put
until the next rain storm if you did.”

“
Mikie does know something.
He's been around plenty,” Shana defended huffily.

“
Not enough for me to waste
my money on his say so. If you're so sure he's right, you ask Mr.
Orie for the penny. See how far that gets you,” Gracie
advised.

Down faced, Shana leaned back in the
rocker. “If you say so, then so be it. I'll be sure to think about
it.”

That was just one time that Shana
tried to use her Irish wiles on someone. Another instance was when
Gracie and Melinda went for their daily walk. They passed Sam and
Veder Jeffer's house. Shana sitting in the grass on the front lawn
with Johnny Jeffer. The boy happened to be a couple of years
younger than her.

As the women approached, they
overheard Shana say, “Johnny me boy, I'll trade you even up this
tobacco sack full of licorice whip seed for that ball and jack
set.”

“
I don't know about that,”
Johnny said slowly. “I just got this for Christmas, and I like my
ball and jack set. Besides, isn't licorice whip a
candy?”

“
I'm after tellin' you a
fact. Just think how many licorice whip sticks you will have once
you plant the seed in this sack. It grows fast. To be sure, you can
sell the extra sticks to others to make money,” Shana said. “That
makes my sack of seed a great bargain.”

“
Let me think on it some,”
Johnny said reluctantly.

Gracie stopped behind Shana. “Little
Missy, how about you walk back home with Melinda and me. I want to
talk to you right now.”

“
Be seeing you later,
Johnny, after you have thought about the trade some more,” Shana
said as she joined Gracie and Melinda Applegate. The curly haired
woman was another resident of Moser Mansion. Though she managed to
remain a friend to the outspoken Gracie, Melinda was the total
opposite with her quiet voice and genteel manners.

When they got out of earshot of
Johnny, Gracie asked, “Where did you get a cloth tobacco sack like
that one? You take up smoking a pipe now?”

“
The thought never entered
me mind,” said Shana, sounding offended. “Mr. Bullock gave me the
empty sack. He said he had plenty more.”

“
He is and generous to a
fault, but I doubt Shana told him what she intended to do with his
empty sack,” Gracie said, looking down her nose at
Shana.

Melinda looked confused. “I've never
heard of licorice seed before. Let alone a variety of licorice whip
candy that grows like a plant. Have you, Gracie?”

Gracie shook her head. “Melinda,
listen to yourself. Licorice whip is a candy.”

“
Of course, it is.” She
looked up at the sky. “Lord, you ever seen such a fool? You're
looking at one right now. I was taken in by this child I guess,”
Melinda said.

“
Seems as though this girl
has that effect on most everyone these days. She's getting good at
it. That don't mean you're stupid. You just have bad luck when it
comes to thinking sometimes.” Gracie turned her attention on Shana.
“Tell Melinda, is that really licorice seed in that bag,
youngun?”

Shana mulled her answer over for a
moment.

“
If you're figuring on
lying to us, I wouldn't advise it,” Gracie said sternly.

Shana kicked at a clod of dirt in
front of her. “Nah, I'd never think of doin' that. Sure and it's
really black pepper in the bag.”

“
Where did you get that
much black pepper?” Gracie asked.

“
Out of the pepper shaker
on the kitchen table,” Shana said begrudgingly.

Melinda eyed the full cloth tobacco
sack. “Is there that much pepper in one little shaker?”

“
Not really,” Shana said
slowly. “I dumped the fancy dishes shaker in the china cupboard as
well.”

“
You stole all that
pepper,” Gracie accused. “That ain't a bit honest.”

“
Agnes can refill the
pepper shakers,” Shana excused with a shrug.

“
More to the point is the
flimflam you tried to pull on that little boy to get his jack set.
Poor Johnny.” Melinda tisked as she shook her head disapprovingly
at Shana.

A Man to Believe In by Deborah Harmse
Zoe Sophia's Scrapbook by Claudia Mauner
Satin Island by Tom McCarthy
Of Ashes and Rivers that Run to the Sea by Marie Munkara
Intertextuality and the Reading of Midrash by Daniel Boyarin
The Galileans: A Novel of Mary Magdalene by Frank G. Slaughter
An Unexpected Love Story (Love Story Book Two) by Schurig, Rachel
Hardboiled & Hard Luck by Banana Yoshimoto
Danger Zone by Dee J. Adams
Southern Discomfort by Margaret Maron
Our partner